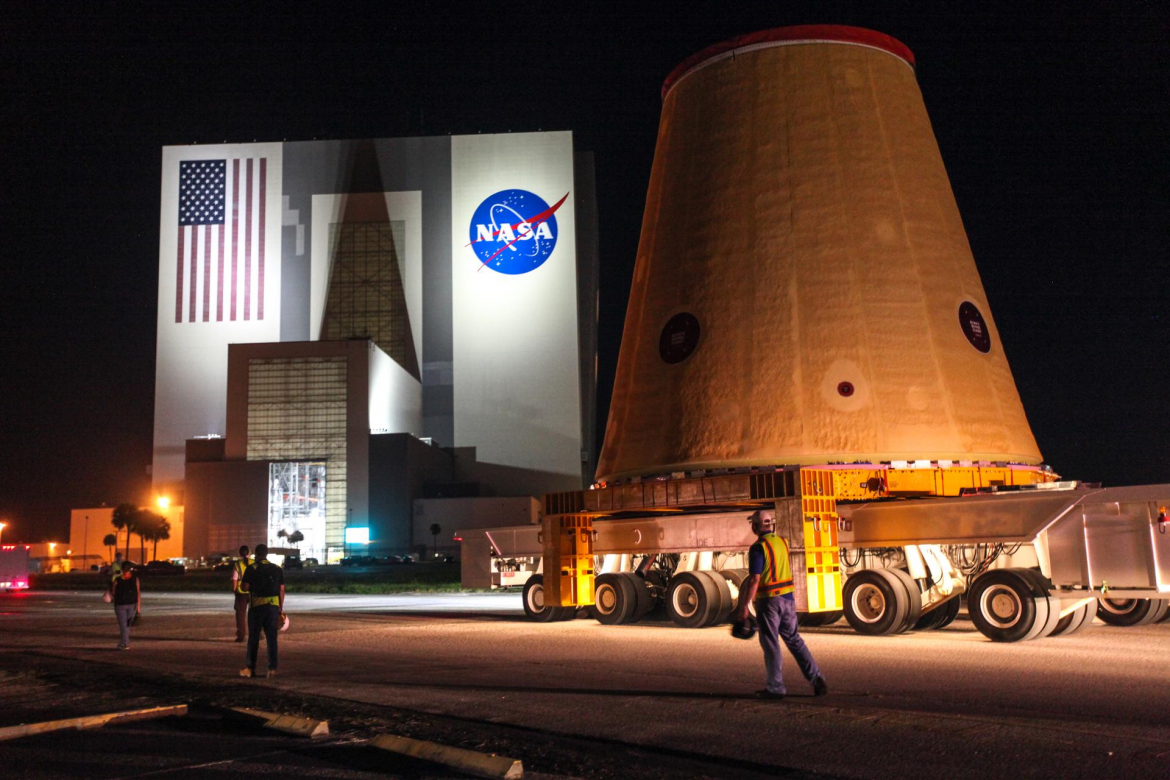 “The same with testing the … nozzle extension and deployment related for the RL-10 engine.” The stage uses Aerojet Rocketdyne’s RL-10B-2 engine, which has a nozzle extension that deploysin-flight. The nozzle extension will be retracted into its stowed, launch configuration prior to stacking operations.

The Orion Stage Adaptor remains in the former Space Station Processing Facility; it will carry thirteen cubesats as secondary payloads when the ICPS sends Orion on its translunar trajectory for Artemis 1. The Orion Stage Adaptor will remain attached to the ICPS when Orion separates from the upper stage; the adapter has a payload deployment system that will begin deploying the cubesats post Orion separation.

EGS and Jacobs are getting the Orion Stage Adaptor ready for installation of the cubesats. “We have two more tasks to complete before it is ready for cubesat installation,” Mjoen explained.  But first is one more functional checkout of the deployment system.

Mjoen noted that the cubesat secondary payloads will be closed out for installation and delivered to KSC “just in time” for launch vehicle integration. “They’re one of the last offline operations that we’ll perform. There’s thirteen cubesat payloads and basically there’s adapter brackets inside the Orion Stage Adaptor where we will install those, and they’re basically individual spacecraft that are NASA research experiments.” 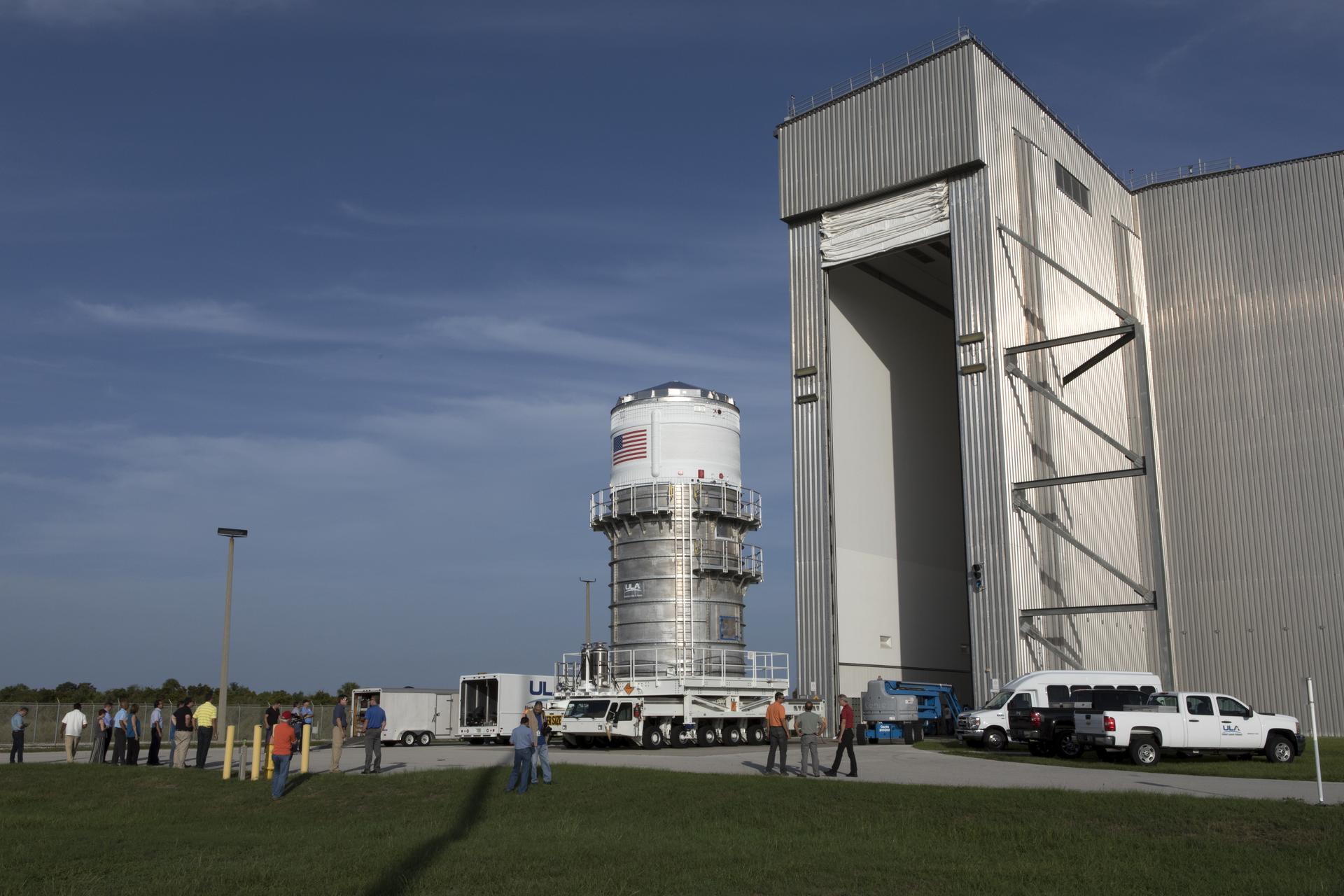 (Photo Caption: The ICPS for Artemis 1 leaving the Delta Operations Center in July, 2017, for storage at KSC. The stage was recently returned from the Space Station Processing Facility to the DOC for periodic maintenance and final offline preparations for launch. It will go to a NASA KSC building where its attitude control system propellant will be loaded before heading to the VAB to be lifted up and stacked on top of the LVSA.)

“We install those in those locations, and they have batteries associated with them that we need to charge,” she noted. “We want to conserve that battery life, so we charge [them] as late in the offline flow as we can before it gets moved over to the VAB and stacked.  Because once Orion is installed on top of the Orion Stage Adapter, we lose the access to be able to install those payloads.”

Integrated operations to assemble the vehicle next year

The LVSA’s turn in the vehicle integration process will arrive once the Core Stage is mated to the SLS Boosters on Mobile Launcher-1, which is set up in VAB High Bay 3 for stacking. Once the Core Stage schedule is better understood, stacking of the boosters can begin and work can resume on the Orion spacecraft.

The Artemis 1 Orion is currently in the Armstrong Operations and Checkout building at KSC; once work resumes, Lockheed Martin will finish final closeouts and officially turn the spacecraft over to EGS. It will be moved to the Multi-Payload Processing Facility (MPPF) where it will be loaded with propellant, fluids, and other commodities for flight.

Waiting in line behind Orion is the ICPS; after Orion leaves the MPPF, the upper stage will be moved there. “When [the ICPS] comes back to us it’s going to be going to the MPPF.” Mjoen said.

“The ICPS has two tanks that will have hydrazine in them, and that’s where we do that operation where we load those tanks prior to going over to the VAB where it will then we stacked on top of [LVSA].” 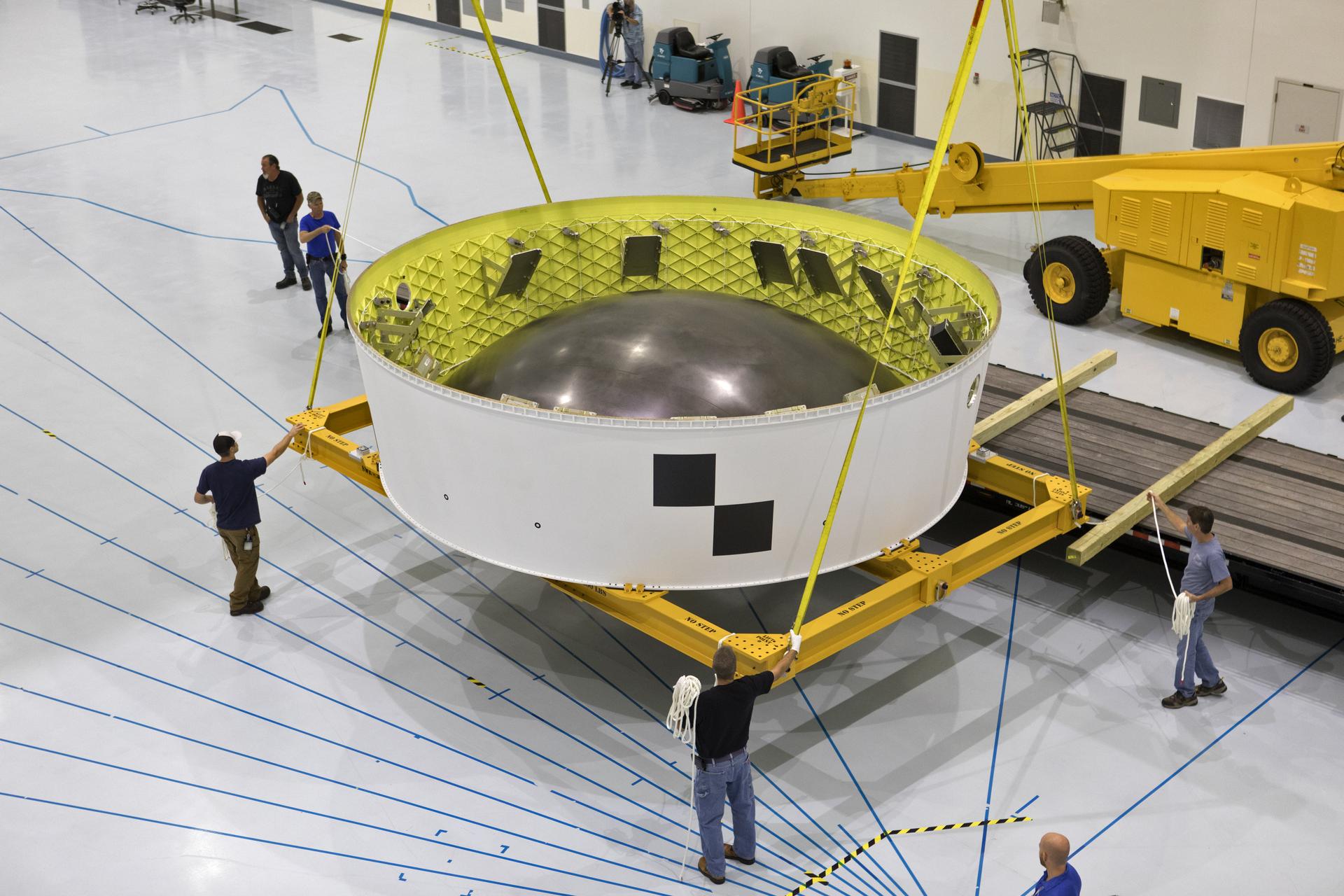 (Photo Caption: The Orion Stage Adapter (OSA) is received in the SSPF in April, 2018. The OSA connects the SLS Block 1 ICPS upper stage with an Orion spacecraft. Thirteen cubesat secondary payloads will fly with Orion towards the Moon on Artemis 1; about half of the dispensers that ring the inside of the adapter can be seen in this image.)

By the time the ICPS attitude control system hydrazine tanks are loaded and the stage is ready to be moved to the VAB for stacking, the LVSA should be in place on top of the Core Stage. The bottom of the adapter will be bolted to the top of the forward skirt by way of flanges on each side. Three-hundred sixty bolts at one-degree intervals will join the flanges.

A temporary enclosure will be set up to apply additional spray-on foam insulation over the bolted flange.  The foam will be applied manually as was done with the LVSA.

Once fully-integrated, Orion and SLS will go through an integrated checkout in the VAB with each other, the Mobile Launcher, and the Launch Control Center to verify connections for command and control and data are functioning properly. After the checkout, the vehicle will be prepared to roll out to Launch Pad 39B for the first time for a Wet Dress Rehearsal.

One of the tasks to prepare for that test will be to change out ICPS electronics boxes. A fresh set of ICPS avionics and batteries will replace the set used for the integrated checkout. “When ICPS comes back to us [from the Delta Operations Center], it has an Inertial Navigation Control Assembly that’s rated for flight, but it’s not going to be the one that will fly,” Mjoen explained. “We’ll be using those [computers and batteries] as test articles to buy off a lot of our requirements and end to end testing of the systems.”

The work platforms inside the LVSA will provide access to theInertial Navigation Control Assembly flight computer and battery locations on the ICPS equipment shelf and an avionics handling tool will be used to carefully transfer the equipment in and out of the LVSA to perform the component removal and replacement for flight. “We will use that avionics handling tool to remove and replace those test units with our final one that we’re going to be using for flight just prior to WDR.”