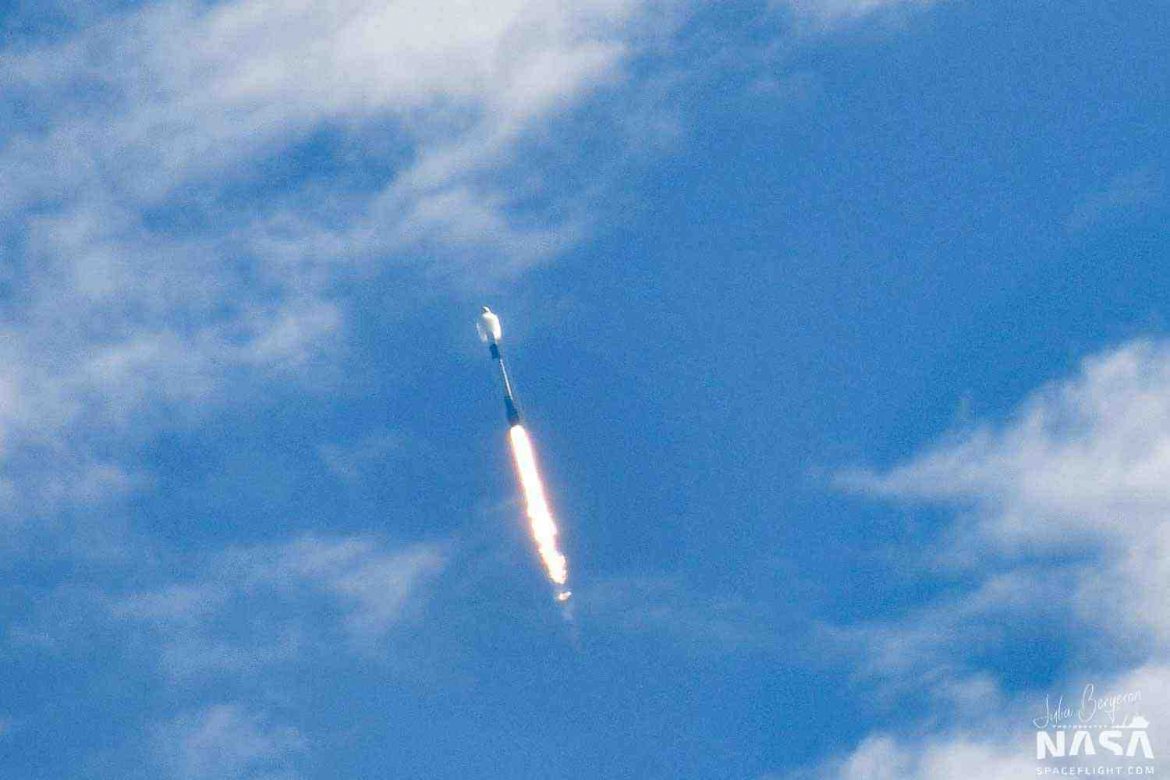 SpaceX has broken another reuse record on the Starlink v1.0 L10 mission. For the first time, a Falcon 9 first stage has launched a sixth mission, this one carrying three rideshare payloads along with a batch of Starlink satellites.

Liftoff of the eleventh overall Starlink mission, and the tenth launch of the Version 1.0 satellites, occurred at 10:31 AM EDT (14:31 UTC) on Tuesday, August 18. The 45th Space Wing predicted an 80% chance of favorable weather for the launch.

Had the launch been delayed due to weather, a technical issue, or anything else, there was a backup launch opportunity available on Wednesday. An 80% chance of acceptable weather was also predicted for the backup date, but launch occurred as planned on Tuesday.

On board the flight were 58 of SpaceX’s Starlink internet satellites, which have now joined the 531 v1.0 satellites already on orbit. 535 of the v1.0 satellites have been launched prior to Tuesday’s launch, with four having destructively reentered, as designed, after encountering issues after launch.

The fleet of test satellites which informed the v1.0 design are also currently in the process of being deorbited for destructive reentries. The Tintin B satellite, one of two Tintin test satellites launched in 2018, reentered on August 8. Tintin A’s orbit is also decaying and expected to reenter Earth’s atmosphere in the near future.

Of the 60 v0.9 satellites launched in 2019, four have reentered to date, with the remaining 56 either actively deorbiting or naturally decaying. The Tintin and v0.9 satellites will not be part of the operational Starlink satellite constellation.

Joining the 58 Starlink v1.0 satellites on this launch were three SkySat Earth observation satellites for Planet Labs. The SkySat 19, 20, and 21 satellites will orbit Earth at 53 degrees inclination, enabling imaging of Earth between 53 degrees north and 53 degrees south latitude. These satellites will complement Planet’s fleet of satellites in Sun Synchronous Orbit. 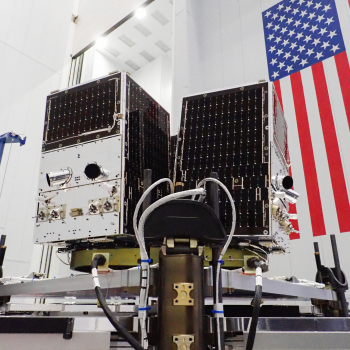 The three SkySat rideshare payloads prior to encapsulation – via SpaceX

Other SkySats have launched on the Indian PSLV, Arianespace Vega, and Northrop Grumman Minotaur-C launch vehicles. The SkySat constellation was originally operated by Skybox Imaging, which was renamed Terra Bella before being acquired by Planet Labs in 2017.

The launch carrying the newest additions to the SkySat constellation utilized the B1049.6 Falcon 9 booster. This is the first time that a Falcon core has flown a sixth mission, having also launched the Telstar 18 Vantage mission and the first, third, and eighth Starlink missions from SLC-40 in Florida. B1049 also launched the Iridium NEXT 8 mission from SLC-4E at Vandenberg Air Force Base in California.

The eleventh Starlink mission launched from SLC-40 at Cape Canaveral Air Force Station, where B1049.6 completed a successful static fire test on August 17. After launch, the booster successfully landed on the Of Course I Still Love You drone ship for a fourth time, about 634 kilometers downrange in the Atlantic Ocean. This was B1049’s sixth landing, including two landings on Just Read the Instructions. 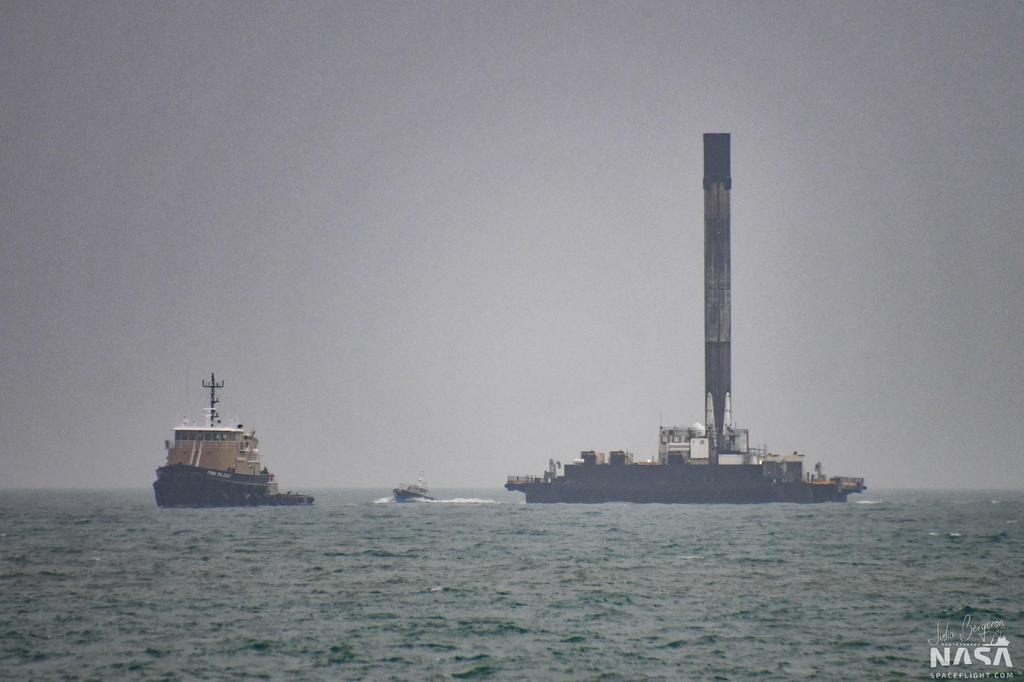 A successful launch and landing puts B1049 in line to continue breaking records by flying a seventh mission.

In addition to a reused first stage, the payload fairing for this launch has flown before on the fourth Starlink mission. On that mission, one fairing half was caught on board the GO Ms. Tree recovery vessel, while the other was recovered after a soft splashdown by GO Ms. Chief. Both GO Ms. Tree and GO Ms. Chief are positioned downrange again for recovery efforts on the eleventh Starlink mission.

Seven minutes before liftoff, the nine Merlin 1D engines on the first stage are chilled in order to thermally condition the engines for ignition. One minute before launch, Falcon 9 enters startup, and begins pressurizing the vehicle’s propellant tanks to flight levels.

At T- 45 seconds, the SpaceX Launch Director gives a final verification that all systems are go for launch. Three seconds before liftoff, the nine Merlin 1D engines are commanded to begin the ignition sequence.

After lifting off from SLC-40, Falcon 9 pitches downrange to begin acquiring the horizontal velocity needed to achieve orbit. At T+ one minute and 12 seconds, the vehicles reaches the point of maximum dynamic pressure, or “Max Q,” where the aerodynamic stresses on the vehicle reaches its peak. Prior to this point, stresses are steadily increasing as the rocket accelerates to greater velocities, but after Max Q, the thinning atmosphere at higher altitudes result in decreasing forces on the vehicle.

The first stage engines shut down two minutes and 33 seconds after launch. The first and second stages then separate, and the Merlin Vacuum engine on the second stage ignites at T+ two minutes, 43 seconds. The reused payload fairing is jettisoned at T+ three minutes and 12 seconds.

A fairing recovery attempt was made about 45 minutes after launch. One fairing half was successfully caught aboard GO Ms. Tree, while the other made a soft splashdown and was recovered by GO Ms. Chief.

As the second stage accelerates towards orbital velocity, the flight proven first stage completes a reentry burn at T+ seven minutes and two seconds. B1049 then touches down aboard Of Course I Still Love You at T+ eight minutes and 42 seconds, just nine seconds before the second stage shuts down in orbit.

And that's a record sixth landing for the same Falcon 9 booster (B1049.6)! pic.twitter.com/LlfAAOVES5

After a brief coast phase, the three SkySat rideshare payloads are deployed at T+ 12:32, T+ 13:02, and T+ 13:32 respectively. The second stage then coasts until 45 minutes and 57 seconds after liftoff before deploying the stack of 58 Starlink satellites.

Following the completion of the Starlink v1.0 L10 mission, SpaceX turns their focus towards an upcoming manifest which includes launching the SAOCOM-1B satellite for CONAE. This launch will be the first to utilize the polar launch corridor since 1960, and is scheduled for no earlier than August 27 pending the launch of a ULA Delta IV Heavy carrying the NROL-44 mission no earlier than August 26.

Other upcoming SpaceX missions include the SXM-7 and GPS-III-SV04 satellites, the first operational Crew Dragon mission, and more Starlink launches.