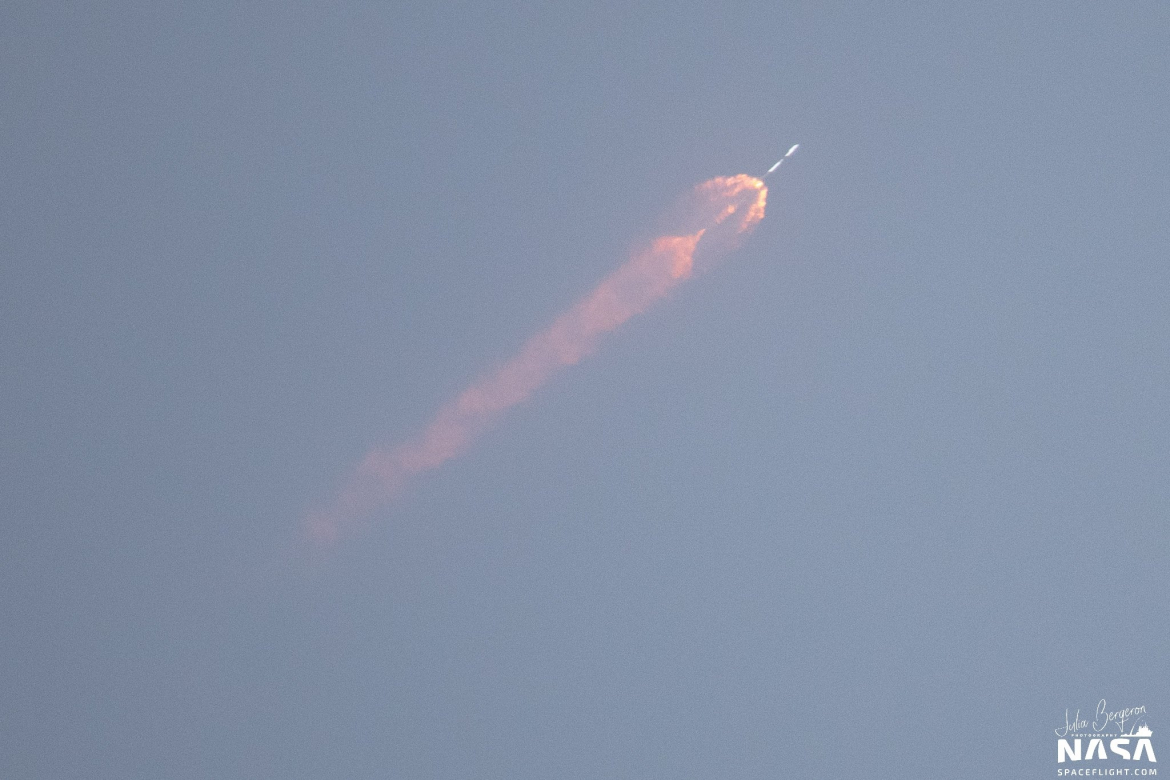 SpaceX has conducted the first polar launch from Florida since 1969. On board the Falcon 9 rocket was the Argentinean SAOCOM-1B satellite and two American secondary payloads. Liftoff from Space Launch Complex 40 (SLC-40) occurred at 7:18 PM EDT (23:18 UTC) on Sunday.

The 45th Weather Squadron predicted a 40% chance of acceptable weather for Sunday’s launch window. However, SpaceX managed to find a gap in the weather to launch on time.

Unlike most launches from Cape Canaveral, which take advantage of the Earth’s spin in order to reach low inclination orbits, the SAOCOM-1B mission flew southward, along the east coast of Florida, along a flight path known as the polar corridor. This was the first mission to launch to polar orbit from Florida since February 26, 1969, when a Delta E1 rocket launched the ESSA-9 meteorology satellite.

SAOCOM-1B was deployed into a Sun Synchronous Polar orbit, inclined 97.9 degrees at an altitude of 620 kilometers. The satellite will compliment the SAOCOM-1A satellite, which was also launched aboard a SpaceX Falcon 9 from Vandenberg Air Force Base, California, on October 7, 2018. 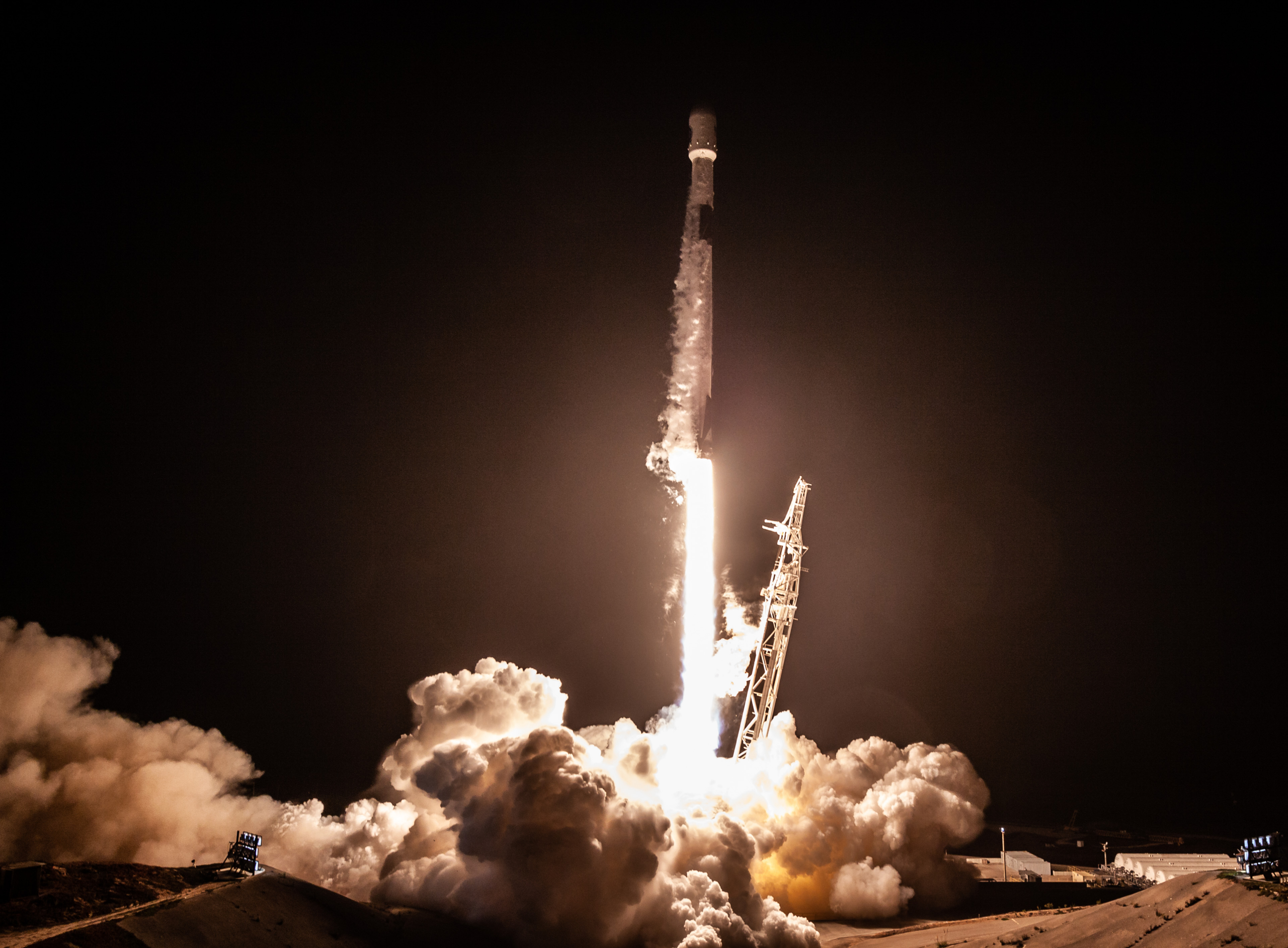 Falcon 9 launches the SAOCOM-1A mission from SLC-4E, Vandenberg Air Force Base, California on October 7, 2018 – via SpaceX

Vandenberg has been the regular launch site for missions to polar orbits, which orbit Earth over the poles, aligned north to south. Vandenberg is preferable for these launches as the Pacific Ocean offers an unpopulated area directly south of the launch site, minimizing risk to public safety in the unlikely event of a launch failure. SpaceX continues to operate Space Launch Complex 4 East (SLC-4E) at Vandenberg, and still plans to launch missions from California, including the Sentinel-6A mission for NASA no earlier than November 2020.

However, in order to enable more frequent launches to polar orbits, SpaceX has worked with the US Space Force’s 45th Space Wing, which controls the eastern range including Cape Canaveral, to resume polar launches from Florida as well. Cape Canaveral is located closer to the equator than Vandenberg, which is beneficial for rocket performance to low inclination orbits but worsens performance to high inclination orbits such as Sun Synchronous Orbit.

Unlike launches from Vandenberg, launching directly to a polar inclination from Florida would result in overflying populated areas of Florida. Therefore, Falcon 9 initially flew southeast along the coast of Florida. After stage separation, the second stage performed a “dogleg” turn to the south to achieve the proper inclination.

While this avoided overflying Florida, it resulted in the second stage and its payloads flying over Cuba. However, at this point in flight, the vehicle was much higher, and the risk from falling debris from a potential anomaly was much lower than during the earlier phases of flight.

The risk of an early flight failure was a major consideration in scheduling the SAOCOM-1B launch. Due to the unique flight path, Falcon 9 nearly overflew the Cape Canaveral launch pads to the south of SLC-40, which includes SLC-37B, where a United Launch Alliance Delta IV Heavy rocket and its valuable, classified NROL-44 payload currently stand.

While both ULA and SpaceX have agreed to allow launches to the polar corridor to overfly each other’s pads (Polar ULA Atlas V launches from SLC-41 would overfly SpaceX at SLC-40), the National Reconnaissance Office had specially requested that SAOCOM-1B not be launched while the NROL-44 payload is at SLC-37B.

So when the Saturday morning launch attempt for NROL-44 was aborted just seconds before liftoff, it was believed that SAOCOM-1B would be delayed in order to wait its turn. However, the NRO reevaluated the risk from a nearby overflight, and granted SpaceX permission to launch SAOCOM-1B while NROL-44 is still on the ground. This may have been influenced by the minimum seven-day delay to NROL-44’s liftoff.

The SAOCOM-1B spacecraft was initially shipped to the launch site on February 22, 2020. Initially scheduled or a launch in spring, the mission was indefinitely delayed due to the COVID-19 pandemic, which prevented CONAE team members from travelling to Florida to support the launch.

The 1600-kilogram satellite is operated by CONAE, Argentina’s government space agency. The pair of SAOCOM-1 satellites carry L-band Synthetic Aperture Radar (SAR) instruments to measure soil moisture and other parameters in support of emergency response and disaster relief. The SAOCOM constellation will work in cooperation with the four Italian COSMO-SkyMed satellites.

The second rideshare payload on board was Tyvak-0172, a satellite from Tyvak Nano-Satellite Systems. Details on the size and mission of this satellite are unknown.

The SAOCOM-1B launch was also the one hundredth ever launch for the Falcon family, including the Falcon 1 and Falcon Heavy rockets. Also notable is the stage one landing, which occurred at Landing Zone 1 (LZ-1) at Cape Canaveral, not a drone ship in the ocean. This was the first Return to Launch Site (RTLS) landing since the CRS-20 mission on March 7, 2020.

LANDED IT. The 100th SpaceX launch has seen another booster life saved with a RTLS (Return To Launch Site) at LZ-1.

Fourth landing for this booster! pic.twitter.com/444Ppbool3

The booster that performed that landing was the same first stage launching SAOCOM-1B. B1059.4 previously launched the CRS-19, CRS-20, and Starlink v1.0 L10 missions.

In addition to stage one recovery, the SpaceX fairing recovery vessel GO Ms. Chief is stationed downrange, west of The Bahamas, to attempt to catch one half of the payload fairing. The other half will be recovered after a soft splashdown. Both halves cannot be caught due to the other recovery vessel, GO Ms. Tree, being stationed northeast of Cape Canaveral for the Starlink v1.0 L11 mission. That recovery attempt will occur approximately 45 minutes after launch, weather conditions permitting.