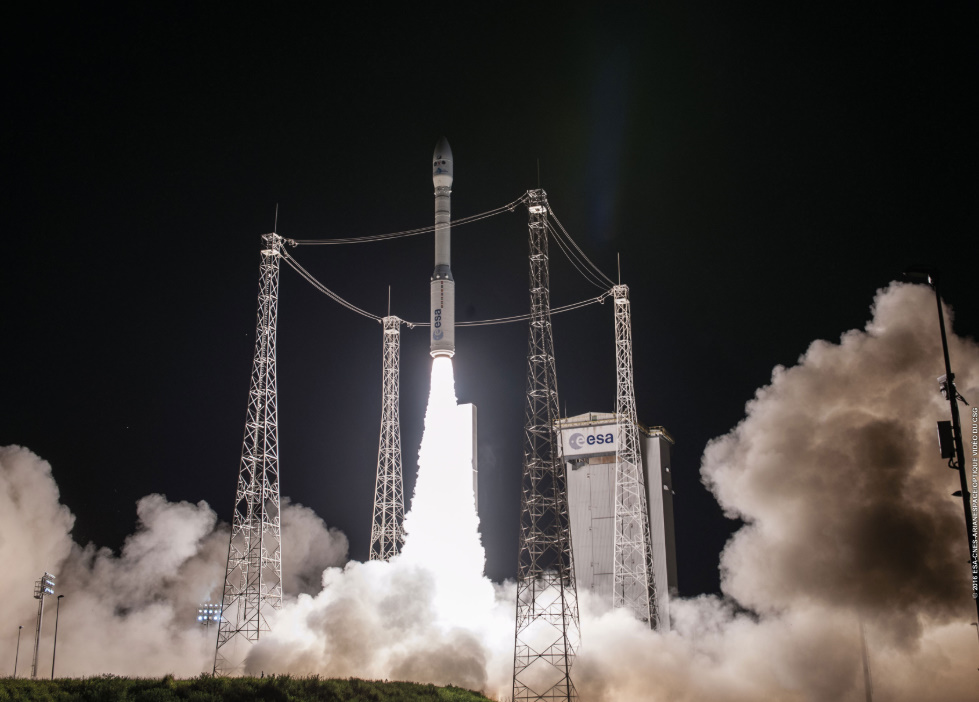 After a lengthy grounding following a failed launch in July 2019, the closure of the Guiana Space Centre due to the novel coronavirus outbreak, and a further postponement because of high-altitude winds, Arianespace’s small-lift Vega rocket finally launched on its Return To Flight (RTF) mission. Postponed on Tuesday due to the storm track of Typhoon Maysak over South Korea, where the Jeju telemetry station is located, Wednesday night/Thursday morning proved to be the right time for Vega to return to space.

The flight involved 53 satellites deployed for 21 customers hailing from 13 countries around the world, launching from the Vega Launch Complex (SLV) at the Guiana Space Centre in Kourou, French Guiana.

Arianespace currently operates and launches three launch vehicles at the Guiana Space Centre: the light-lift Vega, the medium-lift Soyuz launcher (procured via an agreement with the Russian Space Agency, Roscosmos), and the heavy-lift Ariane 5 rocket. Arianespace also offers commercial Soyuz launches from the Baikonur Cosmodrome in Kazakhstan via the Starsem company.

The Vega launcher, manufactured and delivered to Arianespace by Avio, is a four-stage orbital rocket that was first developed in 1998 and debuted in February 2012 with the successful launch of the VV01 mission. It stands at 30 meters (98 feet) tall and 3 meters (9.8 feet) at its widest and is capable of delivering up to 1,430 kilograms (3,150 pounds) of payload to a 700 kilometer (435 mile) polar orbit.

Following the success of its maiden flight in 2012, Vega enjoyed a perfect success rate for 13 launches afterward. However, Vega experienced its first failure on July 11, 2019, during the launch of the Falcon Eye 1 Earth observation spacecraft for the United Arab Emirates as part of the VV15 mission.

An inquiry into the anomalous launch discovered that a structural failure occurred in the forward dome of the Zefiro 23 second stage solid rocket motor during powered flight, caused by a thermal protection design flaw that allowed heated gas to leak into the critical structure. This subsequently led to the destruction of the vehicle and the loss of the Falcon Eye 1 satellite around 2 minutes after liftoff.

Arianespace has since addressed the cause by adding more thermal protection to the Zefiro 23 forward dome, along with other counter-measures. The Falcon Eye 2 spacecraft, previously slated to launch on a Vega rocket, has now been allocated to the medium-lift Soyuz for a launch at a later date.

After being grounded for several months due to the investigation into the VV15 failure, Vega was set to return to action in March of 2020 with the launch of the Small Spacecraft Mission Service (SSMS) Proof Of Concept (POC) flight for the European Space Agency (ESA). However, on March 16, all mission operations were halted and the Guiana Space Centre was temporarily closed just days before launch due to the spread of the novel coronavirus in the local area. All payloads were placed in safe mode until the reopening of the space centre and the resumption of the VV16 launch campaign on May 27.

The Small Spacecraft Mission Service (SSMS) program was created by ESA in cooperation with the European Union, which provided funding for hardware development and the initial “Proof Of Concept” (POC) mission. The program was started to help bolster Arianespace’s response to the rideshare demands of the ever-growing small satellite launch market.

The service leverages on the flexibility of a modular dispenser concept, which can provide an interface to small satellites ranging in size from 1 kilogram (2.2 pounds) to 500 kilograms (1,102 pounds) in several configurations based on similar structural elements. 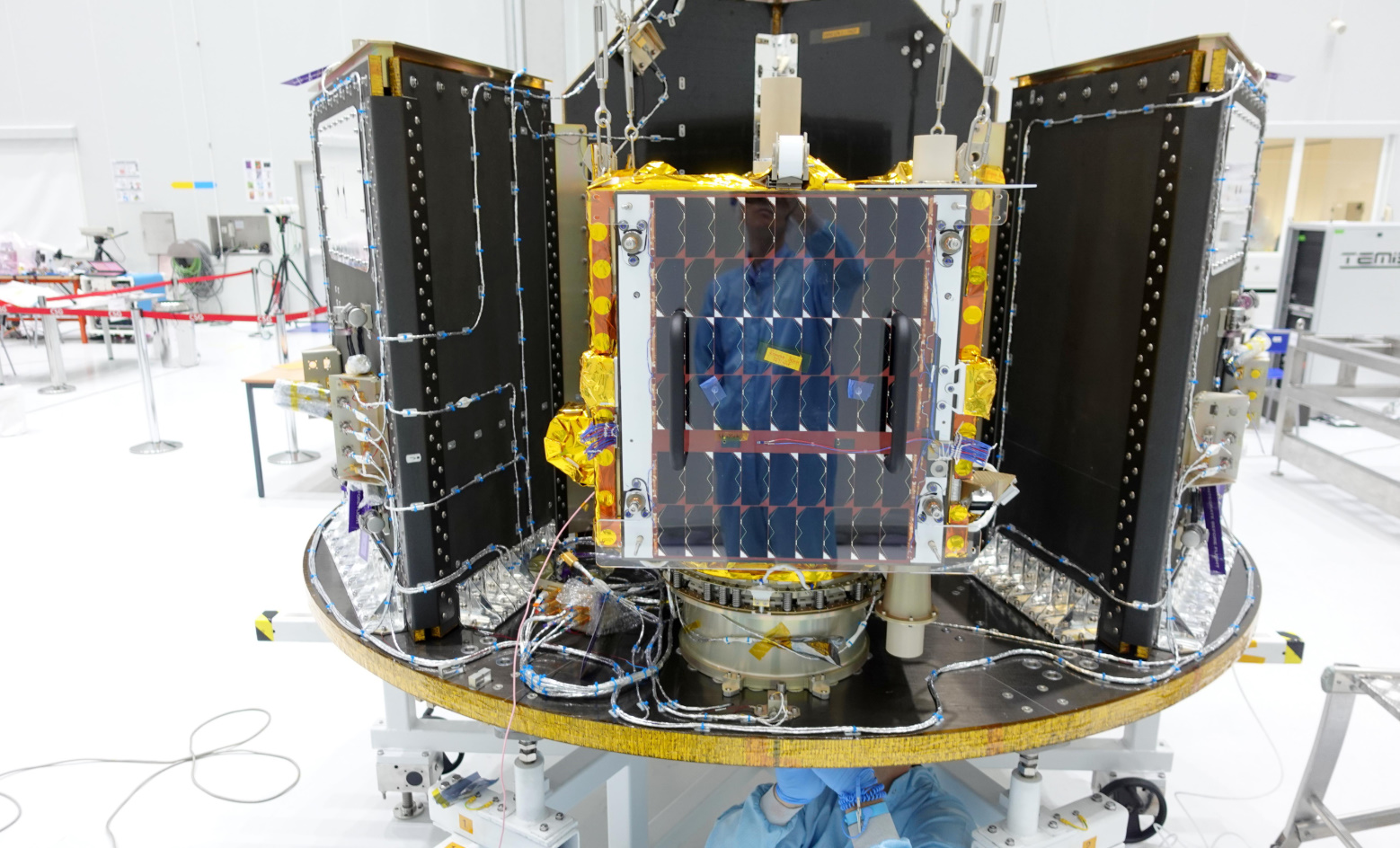 The concept for the SSMS platform was created by Avio, the prime contractor for the Vega rocket. SAB Aerospace – an Italian independent SME (small/medium enterprise) – was responsible for the design authority of the SSMS.

For the Vega VV16/Proof Of Concept mission, the SSMS dispenser is in the “Flexi-3” configuration, which is able to host microsatellites on its upper portion and CubeSats on its lower hexagonal module.

Arianespace launched 53 payloads on the Vega VV16/SSMS POC flight, with a total of 21 customers from 13 nations around the globe taking part. This mission will serve many different types of applications: Earth observation, sciences, telecommunications, technology demonstration and education, and more.

Seven microsatellites were transported on the upper portion of the SSMS dispenser, with 46 smaller CubeSats hitching a ride on the lower Hexamodule. When combined with the mass of the dispenser, the total launch mass for the Vega VV16 mission adds up to 1,310 kilograms (2,888 pounds) of payload.

All 53 satellites were launched to a 97-degree Sun-synchronous orbit (SSO), which is a nearly polar orbit over a planet that allows a spacecraft to pass over a given point on the planet’s surface at the same meantime. This orbit is useful for Earth observation, as satellites can accurately monitor changes on the surface as time passes.

Following liftoff at T-0 seconds from the Vega Launch Complex (SLV) at the Guiana Space Centre, the rocket’s P80 first stage solid rocket motor continued to burn until the T+1 minute 54 second mark. At that point, the Zefiro 23 second stage separated, with engine ignition occurring shortly after. Zefiro 23 burnout and separation took place at about 3 minutes and 37 seconds into the flight.

Following second stage separation, the Zefiro 9 third stage solid rocket motor ignited at the T+3 minutes and 50 second mark. This stage will continue burning for another 2 minutes and 40 seconds, with burnout and separation taking place at T+6:30.

During the powered phase of Zefiro 9’s flight, Vega’s protective payload fairing deployed, exposing the SSMS dispenser and its payloads to the vacuum of space. Fairing separation occurred at around 3 minutes and 55 seconds into the flight.

At T+7 minutes and 54 seconds, the AVUM upper stage ignited its single RD-843 engine for the first of four burns scheduled for the VV16 mission. The AVUM is fueled by unsymmetrical dimethylhydrazine (UDMH) and dinitrogen tetroxide (N2O4) and is capable of 667 seconds of total burn time. 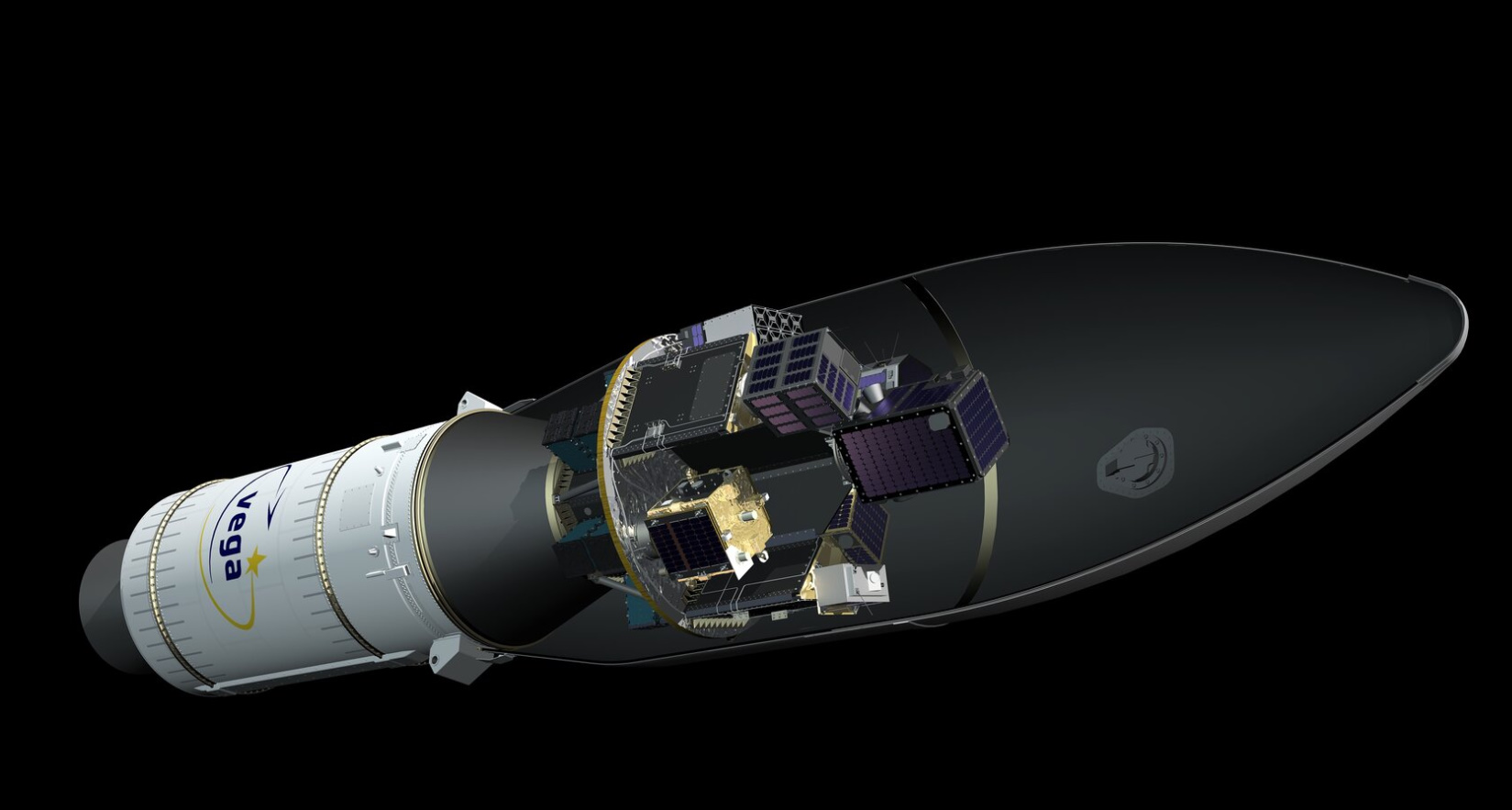 After conducting an eight-minute burn, the AVUM upper stage and SSMS dispenser entered a 23 minute and 37 second-long ballistic coast phase before igniting its engine once again for a short duration to enter a 315 x 315 kilometer (195.7 x 195.7 mile) Sun-synchronous orbit.

At approximately 40 minutes and 25 seconds after liftoff, the first of 53 satellites separated from the SSMS dispenser. Per the official mission timeline, this was a Spaceflight, Inc. microsatellite that will host an experimental communications system. The name of the satellite has not been disclosed.

The NEMO-HD and UPMSAT-2 satellites deployed approximately two seconds later. NEMO-HD is the first satellite built and launched by the nation of Slovenia and will observe the Earth by combining interactive real-time video streaming and multispectral imaging. UPMSAT-2, a technology demonstrator built by the research institute Universidad Politécnica Madrid, will serve as an educational benchmark for students to base future satellite platforms on.

At the T+40 minute 29 second mark, the GHGSAT-C1 spacecraft deployeded from the SSMS dispenser. This satellite will be the first in a planned constellation built by GHGSat, Inc. of Montreal, Canada, and will monitor greenhouse gas emissions from sources based on the ground. The spacecraft currently has an operational lifespan of 3 years on orbit, but GHGSat, Inc. hopes to see their satellite remain operational for up to 5 years after launch.

After a 12-minute long coast phase, the ESAIL and NewSat satellites separated at approximately 52 minutes and 35 seconds after liftoff. ESAIL is the first commercial microsatellite developed under ESA’s SAT-AIS program, which was created to assist in maritime tracking. The NewSat spacecraft, which is owned by Spaceflight, Inc., will image the Earth in the visible and near-infrared (NIR) spectrum.

Shortly after ESAIL and NewSat’s separation, the ION SVC LUCAS spacecraft deployed from the SSMS dispenser. This is a satellite carrier that is able to transport a batch of CubeSats and deploy them into precise orbital slots, thereby enabling a simpler and more logistical mode of small satellite transportation to destinations in low Earth orbit.

The separation of the ION Satellite Carrier marked the end of the first satellite deployment phase. At this point, the AVUM upper stage reoriented itself to prepare for a third burn of its RD-843 engine. Ignition occurred at approximately T+58 minutes and 46 seconds, with about seven seconds of burn time before engine cutoff.

Following another 43 minute-long ballistic coast phase, AVUM conducted a four-second burn at approximately one hour, 41 minutes, and 37 seconds after launch. This burn was the last one conducted before final payload separation.

All 46 CubeSats were deployed in two separate phases, starting at about one hour and 42 minutes after liftoff. Swarm Technologies and Planet Labs are responsible for 26 of these CubeSats, with the majority of them being Flock observation spacecraft.

Following the deployment of all 53 satellites, the AVUM upper stage ignited its RD-843 engine for a final time at the T+2 hour, 4 minutes, and 26 seconds mark to conduct a deorbit burn, to limit the amount of debris left in low Earth orbit. This marked the end of Vega’s mission.