Juno and the case of Jupiter’s missing ammonia 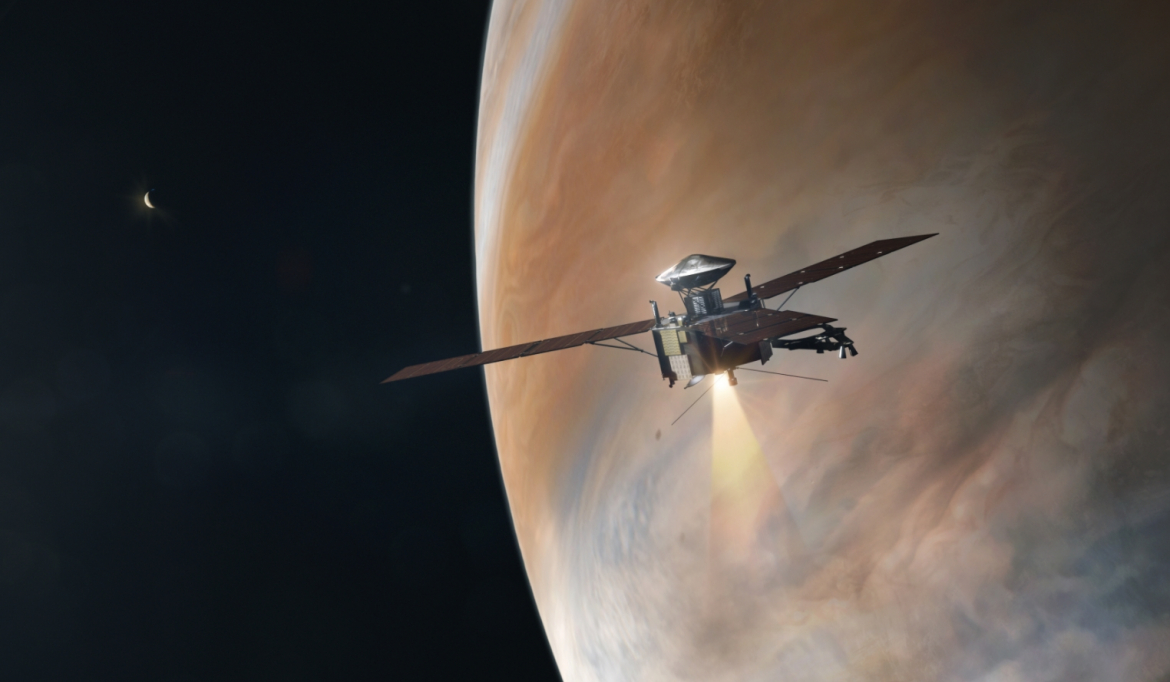 NASA’s Juno spacecraft, the agency’s flagship mission to Jupiter, continues to stream back an incredible amount of scientific data about the largest planet in our solar system just over four years after arriving in orbit.

NASA’s Juno spacecraft began its journey to the giant of our solar system in August 2011, launching aboard a United Launch Alliance Atlas V rocket from the Cape Canaveral Air Force Station, Fl.

After a five-year journey, the craft entered orbit of Jupiter on 5 July 2016 (UTC) for a multi-year mission to peer into Jupiter’s atmosphere and provide global scientific coverage of the planet.

Lightning in Jupiter’s atmosphere was first observed during the two Voyager flyby missions in 1979, at which point it was believed the lightning was triggered in a similar manner as on Earth, occurring only in storms where water is present in all three of its phases.

Subsequent observations by other flyby crafts and NASA’s in-situ Galileo probe did not return any findings that would alter this theory.  All spacecraft observations of lightning at Jupiter until Juno saw bright spots in Jupiter’s clouds, suggesting an origination point deep within water clouds about 45 to 65 kilometers below the visible cloud surface.

But Juno is, in part, changing our understanding of how Jovian lightning can be triggered and how it illuminates a process unfolding in Jupiter’s upper atmosphere that has held scientists’ curiosity for years.

Dissecting information from the Stellar Reference Unit onboard Juno — which observed lightning flashes on Jupiter’s dark side — revealed the presence of  “shallow lightning,” which forms in clouds that contain ammonia-water solutions whereas lightning observed on Earth originates from water.

The Juno data indicates that Jupiter’s water-based thunderstorms fling water-ice crystals 25 km above the water clouds into an area rich with ammonia, where the ammonia melts the ice and forms an ammonia-water solution.

While liquid water in a pure form cannot exist at that altitude, as the temperatures are roughly -88℃, an ammonia-water solution can remain liquid.

“At these altitudes, the ammonia acts like an antifreeze, lowering the melting point of water ice and allowing the formation of a cloud with ammonia-water liquid,” said Heidi Becker, Juno’s Radiation Monitoring Investigation lead at NASA’s Jet Propulsion Laboratory in Southern California.

“In this new state, falling droplets of ammonia-water liquid can collide with the upgoing water-ice crystals and electrify the clouds.  This was a big surprise, as ammonia-water clouds do not exist on Earth.”

But in Juno’s case, the spacecraft’s close flyby of the upper atmosphere and clouds revealed flashes of lightning originating at much higher altitudes than previously observed or thought possible.

That triggered an investigation and deep dive into Juno’s data.

“When Heidi discovered shallow lightning, we realized we had evidence that ammonia mixes with water high in the atmosphere,” noted Scott Bolton, Juno’s principal investigator at the Southwest Research Institute in San Antonio.

It is this part that turned out to be key to solving a larger puzzle scientists have been scratching their heads over. 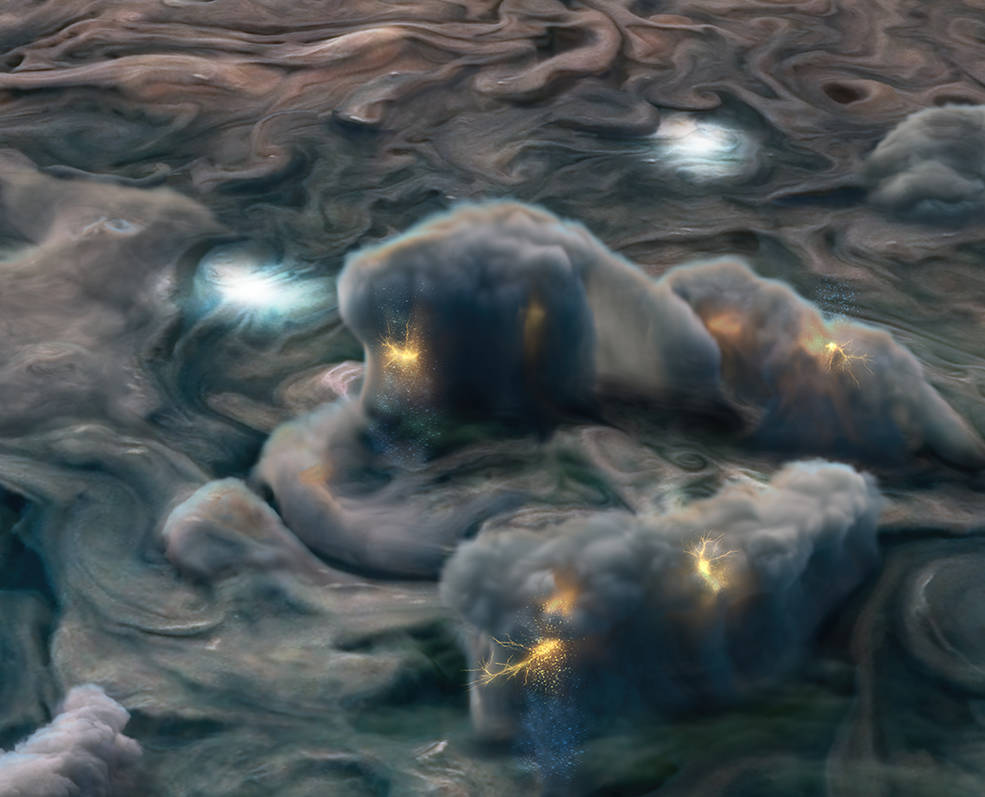 The amount of ammonia in Jupiter’s upper atmosphere is not what it should be; in fact, most of it is missing.  But ammonia can’t just disappear; something had to be removing it.  But what?

“Previously, scientists realized there were small pockets of missing ammonia, but no one realized how deep these pockets went or that they covered most of Jupiter,” said Bolton.  “We were struggling to explain the ammonia depletion with ammonia-water rain alone, but the rain couldn’t go deep enough to match the observations.”

Even more curious, the amount of ammonia in the upper atmosphere changes at a specific spot as that spot moves with Jupiter’s rotation.  Yet scientists could never explain how all this ammonia was missing — until the discovery of shallow lightning.

While ammonia-rain couldn’t solely explain the ammonia loss from the upper atmosphere, hail could.

“I realized a solid, like a hailstone, might go deeper and take up more ammonia,” added Bolton.

The theory now generated by Juno data — in conjunction with the shallow lightning discovery — is that Jovian thunderstorms form slushy ammonia-rich hailstones called “mushballs” by the science team.

These mushballs trap ammonia and water as they form and then carry the ammonia deep down into Jupiter’s atmosphere — far enough and frequent enough to explain the observed ammonia loss.

An independent investigation of this concluded that the hailstones are roughly ⅔ water and ⅓ ammonia and form in much the same way water hail does on Earth, “by growing larger as they move up and down through the atmosphere,” according to a NASA release on the discovery.

“Eventually, the mushballs get so big, even the updrafts can’t hold them, and they fall deeper into the atmosphere, encountering even warmer temperatures, where they eventually evaporate completely,” said Tristan Guillot, a Juno co-investigator from the Université Côte d’Azur in Nice, France. 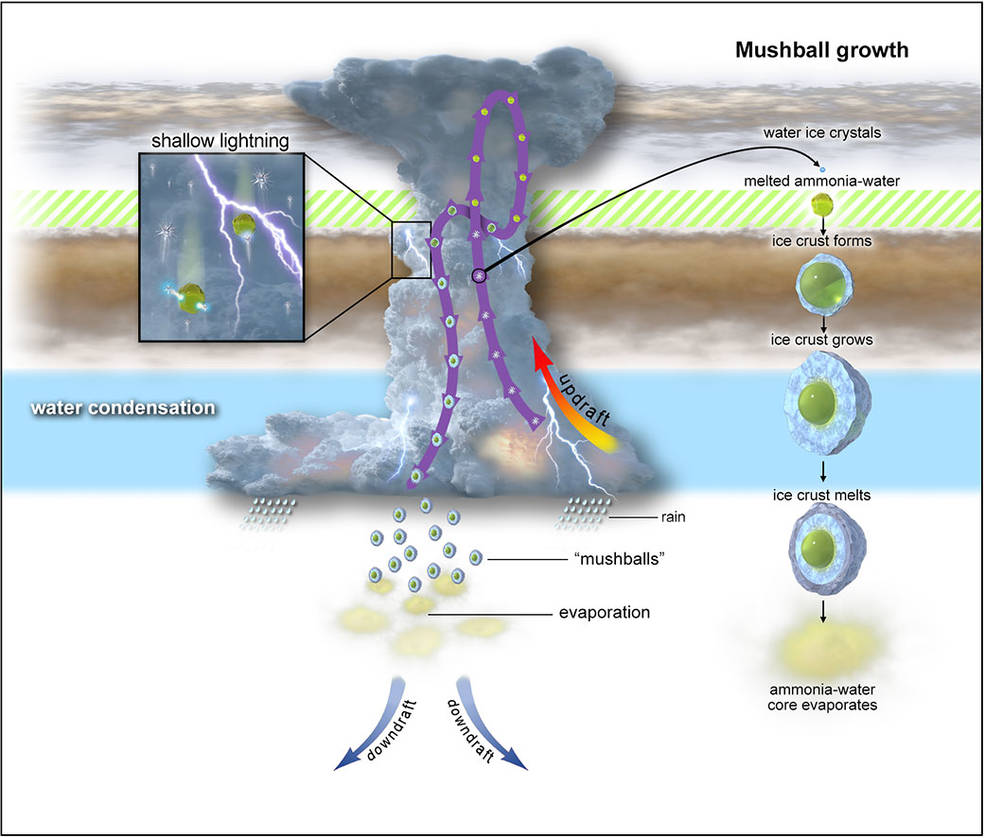 The evolutionary process of shallow lightning and mushballs on Jupiter. (Credit: NASA/JPL-Caltech/SwRI/CNRS)

“Their action drags ammonia and water down to deep levels in the planet’s atmosphere.  That explains why we don’t see much of it in these places with Juno’s Microwave Radiometer.”

Understanding the relationship between Jupiter’s ammonia and water interaction in the upper atmosphere and what can drive the formation of lightning not only helps planetary scientists better understand the dynamics of our home solar system, but also helps explain atmospheric dynamics on exoplanets.

What’s more, understanding how something that should be present is stripped away from certain levels of planetary atmospheres illuminates how the same basic processes that occur here on Earth with just water can likewise occur with a different liquid medium in place.

This kind of connection between processes on Earth and how they could occur elsewhere with or without water can potentially be seen in our search for life in other places in the solar system.  Saturn’s moon Titan has an abundance of liquid methane — which like water could be a primordial breeding ground for life on that moon.

However, it is the connection between the shallow lightning discovery and how it enabled teams to solve a seemingly unconnected mystery that is the truly exciting element as it highlights the interconnected nature of planetary exploration and the suite of instruments the robotic fleet operating throughout the solar system carries.

“Combining these two results was critical to solving the mystery of Jupiter’s missing ammonia,” said Bolton.  “As it turned out, the ammonia isn’t actually missing; it is just transported down while in disguise, having cloaked itself by mixing with water.”

“The solution is very simple and elegant with this theory: When the water and ammonia are in a liquid state, they are invisible to us until they reach a depth where they evaporate — and that is quite deep.”

Juno’s mission at Jupiter will continue for 10 more months until 30 July 2021 when controllers will command the craft into a destructive entry into the planet’s atmosphere to prevent it from accidentally colliding with and contaminating one of the potentially life-harboring Jovian moons.

Jupiter’s intense radiation field and its degrading effects on Juno’s radiation-hardened equipment make a mission extension beyond July 2021 unlikely, but scientists have proposed one.

Rust on the Moon. How is that possible without oxygen and liquid water?