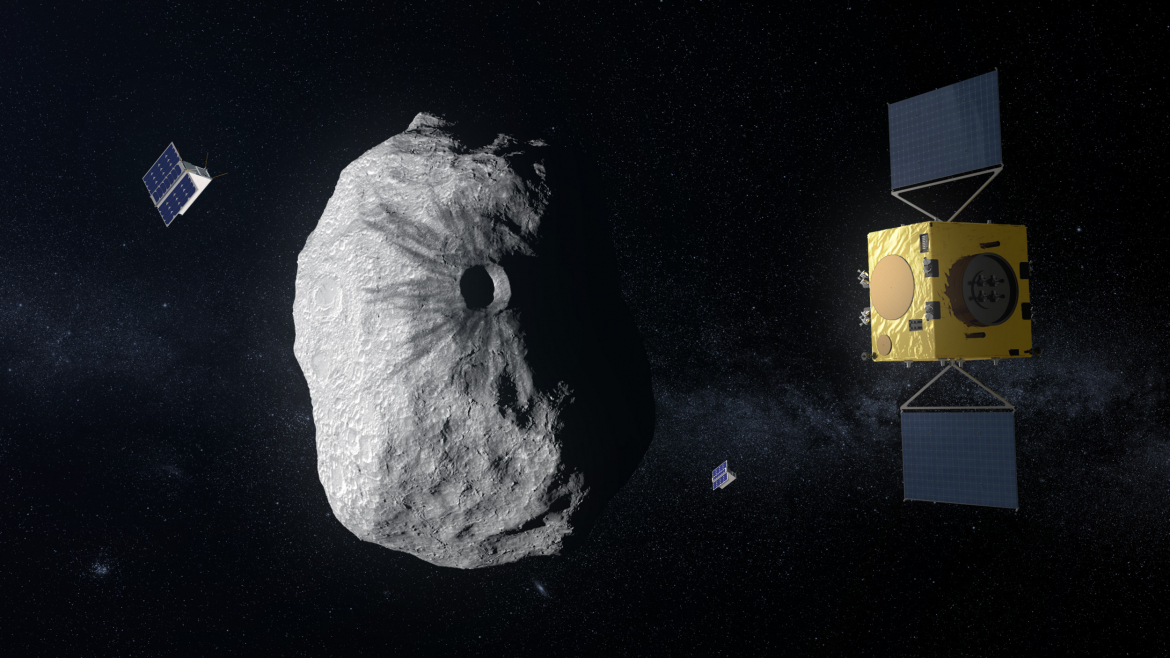 The European Space Agency (ESA) has signed a design, manufacturing, and testing contract with OHB of Germany for their Hera planetary defense mission, marking a major advancement toward the agency’s commitment to NASA for their joint Asteroid Impact and Deflection Assessment project.

NASA’s portion is scheduled to launch in July 2021 and slam into the smaller of the target binary asteroid in October 2022.  Hera will then follow, launching in 2024 on an Ariane 6 and arriving at the binary pair in 2027 to assess how well its predecessor did in changing the orbit of its target.

The contract signed today between ESA and OBH of Germany provides €129.4 million for a detailed design, build, and test of the Hera asteroid orbiter.  The contract specifically includes the new and advanced Guidance, Navigation and Control system for the craft.

Excluded from the OBH contract are the other deals already in place for the two CubeSats that will accompany Hera to the target binary asteroid and the long-lead technology items for the mission — contracts that are already underway.

Unlike the first part of the joint Asteroid Impact and Deflection Assessment project from NASA, an impactor called DART, Hera will not impact either of the bodies of the target but rather perform long-term observations from a close orbit while demonstrating new technologies, particularly for autonomous deep space proximity operations.

The target for the joint mission is the Didymos pair, a binary asteroid whose primary is 780 m in diameter and whose moonlet (small moon) is 160 m in diameter.

The moonlet, called Dimorphos, is the target of NASA’s DART kinetic impactor.

DART (Double Asteroid Redirection Test) is scheduled to launch no earlier than 22 July 2021 from Vandenberg Air Force Base, California, atop a SpaceX Falcon 9 rocket.

Powered by a NEXT ion thruster, the 500 kg (1,100 lb) spacecraft will spend 15 months cruising to its destination before slamming into Dimorphos at 6.25 km/s.

DART carries no scientific instruments, just a star tracker and camera for autonomous navigation; it is simply an impactor.  It will, however, carry with it an Italian-provided CubeSat called LICIACube (Light Italian CubeSat for Imaging of Asteroids) that will deploy shortly before observing the ejecta cloud thrown up from the impact.

LICIACube will collect images of the impact and ejecta and transmit its captured photographs back to Earth; it was offered to DART by the Italian Space Agency after ESA’s first spacecraft contribution to the mission was cancelled in 2016.

That project, the Asteroid Impact Mission, would have worked in tandem with DART, observing the other craft’s impact while providing immediate and long-term assessments of changes to Dimorphos’ orbit and characteristics while studying the ejecta material. 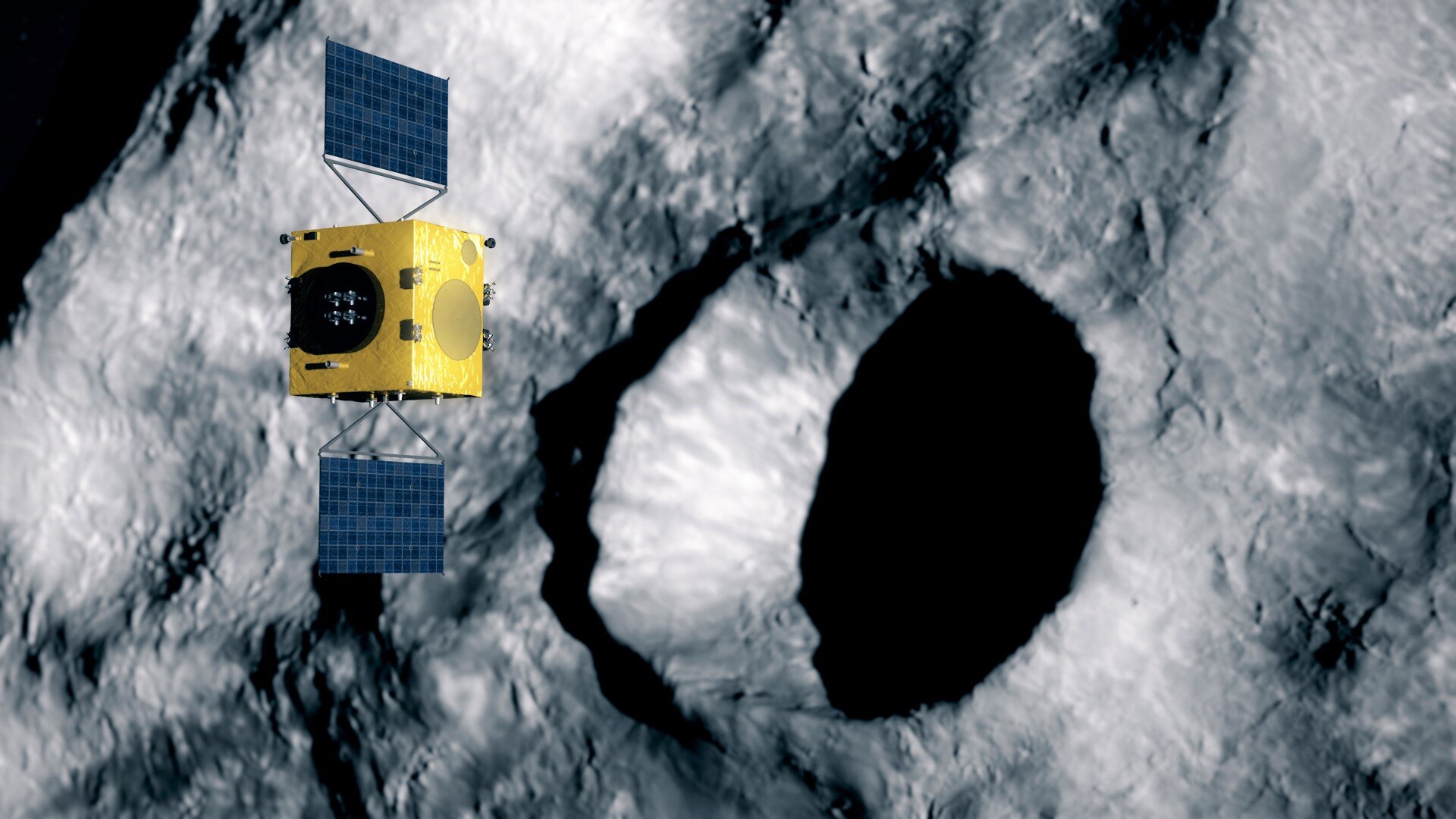 While Hera will not be able to do that first part, most of the Asteroid Impact Mission’s objectives can be accomplished with LICIACube and Hera’s long-term in situ observations that can begin upon its arrival in 2027.

The overall mission will test whether or not a kinetic impactor can successfully deflect potentially hazardous Earth-bound asteroids by slightly changing their orbital speed to either slow them down slightly or accelerate them slightly.

A minor velocity change imparted to a large asteroid could — over the course of months or years — alter its orbit safely away from intersecting with Earth.

And this is exactly what NASA and ESA seek to do on a smaller scale in the Didymos pair system.  The DART spacecraft, while impacting Dimorphos at 6.25 km/s will only produce a net change in the moonlet’s velocity of 0.4 millimeters per second.

While that is an incredibly small change in velocity, it will radically change the mutual orbit of the Didymos primary and its moon.

As such, the interagency mission represents the first time humanity will intentionally alter another celestial body’s orbit.

By impacting the smaller of the two bodies, which orbits the larger, NASA and ESA can safely observe how a kinetic impactor alters orbital characteristics of an asteroid.

The Didymos pair’s overall orbit of the Sun is also extremely favorable to this type of test as its orbit does not cross that of Earth’s — meaning there’s no chance the NASA-ESA experiment could accidentally cause this pair to pose a threat to our host planet.

When Hera then arrives in 2027, it will find a very different system than the DART spacecraft encountered while on approach for impact.

Hera will use a suite of scientific instruments as well as two ride along CubeSats (which will attempt to land on the surface of Dimorphos) to characterize exactly how much momentum was transferred between the two objects at DART’s impact and exactly how much Dimorphos’ orbit was altered.

This will “allow, for the first time, the validation or refinement of numerical models of the impact process at asteroid scale, rendering this deflection technique for planetary defence ready for operational use if ever needed to safeguard our home world,” notes an ESA overview of the mission.

Hera will accomplish its scientific objectives by utilizing:

These instruments will be supplemented by those carried aboard the two CubeSats, which will use radar to investigate the interior of the moonlet as well as imaging and mass spectrometers to study its mineralogical and elemental composition.

China bounces back with Long March 11 launch of nine satellites