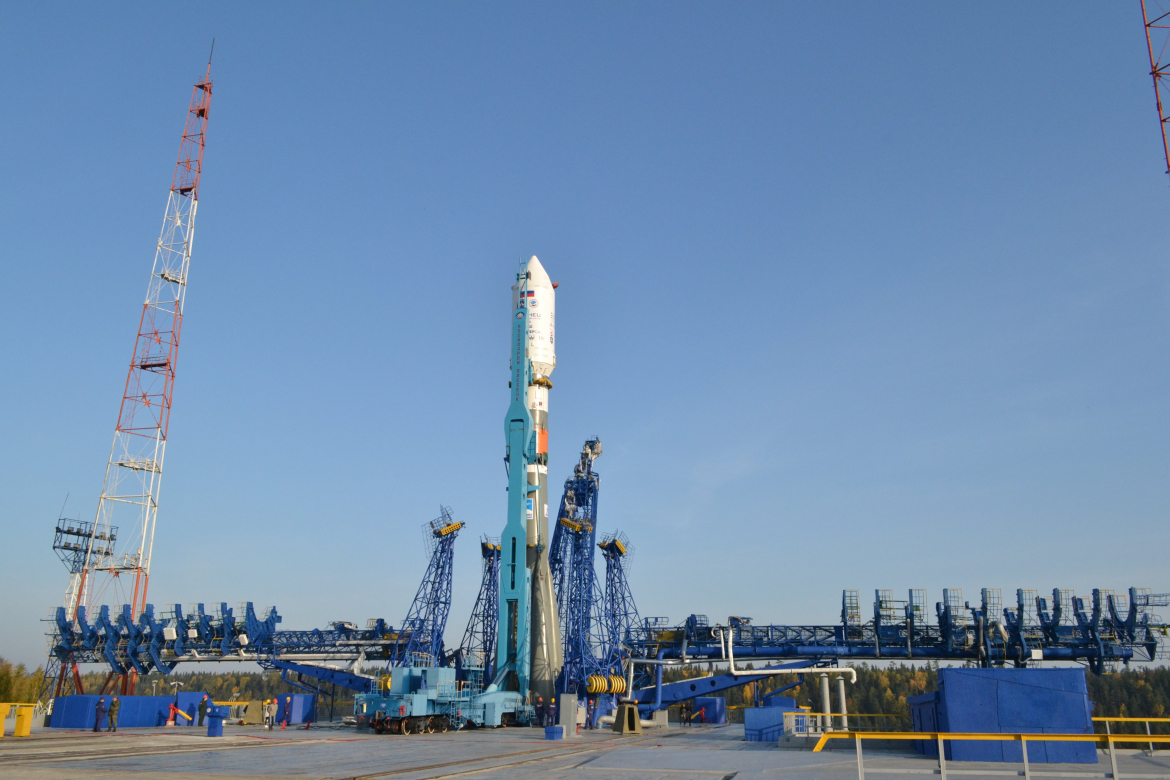 The Russian Aerospace Forces, itself a division of the Armed Forces of the Russian Federation, have launched a batch of three Gonets civilian communication satellites as well as 18 international rideshare payloads.

As part of a consolidated effort to streamline the myriad of Russian launch vehicles into two commercially viable options, the Soyuz 2 and the operationally upcoming Angara, this was the first mission in which Soyuz took up launch duties for the Gonets-M series of satellites.

Those prior missions all launched on Rokot-KM launch vehicles (except the first, which launched on a Kosmos-3M rocket).

The Soyuz for this particular mission was a 2.1b variant, flying with the standard Soyuz 2 booster and core stage engines but an uprated RD-0124 engine on the Blok-I second stage.

Overall, the Soyuz 2 family of launch vehicles — including the Soyuz 2.1a, 2.1b, and 2.1v, have flown 105 times with 98 successes, four outright failures, and three partial failures (one each to the three variants). 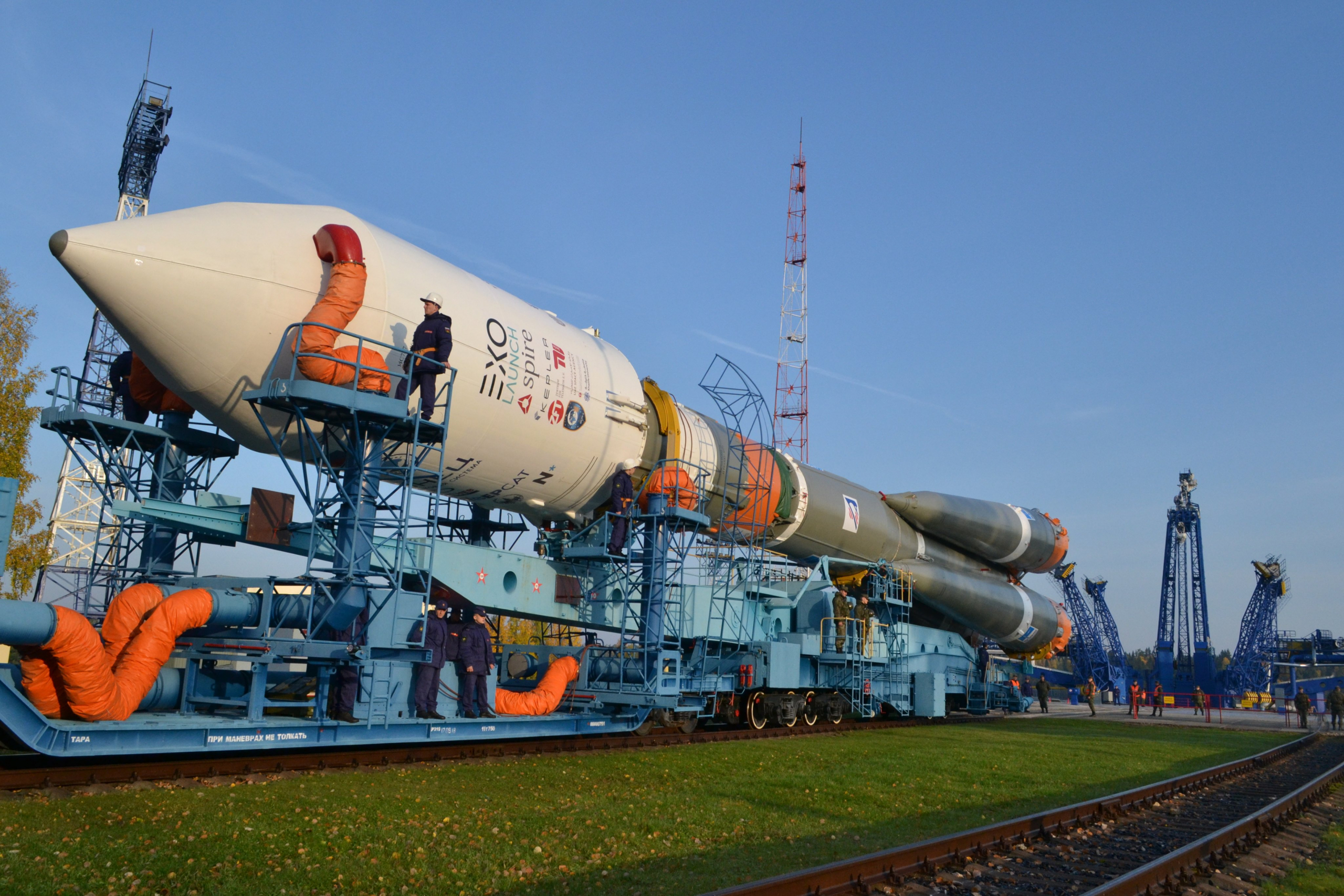 The Soyuz 2.1b rocket for the Gonets No. 16 mission rolls out to Site No. 43 at the Plesetsk cosmodrome. (Credit: Exolaunch)

Of note, some of those failures and partial failures are due to malfunctions of the optional Fregat-M upper stage, not the actual Soyuz 2 rocket itself.

After a multi-month arrival, assembly, integration and check out flow, the payloads were mated to the top of the Fregat-M upper stage before being encapsulated.

The payload was then attached to the top of the Blok-I second stage, and mating of the rocket completed.

The Soyuz and its payloads were then moved horizontally by rail to the launch pad at Site No. 43 at the Plesetsk Cosmodrome on 25 September and erected vertical shortly thereafter.

The mission is the first flight of Gonets satellites on board a Soyuz 2.1b rocket, which is utilizing the optional Fregat-M upper stage to provide additional lift capacity into the operational orbit of the primary satellites.

Those primary satellites are three Gonets-M communication crafts, the second generation of the Gonets system.  Earlier Gonets were derived from the Strela-3 satellites and launched between 1992 and 2001.

The program is operated by JSC Satellite System GONETS, a company in which the Russian Federal Space Agency, Roscosmos, owns 51%.  Gonets-M satellites share a common design with the military Rodnik communications satellites and are used for store-and-dump operations where data is uploaded to a satellite, stored in its memory, and later downlinked to another user.

The military to civilian nature of the Gonets-M series still requires authorization from the Prime Minister of the Russian Federation to permit the Russian Ministry of Defense to launch the crafts.

For this mission, that authorization was formally handed down on 14 September by Prime Minister Mikhail Mishustin when he signed a decree to “Allow the Russian Ministry of Defense to use on a contractual basis space systems and military complexes and involve the personnel of military units to ensure the launch from the Plesetsk cosmodrome by the Soyuz-2 carrier rocket (stage 1b) with the Fregat upper stage of the Gonets communications spacecraft -M No. 16 (Russian Federation) and associated payload.”

The three satellites that launched on this mission have serial numbers 27, 28 and 29, and will ultimately be placed into an approximately 1,400 km orbit inclined, 82.5 degrees to the equator by the Fregat-M upper stage.

The next round of Gonets-M satellites, numbers 30, 31, and 32, are currently scheduled to launch no earlier than 16 November 2020 on another Soyuz 2.1b rocket from the Plesetsk cosmodrome.

Thank you, the #SALSAT team! We’re so proud to work with you. https://t.co/3QbUhsEJaT

The rideshares are made possible on Gonets-M launches due to the switch to the more powerful Soyuz launch vehicle, which has enough leftover lift margin — after the mass of the three Gonets satellites are factored in — to take small satellite rideshare payloads along as well.

These types of rideshare missions are becoming far more common as the market for small satellites continues to grow at a pace quicker than the smallsat launch providers can accommodate.

In the last year, Roscosmos, Arianespace, and SpaceX have all announced major rideshare initiatives as well as dedicated small satellite launch opportunities on the large rockets of their respective fleets.

EGS Integration Console in the middle of Artemis 1 countdown deliberations