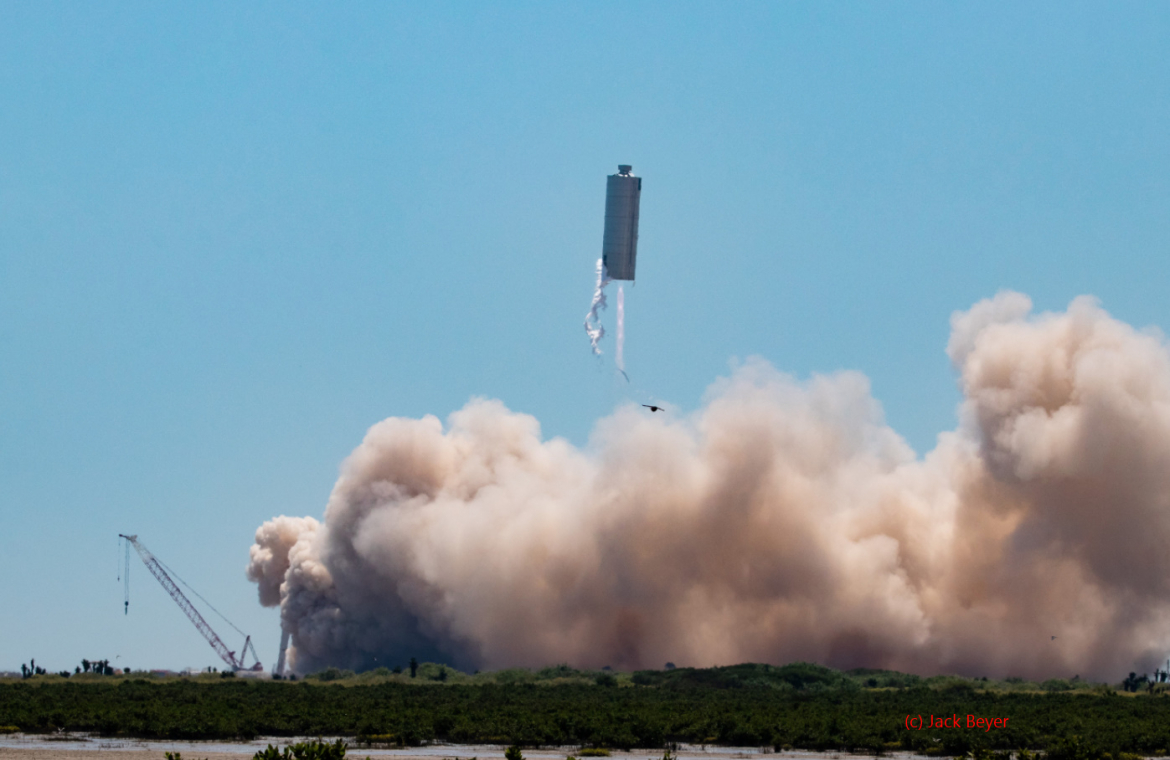 SN6’s test was a near-mirror of SN5’s short flight, with both prototypes aiming to refine SpaceX’s launch and landing operations. Meanwhile, additional Starships continue to evolve, along with preparations for the Super Heavy booster, which – according to Chief Designer Elon Musk – could conduct an initial test hop by October.

In another sign of SpaceX Boca Chica’s production cadence, the allowance for SN6 to be ready to hop just weeks after SN5 was aided by having SN6 already assembled in the Mid Bay while SN5 was reaching 150 meters into the South Texas sky.

Both SN5 and SN6 are made from the 301 steel rings, making them near twins by way of manufacture. This was by design, allowing SN5 and SN6 to repeat the hop test multiple times to aid SpaceX’s information on the performance of the vehicle in its single Raptor configuration.

Following aborts on Sunday – the opening day of the test series – the focus is on SN6’s hop, retargeted Thursday. The test took place in the first half of the 12-hour window that ranged from 8 am to 8 pm local time. As per usual, a police siren sounded around 10 minutes before the ignition of Raptor SN29.

The test appeared to go well, with SN6 rising into the air, following a very similar path as SN5, before returning to the landing pad. The only potential blot on her maiden hop may have been related to a leg, given a slight lean observed after the smoke and dust cleared.

Under the power of Raptor SN29, SN6 has completed a near-mirror test of SN5's hop!

SN6 will be eventually sent back to the production facility for post-hop processing.

SN5 appears to have completed post-hop processing in the Mid Bay, rolling out into the Production Facility yard to allow for a composite overwrapped pressure vessel (COPV) changeout in a clear sign SN5 will hop at least one more time.

The rollout of the Mid Bay was primarily to allow for the next Starship to complete stacking operations, with SN8 requiring both bays for the final stack with the aft/engine section.

SN8 will be a “full-scale” Starship, complete with a nose cone and aero surfaces, allowing it to reach the higher altitude milestone of up to 20 KM. The vehicle may initially launch to a lower altitude during its test regime.

This vehicle – made from steel rings built from a version of the 304L alloy, will host three Raptor engines to enable to achieve these higher altitudes. The aero surfaces will be employed for the landing sequence, which includes the controlled “bellyflop” approach before the Raptors push the aft towards the landing pad to touchdown on its landing legs.

Starship SN8 has been stacked in the mid bay at SpaceX Boca Chica. 🤩🚀@NASASpaceflight https://t.co/9sTD7oIUwZ pic.twitter.com/fImwRwHcFQ

Potentially akin to SN5 and SN6’s relationship, Starship SN9 is now into the business end of its construction. Also constructed from the 304L steel rings, SN9 is almost certain to receive a nose cone and aero surfaces.

However, there are clues SN9 may be another evolution on the Starship roadmap, with an increased amount of surface area shown to have attachment points for the installation of the Thermal Protection System (TPS) tiles. 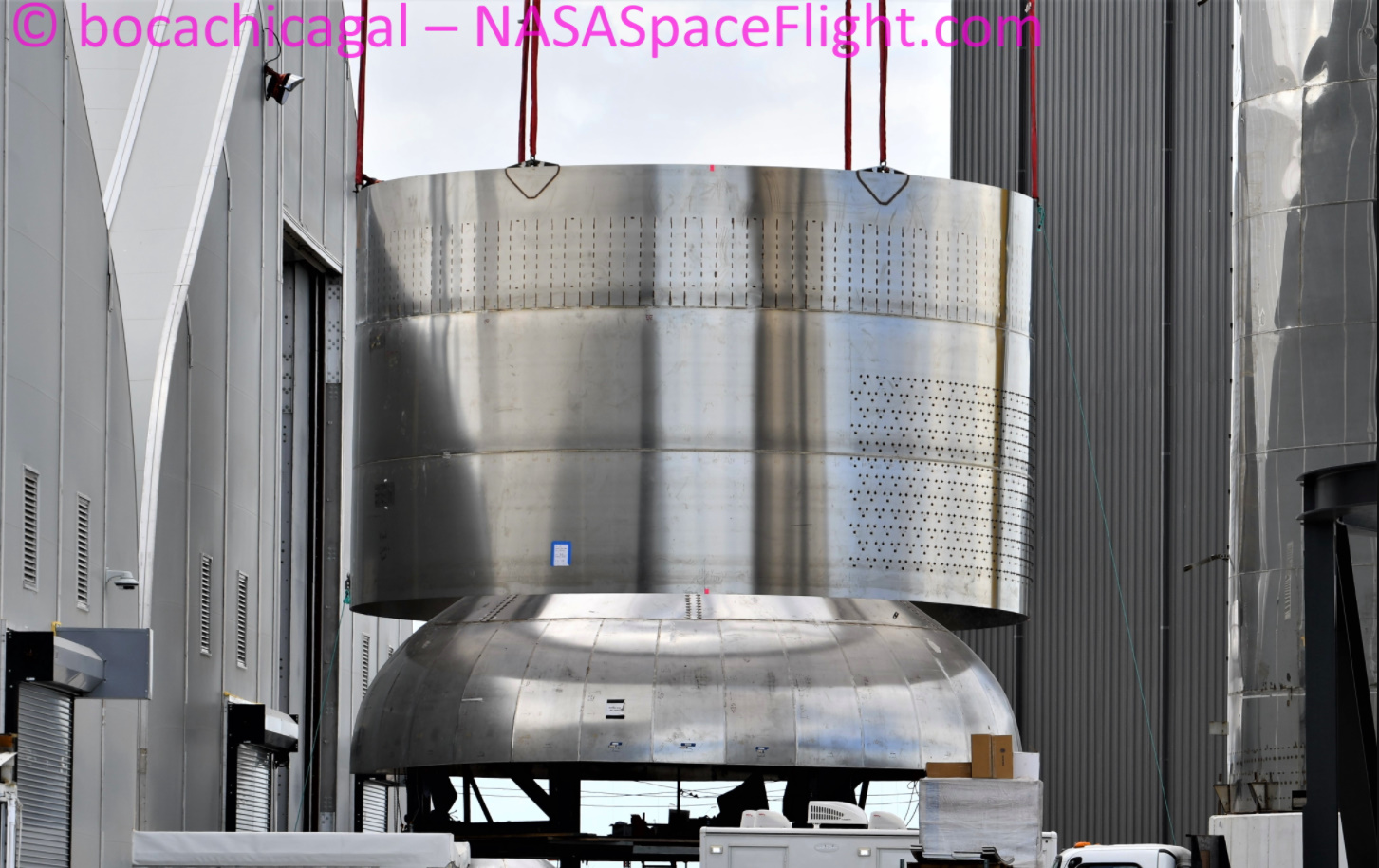 Such an observation doesn’t mean this vehicle is going to be a suborbital rocket. Instead, it is likely SpaceX wants to evaluate the performance of TPS attach points during this test flight profile.

This would be prudent, not least based on the lessons learned during Shuttle, but also because a few tiles from a small patch near the aft of the vehicle have detached during Starship testing at the launch site.

Also part of SpaceX’s test regime is another Test Tank. Designated as SN7.1, this tank is also made from the 304L steel and will be overpressurized to failure, on purpose, to allow for additional data points.

SN7.1 follows on from SN7, also a test tank, which was also pushed to failure – twice in fact. The first test resulted in what was more a leak than a failure before it was patched up and pressurized to destruction.

SN7.1 is likely to roll to the launch site, to a dedicated test stand next to the Starship launch mount. Once SN6 hops over to the landing pad, SN7.1 will be able to take the road trip for its test just days later.

The construction of these Starship prototype vehicles is ongoing, while significant construction work continues at both the Production Facility and the launch site. Both efforts are related to Super Heavy.

Work on the High Bay has reached its full height, with sections that will host the roof now being installed, while a large amount of work takes place on the lower levels to enclose the 81-meter tall facility.

This is where the sections – for what will become the world’s most powerful rocket – will be assembled.

Once assembled, the vehicle will be transported to the orbital launch site, next door to the current Starship launch area.

Construction on this launch mount is picking up the pace, with the sheathing of the rebar columns that will support the base of the mount for the Super Heavy. 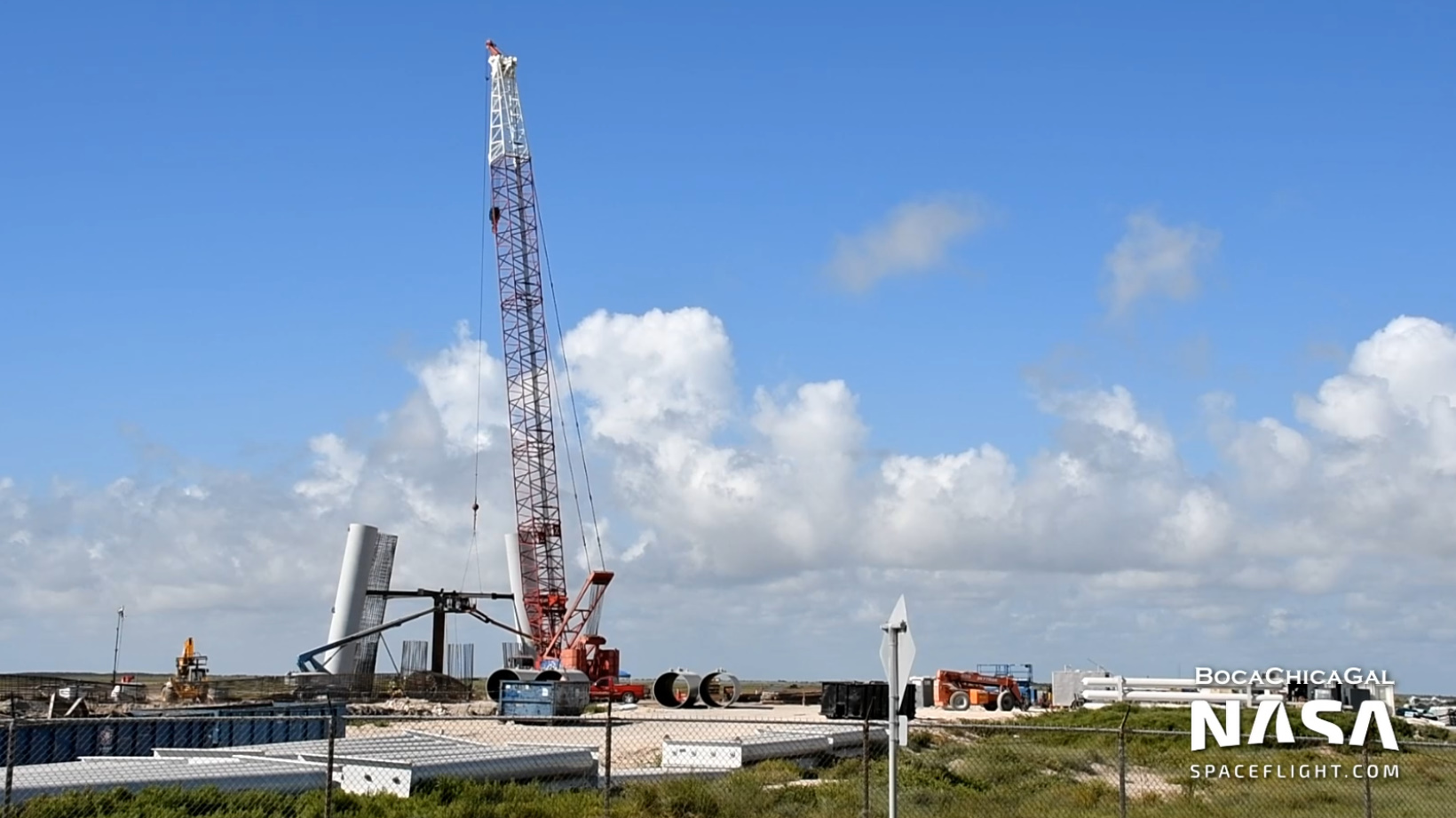 The Orbital Launch Mount – Photo by Mary (@bocachicagal) for NSF

While this work was seen as a major sign of progress toward the day a Super Heavy would be observed out in the open, it was widely expected that any on-site testing of such a vehicle would be next year. Elon Musk then blew that prediction out of the water on Twitter.

When noting the upcoming announcements for his numerous companies, Elon noted the next Starship update would be in October, adding: “We will have made a lot of progress by then. Might have a prototype booster hop done by then.”

While such a target is very ambitious, one of the critical paths to such a test hop of the huge Super Heavy was removed by Elon, adding the test would only require two Raptor engines.

He also added that “Raptor reached 230 mT-F (over half a million pounds of thrust) at peak pressure with some damage, so this version of the engine can probably sustain ~210 tons. Should have a 250+ ton engine in about 6 to 9 months. Target for booster is 7500 tons (16.5 million pounds) of thrust.”

With SN29 involved with the SN6 hop, earlier this month, Elon noted that testing was already up to engine SN40.

SN40 is about to be tested & has several upgrades over 330 bar engine. For reference, 330 bar on Raptor produces ~225 tons (half a million pounds) of force.

This should provide a stock of enough engines to cover SN8, SN9, and the test hop of the Super Heavy – with more engines likely to have passed Static Fire testing at SpaceX’s test facility in McGregor by the time those vehicles require them to arrive in Boca Chica. 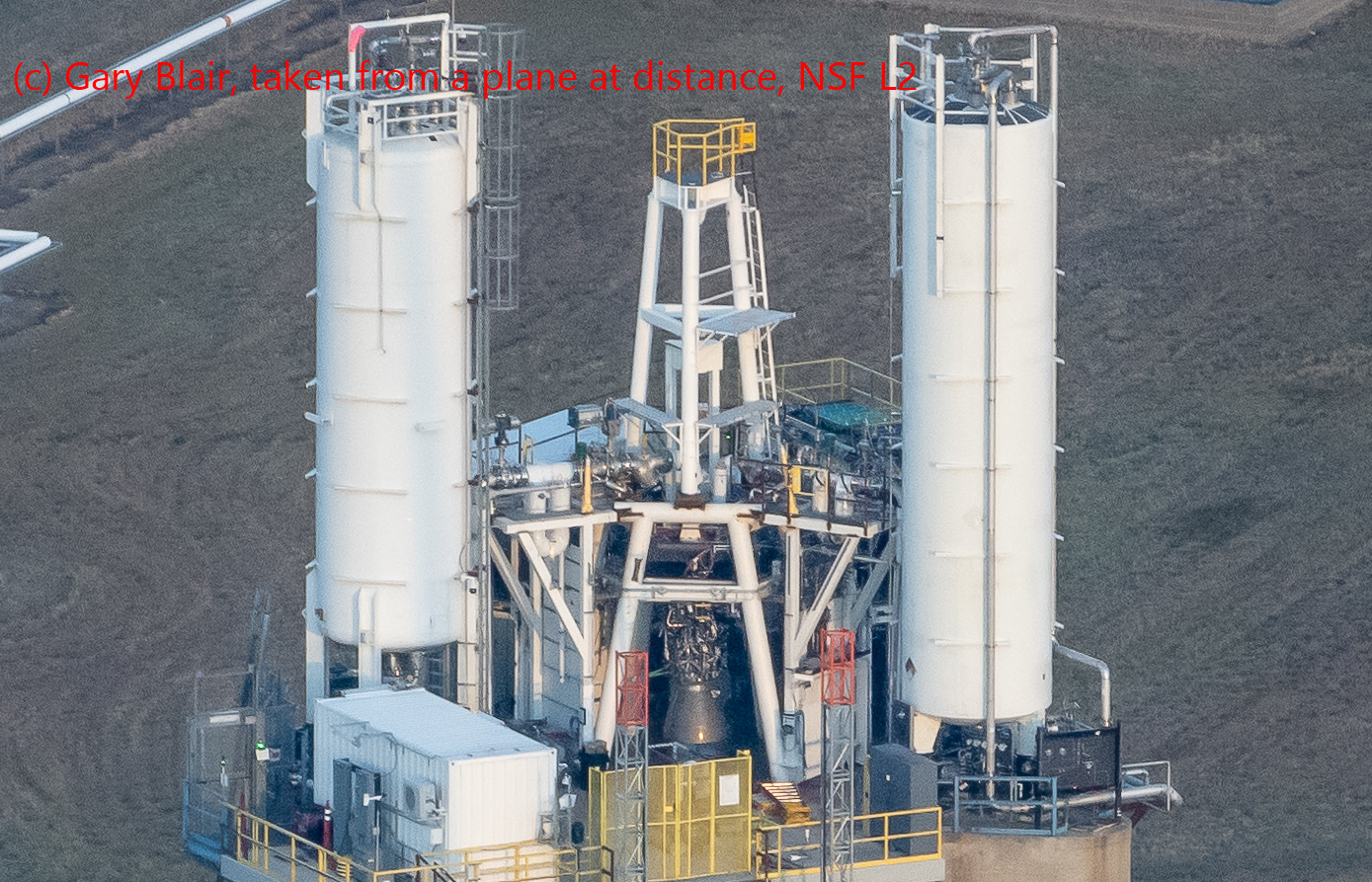 Potentially Raptor SN40 on the Tripod Stand at McGregor. Photo by Gary Blair, via his plane commute, from distance, NSF L2

Testing is also proceeding well with this impressive full-flow staged combustion Methalox engine, with Elon earlier adding that a “Raptor engine just reached 330 bar chamber pressure without exploding!” This is way above the usual benchmark of around 300 bar.

With an eye to orbital flight, Elon added that the version of Raptor – that will be doing a lot of the pushing once in space, the RaptorVac (RVac) – has already begun. “Testing with shorter RVac skirt went well. Full-length skirt test coming soon,” he recently tweeted.

This confirmed photos of the horizontal test stand at McGregor, showing both a standard Raptor under testing and another with a modified nozzle/skirt – highly likely to be the engine Elon was referencing. 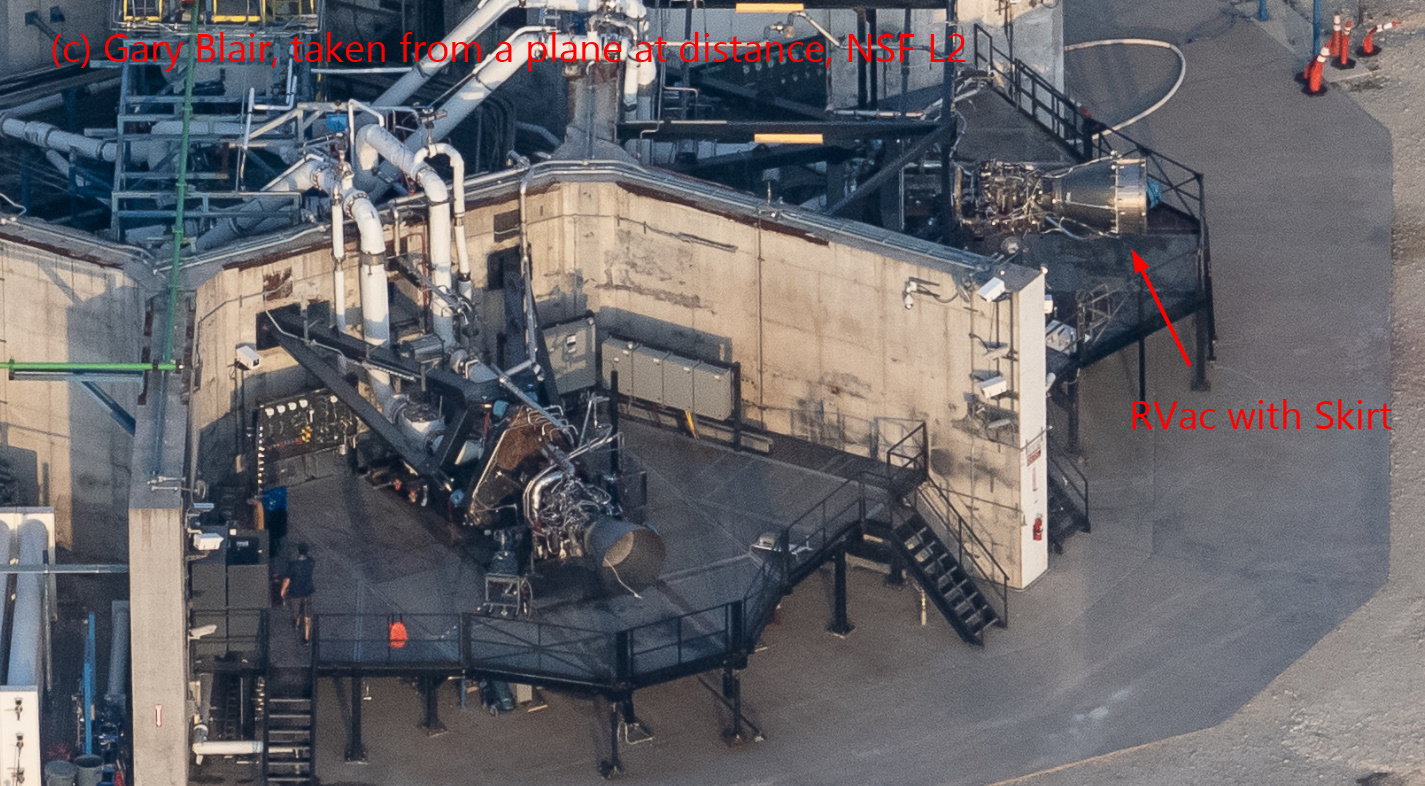 Two Raptors on the Horizontal Stand, one with RVac skirt. Photo by Gary Blair, via his plane commute, from distance, NSF L2

Challenges will be ahead for Super Heavy’s development, with Elon citing the Thrust Structure – that will have to cope with hosting the power of 31 engines – being “the hardest part of the booster design.”

A job listing was also recently spotted, calling for “Starship welders in McGregor,” required to work to build the structural test stand for the Starship and Super Heavy vehicles. “The Starship welders will work with an elite team of other fabricators to rapidly build and weld the large assembly that will support vehicle structural testing at our launch site in South Texas.”

Elon also updated the landing leg set-up for Super Heavy, adding “the booster design has shifted to four legs with a wider stance (to avoid engine plume impingement in vacuum), rather than six.”

This came after a pointer to the future, where Elon confirmed most launches would eventually take place from a platform out at sea. “Will mostly launch from ocean spaceports long-term,” he noted on Twitter. These ocean spaceports would serve several purposes, not least cutting down on the issue of impacts from the firing of 31 Raptors on local communities.

With Super Heavy progressing toward testing, there remains the distinct possibility the vehicle could be conducting more ambitious test flights before the Space Launch System (SLS) conducts its maiden launch, which is currently expected to be late in 2021.

However, it unlikely to be a race between the two monster rockets.

While Elon has made no secret of his disdain for expendable rockets, such as SLS, SpaceX’s close working relationship with NASA negates a competitive edge.

It is more likely Elon’s primary motivation is related to the banner he has been flying since setting up SpaceX, the push for a reusable – thus viable – interplanetary cargo and crew transportation system that can be the enabler to make life multi-planetary.