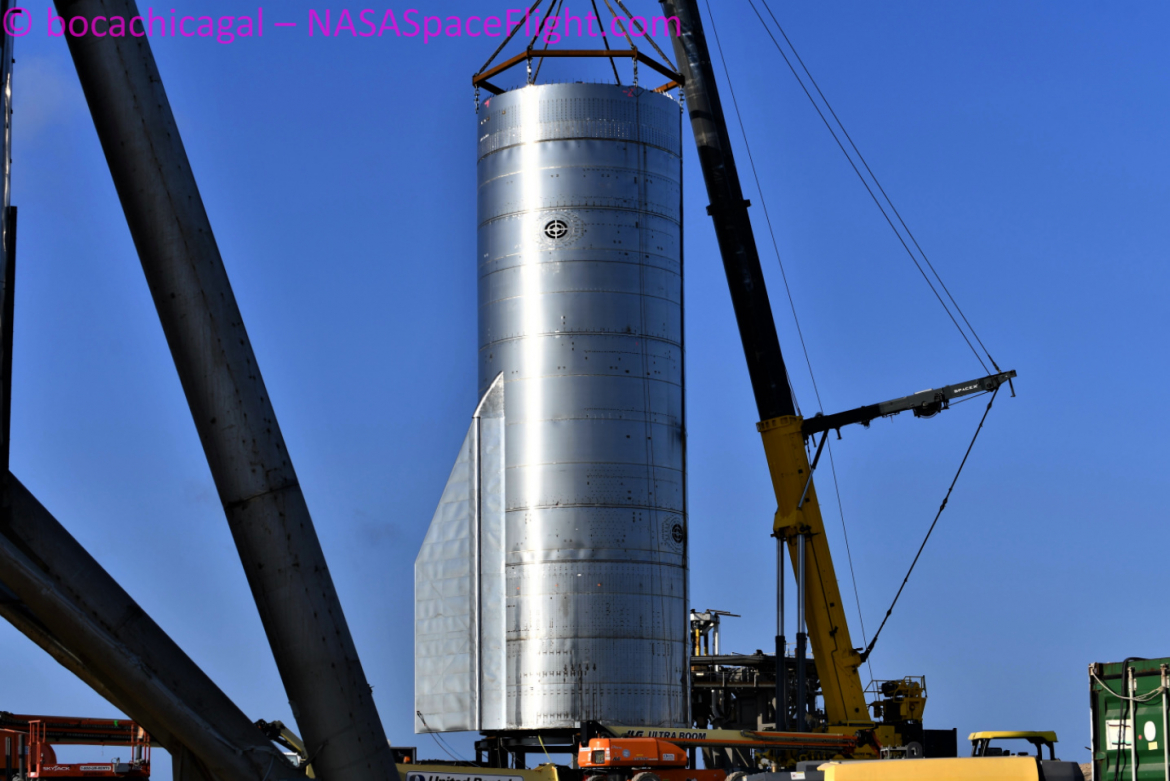 Starship SN8 has arrived at the launch site for a test campaign full of firsts for SpaceX’s prototype vehicle. Complete with aero surfaces, SN8 will be tested and launched with three Raptor engines on a refined test flight to 50,000 feet (15 km). This vehicle is the first in a family of Starships that will incrementally test the launch, return, and landing capability ahead of the push to orbit next year.

SN8’s trip to the launch site waited until the test program with SN7.1 had concluded, with – as planned – a pressurization to failure.

Known as the Burst Test, SN7.1 concluded several days of testing with the loading of LN2 (Liquid Nitrogen) at cryogenic temperatures before closing the vents, allowing pressure readings to be taken until the tank finally “popped”.

According to SpaceX’s CEO and Chief Designer, SN7.1 achieved a good “bar rating” – per the pressure it reached before giving up, allowing for additional improvements to be made.

8 bar differential in ullage, 9 bar at base due to propellant head. It’s enough. Improvements in work.

Notably, while it was assumed SN7.1 was made exclusively from the 304L alloy, some 301 made up part of the Test Tank. The interface at which 304L and 301 met is where SN7.1’s failure point was found.

Starship SN8 is understood to be “all 304”. However, Elon’s tweet did not preclude the possibility some 301 alloy structures exist on SN8, given the specific reference to SN9. 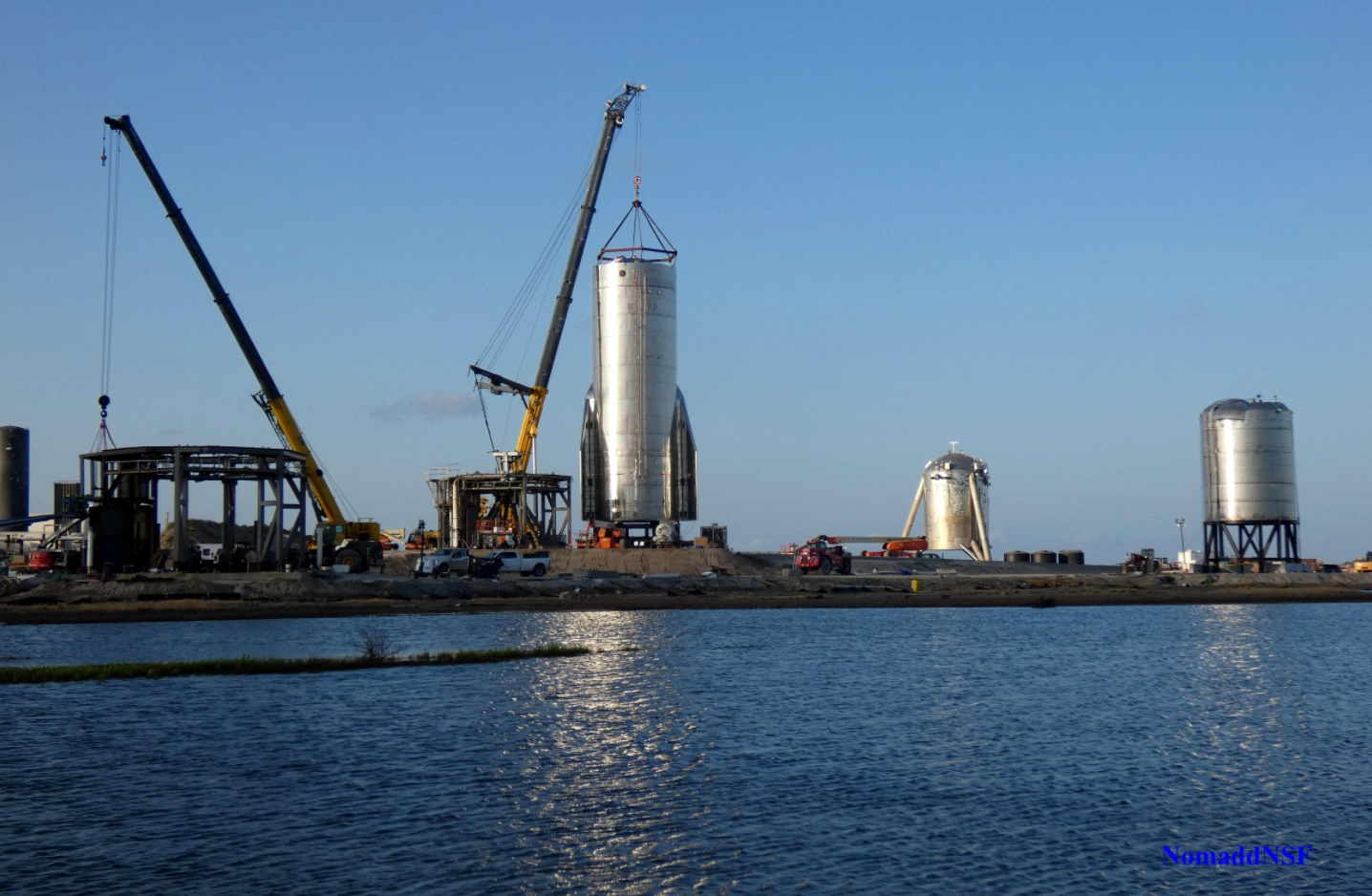 SN8, Hopper and SN7.1 – with the Orbital Launch Pad from left to right – via NSF Member Nomadd.

Regardless, this next fleet of prototype vehicles is part of a new test phase for SpaceX, with SN8 set to conduct a tag-team of tests with her sister ships, SN9 and SN10 – and potentially beyond until the next evolution.

SN8 is the flag bearer, rolling out from the Production Facility to the Launch Site for preparations expected to take a few weeks until the green light is given to rise into the Boca Chica skyline.

SN8 has numerous milestones to conclude during the coming weeks, beginning with proof testing that will involve the prototype being filled with Liquid Nitrogen at both ambient and cryogenic temperatures.

The preparations to install the nosecone are also expected over the coming days, per Elon.

SN8 will then receive three Raptor engines ahead of at least one Static Fire test before they are prepared to push her into the air during a highly-evolved test flight when compared to the 150-meter hops conducted by SN5 and SN6.

However, the target altitude has been refined again, moving from an initial 20 km to 18 km and now 15 km.

“We just need enough height to test body flaps and drawing propellant from headers versus main tanks. Will do several flights to confirm working well, then add heat shield and go high Mach,” Elon added as the reason for the refined target. “The flaps are now directly driven by electric motors with a gearbox! No more hydraulics.”

Meanwhile, the heat shield (Thermal Protection System – TPS) material has been “patch tested” during the hop tests and installed on a test ring at the Production Facility. 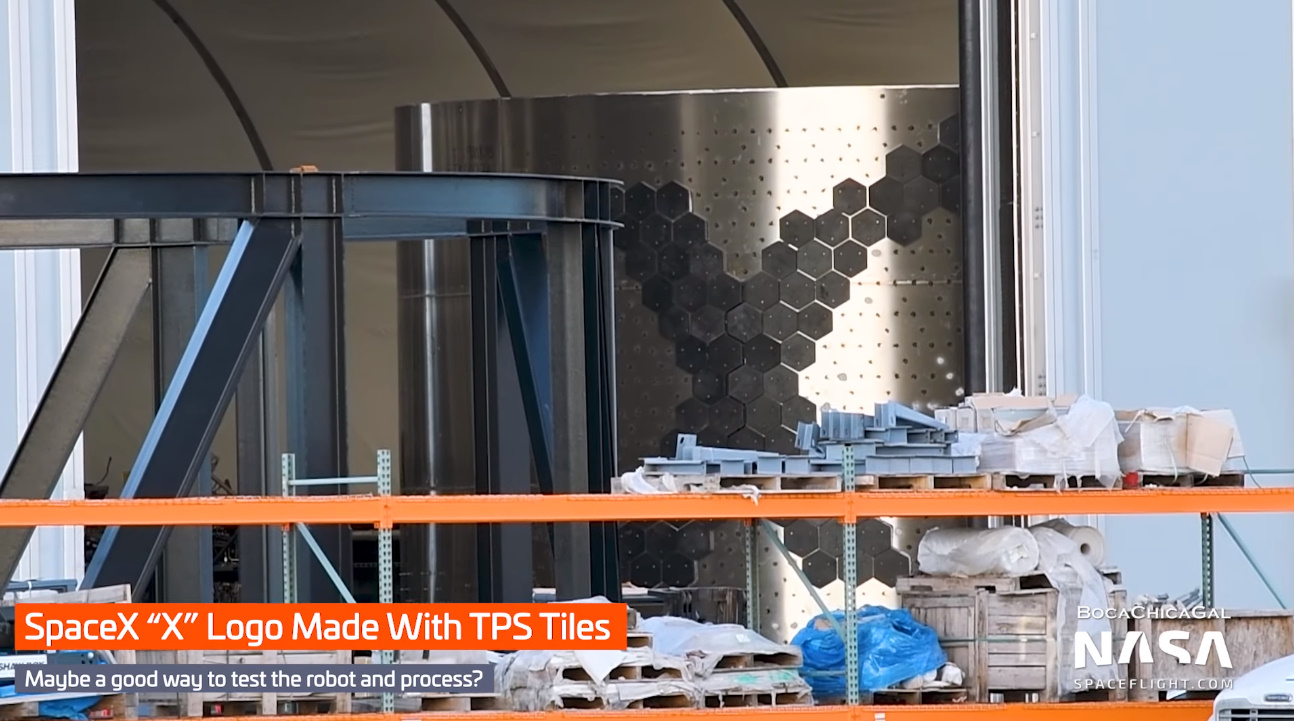 Test installation of TPS – via Mary (@bocachicagal) for NSF

With SN8 moving to the Launch Site, stacking operations can now conclude on Starship SN9, which is likely to be a near-mirror with its former neighbor.

Not unlike SN5 and SN6, numerous flights with several Starships not only allows for fast turnaround between test launches, but also serves as cover if – as can be fully expected during an ambitious test program – one Starship is destroyed.

The final mating operations of SN9 are expected to occur over the next few days, with the Forward Dome being stacked on Sunday. 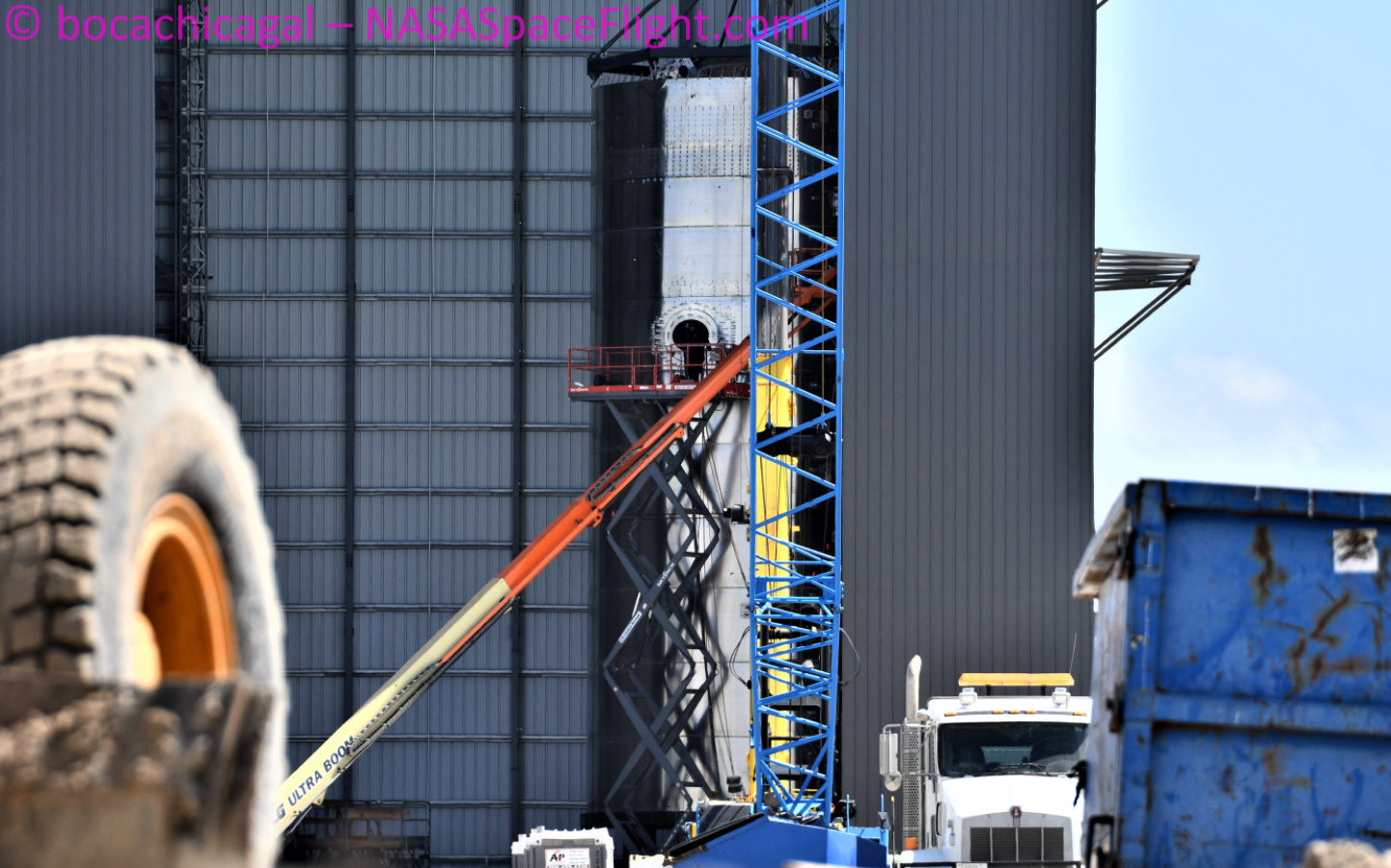 The last operation is the lifting of the stack onto the final section – the Thrust Section – which will be housed in the next-door bay. This will complete the SN9 stack.

Once SN9 is finished, sections for SN10 are expected to arrive for build-up inside the Mid Bay, following the same path as previous stacking flows.

In a sign of SpaceX Boca Chica’s incredible production cadence, SN11 sections have already been spotted outside the “Big Tents” with parts for Starships up to SN13 believed to be already on-site in Texas.

However, all eyes are on another prototype vehicle following the first-ever public spotting of a new section out in the wild.

Ever-since Elon first noted that production on the first Super Heavy prototype was about to begin, checking the labels on steel rings became more important than usual.

Thanks to the eagle eyes of NSF’s photojournalist Mary (@bocachicagal), that first section for Super Heavy was spotted during the week.

Named “COMM BARREL ASSY BOOSTER” – the three-ring section will be located two-thirds up the lengthy booster and is set to be stacked in the nearly-completed High Bay facility.

The current plan is for the first booster to be test flown to around 150-meters – not unlike SN5 and SN6 – under the power of two Raptor engines.

The test launch will take place from the Orbital Launch Pad, also under construction next door to the launch site that will be used by SN8.

The combination of Starship and Super Heavy testing are all playing a part towards orbital test flights, set to promote the vehicle into an operational, fully-and-rapidly-reusable launch system with unrivaled capability.

While the sea-level Raptors have proven they can fly during the hops, the first-ever triple Raptor firing will be realized during SN8’s Static Fire test. However, the Vacuum Raptor, which will fire up in space, has also been tested at SpaceX’s McGregor Test Facility in Texas over recent days.

The “RVac” was only recently shipped from SpaceX HQ in Hawthorne, California. It was then spotted on the horizontal test stand at McGregor by NSF’s Gary Blair before SpaceX released footage of it firing up.

A follow-up flyover (L2 McGregor) appears to show that the RVac has been removed from the test stand. This returns McGregor to three bays for sea-level Raptor engine testing to fulfill the growing demand for engines for the upcoming three-Raptor test flights out of Boca Chica.