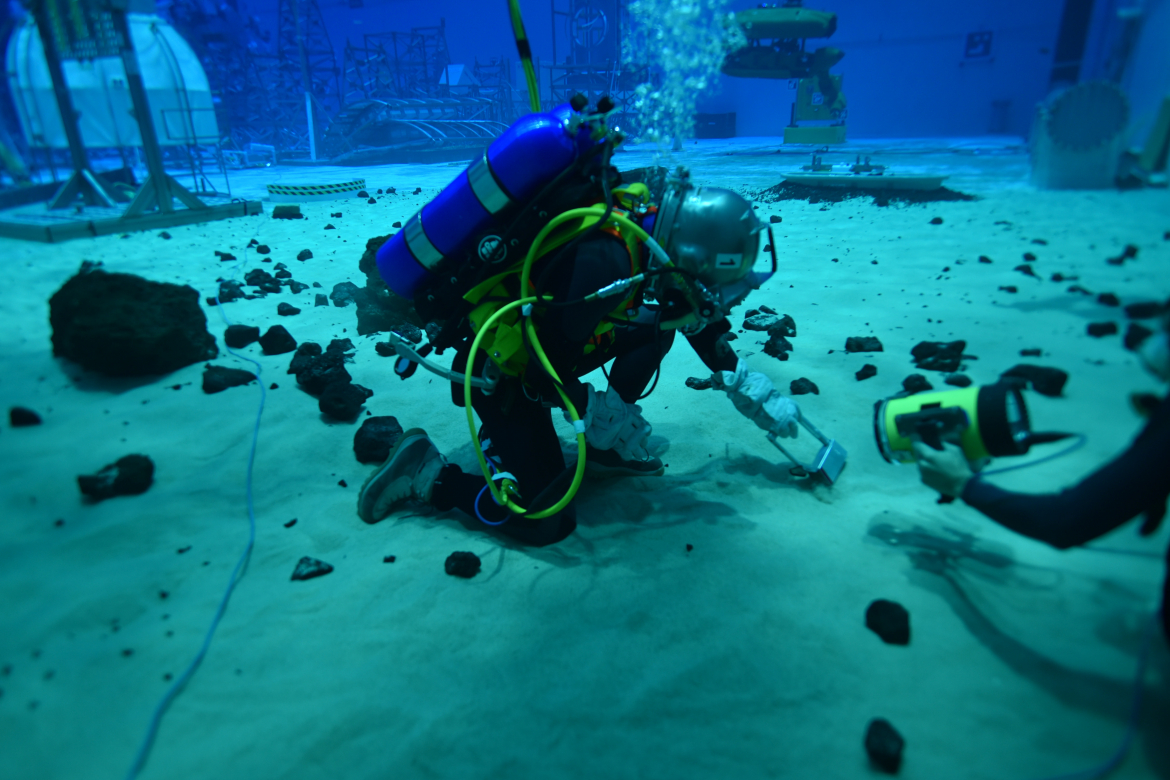 Student teams from around the country have partnered with NASA to test prototype tools for upcoming Artemis missions. This week, students remotely directed divers at the Neutral Buoyancy Lab to test their designs, which addressed a variety of NASA’s needs through the Micro-g NExT program.

This year’s testing was impacted significantly by the COVID-19 pandemic, delaying the test week from June to September. The student teams also did not control the tests from the Neutral Buoyancy Lab’s Test Conductor Room as usual, but rather remotely from mission control centers on their campuses. Despite these obstacles, and much like other NASA programs this year, the teams persevered and successfully tested several student designs with potential uses in the Artemis program.

The Micro-g NExT program is a NASA Science, Technology, Engineering, and Math (STEM) engagement program which challenges teams of undergraduate students to solve problems facing space missions. The teams are tasked with designing, building, and testing a system to support specific aspects of real NASA human spaceflight missions. This year’s challenges focus on the needs of upcoming Artemis missions to the lunar surface.

The testing phase of Micro-g NExT occurs at the Neutral Buoyancy Laboratory (NBL), the underwater training facility used primarily to train astronauts for extravehicular activities (EVAs), or spacewalks. The NBL is located near NASA’s Johnson Space Center in Houston, Texas.

All Micro-g NExT solicitations are intended to help NASA solve real problems for human spaceflight, and student designs originating from this program have flown in space — such as a Micro-g NExT cutter design used by European Space Agency astronaut Luca Parmitano during EVA 59, a spacewalk outside the International Space Station in 2019. The EVA was part of a series of spacewalks to repair the Alpha Magnetic Spectrometer (AMS) experiment. On the spacewalk, Luca used the tool to cut through insulation covering the structure underneath the AMS’s cooling tubes. 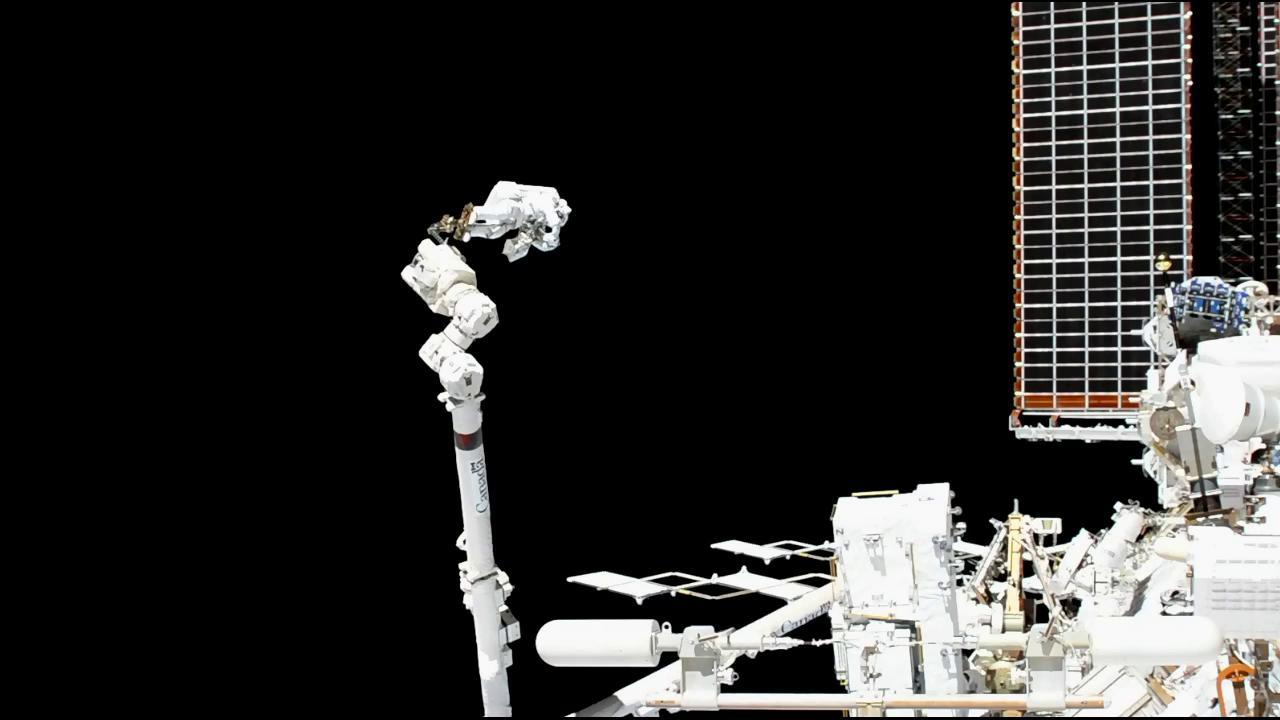 ESA astronaut Luca Parmitano attached to the ISS’s Canadarm during EVA 59, which utilized a Micro-g NExT cutter design – via NASA

Twenty schools were selected by NASA to proceed to testing of their solutions to various challenges in 2020. One of the teams selected was Embry-Riddle Aeronautical University’s Spacesuit Utilization of Innovative Technology (SUIT) laboratory, which developed the Artemis Regolith Receptacle for Contingency Handheld Extraction and Return (ARRCHER).

ARRCHER is a regolith sampling device designed to be used during lunar surface EVAs starting with the Artemis III mission, the first Artemis flight that will include a crewed landing on the Moon. The device would be used in a contingency scenario to ensure at least one sample can be collected on an EVA, even if the crew is unable to complete the nominal mission for any reason.

The SUIT lab team built on their experience in past Micro-g NExT challenges, which included the development and testing of the Specialized Tool for Astronaut Recording (STAR) last year. STAR is a camera attachment mechanism to be used on the International Space Station’s handrails, truss structure, and Crew & Equipment Translation Aid (CETA) carts. NASA sought to solve the problem of limited views of the worksite during spacewalks outside the Station by developing an easy to use attachment mechanism for an additional camera.

In addition to the usual NBL testing performed by NASA test divers, the STAR team was one of two that were selected to be tested by actual NASA astronauts. STAR was tested in the NBL by Victor Glover, who is preparing for his first spaceflight later this year on the first operational Crew Dragon mission, SpaceX Crew-1.

This year’s Micro-g NExT testing looked different than most, as none of the student teams traveled to Houston. While the NBL testing was conducted remotely, the SUIT lab team did conduct multiple underwater tests of ARRCHER prototypes prior to sending the device to Houston. The tests were conducted by the student team in similar conditions to those in the NBL.

The S.U.I.T. Lab has begun a series of underwater scuba tests to verify the design of ARRCHER in an analogous lunar environment. In less than a month ARRCHER will be shipped to @nasajohnson for testiting in the NBL as the finale to this year's #MicrogNExT challenge. Stayed tuned pic.twitter.com/rS9xoEwyi7

The prototype device was then shipped to Houston to be received by the NASA team. After unboxing the device and ensuring all components were present and functioning, the student team and NASA proceeded to the critical Test Readiness Review (TRR).

The purpose of the TRR is primarily to ensure the safety of the NASA teams during the test. Representatives from the SUIT lab and the Micro-g NExT program, including the test divers, were involved in basic familiarization with ARRCHER and the test procedures. There was also an additional dive briefing prior to test day.

On test day, the divers were directed by the SUIT lab student team from a control room on campus in Daytona Beach, Florida. The test diver’s buoyancy suit was configured for lunar gravity (about one sixth of the gravity on Earth), and testing occurred in a section of the NBL pool containing regolith and lunar rock simulant. 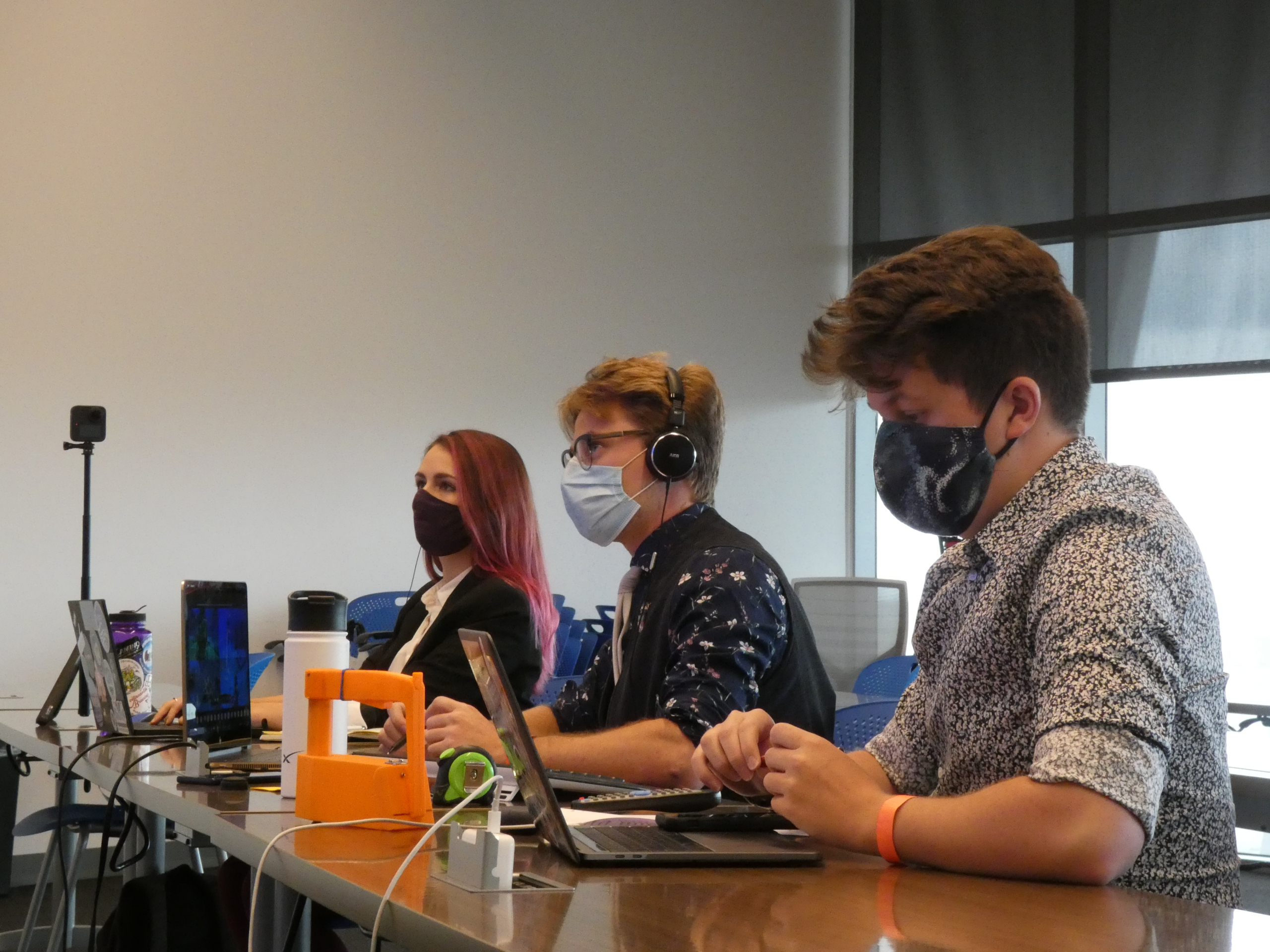 From left to right: Kat Ternus, Nick Lopac, and Niko Blanks, the three students directing ARRCHER testing remotely from a control room in Daytona Beach – via Thomas Burghardt for NSF

The ARRCHER test began with familiarizing the test diver with the basic operation of the device, and then beginning the primary test objectives. This involved unstowing the device from a pocket on the exterior of the dive suit, opening the device to collect a simulant sample, closing ARRCHER to contain it, and restowing the device. The main areas of focus for the test were the robustness of the device and the speed with which samples could be taken.

The ARRCHER team then pursued a secondary test to take two samples from two locations prior to closing and restowing the device. After meeting these objectives, the tertiary testing phase had the diver unstow, collect a sample, and restow ARRCHER in quick succession. All of the test objectives for ARRCHER were met successfully.

Throughout the tests, the NASA test divers provided feedback on the devices to the student team. After all of the student designs were tested completely, a post-test briefing from the diver to each student team provided some final feedback.

(Lead photo of ARRCHER undergoing testing in the NBL via NASA)