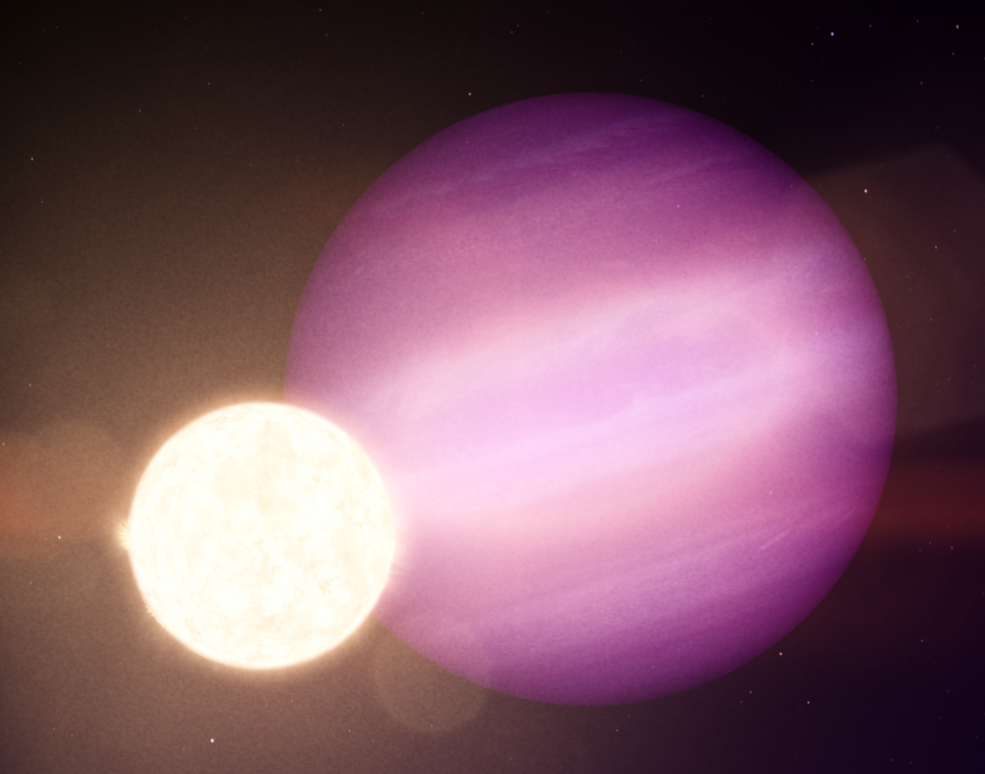 A potential planet… where no planet should be.

So what’s the big deal?  Scientists have found many exoplanets in close orbits of their parent stars.

Here’s the confusing part: The way a white dwarf is created destroys nearby objects either by incineration or gravitational destruction.

White dwarfs form when stars like the Sun near the end of their life cycles.  They swell up, expand to hundreds and even thousands of times their regular size, forming a red giant.

Eventually, that outer, expanded layer is ejected from the star and only a hot, dense white dwarf core remains.

“WD 1856 b somehow got very close to its white dwarf and managed to stay in one piece,” said Andrew Vanderburg, an assistant professor of astronomy at the University of Wisconsin-Madison.  “The white dwarf creation process destroys nearby planets, and anything that later gets too close is usually torn apart by the star’s immense gravity.  We still have many questions about how WD 1856 b arrived at its current location without meeting one of those fates.”

Siyi Xu, an assistant astronomer at the international Gemini Observatory in Hilo, Hawaii, added, “We’ve known for a long time that after white dwarfs are born, distant small objects such as asteroids and comets can scatter inward towards these stars.  They’re usually pulled apart by a white dwarf’s strong gravity and turn into a debris disk.”

“We’ve seen hints that planets could scatter inward, too, but this appears to be the first time we’ve seen a planet that made the whole journey intact.”

The planet was discovered via observations from the NASA/MIT Transiting Exoplanet Survey Satellite (TESS).

TESS examines large portions of the sky for month-long periods.  Scientists then use the images collected from TESS to search for the tell-tale dimming of a star’s observed light output that could indicate the presence of an orbiting planet that happens to be passing between the star and the telescope.

This is known as the transit method of detection, and multiple observations of the same planet are required to make a definitive exoplanet discovery confirmation.

Because of the rapid orbit of WD 1856 b and its prime location just 80 light years away in the northern constellation Draco, TESS collected data on nearly a dozen observable transits.

Knowing they were dealing with a potential first-of-its-kind discovery and that they needed to better understand what kind of a Jupiter-like object they were observing, the international team set out to first confirm beyond reasonable doubt that it was actually a planet they were seeing.

Normally, the best way to do that would be to use radial velocity observations to discern the object’s mass and thereby its potential composition and nature.

However, this white dwarf’s estimated age of roughly 10 billion years makes its light too faint and featureless for scientists to be able to discern the changes needed for radial velocity observation.

Without being able to rely on mass estimates, the team instead turned to infrared observations via NASA’s Spitzer space telescope just a few months before it was decommissioned.

The idea behind using infrared observations via Spitzer is that Jupiter-like objects have an extensive mass range and can be anything from planets a few times more massive than Earth to brown dwarfs to low-mass stars.

By observing in the infrared, the team would potentially be able to eliminate one or two of the three possible classifications of the Jupiter-like object found in the TESS data.

If the object as observed by Spitzer emitted its own infrared glow during the transit of the white dwarf, it would indicate the object was either a brown dwarf or a low-mass star.

If it didn’t, it would point toward the object being a planet… where a planet shouldn’t be.

Additional data obtained from visible light transit information acquired by the Gran Telescopio Canarias in Spain’s Canary Islands as well as the age of the parent star, led scientists to calculate the planet’s size as roughly seven times that of Jupiter.

“The most likely case involves several other Jupiter-size bodies close to WD 1856 b’s original orbit,” said Juliette Becker, a 51 Pegasi b Fellow in planetary science at Caltech.  “The gravitational influence of objects that big could easily allow for the instability you’d need to knock a planet inward.  But at this point, we still have more theories than data points.”

The team was quick to point out that future research and observations would be useful in confirming the conclusion reached that the object in close orbit of a white dwarf is in fact a planet.

Even more fascinating is the potential scientists believe this opens in the field of studying truly exotic exoplanets.

One such potential noted by the international team is the possibility of terrestrial planets — just as WB 1856 b is believed to have done — surviving a white dwarf formation with their atmospheres and environments intact.

If those hypothetical worlds exist, the team notes that NASA’s upcoming James Webb Space Telescope could detect water and carbon dioxide in their atmospheres in just five transit observations.

“Webb could detect gas combinations potentially indicating biological activity on such a world in as few as 25 transits,” said Lisa Kaltenegger, the director of Cornell’s Carl Sagan Institute.  “WD 1856 b suggests planets may survive white dwarfs’ chaotic histories.  In the right conditions, those worlds could maintain conditions favorable for life longer than the time scale predicted for Earth.  Now we can explore many new intriguing possibilities for worlds orbiting these dead stellar cores.”

The TESS spacecraft is a joint operation between NASA and the Massachusetts Institute of Technology.  Built by Orbital ATK, now Northrop Grumman, the observatory was launched on 18 April 2018 aboard a Falcon 9 rocket from Cape Canaveral Air Force Station, Florida.

As of 16 September 2020, TESS data has revealed 68 confirmed exoplanets and an additional 2,174 exoplanet candidates.

NASA Spitzer space telescope was a joint effort between the agency as well as the Jet Propulsion Laboratory and Caltech.  Launched aboard a Delta II rocket from Cape Canaveral Air Force Station, Florida, on 25 August 2003, the two and a half year mission ended up lasting 16 and a half years before the telescope was decommissioned on 30 January 2020.