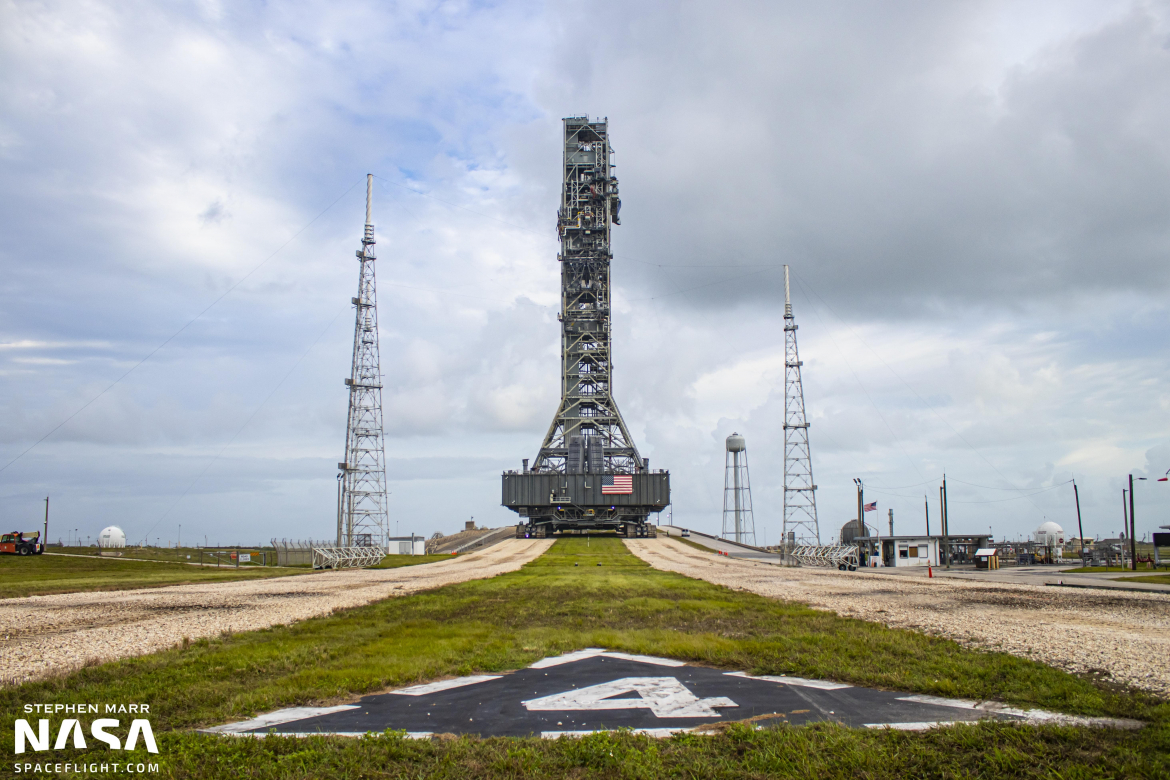 NASA’s Mobile Launcher-1, or ML-1, has rolled back to the Vehicle Assembly Building after completing a series of tests at Launch Complex-39B (LC-39B). This marks the last trip to the launch pad for ML-1 until the first fully stacked Space Launch System rocket rolls out for the Artemis I mission.

Just after midnight on October 20, ML-1 began its rollout from the Vehicle Assembly Building (VAB) to LC-39B. The mobile launcher was carried from High Bay 3 in the VAB out to LC-39B atop Crawler Transporter-2, or CT-2. CT-2 is one of two Crawler transporters in existence, both of which supported the Apollo and Space Shuttle programs before taking on similar roles for Artemis.

The crawler slowly made its way along the 4.2-mile (6.8 km) crawlerway and arrived at LC-39B later in the morning. The rollout was conducted by personnel from NASA Exploration Ground Systems and Jacobs, with the goal of preparing for wet dress rehearsal and launch operations for Artemis I next year.

The mobile launcher has officially begun it's 4.2-mile journey to Launch Pad 39B. What a sight! 😍 pic.twitter.com/MIVZpQsPYp

ML-1 spent a total of ten days at LC-39B undergoing several tests. One such test validated the launch team’s countdown timeline, taking advantage of an opportunity to rehearse pre-launch tasks using both ML-1 and LC-39B systems together.

There were some tests and operations at the launch pad below where the launch vehicle will sit. This included testing the engine service platform. This platform rests under where the four Aerojet Rocketdyne RS-25 engines will be located when the SLS booster is on the mobile launcher. The platform allows for access to the four RS-25 prior to launch. The engine service platform was lowered from the mobile launcher and into its launch position for the test.

While ML-1 was at the pad, the deflectors were moved to the launch position underneath where the Solid Rocket Boosters will be placed. Each of the new deflectors also have extendable supports for the mobile launcher, which assist in handling the intense loads at liftoff. Those supports were also tested.

Other systems tested included the mobile launcher’s umbilical arms, which provide propellant, electricity, and data connections to the rocket during the countdown.

In order to remove possible Foreign Object Debris, or FOD, a thorough washdown of the entire mobile launcher was also completed. The potential for FOD arose during the construction and then subsequent installation of the umbilical arms.

The washdown was accomplished using the mobile launcher’s fire suppression system. The high-pressure water suppression system washed the potential debris and FOD into the flame trench and then the percolation ponds and wastewater retention tanks. This is an added safety measure on top of the manual walk downs, which will be performed prior to every launch.

The fire suppression system on ML-1 was also recertified, the last time it was certified was in 2019, and so a recertification prior to the launch of Artemis I was due. 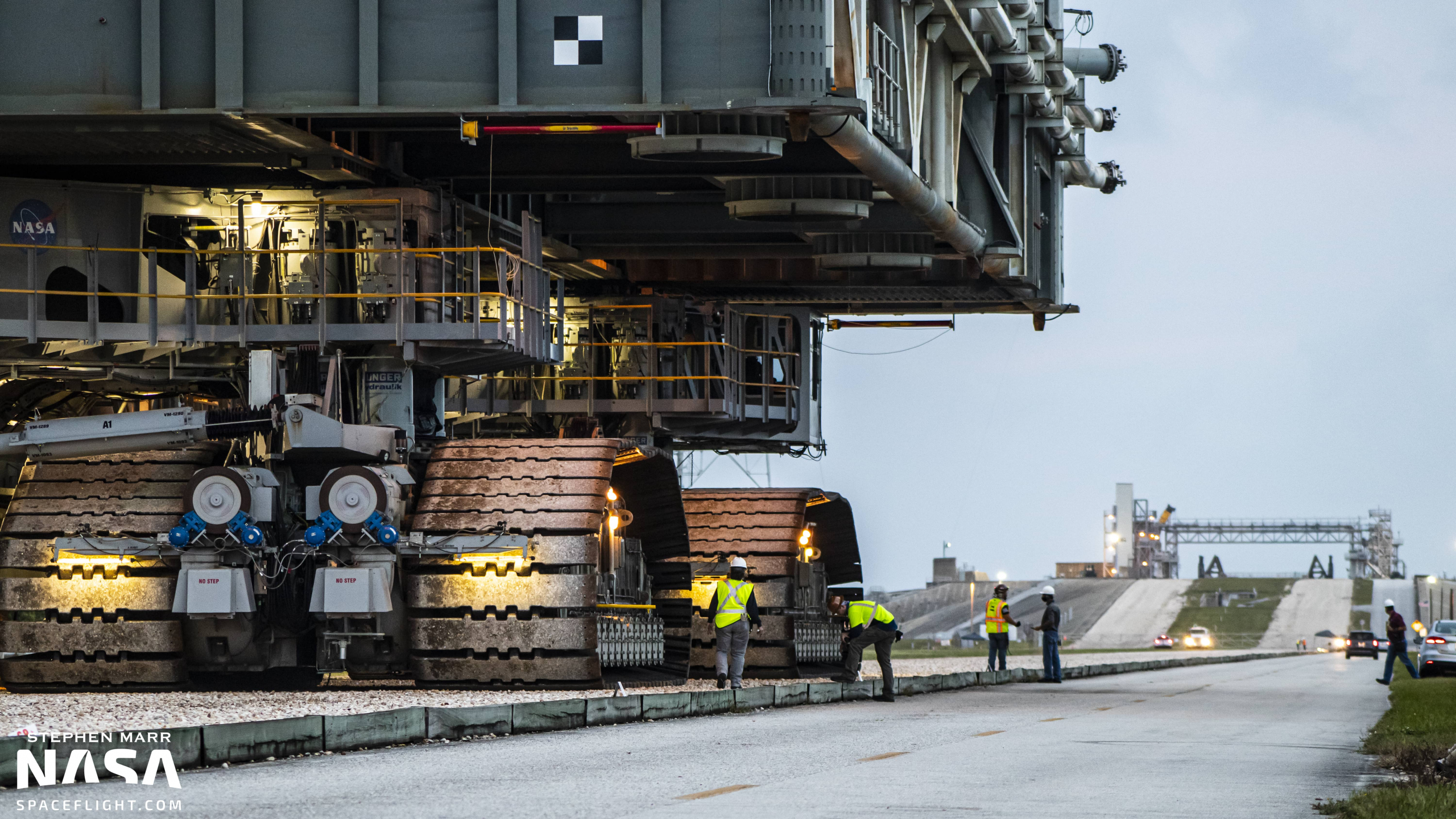 Mobile Launcher-1 was originally built by Hanstel Phelps and was designed to support the Constellation Program’s Ares I rocket. Construction lasted between 2009 and 2010. After Constellation’s cancellation in favor of what is now named Artemis, ML-1 has been prepared to support SLS Block 1, the initial variant of the Space Launch System rocket tasked with launching NASA’s Orion crew vehicle to the moon.

Both LC-39A and LC-39B were built for the Apollo program and were completed by 1968. Both pads were built in a “clean pad” configuration, meaning all of the launch vehicle’s service structures would roll out with the rocket on mobile launch platforms.

Both pads were then modified for the Space Shuttle Program. Construction on the Fixed Service Structure (FSS) at LC-39B began in 1979. Some of the FSS was from the upper section of the Launch Umbilical Tower from the Apollo-era ML-2. A Rotating Service Structure was also built.

The last launch from LC-39B was the Ares-1-X test launch on October 28, 2009. That launch was the second and final launch of the Constellation program, after the Max Launch Abort System (MLAS) Pad Abort test. After this, LC-39B began its modifications back into a clean pad.

These site modifications included the construction of three lightning towers and the demolition of both the FSS and RSS. One major piece of shuttle-era infrastructure that remains is the North Piping Bridge that spans the Flame Trench.

While ML-1 is catered to host SLS Block 1 launches – or which there will be three or four in the schedule through to around 2025, it won’t be modified for SLS Block 1B.

Instead, NASA has ordered the construction of a second Mobile Launcher (ML-2), with parts already arriving at KSC. The fate of ML-1 after the transition to the Block 1B version of SLS is currently unknown.

As Starships line up, Musk calibrates expectations for SN8 test