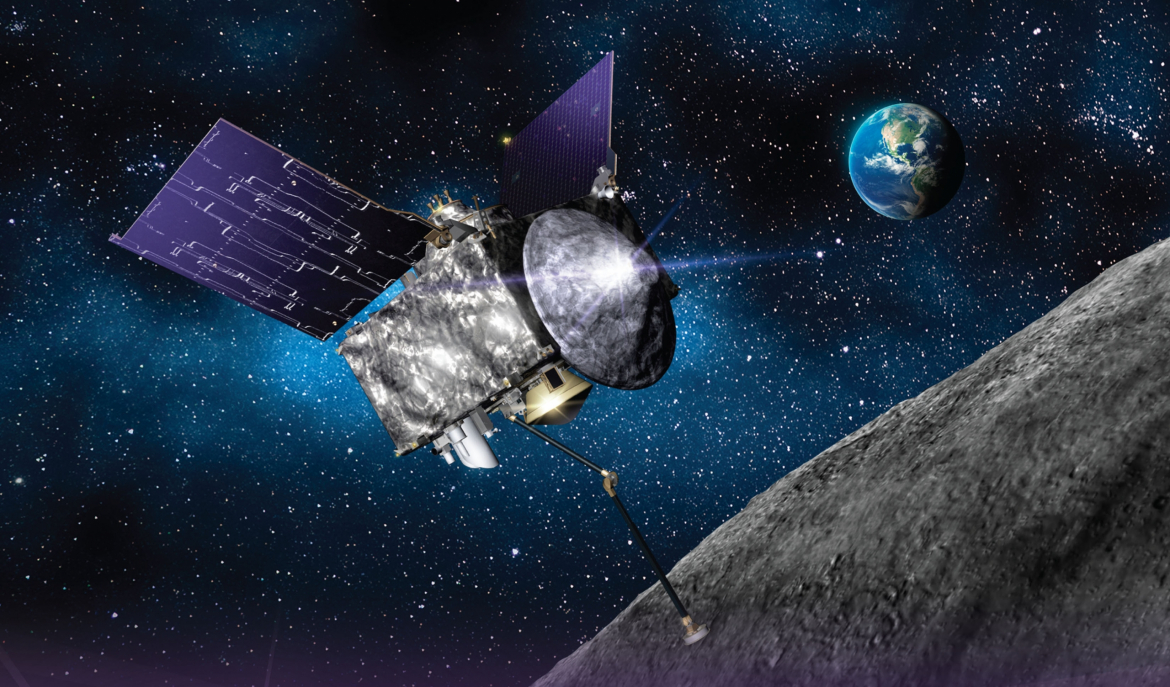 OSIRIS-REx — an international sample-return mission led by NASA and joined by science team members from Canada, France, Germany, the United Kingdom, and Italy, and with an instrument provided through the Canadian Space Agency — has completed the Touch-And-Go sample collection maneuver to return portions of asteroid Bennu to Earth.  Physical contact between the craft and Bennu for sample collection occurred at 17:53 EDT (21:53 UTC) on 20 October.

Since arriving in orbit of Bennu on 31 December 2018, the NASA-led OSIRIS-REx mission has observed the near Earth object, asteroid Bennu, with a suite of scientific sensors and instruments, designed not just to study and transmit data about the asteroid back to Earth, but also to meticulously map its surface in high detail ahead of the Touch-And-Go (TAG) sample collection event, on 20 October.

The TAG operation began at 13:50 EDT (17:50 UTC) when OSIRIS-REx fired its maneuvering thrusters for an Orbit Departure burn to lower its safe-home orbit of 770 m above Bennu’s surface down toward the asteroid’s surface.  Live coverage showing animation of real-time events by NASA started at 13:20 EDT (17:20 UTC).

During this initial phase of descent, the spacecraft began a sequence of reconfigurations to prepare itself for the sampling TAG.  The first saw OSIRIS-REx extend its robotic sampling arm (the Touch-And-Go Sample Acquisition Mechanism — or TAGSAM) from its folded, stored position out to its sample collection position.

The spacecraft then folded its solar panels into a y-wing configuration over its body – a maneuver that both kept the arrays safely away from the asteroid’s surface and also repositioned the craft’s center of gravity directly over the TAGSAM collector head.

After this, OSIRIS-REx reached a checkpoint position 125 m above Bennu’s surface.  The craft then performed the Checkpoint Maneuver burn to begin a steep but slow vertical descent that brought it to a point 54 m above Bennu 11 minutes later.

Here, OSIRIS-REx performed the Match Point burn to slow its descent and align its path to match the asteroid’s rotation at the time its onboard navigation system plans for it to contact the sampling location.

That area, named Nightingale by the science team, is a 16 m diameter wide rocky area in Bennu’s northern hemisphere.  The site was chosen for its large amounts of unobstructed fine-grain material; however, building-sized boulders surround the area and will present a navigation challenge to the vehicle as it attempts to touchdown within an area the size of “a few parking spaces” and within “a few steps” of the boulders, noted NASA.

What’s more, just as spacecraft landing on Mars have to perform the entire sequence autonomously, so too does OSIRIS-REx.  For the TAG sample attempt, the spacecraft was approximately 334 million kilometers (207 million miles) from Earth with a one-way communication time of 18.5 minutes (37 minutes round trip).

Given the communication lag and the tight clearances expected at the touchdown location, OSIRIS-REx’s autonomous navigation system, called Natural Frequency Tracking (NFT), gathered real-time navigation images of the local terrain and compare them to the onboard image catalog already obtained of the asteroid and landing site.

This kept the craft on course for the touchdown location at Nightingale.  If NFT detects that the spacecraft is flying off course, it will automatically initiate an abort to take OSIRIS-REx into a safe and stable orbit.

If all is going well with the descent, a hazard map of the Nightingale site has also been uploaded to the NFT, which will allow it to know in real-time on the day if the spacecraft is drifting toward one of those hazard areas and initiate an abort if needed. 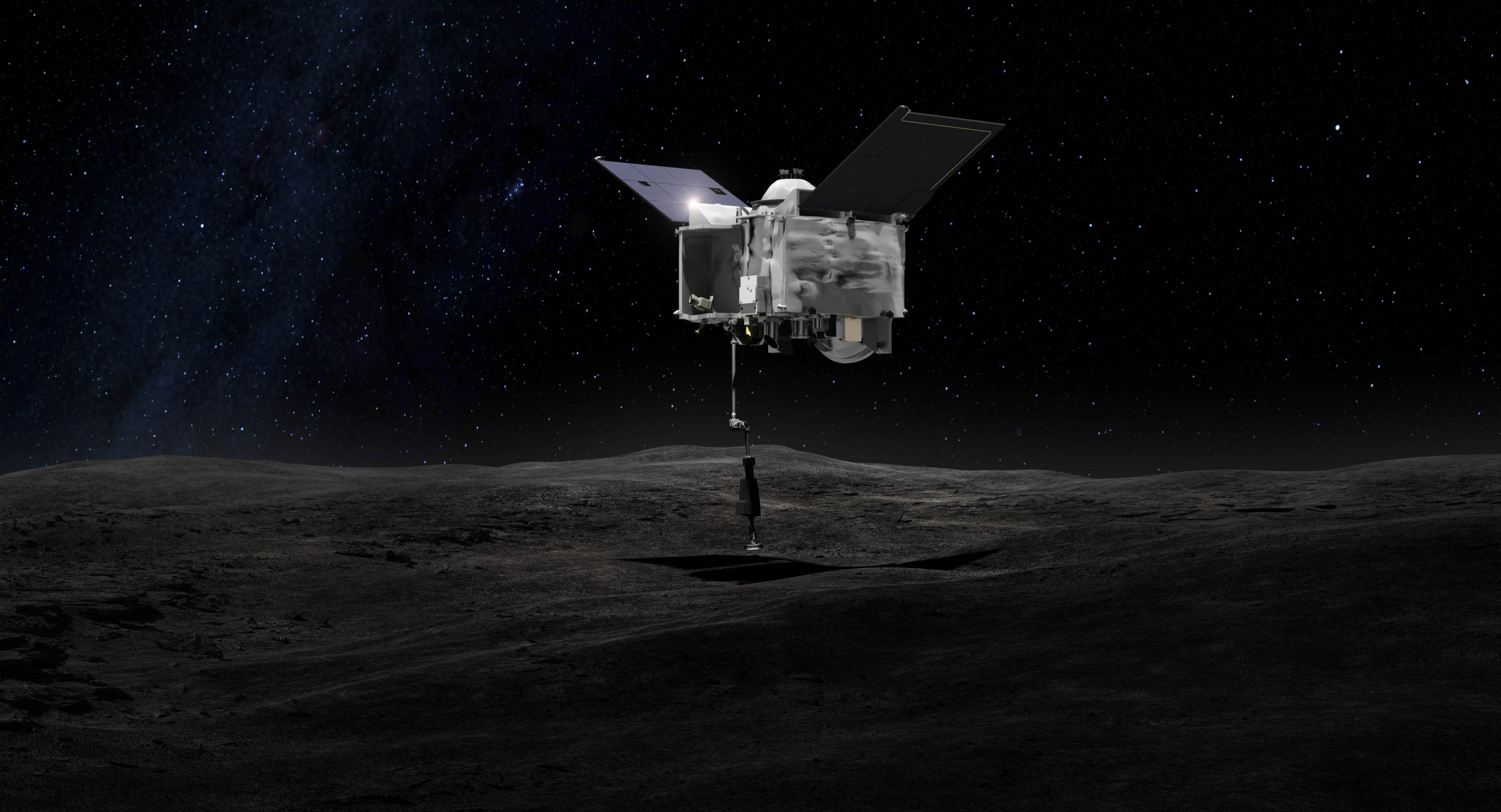 As everything went to plan, the only portion of OSIRIS-REx that actually made contact with Bennu’s surface is TAGSAM.  A total of 60 grams (2 oz) of asteroid material is expected to be collected.

After a good TAG attempt on 20 October, mission controllers will use OSIRIS-REx’s SamCam camera to take pictures of the TAGSAM collector head to see if it contains any material from Bennu.  If it does, a spin maneuver of OSIRIS-REx will be performed on 24 October to determine the mass of the collected material.

If the mass measurement shows a good sample collection, the material will be placed into the Sample Return Capsule for the journey back to Earth.  If enough material has not been collected, there is enough maneuvering ability for two additional attempts.

Under the present schedule, OSIRIS-REx will leave Bennu in 2021 and bring the Sample Return Capsule back to Earth for the capsule’s 24 September 2023 landing at the Utah Test and Training Range.

Just days after arriving in orbit of Bennu, OSIRIS-REx observed something unexpected: a cloud of tiny particles that had been ejected from the asteroid’s surface.  As the mission progressed, more and more of these ejected particles were observed by the spacecraft and team.

“We thought that Bennu’s boulder-covered surface was the wild card discovery at the asteroid, but these particle events definitely surprised us,” said Dante Lauretta, OSIRIS-REx principal investigator, of the discovery detailed earlier this month in a series of papers published in the Journal of Geophysical Research: Planets.  “We’ve spent the last year investigating Bennu’s active surface, and it’s provided us with a remarkable opportunity to expand our knowledge of how active asteroids behave.”

Over 300 particle ejection events have been observed from Bennu’s surface by OSIRIS-REx since it arrived at the near Earth object — the majority of which occurred toward the end of the local two-hour afternoon period.

So fascinating was this discovery that teams began using a navigation camera called Touch-And-Go Camera Suite to actively spot particles in the vicinity of Bennu, something it was not originally intended to do.  The 6 cm (2 in) diameter size of the particles is not a threat to the spacecraft due to the extremely low velocities at which they move (20 centimeters/8 inches per second).

Ground-based observations prior to OSIRIS-REx’s arrival hinted at the possibility of an active near Earth object based on predicted thermo-cycling conditions that occur every 4.3 hours as Bennu completes one rotation around its axis.

In examining the data collected by OSIRIS-REx of the ejecta events, three possible underlying causes were identified by the authors of the studies: the release of water vapor, impact by small meteoroids, or surface rocks cracking from thermal stress.

Of the three possibilities, the team currently believes the second two are the most likely, with the final one — thermal stress cracking of surface rocks — being a major driver of the events.  This is based on OSIRIS-REx observations and timing of the ejecta events, which occur with greater frequency during the late afternoon period when rocks are heating up and have the greatest chance of cracking due to thermal stress.

As noted by the team, the findings could serve as a cornerstone for future planetary missions that seek to better characterize and understand how these small bodies behave and evolve.