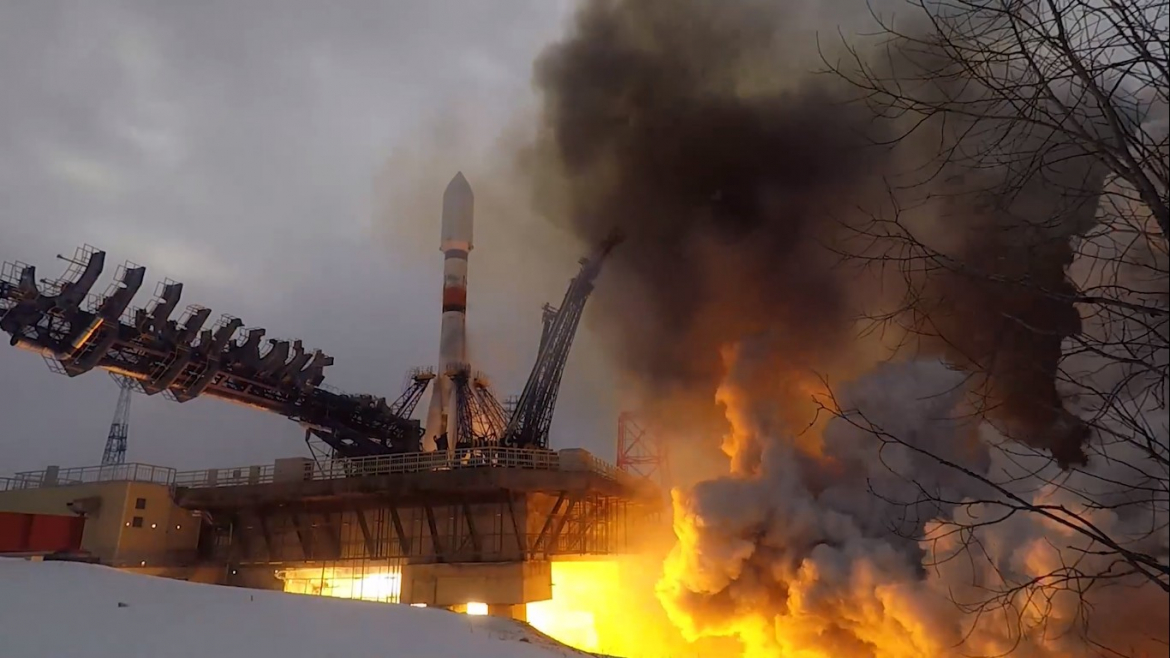 Liftoff of the Uragan-K No.15L satellite, aboard a Soyuz 2-1b/Fregat rocket, took place at 23:08:42 Moscow Time (19:08:42 UTC) from the Plesetsk Cosmodrome in the northwest of the country. Spacecraft separation is expected to occur a little over three and a half hours after launch.

GLONASS is Russia’s global satellite navigation system, analogous to the US Global Positioning System (GPS) and European Galileo constellations; like its counterparts, it is available for both military and civilian use.

GLONASS was begun by the Soviet Union in the 1970s, with the first satellite reaching orbit in 1982. The name GLONASS is the abbreviation of Globalnaya Navigatsionnaya Sputnikovaya Sistema – or Global Navigation Satellite System – while individual satellites are named Uragan, meaning Hurricane.

The earliest Uragan satellites had a design life of only three years, launching in trios atop Proton-K carrier rockets. This short lifespan, combined with the fallout from the end of the Soviet Union, at which point the project was inherited by Russia, meant that by the mid-1990s satellites were failing faster than they could be replaced, and the constellation fell into disrepair.

Upgraded second-generation Uragan-M satellites were introduced in 2001, providing new capabilities and a much extended lifespan. These satellites form the backbone of the GLONASS system, which has now been restored to full capacity.

Sunday’s launch carried a third-generation Uragan-K satellite, Uragan-K No.15L, which is the third Uragan-K to be launched. This class of satellite was originally intended to consist of two prototype satellites for on-orbit testing in an operational environment prior to the entry into service of the operational Uragan-K2 series. Delays to the Uragan-K2 project have led to Russia ordering 11 additional Uragan-K satellites, including No.15L – which will be pressed into service.

The Uragan-K satellites are constructed by ISS Reshetnev and are based around the Ekspress-1000K satellite bus. The 935 kilogram (2,061 pound) spacecraft have design lives of at least 10 years.

Power comes from twin solar arrays, deployed on either side of the satellite once it is established in orbit.

Each satellite in the GLONASS constellation is equipped with caesium atomic clocks to provide accurate times for its navigation signals. Those signals are broadcast in the L band, with L1, L2, and L3 signals being transmitted respectively at frequencies around 1,602 megahertz, 1,246 megahertz, and 1,202 megahertz – with the exact frequencies varying satellite-to-satellite.

GLONASS’ L1 signals consist of L1OF, which is an open and unrestricted civilian signal freely available to any user. Meanwhile, L1SF is a more precise encrypted signal for Russian and allied military users. The L2 signals are likewise divided into L2OF and L2SF, while the L3 signal only has a civilian version – L3OC.

GLONASS satellites can be launched on Proton rockets, which could carry up to three of the heavier previous-generation spacecraft, or individually on Soyuz-Fregat vehicles. When the Uragan-K and K2 satellites were first designed, dual-satellite launches aboard the Soyuz had been envisioned; however, increases in the mass of the spacecraft during the project’s development ruled out this option. 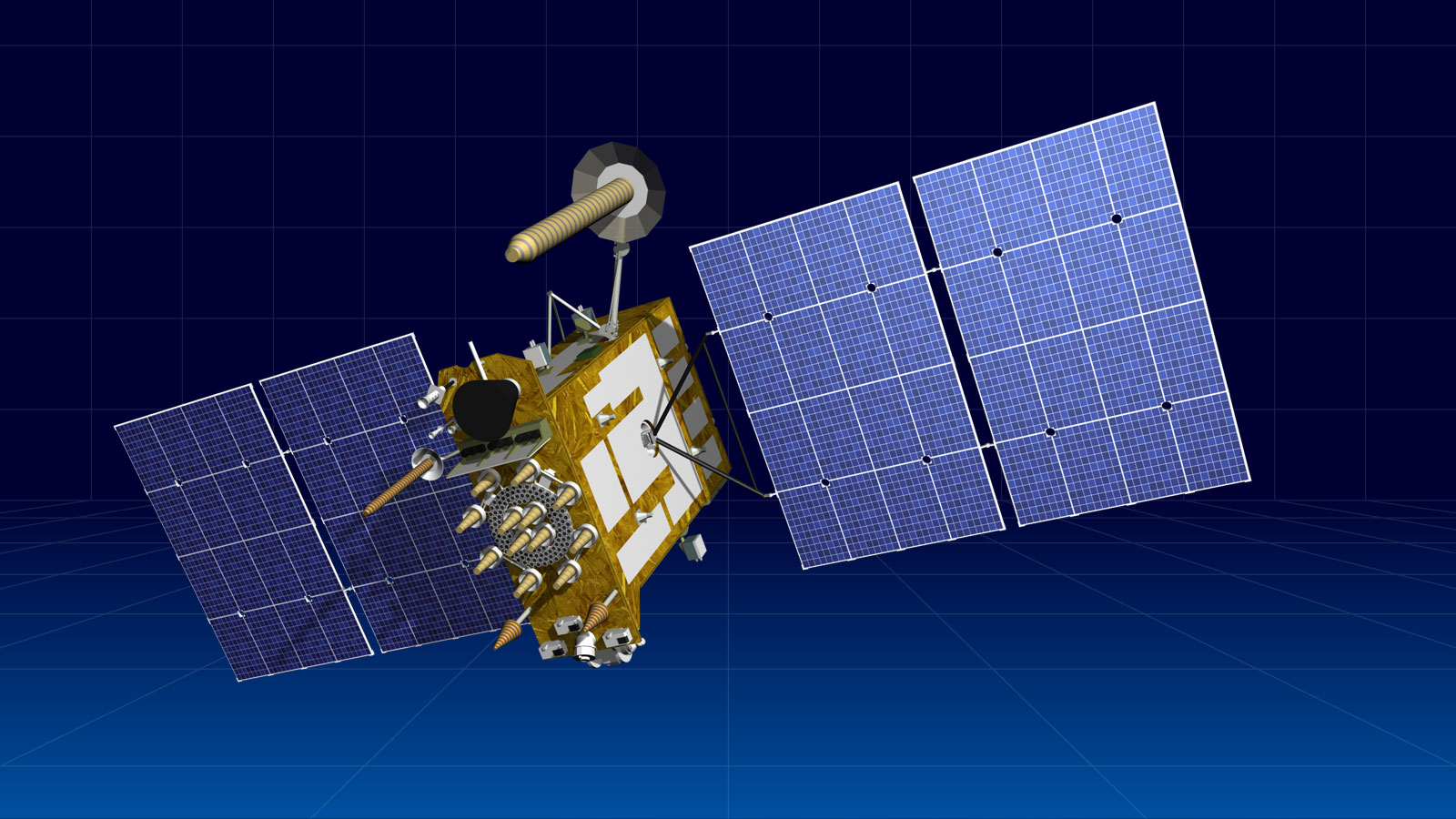 Sunday’s launch was made by a Soyuz 2.1b rocket with a Fregat upper stage. It launched from Site 43/3 at the Plesetsk Cosmodrome.

Located in northwest Russia 800 km north of Moscow, Plesetsk is Russia’s primary launch site for military missions. Site 43 houses two operational Soyuz launch pads, which were originally built for operational deployment of R-7A missiles in the 1960s. While the R-7 quickly became obsolete as a missile, the family of satellite launchers that have been developed from it – including Soyuz – continue to serve as the workhorses of Russia’s civilian and military space programmes to this day.

Pad 43/3 returned to service in December 2019 after having been taken offline 18 years prior when it was damaged by falling debris from the failure of a Soyuz-U rocket that was to have carried a Foton-M research satellite into orbit. As well as repairing the pad, this extended period of maintenance saw it upgraded to accommodate the newest versions of the Soyuz rocket, including the 2.1b configuration that it launched on Sunday.

The three-stage Soyuz 2.1b core vehicle was topped with a Fregat upper stage for the GLONASS launch. The Fregat, when used in conjunction with Soyuz, allows satellites to be placed into higher or more complex orbits than could be achieved using just the core vehicle. In the case of GLONASS missions, this means the insertion of payloads directly into their operational medium Earth orbits, 19,100 kilometers (11,900 miles) above the planet.

Soyuz began its ignition sequence about 16 seconds before liftoff, with both the boosters and Blok-A stages lighting their engines simultaneously. Each booster had a single RD-107A engine, while the Blok-A stage was powered by an RD-108A, a version of the same engine which adds four vernier nozzles to help guide the rocket during ascent. Both burned RG-1 – the Russian specification for rocket-grade kerosene (RP-1) – and liquid oxygen. 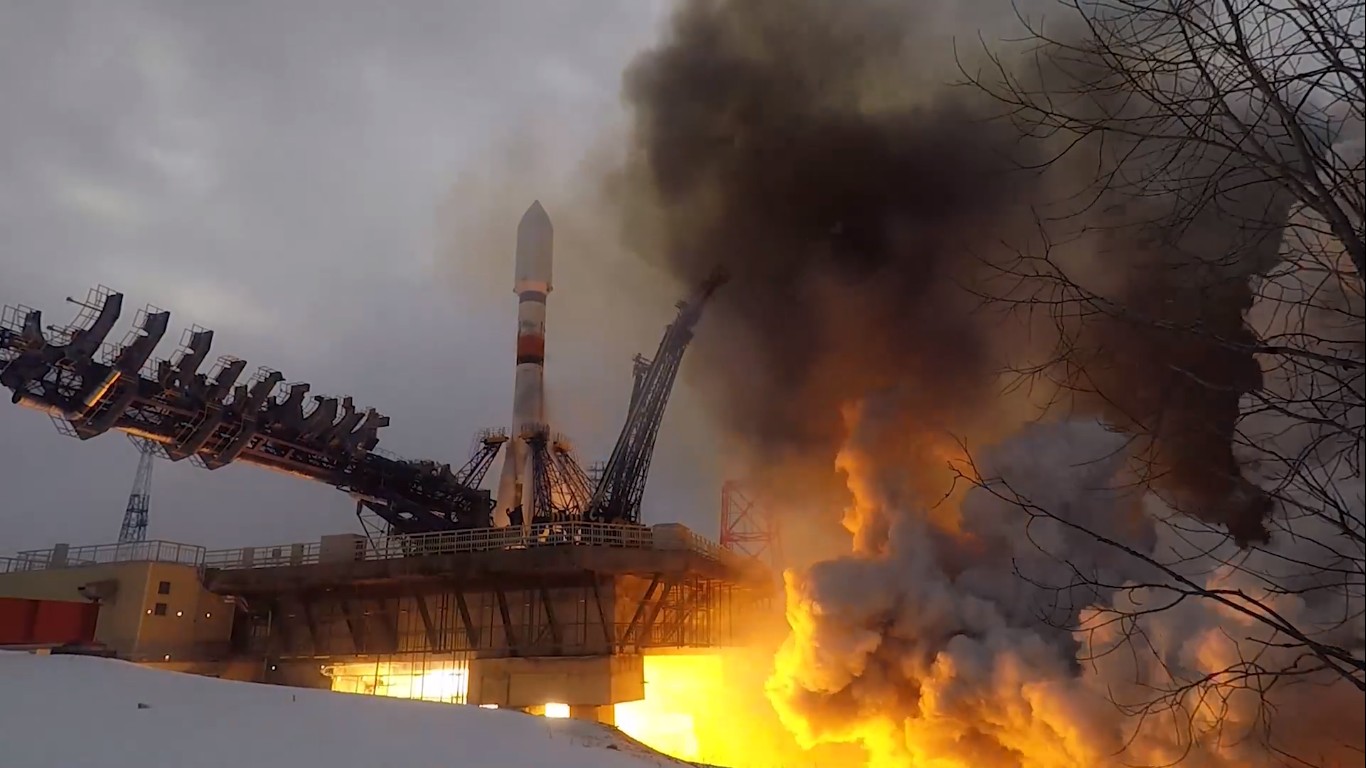 A Soyuz rocket lifts off from Site No. 43/3 at Plesetsk. (Credit: Ministry of Defense of the Russian Federation)

During the 16 seconds between ignition and liftoff, the five engines built up to full thrust. With this achieved, the launch pad’s four swing arms opened, and Soyuz began to climb away from Plesetsk. Pitching downrange, Soyuz flew for the first 120 seconds before booster shutdown and separation occurred. After this, Blok-A stage continued firing for another 170 seconds to propel Soyuz towards orbit.

At the end of the Blok-A stage burn, Soyuz carried out a hot staging event, igniting its Blok-I stage engine while the Blok-A’s engine was still burning. This is a design feature of the Soyuz – and several other Russian rockets – which helps ensure that propellant in the Blok-I stage remains settled through separation without needing to carry dedicated ullage motors for this purpose. The lattice interstage between the Blok-A and -I stages of Soyuz is designed with this in mind, allowing exhaust gasses to escape through the sides.

The Blok-I stage of Soyuz 2.1b was powered by an RD-0124 engine, also burning RG-1 and liquid oxygen. Its burn lasted for just under 5 minutes. Following shutdown of the Blok-I stage, Fregat separated to carry out its role in the mission.

The Fregat used storable propellant – unsymmetrical dimethylhydrazine and dinitrogen tetroxide – and was fitted with a restartable S5.98M engine. During Sunday’s mission, Fregat will make three burns. The first began about a minute after its separation from Soyuz, likely lasting about 20 seconds to insert itself and its payload into an initial parking orbit.

From this parking orbit, Fregat will make a nine-and-a-half minute second burn to raise its apogee, coasting up to this altitude and then firing again for another four and a half minutes to circularise the orbit. Spacecraft separation is expected to take place about three and a half hours after liftoff.

Sunday’s launch was Russia’s 12th of the year, 11 of which have been carried out by Soyuz rockets. The next Soyuz launch is currently scheduled for the middle of November, with the Soyuz 2.1b/Fregat configuration being used again to deploy three Gonets-M communications satellites and a host of secondary payloads.

The next GLONASS launch is expected in December 2020, with another Uragan-K satellite launching to replenish the constellation.

SpaceX Starship: The Continued Evolution of the Big Falcon Rocket