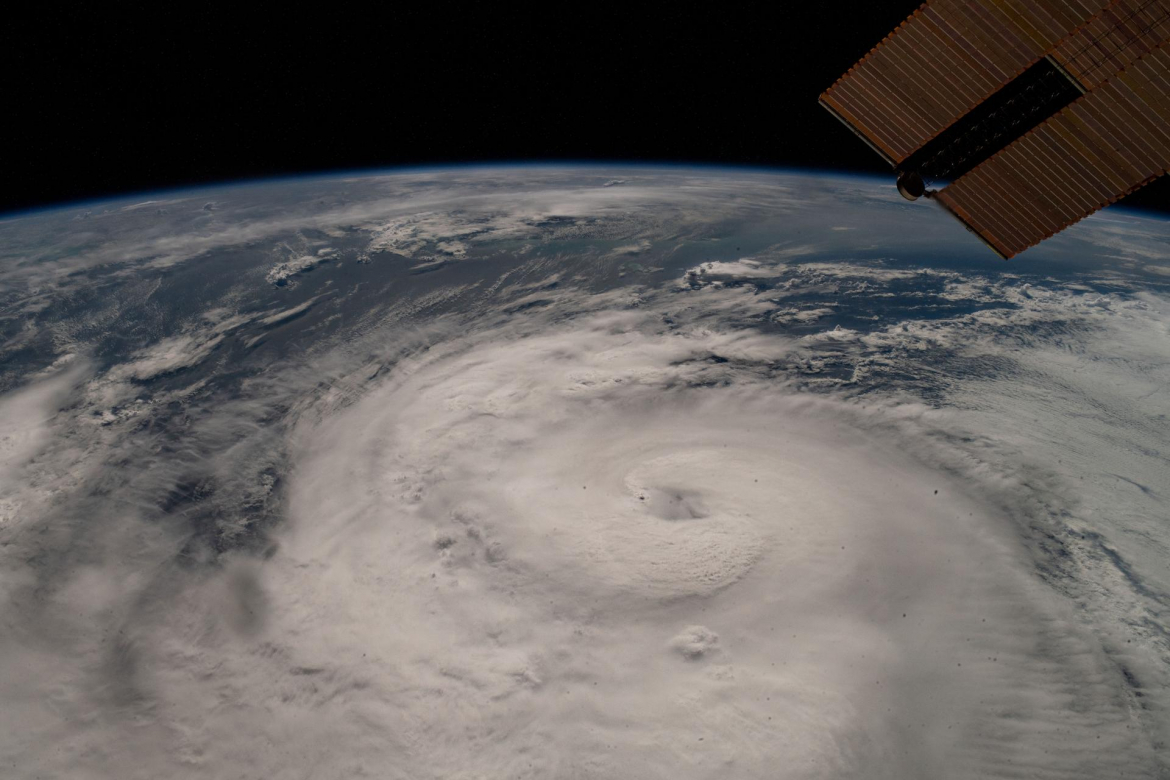 The law of averages caught up to the New Orleans area and the two NASA facilities located nearby when Hurricane Zeta roared directly through them on the evening of October 28 as a Category Two storm. Several tropical weather systems had spared the Michoud Assembly Facility (MAF) in New Orleans East and the Stennis Space Center in Southern Mississippi from substantial impacts over the last four months. Still, both facilities and the Space Launch System (SLS) Core Stage for Artemis 1 saw some of Zeta’s worst weather when the eyewall of the late season hurricane plowed through.

Zeta was the latest hurricane to disrupt testing in the Green Run campaign for the Core Stage at Stennis; work was stopped for the sixth time by tropical weather this 2020 Atlantic hurricane season. While the storm was developing in the Caribbean last week, NASA and prime contractor Boeing were discussing technical issues revealed during Summertime Green Run testing. They will now also have to factor cleanup efforts into their go-forward plans for the final two Green Run tests.

Zeta was the third hurricane and fifth tropical system to make landfall in Louisiana. Still, it was the strongest to directly impact the New Orleans area, with the center of the storm passing over the city, MAF in New Orleans East, and then Stennis in Southern Mississippi not far from there. Weather models were in good agreement about the forecast track of the storm, but Zeta intensified more than forecast, with the storm rapidly increasing to Category Two intensity just below the Category Three threshold near landfall.

In contrast to earlier tropical storms this year that crept through the Gulf of Mexico prior to landfall, Zeta was moving at a forward speed approaching 25 miles per hour when it hit southeast Louisiana on the evening of October 28. While the hurricane’s accelerating speed shortened the time that locations were exposed to the worst storm conditions, it also allowed Zeta to maintain a higher intensity level farther inland.

Both Michoud and Stennis took a beating from Hurricane Katrina in August, 2005, and more recently SLS production and final assembly areas at MAF took a direct hit from an EF-3 tornado in February, 2017.

Preliminary reports from Zeta’s impact clocked winds of 112 miles per hour at a reporting station near MAF during the worst of the beating by the storm’s eyewall. Winds in the 90 miles per hour range were recorded when the eyewall reached the Stennis area. 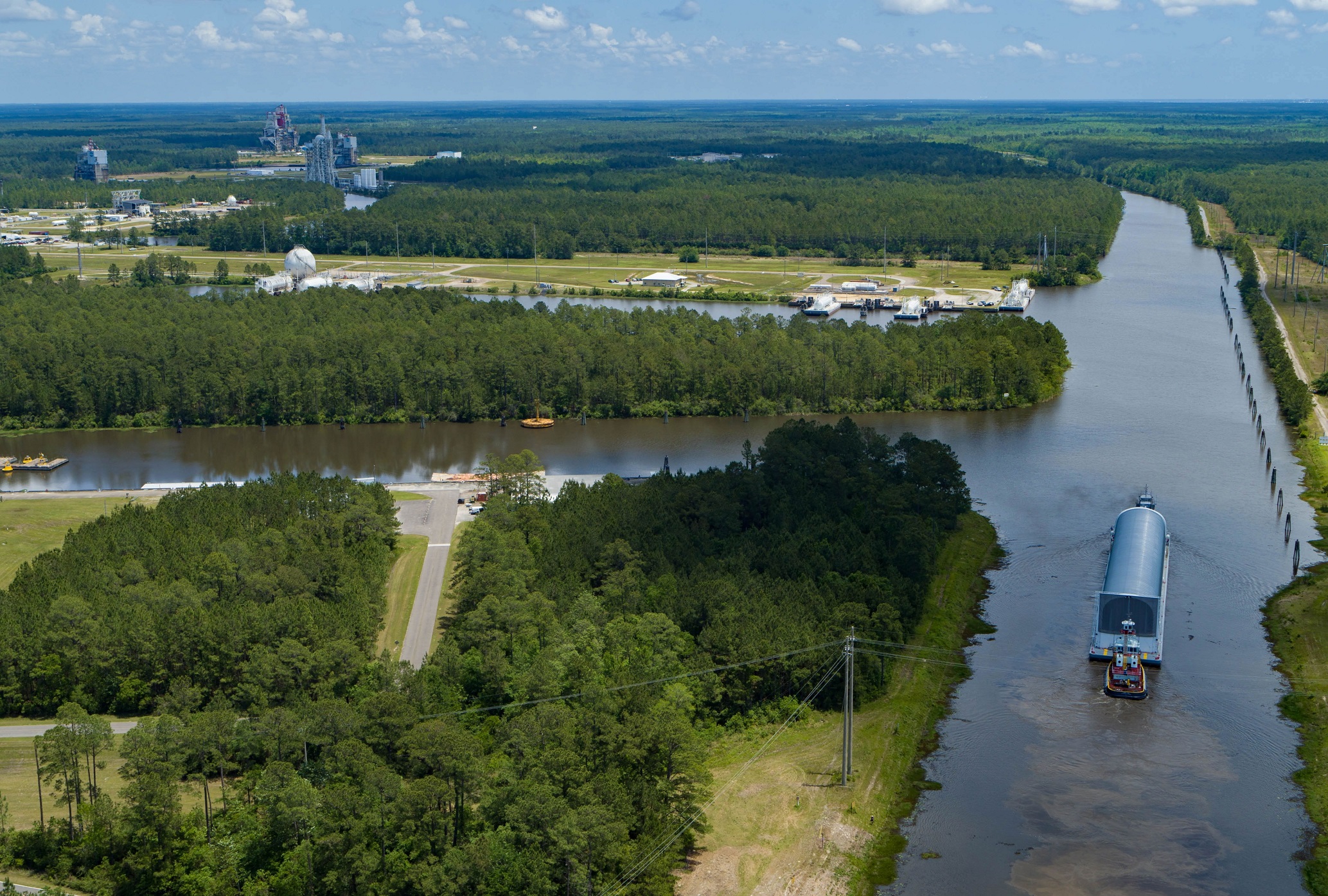 (Photo Caption: Some of the Stennis Space Center test facilities are seen in the distance in the upper left of this image from May, 2019. Tugboats moved the Pegasus barge towards the B-2 Test Stand, which is the farthest in the background here looking from west to east. Hurricane Zeta passed directly through Stennis with winds near 100 miles per hour in the evening of October 28.)

For the sixth time during the 2020 Atlantic Hurricane season, Boeing and NASA were forced to stop work on Core Stage-1 for the Green Run, take down platforms and scaffolding, secure vehicle doors, and otherwise batten down the hatches. The stage is the most exposed SLS flight hardware in the area since it is installed in an outdoor test stand for the Green Run test campaign duration.

Indoor assembly and production of Core Stage-2 at MAF was also suspended and both locations closed prior to the storm with only rideout crews remaining on site while Zeta passed through.

It typically takes three days to secure the vehicle and the work area for tropical storm-force winds and another three days to reconfigure for normal work after personnel are allowed to return; however, with Zeta’s direct hit on the space center and Stennis federal city, some recovery efforts could also take priority. Reconfiguring the test area and the Core Stage to get back to work may have to wait until after damage assessments are completed, along with restoring power to facilities, road cleanup, and any other necessary repairs of infrastructure.

Despite Zeta’s direct hit, early inspections at Stennis of the test stands and flight hardware there are encouraging. “Preliminary assessments reported no damages to the test complex and support facilities,” Valerie Buckingham, NASA Stennis News Chief reported. “However, site assessments are still being conducted.”

An initial assessment of conditions at Michoud after the hurricane was not yet available.

Hurricane Zeta’s landfall came in the middle of analysis, troubleshooting, and discussions about issues seen during previous Green Run test cases. Following a two-month standdown due to the first wave of the COVID-19 pandemic, the stage was first powered up in the stand in late June to start top to bottom integrated testing of stage systems. This was followed by propulsion system checkouts that were repeatedly interrupted in August and September by tropical weather system threats.

A set of countdown simulation runs, test case six of a total of eight, was completed at the beginning of October to exercise the test team and updated ground control system software, but the issues were originally seen before that. NASA and Boeing are still discussing them and analyzing data; decisions about how to proceed had not been made at the time of publication.

One issue involves one of the four liquid hydrogen (LH2) prevalves that isolate the LH2 tank from the LH2 inlets of each of the four RS-25 Core Stage engines before engine start. The prevalves open just before engine ignition and then feed propellants to the engines while they are firing. The SLS Program is continuing to discuss troubleshooting data and options to resolve the issue. 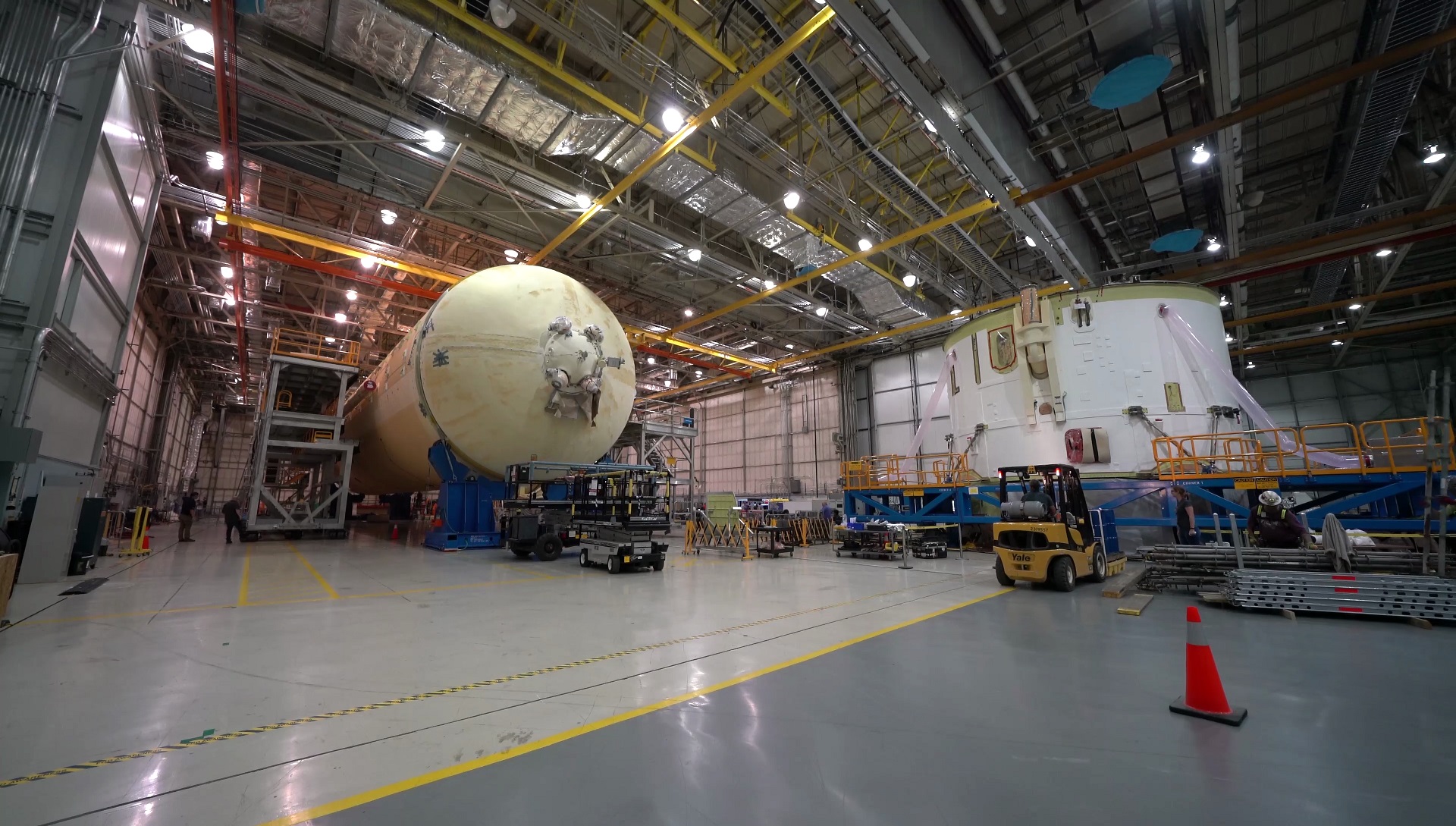 (Photo Caption: Image of the Core Stage-1 LH2 tank (left) and the engine section/boattail (right) in May, 2019, at MAF. The four LH2 prevalves can be seen on the tank’s aft manifold. An issue with one of them is being analyzed.)

Another issue was reported with the performance of the thrust vector control (TVC) system during test case five, where the Main Propulsion System (MPS) hydraulics were thoroughly exercised. The hydraulics are used to control RS-25 engine valves in addition to the Core Stage TVC actuators that move the engines.

The TVC questions came up after digging deeper into the data from test case five. During the early part of the test, the hydraulic systems were operated using external ground power and later using the vehicle’s Core Auxiliary Power Units (CAPU).

Early in test case five, the TVC actuators were used to move each engine individually and then all four engines were gimbaled simultaneously.  The SLS Program is continuing to review test data and discuss options for how to proceed with the big Wet Dress Rehearsal (WDR) and Hot-Fire tests after the post-hurricane cleanup is completed.

Rework and retesting to resolve the issues will reportedly push the Hot-Fire test out of November and possibly farther. The target date for the precursor WDR tanking test prior to the Hot-Fire is also under review.

Troubleshooting work that was going on prior to Hurricane Zeta and the subsequent post-hurricane cleanup are expected to delay the Wet Dress Rehearsal beyond its previous early November target.