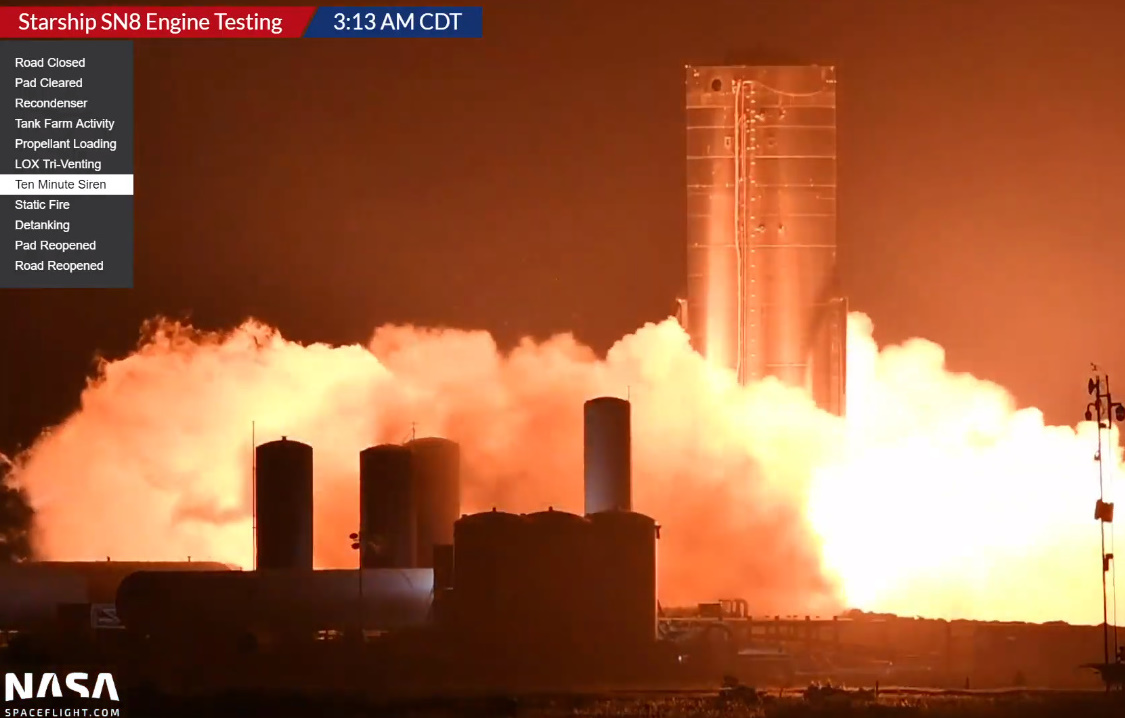 Starship SN8 has moved SpaceX through another major milestone with the first ever triple Raptor Static Fire test. Following two preburner tests over the last two nights, SpaceX recycled SN8 and fired up the engines to set the stage for nosecone’s installation – with a header tank – for a repeat test in around a week.

Opening with a Sunday night test, which followed an aborted attempt earlier in the week, a number of test windows were set for this week

Although SpaceX has conducted numerous Static Fire tests with its Starship prototypes, this was the first time three Raptors will have been fired together. This includes at SpaceX’s test center in McGregor, Texas – where Raptors are test fired individually.

The test path has been refined over the evolution of Starship, with two objectives within a few hours of each other set to take place.

Once the vehicle has been prop-loaded, controllers can conduct a preburner test – as was the case during the Sunday/Monday overnight window and during the first part of Tuesday testing.

A preburner is essentially a small engine that powers a turbopump. Each Raptor engine has two, one for the liquid oxygen oxidizer and one for the methane fuel.

Providing the data from this objective is deemed acceptable; recycling of the vehicle will prepare for the Static Fire test that will utilize Raptors SN30, 32, and 39.

Although SpaceX does not provide any running commentary or official info into Starship testing, the go to proceed towards the firing of the Raptors is known via Mary (@bocachicagal) hearing a police siren.

Mary, and the other local residents of Boca Chica Village, are provided a heads up of testing, including the notification of a police siren with 10 minutes to the Static Fire.

Not least because this is a unique test for Starship, all three engines’ actual firing still requires a major data check into the system’s health. SpaceX could recycle the test in the days to come.

If the data is good, SN8 will next expect to receive the nosecone that has finally been identified and has since been stacked with its five-ring section.

SpaceX Boca Chica has its own “Noseconeland” at the Production Facility, with numerous nosecones have been seen inside and outside the buildings, including a mated pathfinder nosecone in the Windbreak Facility.

This past week has seen the structural test article removed from the Windbreak, while a few other nosecones were dismantled.

This set the stage for SN8’s nosecone to confirm its destination as it was rolled out of the Big Tent facility and moved into the Windbreak to install its aero surfaces.

On Sunday, the five-ring section – which the nosecone will sit on – was moved into position near the Windbreak as a prelude to a full nosecone mating.

Starship SN8 nosecone has made an appearance out of the windbreak and the 5 ring high stack moved into position ahead of stacking operations. 🤩🚀@NASASpaceflight https://t.co/9sTD7p0vVz pic.twitter.com/YH2mcP4WMx

Dependant on SpaceX being happy with the first Static Fire test, the nosecone will be transported to the Launch Site and prepared for mating with SN8.

Once mating operations have been completed, preparations for a second Static Fire test are expected, this time teams will be testing the three Raptors’ firing while pulling Liquid Oxygen from the header tank housed inside the nosecone.

Another data review will then take place, this time to approve the Starship SN8 vehicle for the ambitious 50,000 feet test launch and landing attempt.

SN8’s test holds a high degree of risk for the vehicle. As such, SpaceX is taking appropriate mitigations to avoid impacts on the overall Starship test path.

That mitigation comes in the form of additional Starships ready to enter the fray within days of being required.

Starship SN9 is now fully stacked inside the Mid Bay and has a new neighbor, with SN10 now undergoing the business end of its stacking operations.

This work is ongoing while additional Starship sections are being staged, with parts up to at least SN14 spotted over recent days.

Simultaneously, an array of sections for a Super Heavy booster are waiting for the clearance to enter the High Bay for the stacking. They will form the first prototype vehicle, which is expected to conduct a 150-meter test hop on two Raptors.

Work on the High Bay is complete from a structural standpoint, with workers now concentrating on preparing the building for the installation of the gantry crane that will undertake the work of stacking the sections on the tall booster.