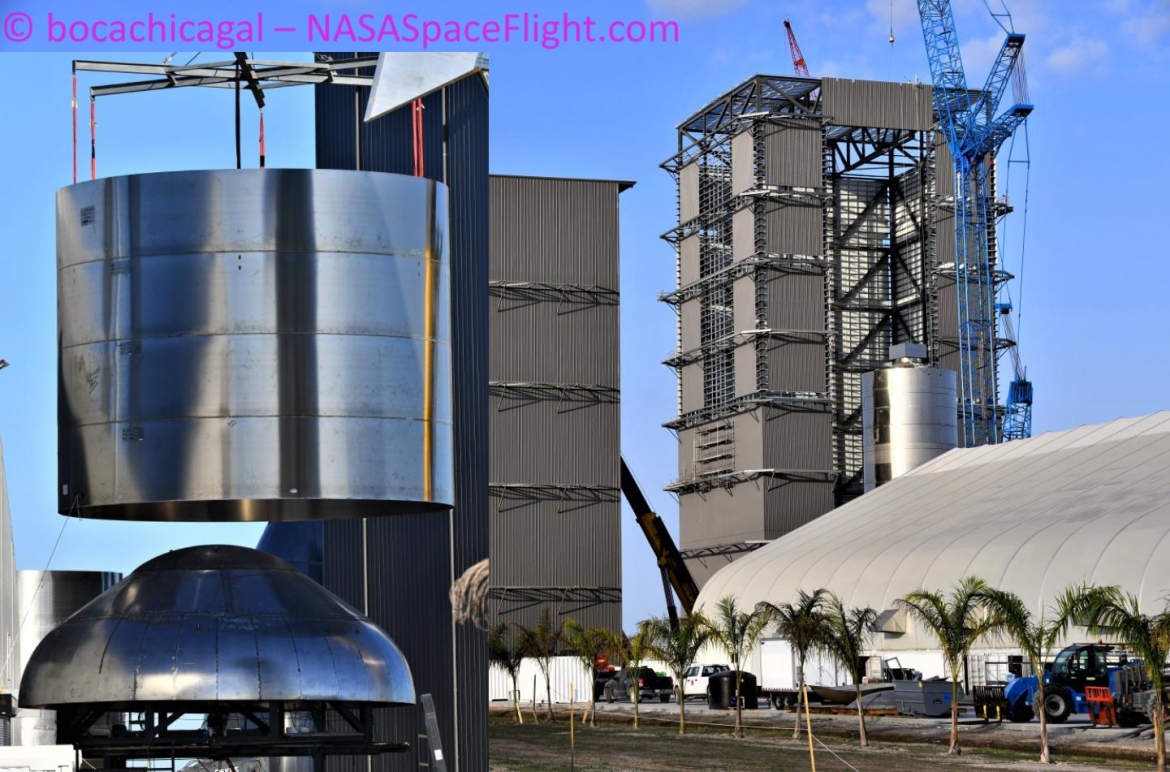 All eyes remain on Starship SN8’s next-level test campaign, advancing the test program from 150-meter hops to high-altitude flights. Amid SN8’s preparations at the launch site  – and numerous Starships, at various points of construction, at the Production Site – several Super Heavy sections were observed during the week in advance of stacking operations for the first prototype booster.

Following SN8’s rollout to the launch site, the expected test flow has moved slightly to the right due to the delay in lifting the vehicle on to the launch mount due to high winds impacting crane operations.

Once the conditions improved, the lift was completed, allowing for several days of hooking the prototype into the Ground Support Equipment (GSE) lines to provide power and propellant loading during the test campaign.

It is expected SN8 will first undergo proof testing with LN2 at both ambient and cryogenic temperatures, ensuring the vehicle has no leaks or weak points in its structure. This follows the same test milestones as all previous Starship prototypes.

However, the following flow milestones for SN8 will vary from those employed on its predecessors, with nosecone mating set to follow closely after the proof testing.

With numerous nosecones at the Production Facility, it is unclear which nosecone will be mated with SN8.

Most Texas Tank Watchers have been keeping a close eye on the completed nosecone inside the windbreak facility. However, this fully assembled fairing is likely to be a test article.

A tell-tale sign on the family of nosecones in view is a weld line that denotes which nosecones contain a header tank, which SN8’s nosecone will include. 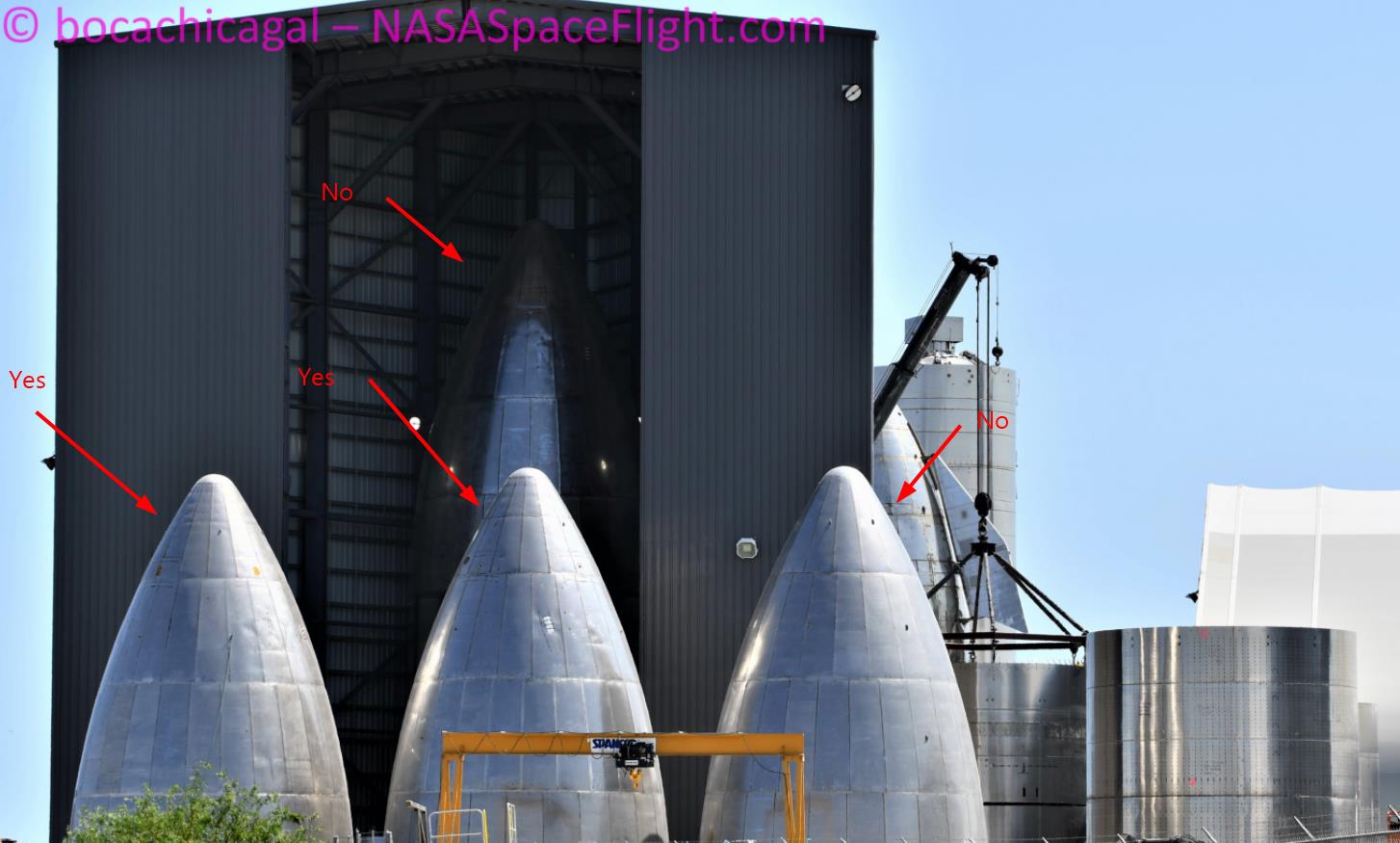 The nosecones around the Windbreak – via Mary (@bocachicagal) for NSF

There are also several nosecones “hidden” away inside the “Big Tents” – resulting in several potential nosecones that could earn the right to fly with SN8.

The next clue for the nosecone’s meet and greet with SN8’s timeline will likely come via an additional roadblock, allowing for the road trip to the launch site.

Following nosecone installation – and the addition of aero surfaces such as canards – preparations for the first of potentially two or more Static Fire tests will take place. This will be the first time three Raptors will be installed on a prototype Starship, and the first time three have ever fired at the same time.

It is not yet known which Raptors will be involved, be it either three brand new Raptors shipped from the McGregor test site or a combination with a hop-proven Raptor, such as Raptor SN29 that flew with SN6. 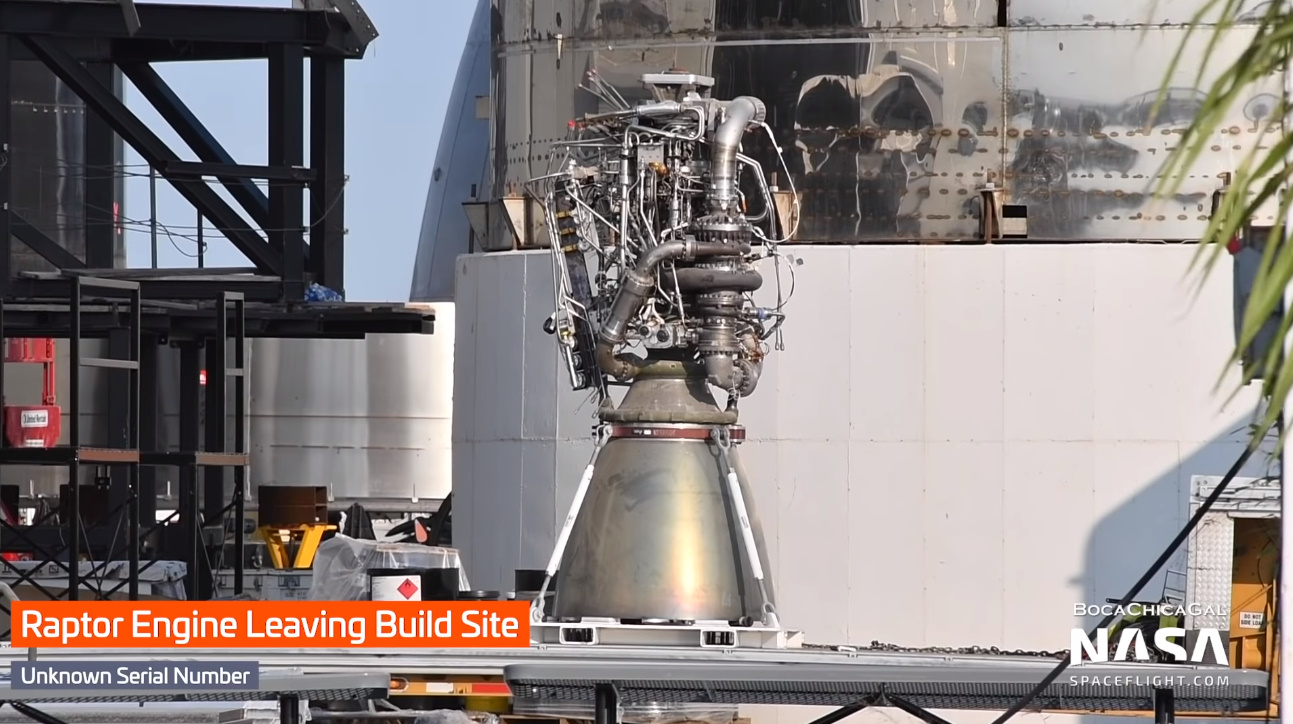 One Raptor – possibly SN29 – was seen being loaded on to a truck for departure back to McGregor during the week, although its identification is unknown.

Should the Static Fire tests and data reviews into the performance of the engines prove nominal, the next milestone will be the big event of the test launch to 50,000 feet, prior to the ambitious return and landing attempt.

With this being the first-of-its-kind test for Starship, there is the potential the test will end in a “crater,” as Elon Musk mused on Twitter. However, SpaceX has staged additional Starships to be ready to step up to the plate to continue the test objectives.

Starship SN9 is now fully stacked inside the Mid Bay following the mating of its engine section with the rest of the tankage late in the week. This also cleared space for SN10 to enter stacking operations in the vacated bay.

As of Friday, SN10’s leg skirt was spotted, and its thrust section was moved outside Tent 1 and readied for lifting. SN11 sections have also been spotted by the ever-vigilant Mary (@bocachicagal), with the promise of additional Starships in the early stages of production based on the numerous deliveries of Thrust Pucks, Downcomers, and Landing Legs.

Preparations for Super Heavy have been ongoing for some time now, both at the Production Facility with the huge High Bay building, through to the Launch Site, where the new Super Heavy mount continues construction with the filling of concrete into its sleeved pillars.

However, confirmed sightings of sections that will make up the prototype booster were lacking – that was until this past week.

Mary (@bocachicgal) spotted the Super Heavy Forward Barrel Section and Forward Dome, and then the Super Heavy Fuel Stack Assembly Section(s). The former was then sleeved as confirmation the assembly phase had begun.

Following the path of Starship prototypes, assembly of the sections takes place outside of the “Big Tent” facilities, before heading for stacking.

In total, the labeled sections for the Super Heavy Prototype – which is set to receive two Raptor engines and hop 150 meters from the new orbital launch mount – include: “FWD BARREL ASSY BOOSTER”, “FUEL STACK ASSY BOOSTER”, and “LOX STACK – 1 BOOSTER”.

The labels allow for speculated section placement in the Super Heavy jigsaw.

There were 2 new sections spotted by Mary, the "fuel stack" (yellow) and the "lox stack 1" (purple). This diagram is showing their speculated placements along with the other sections that have been spotted.

While the “Bluezilla” crane completes that High Bay work, another new crane was spotted at Boca Chica, which may be involved in the stacking of Super Heavy sections.

The Liebherr LR1600/2 Crane is in the early process of receiving its appendages, but photos of the fully assembled crane during other lifting roles worldwide show it would be capable of catering to Super Heavy’s needs, be it for stacking or mating operations.

Where it will roll to once assembled will provide the main clue as to its future purpose.