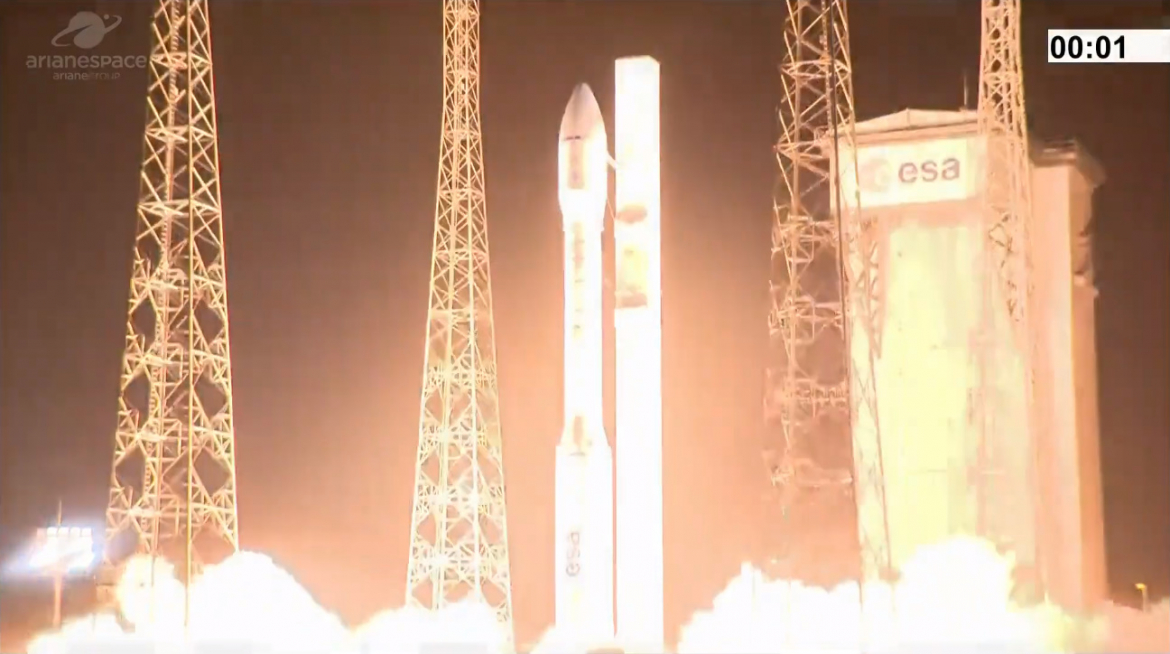 Arianespace suffered another issue with its Vega rocket during the launch of two Earth observation satellites named SEOSAT-Ingenio and TARANIS for Spain and France, respectively.

Liftoff from the Guiana Space Center near Kourou, French Guiana, was on time at 01:52:20 UTC on Tuesday, 17 November — which is 20:52:20 EST on Monday, 16 November). Vega was aiming place the two satellites into sun-synchronous orbits at slightly different orbital inclinations and altitudes.

However, an issue with the upper stage – an underperformance – saw the trajectory deviate and ultimately resulted in the loss of mission.

Arianespace confirms Vega has failed for the second time in three missions. pic.twitter.com/4xCEq10p73

The launch campaign officially began on 24 September 2020 with the arrival of both SEOSAT-Ingenio and TARANIS.  TARANIS was fueled on 13 October while SEOSAT-Ingenio underwent similar operations on 15 and 16 October.

TARANIS was integrated to the payload adapter on 28 October before being enclosed inside the lower section of the Vega Secondary Payload Adaptor (VESPA).  SEOSAT-Ingenio then took its place atop the VESPA upper section on 30 October.

The two VESPA sections were mated together on 4 November, and the entire payload stack was then encapsulated on 6 November.

Meanwhile, build-up on the Vega rocket commenced on 5 October when the solid propellant P80 first stage was transported to the launch pad. 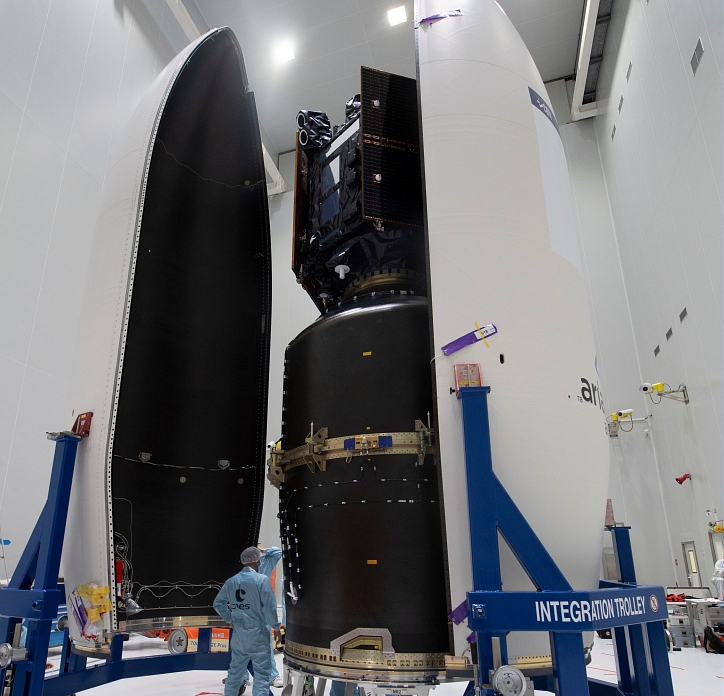 SEOSAT-Ingenio (top) and TARANIS (inside the lower VESPA segment) are encapsulated inside the Vega payload fairing. (Credit: Arianespace)

Between 7-10 November, the AVUM (Attitude Vernier Upper Module) upper stage was fueled with its highly-toxic unsymmetrical dimethylhydrazine and nitrogen tetroxide.

The two satellites, in their payload fairing, were stacked atop the rocket on 12 November, after which technicians carried out functional checks of the rocket and performed a dress rehearsal for launch — which included arming the ordnance on Vega’s stages and payload fairing.

A Launch Readiness Review on Sunday, 15 November cleared the mission for launch.

Vega’s countdown is mainly dedicated to bringing up all the vehicle’s systems, aligning its measurement units, withdrawing the mobile access gantry, and loading the mission’s flight program and verifying the onboard computer.

Given the solid and storable propellant nature of Vega’s four stages, the rocket does not need to be fueled for launch during count operations.

Vega’s three solid fueled and AVUM liquid fueled stages were to bring the mission’s payload into an initial parking orbit after a 15 minute climb to orbit.  It never got that far as issues with the flight path was noted just after the first AVUM burn.

A 37 minute coast would have followed before AVUM re-ignited its engine to raise the orbit’s apogee (point of closest approach to Earth’s surface).

SEOSAT-Ingenio was to then separate just over 54 minutes after liftoff, having been delivered into a 670 km sun-synchronous (Local Time on Descending Node at 10:00 hours) orbit inclined 98.09 degrees to the equator. 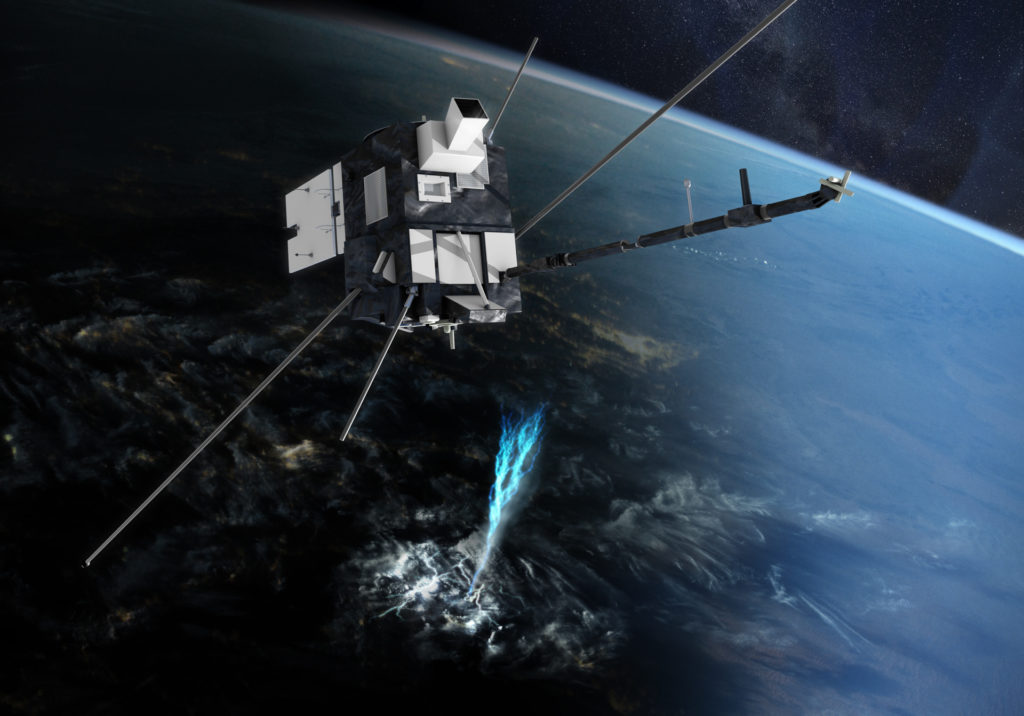 AVUM would have then performed two more burns to alter its orbital inclination and perigee/apogee.

TARANIS would have then been released into a 700 km sun-synchronous (Local Time on Ascending Node at 13:30 hours) orbit inclined 98.19 degrees to the equator 1 hour 42 minutes after launch.

Funded by CDTI, Spain’s Center for Development of Industrial Technology, the satellite was developed by the European Space Agency in collaboration with Spanish industry.

SEOSAT-Ingenio was a high-resolution optical imager that will provide 2.5 meter resolution in panchromatic and 10 meter resolution in the multispectral resolutions.  Most information gathered by the satellite would have been used for cartography, land/water use and management, and environmental monitoring.

Designed in part as a quick-reaction satellite to aid with natural disaster response, its optical instruments were capable of seeing “sideways” from its normal field of view to provide quick information in the wake of earthquakes, floods, tropical storms/cyclones, etc.

This is accomplished by rolling the satellite ±35 degrees around its axis to change the primary field of view and allows SEOSAT-Ingenio to view any land location on Earth in less than 3 days.

The Tool for the Analysis of RAdiation from lightNIng and Sprites (TARANIS) satellite, named for the Celtic god of thunder and lightning, was to have studied luminous, radiative, and electromagnetic phenomena occurring 20 to 100 km over thunderstorms.

These phenomena are known as Transient Luminous Events (TLEs) and appear as red sprites, blue jets, elves, and sprite halos.  Sometimes, they are accompanied by terrestrial gamma-ray flashes (TGFs).  The convergence of TLEs with TGFs is one of the primary questions scientists hope to answer by using the data obtained by TARANIS.

During the satellite’s planned four year mission, scientists anticipate hoped it would have observed thousands of TLEs and TGFs, recording their properties and characteristics in high resolution.

TARANIS was owned and operated by CNES (Centre national d’études spatiales – National Centre for Space Studies of the French government) and was developed and built in collaboration with entities in the United States, Denmark, Japan, Poland, and the Czech Republic.