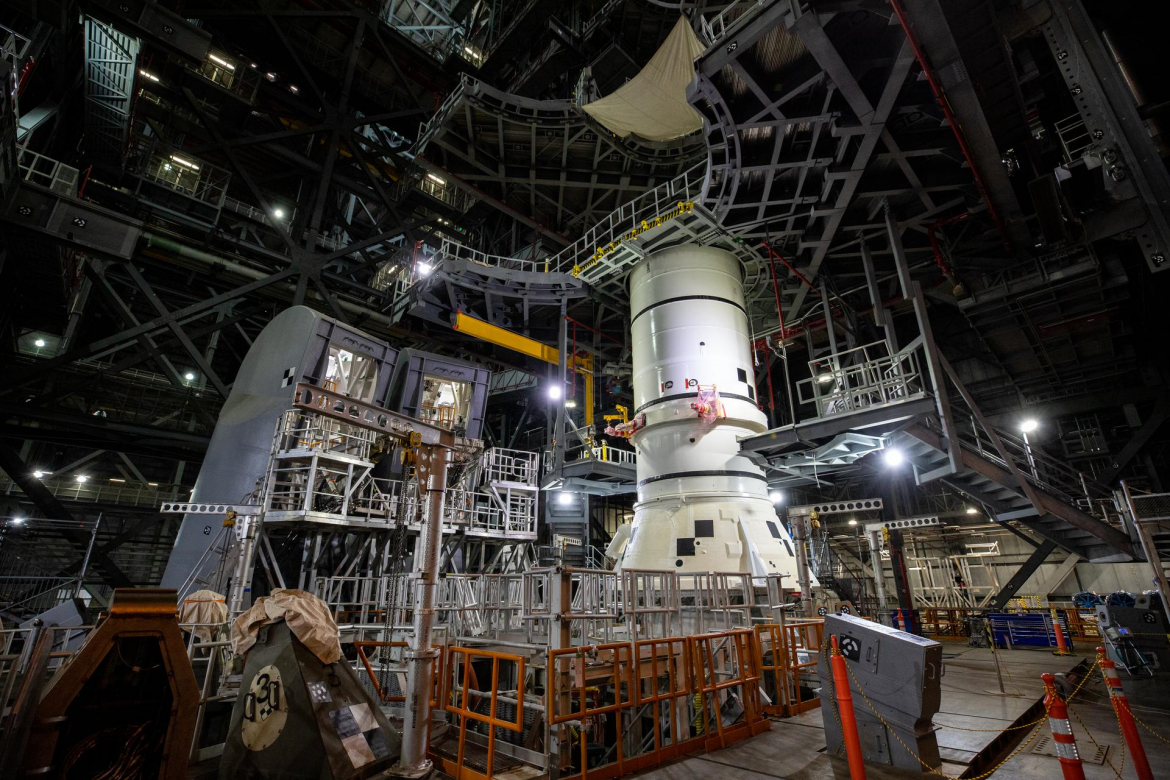 The left aft booster assembly was rolled from the Rotation Processing and Surge Facility (RPSF) into VAB High Bay 4 on November 19; after a lifting fixture and crane were attached, the assembly was lifted up a couple of days later towards the ceiling of the VAB and then across the transfer aisle from High Bay 4 to High Bay 3 where the first Orion/SLS vehicle will be put together on ML-1. The aft booster assembly was then lowered down, and the aft skirt was placed on one set of four vehicle support posts.

After the crane and fixture were disconnected, they were flown back to High Bay 4 to repeat the process on the right aft booster assembly. With the two aft booster assemblies stacked on ML-1, the next major step in stacking will be to bring in the aft center segments for the first segment-to-segment mate.

Transfer of the SRB aft assemblies from their pre-launch processing facility at KSC to the VAB marks the long-awaited beginning of Artemis 1 vehicle integration. Artemis 1 is the first launch of NASA’s SLS vehicle, which it owns and operates; it also will be the first time that the space agency’s lunar Orion spacecraft rides with SLS. Launch is tentatively targeted for November 2021 to send Orion into lunar orbit. 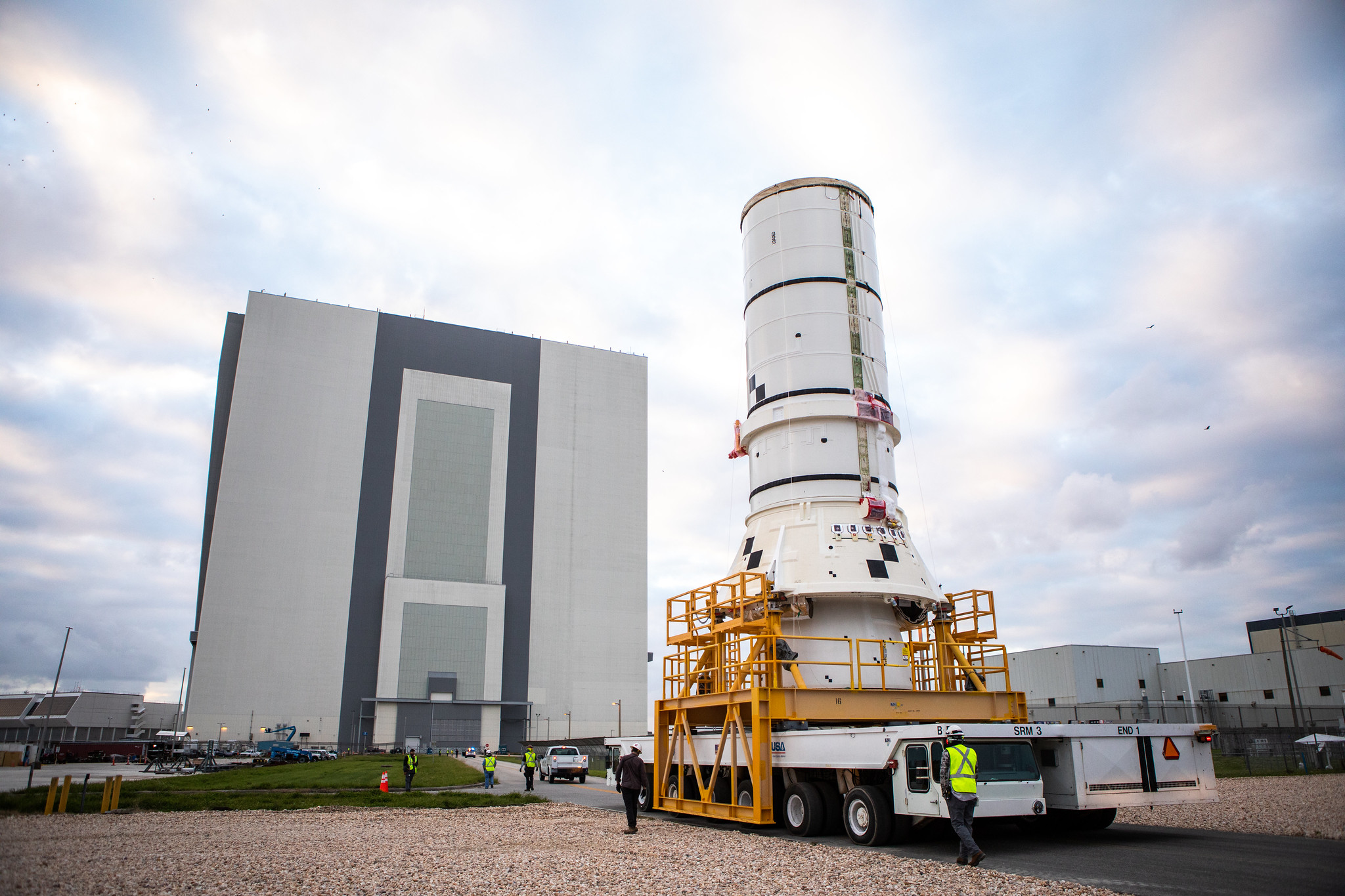 (Photo Caption: The left aft booster assembly is transported from the RPSF to the VAB on November 19. The assembly was the first element of the Artemis 1 flight vehicle to be set on the Mobile Launcher, beginning integrated operations for launch.)

The ten SRB motor segments for Artemis 1 were transported from prime contractor Northrop Grumman’s Promontory production facility in Utah to KSC in June. Most of the preparations for stacking at KSC focused on building the aft assemblies in RPSF.

During the Summer in the Rotation building of the RPSF, each of the two aft motor segments from Utah were mated to an aft skirt processed by Northrop Grumman at the Booster Fabrication Facility on KSC grounds and an aft exit cone or nozzle extension previously delivered from Utah. The aft skirts were loaded into build up stands in the Rotation building, followed by lifting and mating the aft segments to the aft skirts.

Build-up of the aft assemblies was completed with installation of parts such as the exit cone, Core Stage attach ring hardware, additional thermal protection system (TPS) elements, electrical harnesses, and instrumentation for flight and ground testing.

With the go-ahead to start building the boosters on the Mobile Launcher, the left aft booster assembly was lifted out of the build up stand in the Rotation building of the RPSF and placed on a transportation pallet. On November 19, a transporter carried the flight hardware on the pallet over to High Bay 4 of the VAB, where the assembly could be prepared for a crane lift onto the ML.

EGS and Jacobs have practiced these procedures for a couple of years and recently got to do a final rehearsal with two inert segments in September. To lift the segments, a four-point “384” lifting beam was picked up by one of the VAB’s 325-ton capacity cranes and then attached to the top of the booster hardware.

On November 21, the crane lifted the first aft assembly up to the top of the high bay to an opening that allows hardware to be lifted into and out of each bay. The crane then moved the booster hardware across the transfer aisle in between the high bays and through the opening or “diaphragm” for High Bay 3, which is the VAB integration cell for SLS where Mobile Launcher-1 is set up. 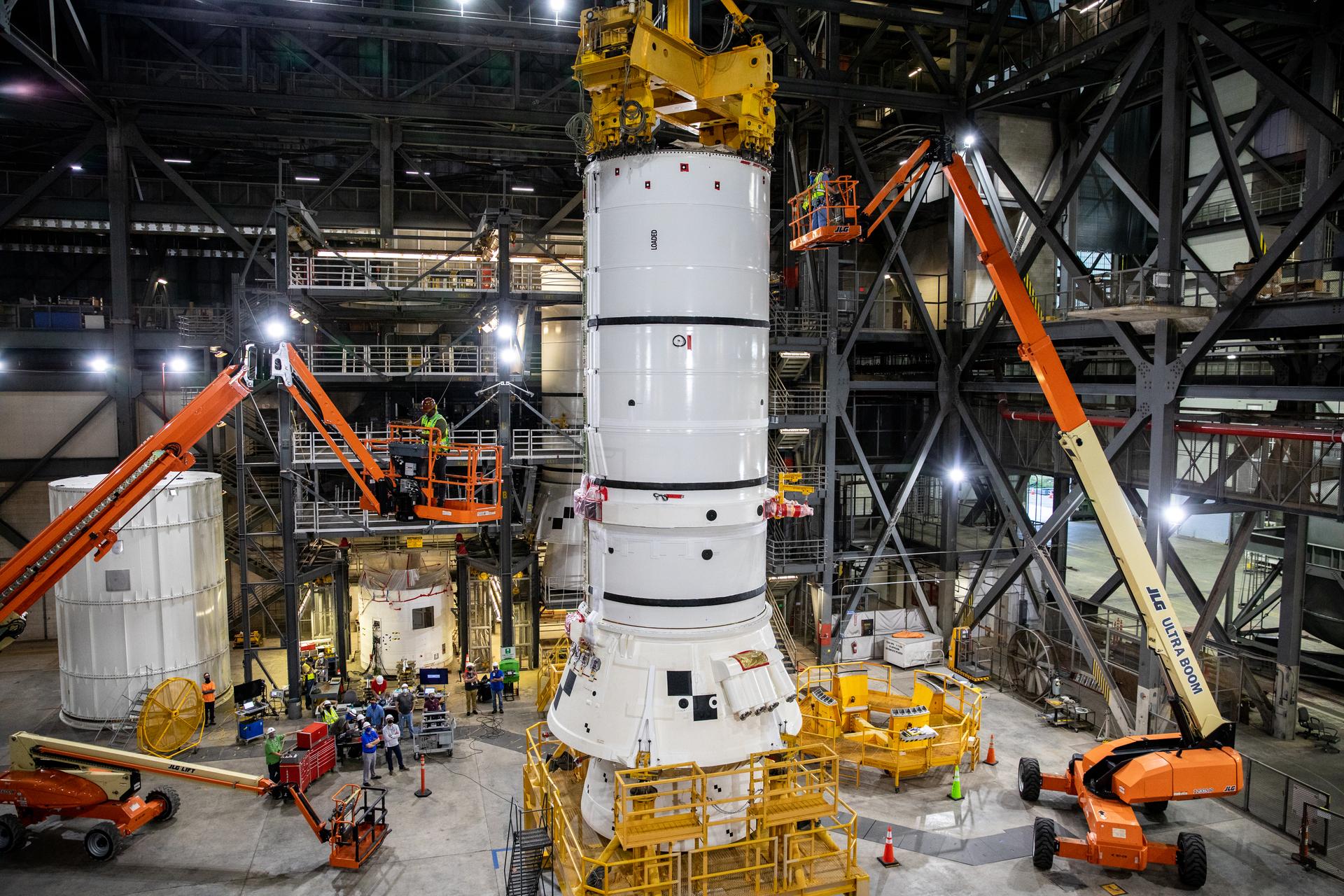 (Photo Caption: The left aft booster assembly in VAB High Bay 4 on November 20. The bottom booster segment is configured to be lifted up and then across the aisle to High Bay 3 for stacking on the Mobile Launcher. EGS and TOSC personnel in JLG boom lifts double-checked the connection of the 384 lifting beam to the clevis on the top of the aft assembly.)

The crane then lowered the left aft assembly down and aligned the four attach points on the aft skirt with the four Vehicle Support Posts (VSP) on the Mobile Launcher for each SRB. Next, the aft assembly was secured to the VSPs, its weight was transferred to the ML, and then the crane was derigged and disconnected.

The crane operators then flew the 384 beam back up and over to High Bay 4 to repeat the process with the right aft booster assembly.

The rest of the Artemis 1 SRB motor segments are all staged in one of the Surge buildings of the RPSF. Each of the eight segments was inspected after being removed from the rail car it was shipped from Utah on, placed on a transportation pallet, and moved into the Surge building for storage.

The space agency recently decided to add its 1970s logotype, popularly known as the “worm,” to its human spaceflight launch vehicles, and the logo is being painted on the center-center segments. The worm was exiled in the early 1990s, with almost all terrestrial traces of it erased from spaceflight hardware and the agency’s style guide; after thirty years of blacklisting, the logo returned to flight on the SpaceX Falcon 9 launch vehicle for the company’s Commercial Crew Demo-2 mission. 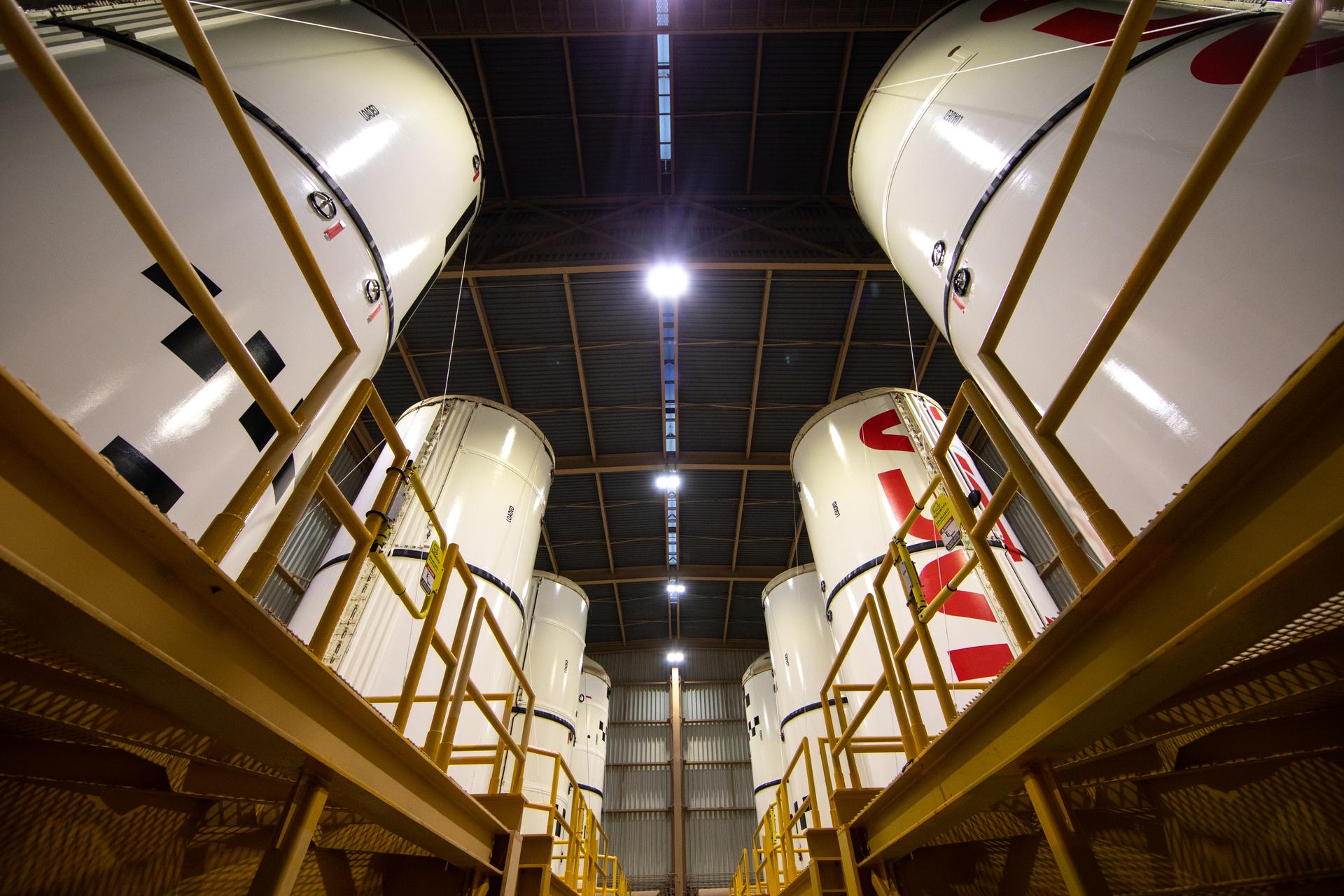 (Photo Caption: The other eight loaded SRB motor segments for Artemis 1 are shown in storage in one of the Surge buildings of the RPSF on November 17. The two forward segments are in the background, distinguished by their domes on top. In the foreground on the right are the two center-center segments that have most of their large NASA “worm” logo already painted; the remainder will be filled in over the covering for the booster’s systems tunnel.)

For SLS, the worm logo is painted on the sides of the booster segments facing away from the Core Stage. This is where the SRB systems tunnel is, so most of the logo painting was completed in the RPSF, but the remainder will be finished when the system tunnel covers are installed, and closeouts are completed.

Once the boosters are fully assembled, the next step in vehicle integration will be to stack the Core Stage with them. The launch vehicle’s central component will be the last piece of Artemis 1 hardware to arrive in Florida when it is barged to KSC, but the date of its arrival at the launch site remains uncertain.

When the motor segments arrived in Florida in June, EGS was anticipating the start of stacking operations on the Mobile Launcher to begin two weeks to a month after the Hot-Fire test of Core Stage-1 at the Stennis Space Center in Southern Mississippi. The Core Stage schedule is the critical path for Artemis 1 launch readiness; Core Stage-1 must complete the Green Run design verification campaign at Stennis before it can be delivered to KSC for vehicle integration.

The Core Stage Green Run test campaign was delayed by natural causes through most of the year, first by the COVID-19 pandemic and then by several tropical weather systems in the Summer and Autumn. Technical issues then pushed back the final two tests from November to December.

The EGS and SLS Programs didn’t want to stack the boosters for this first SLS launch too early because the Shuttle-derived boosters have an approximately twelve-month life limit once the segments are stacked together. Once the boosters are built upon the Mobile Launcher, NASA has about a year to launch Artemis 1 before motor segments would need disassembly, inspection, and possible maintenance. 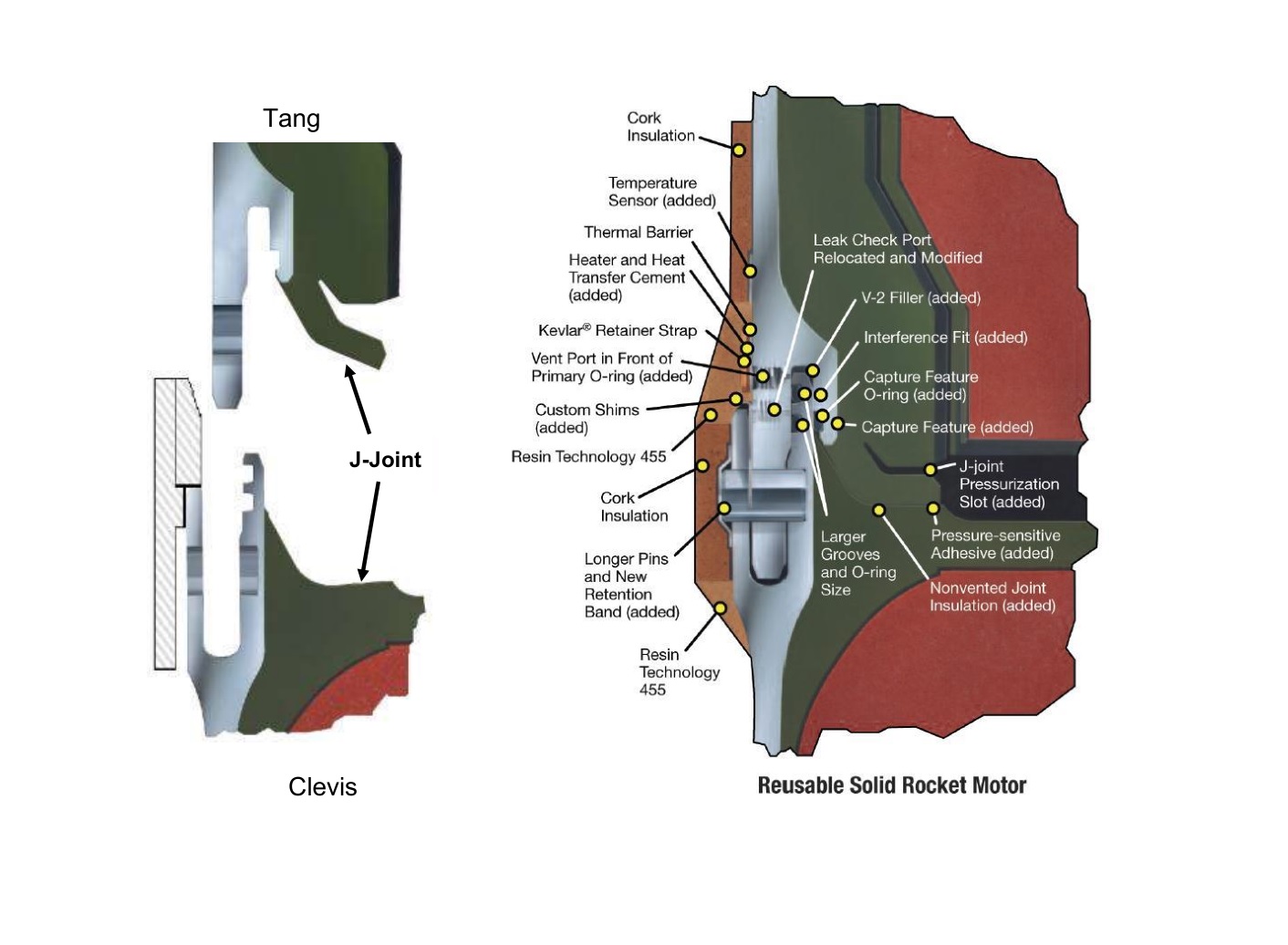 (Photo Caption: A composite graphic of the Space Shuttle solid rocket motor case-to-case field joint. SLS inherits the design in using leftover Shuttle SRM cases. Once the tang and clevis for two segments are mated, the J-Joint noted in the left figure has a 12-month stack life. The first segment-to-segment mate doesn’t occur until the next segment, the third overall is brought into the VAB for stacking.)

Although the aft assemblies are now installed on the Mobile Launcher, that doesn’t necessarily start the year-long timer. The primary driver of the time limit is part of the connections between the motor segments, which would be the next pieces to be stacked.

The ten motor segments at the heart of the SLS Boosters are built from Space Shuttle SRB case hardware; the reusable cases will make one last flight on the expendable SLS vehicle, and they also retain the Shuttle’s factory and field joint design. The J-leg case-to-case field joint feature is one of several design improvements made to the Shuttle boosters after the original field joint design failed in the STS-51L disaster in January 1986.