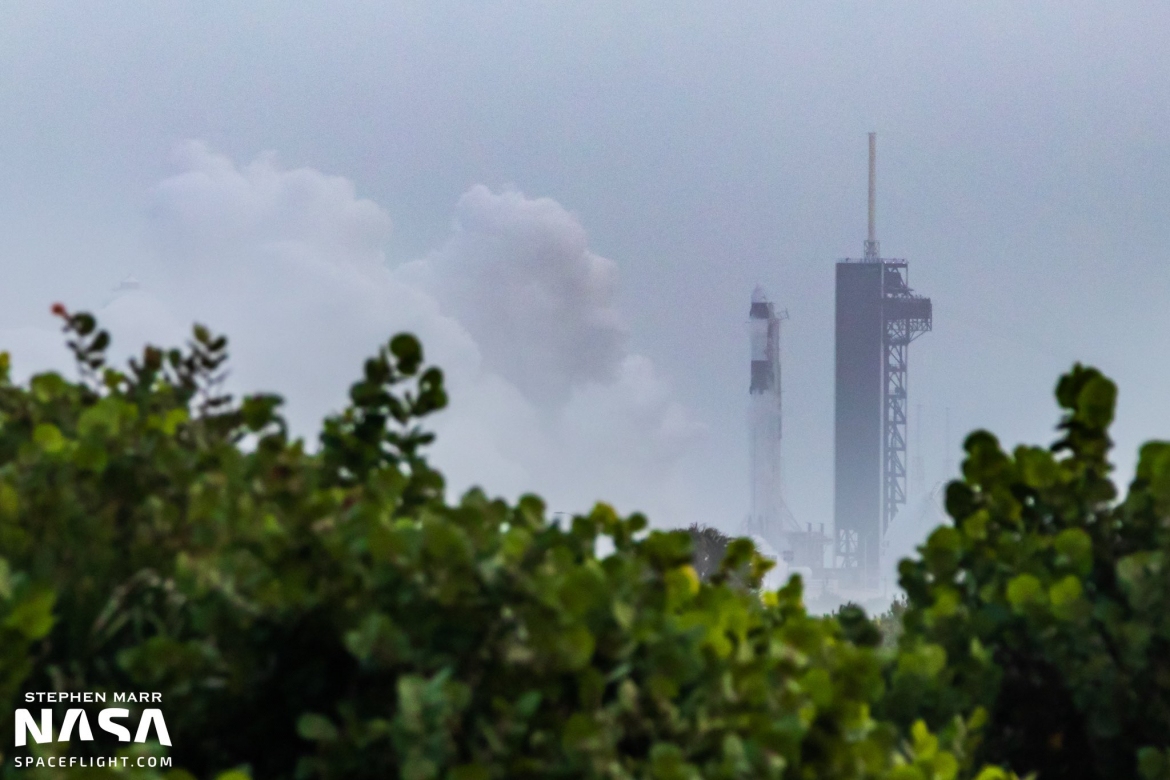 SpaceX has conducted a Static Fire test on the Falcon 9 rocket tasked with the first operational Crew Dragon mission, Crew-1.  The flight will be SpaceX’s second crewed flight and their first rotation mission with four astronauts onboard.

The test firing occurred at around 3:49pm Eastern at KSC 39A in Florida.

The static fire is one of the last critical tests ahead of launch and consists of a near-complete (the crew will not be aboard for the test) rehearsal of the mission countdown to ensure all vehicle systems are working properly.

Each stage has already been test-fired at SpaceX’s McGregor, Texas facility earlier this year before shipping to the Kennedy Space Center where they underwent final preparations and integration with each other and Crew Dragon before the entire stack was placed on the Transporter-Erector (TE).

On Monday evening, the Falcon 9 stack rolled out of the Horizontal Integration Facility (HIF) onto the launch pad, after which it was raised vertical on Tuesday morning.

Later that day, teams discovered a slightly anomalous reading on a purge valve on the second stage, leading to a decision to replace the valve even though the issue could have been accepted as-is.

The change-out necessitated bringing the Falcon 9 back down horizontal and delaying the static fire test from Tuesday evening into Wednesday afternoon.

The team at SpaceX’s rocket development facility in McGregor, Texas completed a static fire test today of the Falcon 9 first stage that will launch Crew Dragon’s first operational mission (Crew-1) with 3 @NASA astronauts and 1 @jaxa_en astronaut on board later this year pic.twitter.com/iagTmZUXDu

For the test, mission control — operating from Firing Room 4 in the Launch Control Center next to the VAB at the Kennedy Space Center — ran through the complete launch countdown, including propellant loading of both stages.

At T-35 minutes, RP-1 — a specially-refined form of kerosene — began flowing into the first and second stages.  Liquid oxygen loading on the first stage began at the same time.  The second stage started to receive liquid oxygen at T-16 minutes.

The propellants are loaded as late as possible to limit the amount of heating and boiloff that occur.  The colder and more dense they are, the more performance Falcon 9 can achieve.

The test culminated in a brief firing of the nine Merlin 1D first stage engines.  This burn is usually either 3.5 or 7 seconds long.  Given that the rocket for Crew Dragon Demo-2 performed a 7-second firing, it is likely that Crew-1’s will performed the same.

Following the short burn, the propellants are drained and the vehicle placed into a safe configuration for workers to return and prepare Dragon for Thursday’s launch day dry dress rehearsal with the crew.

Nonetheless, this specific static fire test holds a bit more importance than usual — other than being for a crewed mission.

During engine ignition on the first GPS III SV04 launch attempt, problems with two Merlin 1D gas generators were observed by the flight computers.  Both engines experienced an early buildup of pressure, and the launch safely aborted at T-2 seconds.

Gas generators are essentially smaller engines that power the propellant pumps on the main engines. Each Merlin 1D engine has one gas generator to power its pumps.

An in-depth investigation into the anomaly revealed a minor issue with the gas generator.

The engines that experienced issues on the GPS III SV04 mission were removed from that first stage and shipped to SpaceX’s test facility in McGregor, Texas.  There, they were fitted onto a test stand, where the problem occurred again.  A CT scan of the gas generator showed a clogged vent, only 1.5mm wide.

Upon disassembly of the engine, a red lacquer was discovered blocking the hole.  This was a leftover masking material from the build process, when part of the gas generator was anodized.  SpaceX Vice President of Mission Assurance Hans Koenigsmann described the lacquer as being similar to a nail polish.

Rather than just being a one-off issue, it was determined to be a possible problem with an entire batch of engines.

All Merlin 1D engines on recently-built boosters were inspected, including the first stage for Crew-1.  Two engines with a similar issue were found on this core.  These engines have since been replaced or repaired.

Before they gave the final go-ahead for the launch of Crew-1, NASA and SpaceX wanted to see similar engines fly.  The GPS III SV04 and Sentinel 6A boosters featured engines with a potential fix implemented.

GPS III SV04 successfully lifted off on 5 November 2020, and this week’s two-day Flight Readiness Review examined and unanimously cleared all 9 Merlin 1Ds on the Crew-1 booster. 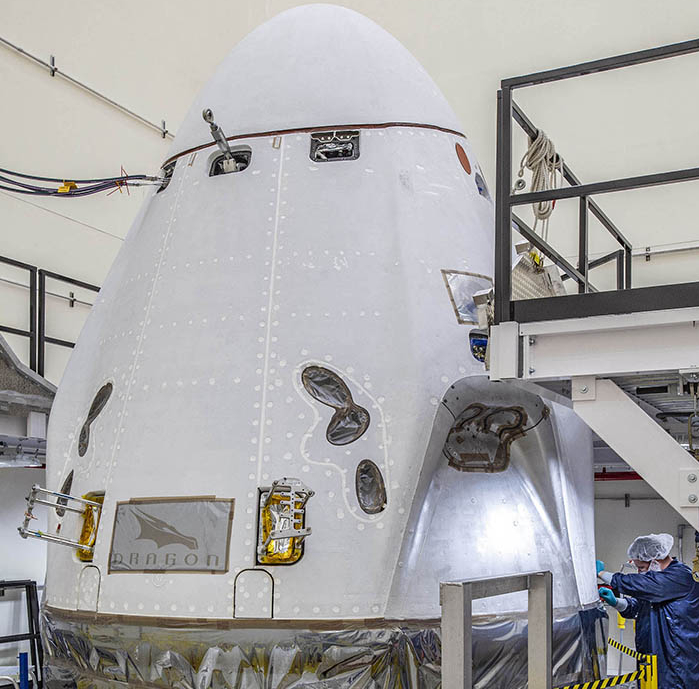 No one has flown to space on four different vehicles at this point.

In addition, NASA astronaut Kjell Lindgren will be the sole backup crew member for Crew-1.  Lindgren was also the only member of the backup crew for Demo-2 and trained to take over either crew position on the flight.

Hopkins and Glover will take the positions of Commander and Pilot, respectively.  Walker and Noguchi will both have the roles of Mission Specialist.

As the spacecraft commander, Hopkins will be in charge of Resilience during all phases of flight.  Should an issue with the automated docking system occur, he would take over and perform a manual docking. 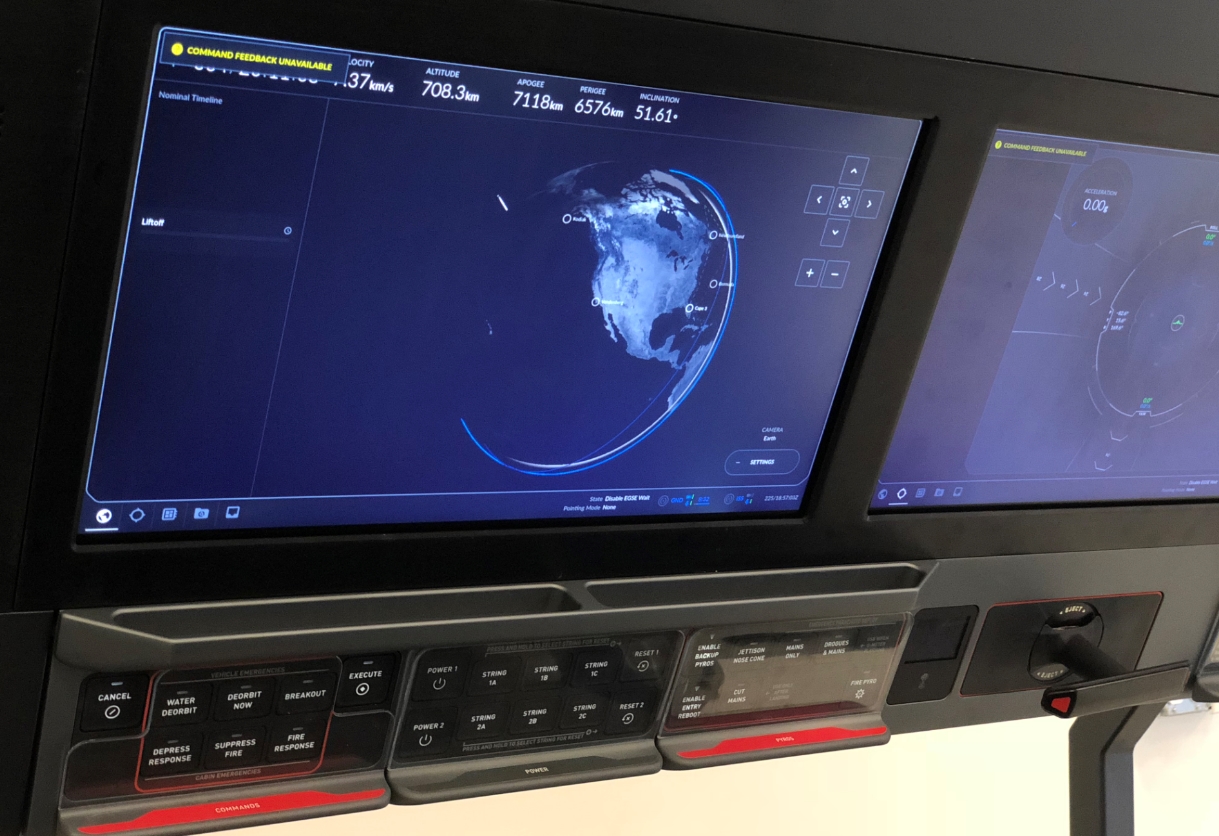 Tests of the manual controls were performed by Bob Behnken on the Demo-2 mission earlier this year.

Glover, the mission’s Pilot, will be the second-in-command and backup to Hopkins.  He will also be assessing Resilience‘s performance throughout the mission.  Should Hopkins have to take manual control at any point, Glover would assist in relaying information to him.

Once Crew-1 arrives at the Station, the United States Operating Segment (which includes the U.S., Canada, Japan, and the European Space Agency) segment will boast a crew of five.  Until now, the U.S. segment had usually only had a crew of 1-4.

The Crew-1 team will join NASA astronaut Kate Rubins and Roscosmos cosmonauts Sergey Ryzhikov and Sergey Kud-Sverchkov who arrived at the Station last month.  The addition of four more sets of hands will dramatically increase the scientific output of the orbital lab.

Crew-1 will be joined by Crew-2 towards the end of its stay in March 2021.  Crew Dragon Endeavour — on its second flight — will bring another group of four astronauts to the Station.  Crew-2 will also be flying on top of Falcon 9 first stage B1061 — making its second flight after Crew-1.

Crew-1 is set to return to Earth in April 2021 after 7-10 days of direct handover operations between the Crew-1 and Crew-2 astronauts.  Resilience will splash down in the Atlantic Ocean and be retrieved by one of SpaceX’s two recovery ships.  The capsule will then be taken back to Cape Canaveral and refurbished ahead of its next mission.