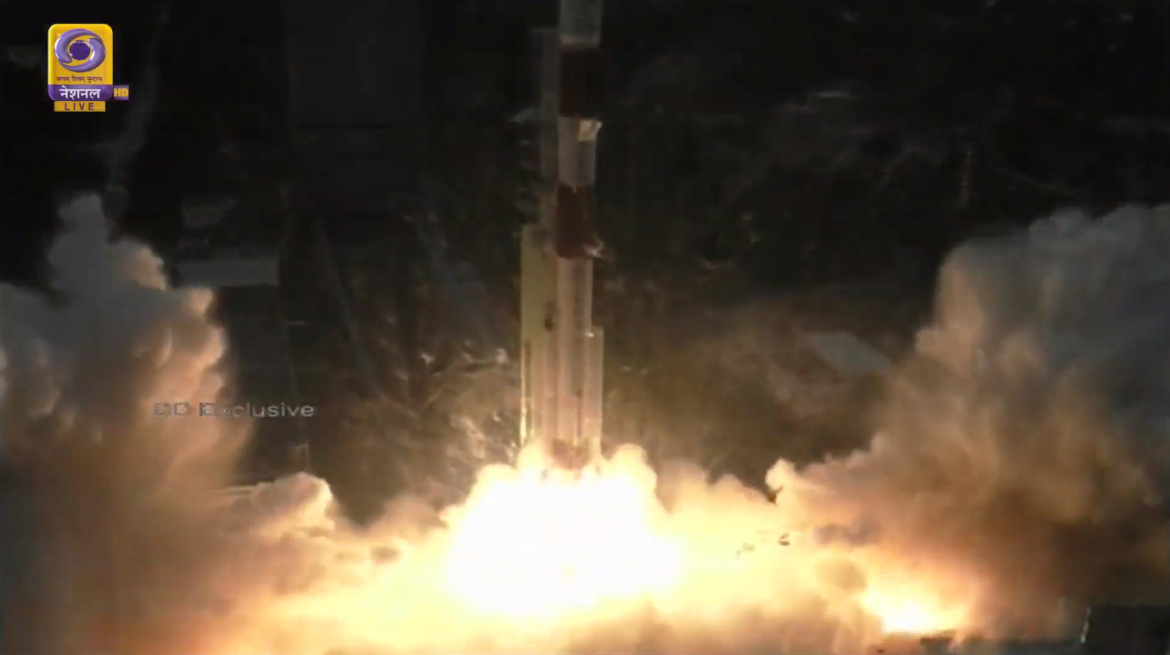 Liftoff occurred during a rainstorm at 09:37 UTC (04:37 EST) — which is 15:07 local — on 7 November.  The mission used the PSLV-DL variant of the rocket and launched from the First Launch Pad at the Satish Dhawan Space Centre on India’s central east coast.

The space centre is located on the island of Sriharikota in the state of Andhra Pradesh.  The Bay of Bengal is situated just to the east — overwhich the first launch of the PSLV rocket occurred on 20 September 1993.  Since then, and across five variants, the PSLV family has launched notable missions like Chandrayaan-1 and the Mars Orbiter Mission — the first Indian missions to visit the Moon and Mars, respectively.

The first stage solid rocket can then be augmented is needed in combinations of two, four, or six side-mounted solid rocket boosters.  The original S9 boosters that flew on the PSLV-G variant have since been replaced with upgraded S12 boosters that carry additional propellant and performance. 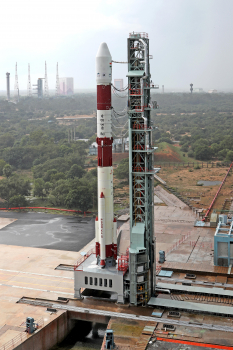 The PSLV-DL for this mission on the First Launch Pad at Satish Dhawan Space Centre. (Credit: ISRO)

During the second stage burn, fairing separation occured once the vehicle passed out of the aerodynamically sensitive period of flight through Earth’s lower atmosphere.

Following staging, and at the correct point in the flight to orbit, the fourth stage’s two L-2-5 engines ignited to perform the final burn into the desired orbit.

The engines burn monomethylhydrazine and mixed oxides of nitrogen for up to 425 seconds.

For this mission, the primary payload was the ISRO’s EOS-1 satellite, which was formerly known as RISAT-2BR2.  In October, ISRO changed their naming system for the satellite series.

EOS-1 will provide day and night, all weather Earth observations for agriculture, disaster assistance, forestry, geology, sea ice and coastal monitoring, and military surveillance via a Synthetic Aperture Radar (SAR) imaging system.  Using radio waves – transmitted from the satellite – instead of visible light from the Sun to illuminate the Earth, EOS-1 can collect images even when it is night in the location to be observed.  The X-band signals can also penetrate cloud cover to expose the surface below.

With a mass of roughly 628 kg and built for five years of on orbit operations, EOS-1 is part of the overall RISAT (Radar Imaging Satellite) constellation and the final one of the RISAT-2B variants that carries X-band SAR.

Within the RISAT program, there are two separate series of satellites.  RISAT-2 (and now 2B) spacecraft carry X-band payloads.  The original RISAT-2 satellite was launched in April 2009.  RISAT-2 was developed under a partnership between ISRO and Israel Aerospace Industries (IAI) and was based on the Israeli TecSAR radar-imaging satellite which ISRO launched as part of the agreement.  The imaging system aboard the RISAT-2B satellites is believed to be a development of the Israeli system used on RISAT-2.

Like RISAT-2B and -2BR1 beforeit, EOS-1 is expected to be launched into a roughly 576 km orbit inclined 37 degrees to the equator.

Joining EOS-1 on this flight were 9 rideshare payloads:

The mission was originally targeted to launch in December 2019 before being pushed into the first and second quarters of 2020.  As COVID-19 infections spread and India entered lockdown, work at the Satish Dhawan Space Centre stopped for worker protection.

Today’s flight, coming eleven months into the year, marked ISRO’s return to flight operations during the COVID-19 pandemic and the country’s and agency’s first launch of 2020.