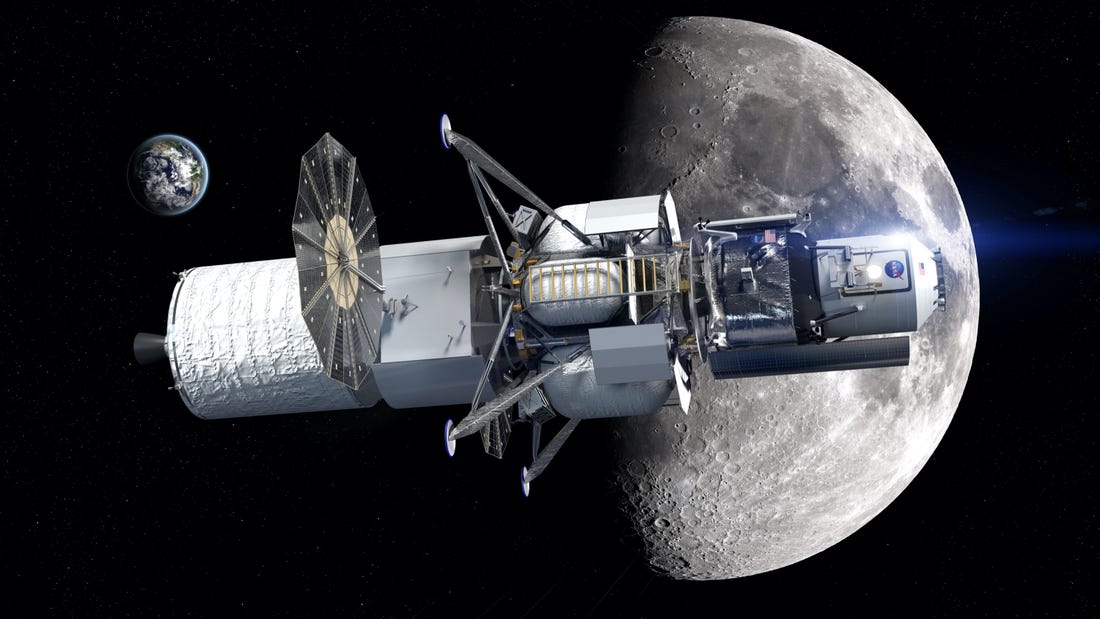 Together, the National Team is proposing an integrated lunar lander, with the following major elements provided by the companies:

For Northrop Grumman’s part, the Transfer Element will provide docking capability for the integration of the National Team’s lander in Near Rectilinear Halo Orbit (NRHO) as well as “a lot of the necessary services that are needed in flight but that are not needed on the Moon,” said Sally.

This includes power for the Ascent/Descent Elements, attitude control, active thermal control, and propulsion.  “It enables the two elements that do land on the surface to have those functions offloaded and eliminate the amount of mass they have to carry.”

Under the current plan, the Transfer Element would launch first on a currently available commercial vehicle and would then use its BE-7 cryogenic engine to transfer itself into NRHO.

Per that docking, “We’ve made great progress in the last couple of months,” said Sally.  “We have had a very successful docking demonstration that we did with our prototype zero, MEV-derived capture mechanism.”

An MEV, or Mission Extension Vehicle, is a Northrop Grumman spacecraft designed to autonomously dock with aging satellites in Geostationary Orbit and extend their operational lives by serving as an attitude control platform and auxiliary power source.

From this, the MEV capture mechanism for docking proved useful for the Transfer Element.

“So this was the first of a series of demonstrations that we will be performing.  And this was done really as proof of concept for the lunar docking system that we are developing,” noted Sally.  “And this system, we have also done a trade to select the same docking system to be the system that docks the Ascent Element with the Descent Element.  So we have a common docking solution that Northrop Grumman is providing based on our flight-proven, MEV-derived system.”

The initial docking demonstration on 10 October was carried out at Northrop Grumman’s Dulles, Virginia facility and allowed the team to simulate the Rendezvous, Proximity Operations, and Docking (RPOD) sequences the Transfer Element will have to perform. 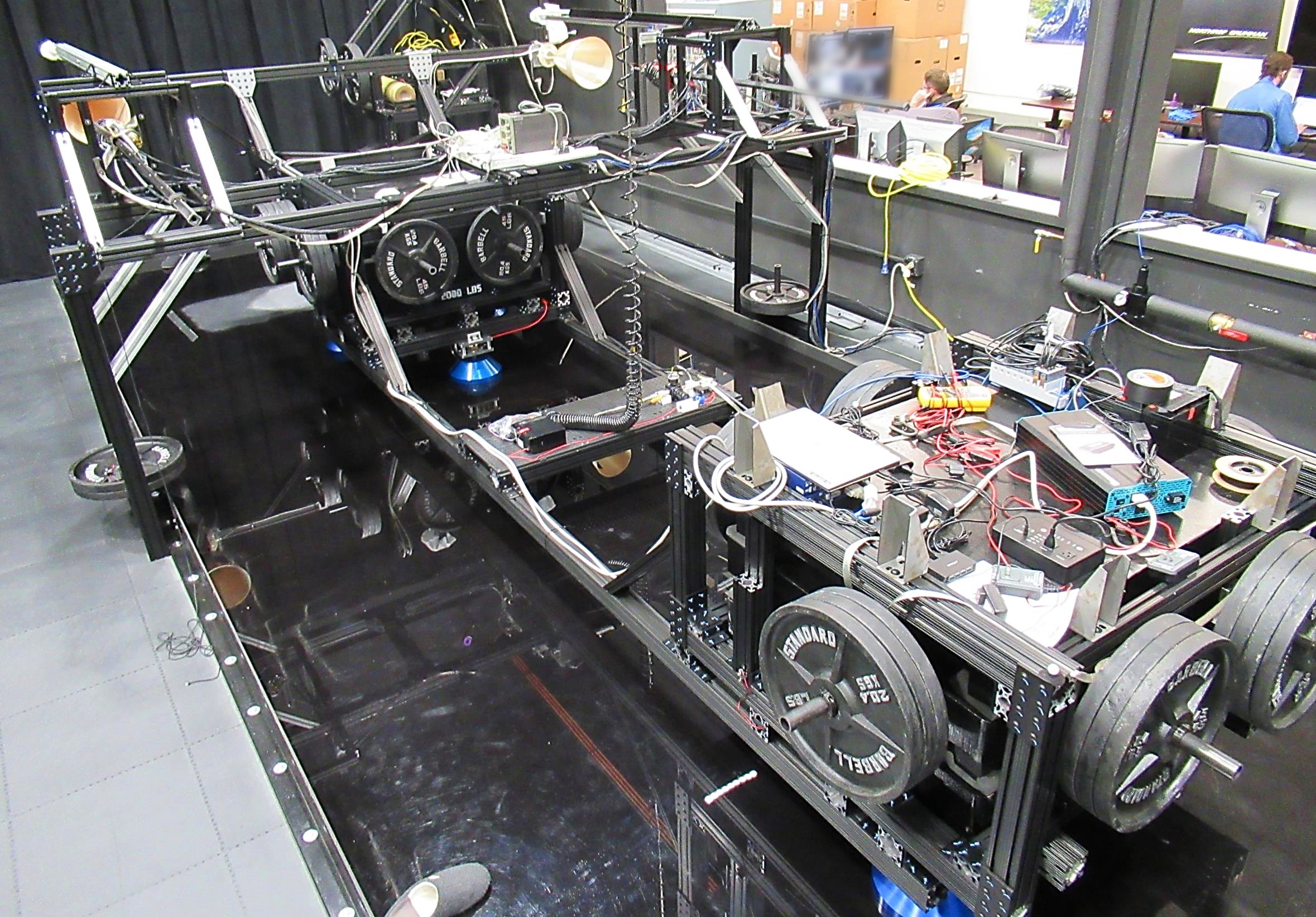 Northrop Grumman’s RPOD Lab completes a first proof of concept test for the Lunar Docking System mechanism which will be used for on-orbit mating of all three HLS Element spacecrafts on their way to the moon. This demonstration used MEV mechanisms to capture a mass simulator representing the HLS DE, floating on a precision floor with near-zero friction. (Credit: Northrop Grumman)

“Essentially, we can simulate the free system with two elements essentially being docked together,” said Sally.  “So we did a simulation of the Descent Element docking with the Transfer Element.  Essentially, we had a mass representative simulator, roughly 7 metric tons, of the Descent Element interfacing with a double-the-mass simulator of the Transfer Element.”

“And in that demonstration, we were able to show a significant offset… starting initial conditions with large offsets, that would ultimately be attenuated as the capture was completed successfully.”

The next phase of ground testing will utilize Prototype #1 and use the actual lunar docking system derived from MEV technology.

For the actual mission, the Transfer Element will serve as the active vehicle during the docking process with the Descent Element in NRHO.  After those two elements are successfully joined, the Ascent Element will be the final piece of the lander launched to meet up with the stack.

At this point, the integrated lander will undergo a series of thorough checkouts to ensure all systems are ready for the launch and arrival of the first crew that will attempt to set foot on the Moon since December 1972.

Once the integrated lander is cleared, Orion will launch atop an SLS rocket, delivering its crew.  During docking operations with Orion, the Transfer Element will reverse docking roles and serve as the passive vehicle while Orion and its crew perform the active part of the docking sequence.

The first proof of concept test for the Lunar Docking System mechanism, which will be used for on-orbit mating of all three HLS Element spacecrafts, achieves “capture”. (Credit: Northrop Grumman)

“Once the crew is onboard, the entire stack will be propelled by the Transfer Element in its initial descent down to low lunar orbit, and then ultimately the lander will bring the astronauts to the surface,” noted Sally.

The primary maneuvers requiring a change in delta-v, change in velocity, will be performed by the BE-7 engine provided by Blue Origin.  This includes the first part of the initial descent from low lunar orbit to the Moon.

“The Transfer Element does perform part of that initial descent from low lunar orbit.  But then it is separated and the balance of the burn is done by the Descent Element,” added Sally.

The initial descent will be performed by the BE-7 engine using liquid oxygen (LOX) and liquid hydrogen that will have been in space for a maximum of five/six months at that point — given design lifetimes for the Transfer Element.

“We’re designing it for a planned mission duration of six months or less.  The actual timeline is significantly less than that six months.  One of the main functions that we have is that the Transfer Element needs to ensure that the integrated system can meet its loiter goals.  So NASA has a 90-day requirement for us to hang out in NRHO.  And so we provide that extended cryo, fluid management for that three-month period.”

Sally added: “Given that the crew will not be launched until the HLS is checked out and ready to go, there is a recognition there could be delays with Orion.  There’s also the sequencing of the other elements being launched.  So for us, the challenge within 90 days is that since we have a cryo system, we have to be able to address the boil off of that LOX and hydrogen.”

“So ensuring that during a protracted period we have a method of eliminating the boil off is what’s required, and with our liquid hydrogen and liquid oxygen cryo propellant experience… it made the most sense that we would utilize our experiences there for the Transfer Element.”

Honored to support @BlueOrigin in the delivery of a technical milestone for @NASA #Artemis program. Time to go back to the moon. Learn more. https://t.co/Hds1Sc6afs https://t.co/OGlhbYJlma

When asked why Northrop Grumman chose the Transfer Element over a pressurized element that would have synergized with their HALO module for Gateway and Cygnus vehicle for Station, Sally added: “We’re really leveraging the Cygnus vehicle in our service module significantly.  But we joined a team, and I really think we’ve got the best of three on the team given the respective roles of the partners.”

Per that partnership, Sally said “The team has gone from 0 to 1,000 in five months, and it’s just been incredible to watch it all work.  And the National Team, we have been able, in that very short period of time, to work as an integrated team.  So three major companies working seamlessly and effortlessly across a geographical divide and in a COVID environment has just been unbelievably phenomenal.”

With five months remaining in the initial performance period of the NASA contract, Sally expounded on what else has been accomplished and what lies ahead.

“We’ve just recently completed our Transfer Element SRR (System Requirements Review), and actually all Element SRRs were completed in the last month.  We completed ours on the 8th of October.  We had a really successful review.  We had an independent review team with a lot of very good feedback on that.”

“So from that SRR, we now have a lot of our requirements baselined.  The next major milestone will be the Integrated Lander PDR (Preliminary Design Review), which is going to be in December.  And then, after that, it will be followed in late-January by the Transfer Element PDR.”

“And then that will pretty much wrap up the 10 months for the period of performance, as that ends at the end of February.  So that 10 month period will have resulted in three major interim reviews and a preliminary design going into the next phase.”

The National Team’s Human Lander System design, led by Blue Origin, is one of three concepts competing for NASA contracts to either return humans to the Moon and/or aid in the sustainable future of lunar exploration and settlement.