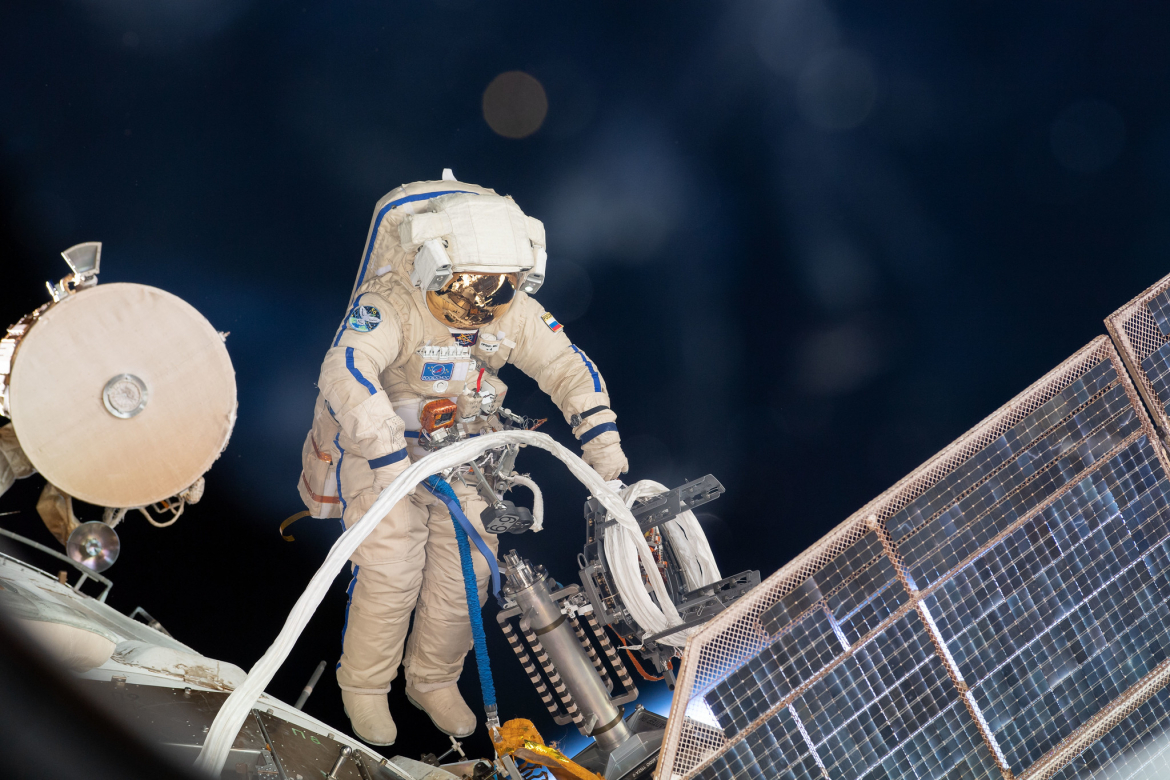 Russian cosmonauts Sergey Ryzhikov and Sergey Kud-Sverchkov performed a spacewalk on the Russian side of the International Space Station to prepare the outpost for the arrival of a new Russian research module named Nauka, a long-awaited science laboratory.

Today’s EVA (Extra Vehicular Activity — or spacewalk) was the 232nd in support of construction and maintenance of the Station, the 8th on the outpost this year, the first from the Poisk module’s airlock, and the first for both Ryzhikov and Kud-Sverchkov.

It was also the first in a series of tasks that will prepare for Pirs decommissioning, undocking, and disposal while also attempting to replace a fluid flow regulator on the Zarya module, retrieving hardware that measures space debris impacts, and repositioning an instrument used to measure the residue from thruster firings that are used to change the orientation of the ISS.

During the spacewalk, the cosmonauts first checked for leaks on the hatch; this was accomplished by first opening and examining the seals on the new airlock after depressurization.  The crew then closed the hatch and performed a partial repressurization of the module to ensure a good functionality.

After that, they depressurized again and exited the Poisk module, beginning the process of decommissioning the Pirs docking compartment.  Work outside included the attempted replacement of a flow control regulator panel on the Functional Cargo Block (FGB) module, Zarya, re-routing cables, and removing an experiment.

The cosmonauts were unable to perform the replacement of the flow control regulator when a bolt would not release on the new regulator’s transfer container.

The new unit was placed back in the Poisk module’s airlock, and the cosmonauts proceeded to the other tasks.  At the end of the spacewalk, the window cleaning activity was deferred to a subsequent spacewalk.

See the sequence of the events scheduled for this spacewalk were described in the below video from NASA:

Pirs and Poisk are located between the Zvezda and Zarya modules on the Russian side of the International Space Station.  In the LVLH (Local Vertical Local Horizontal) attitude, where the ISS pitches at four-degrees-per-minute to keep its belly pointed towards the Earth, the Poisk docking compartment faces space while Pirs faces Earth.

The EVA was expected to last for 5 hours and 33 minutes but completed after 6 hours 47 minutes.  NASA Astronaut Kate Rubins assisted the cosmonauts with suit-up and monitored their progress from inside the Station.

The Pirs docking compartment is being removed to make a place for the Nauka laboratory module, which will be the newest habitable space for the International Space Station.

It arrived at the Baikonur Cosmodrome in Kazakhstan on 19 August 2020 for final preparations before launch, which has been delayed for over 13 years.  Currently scheduled to launch on a Proton-M rocket No Earlier Than 20 April 2021, it will mark the resumption of Station expansion.

If on track, the current Progress MS-15 mission — instead of undocking Progress from Pirs — will remain attached to Pirs.  The connections between Pirs and Zvezda will be removed, and Progress will ease the docking compartment away from the ISS.

A few days later, Progress MS-15 will deorbit with Pirs for a destructive re-entry into Earth’s atmosphere, becoming the first module of the ISS to be permanently removed and destructively disposed of.  At present, no plans exist to remove any of the other original modules from the ISS on either the Russian or U.S. (which includes Canada, Japan, and ESA) side of the outpost. 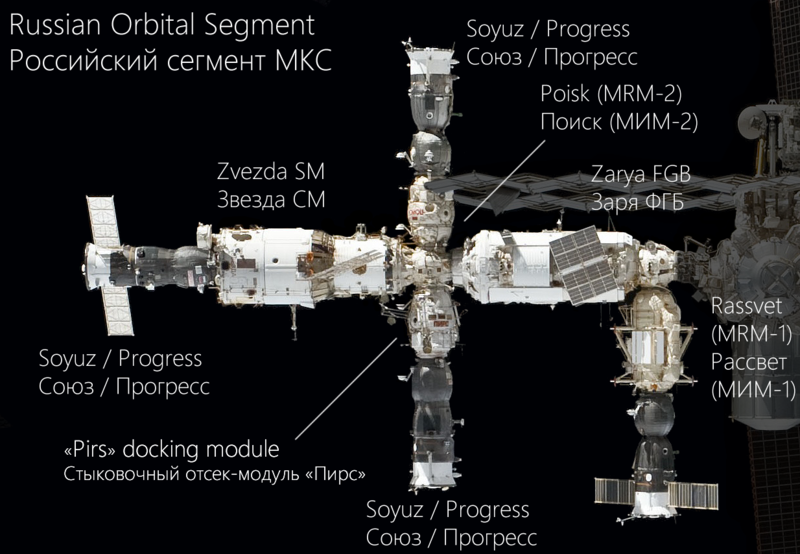 The configuration of the modules on the Russian segment of the International Space Station. (Credit: NASA/WikiCommons)

Manufactured by RKK Energia, the docking compartment is similar to the Mir Docking Module used on the Mir space station.  Pirs module was launched on 14 September 2001 on a Russian Soyuz-U rocket using a modified Progress spacecraft, Progress DC-1, as an upper stage and docked to the Station two days later.

Pirs has two primary functions: to serve as a docking port for visiting Soyuz and Progress spacecraft and serve as an airlock for Russian EVAs.

Pirs can also transfer fuel from the tanks of a docked Progress resupply vehicle to either the Zvezda Service Module Integrated Propulsion System or the Zarya Functional Cargo Block.

Nauka was first constructed as the backup to the currently-on-orbit Zarya module.  As such, both are of a similar design called the Functional Cargo Block (FGB).

The FGB design traces its roots to the Soviet TKS spacecraft that was designed in the 1960s to serve as a crew and cargo resupply vehicle for the Soviet Union’s Salyut space stations.  It consisted of two parts: the VA spacecraft and Functional Cargo Block, both of which could also operate independently.

The VA spacecraft itself was initially designed as a lunar crew vehicle, similar to the Apollo Command Module.  It would have carried up to three crew members during launch and landing and was notable in that it was intended to be reused — although this was only demonstrated once.

After being rejected for the Soviet lunar program, the VA was repurposed to become part of the TKS spacecraft.

Sergey @KudSverchkov and Sergey Ryzhikov are going to perform a spacewalk to prepare the docking compartment for Nauka module arrival and to mount the equipment on the outside surface of the ISS ➡️ https://t.co/KHf3JmT3qV pic.twitter.com/HhlQHC1Ztc

The FGB under this design served as a service and storage module.  It featured a spacious pressurized volume in its center, meant for cargo storage and docking equipment.  On the outside of the FGB were fuel tanks, maneuvering engines, solar arrays, and a docking port.  The TKS flew four times and docked to Salyut stations three times.  None of those missions were crewed.

Following the cancellation of TKS, the Soviet space program soon realized other possibilities the FGB design could offer.  In 1987, the Kvant-1 module was launched to the Mir space station.  Rather than having its own control system, it was delivered to the station by a Functional Service Module — derived from the FGB.

Several other Mir modules were themselves derived from the FGB, including Kvant-2, Kristall, Spektr, and Priroda. Repurposing the FGB design for several of Mir’s modules saved both time and money.

In 1998, the next FGB-derived module – Zarya – launched on a Proton rocket.  Zarya was the first module of the International Space Station and provided power, control, and propulsion for the early outpost.  It was built by Russia under a contract from NASA.  In case of a launch failure, a backup to Zarya was built from spare components.  Named FGB-2, its construction was halted at around 70% completion.

After the successful launch of Zarya, FGB-2 was placed in storage, and several plans were proposed for incorporating the module into the ISS, including making it a docking hub, laboratory, or even a single-use resupply vehicle.

Roscosmos then accepted a proposal to convert FGB-2 into the Multipurpose Laboratory Module, or MLM.  At this point, the module was expected to launch in 2007.  As its name suggests, the MLM will be a multipurpose — although mainly scientific — module.  It will feature crew quarters, research stations, propulsion, solar arrays, a European robotic arm, and an experiment airlock, among others. 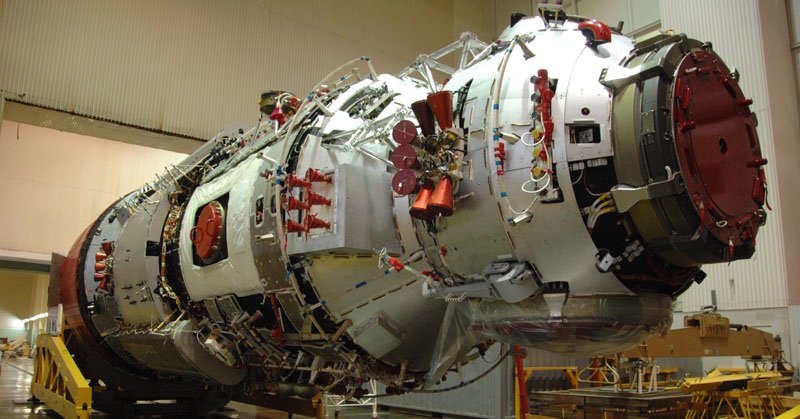 The Nauka module, in preparation for launch in 2021. (Credit: RKK Energia)

However, not all of those will be brought to orbit with the MLM.  The Rassvet Mini Research Module was launched to the ISS in 2010 onboard the Space Shuttle Atlantis and brought several of the MLM’s components to the Station.  Rassvet launched with the MLM’s radiator, experiment airlock, and a spare joint for the European Robotic Arm, all of which will be installed onto the MLM after it arrives.

The MLM will also feature propulsion systems sufficient to rendezvous and dock autonomously with the ISS.  The onboard fuel tanks will be used for propellant storage once attached to Station.  The MLM’s solar arrays will also help lower the Russian segment’s reliance on the main set of solar arrays that are technically part of the U.S. segment.

The new module will contain water and air purification systems, a new galley, and a toilet.  Its thrusters can also be used as a backup to control the ISS should those on Zvezda fail.

The MLM’s name, Nauka, is a Russian word for “science.”

After its arrival and fitting-out, Nauka will become the primary laboratory module on the Russian segment.  Currently, Russia has two small laboratory modules – Rassvet and Poisk, both of which will be dwarfed by Nauka.