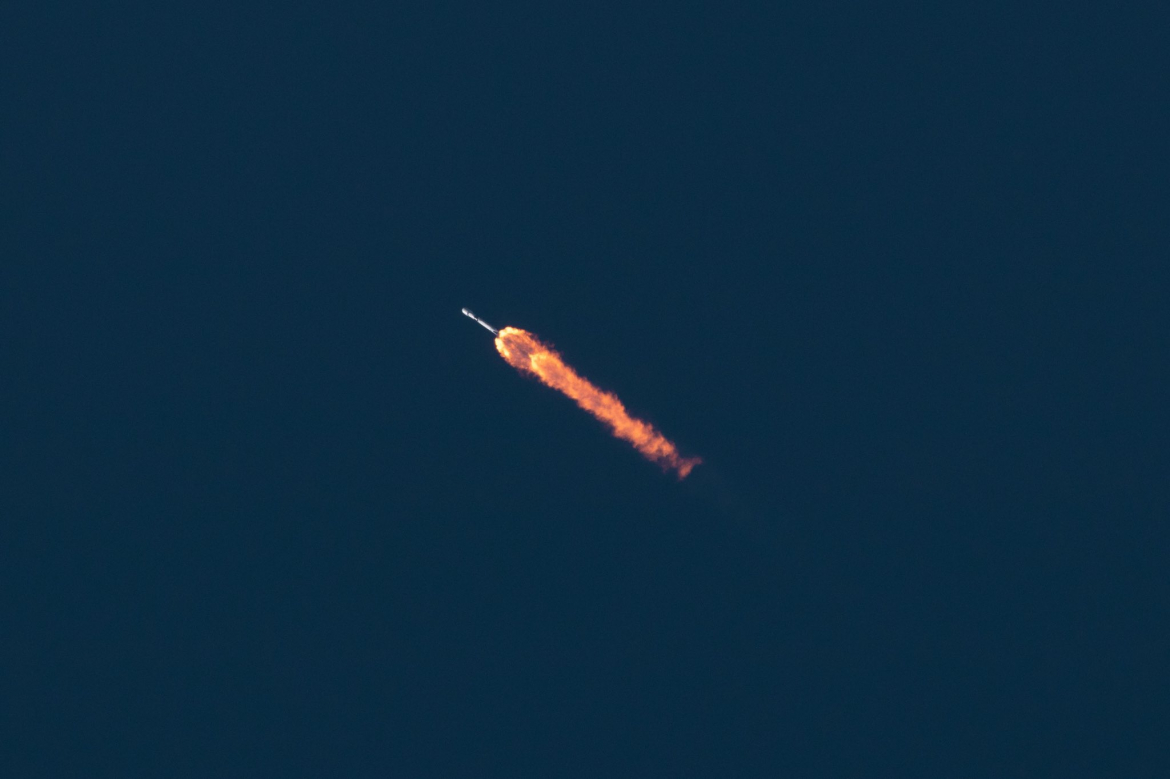 Fresh off their second crewed launch for NASA, SpaceX temporarily shifted focus on launches to the U.S. West Coast, where a Falcon 9 rocket launched the Sentinel-6 Michael Freilich oceanography satellite in cooperation with NASA, the National Oceanic and Atmospheric Administration, the European Space Agency, and various other partners.

This mission was the 100th for SpaceX’s workhorse Falcon 9 launch vehicle (but only its 99th launch), and the 108th mission in general for the company since its creation in May 2002. This was also the 95th orbital launch attempt made by any launch provider so far in 2020.

The first stage of the Falcon 9 that will launch Saturday’s mission was core B1063.1. This designation originates from SpaceX’s internal booster naming/numbering scheme, with B1063 being the 63rd Falcon booster core built by the company at their headquarters/production facility in Hawthorne, California, and the “.1” signifying the booster’s first flight.

The mission is also referred to as the Jason-Continuity of Service (Jason-CS) mission and was jointly developed by NASA, the National Oceanic and Atmospheric Administration (NOAA), the European Space Agency (ESA), the European Organisation for the Exploitation of Meteorological Satellites (EUMETSAT), and France’s Centre National d’Etudes Spatiales (CNES).

Sentinel-6A Michael Freilich is the latest in a series of spacecraft designed to monitor changes in sea states and aims to continue high precision ocean altimetry measurements in the 2020-2030 timeframe alongside an identical spacecraft, Sentinel-6B, which is due to launch sometime in 2025.

The Michael Freilich spacecraft was built by Airbus Defence and Space at their Friedrichshafen facility in Germany. It ia 5.15 meters in length, 2.35 meters in height, and 2.58 meters in width. The satellite weighs approximately 1,192 kilograms (2,628 pounds) when fully fueled for launch.

The spacecraft obtains electrical power via two 17.5-square-meter body-mounted solar arrays, which cover the top and sides of the satellite like a tent (hence its house/tent-shaped appearance). Excess energy will be stored inside a double-module lithium-ion battery, which has a total capacity of approximately 200 amp hours. Sentinel-6A’s electrical system is able to provide an average of 1 kilowatt of power while on orbit.

Communications between the satellite and ground stations is accomplished using microwave S-band and X-band transmitters and antennae, which are located on the nadir (Earth-facing) panel of the spacecraft bus.

The spacecraft is also outfitted with a series of thrusters for propulsion, with the fuel consisting of hydrazine monopropellant. This propulsion system is actually two independent sections, with four 8 Newton thrusters for each section.

Launch and landing of Falcon 9 during the Sentinel 6 mission. More to come.

The Sentinel-6A satellite’s on-orbit attitude will be managed by a system consisting of sensors, actuators, and software. Subsystems include reaction wheels, magnetic torquers, magnetometers, a rate measurement unit, an Earth and Sun sensor, a star tracker, and precise orbit determination instruments.

These subsystems will all work simultaneously to provide 3-axis stabilized Earth-pointing attitude control during all mission modes and measure spacecraft rates and orbital position.

Sentinel-6A Michael Freilich was transported to SpaceX’s facilities at Vandenberg Air Force Base in California on 24 September in order to be prepared for its launch on Falcon 9. This included final tests and checkouts, as well as fueling the satellite for launch.

The launch was originally scheduled to occur on 10 November. However, the flight was postponed for several days as SpaceX and NASA started investigating off-nominal behavior observed during several firings of Merlin-1D engines – 9 of which power the first stage of the Falcon 9 rocket.

The behavior was first noted as an issue when the launch of the GPS III SV04 spacecraft was aborted at T-2 seconds before liftoff on 2 October due to two engines experiencing early-start behavior.

The engines were subsequently removed from the booster and sent back to SpaceX’s dedicated testing facility in McGregor, Texas, for a series of tests — during which the issues were replicated. Following these tests, the engines were scanned, torn down, and inspected further.

The joint investigation concluded that the problems were attributed to a blocked relief valve in the gas generator of the engines, and that a masking lacquer (described by SpaceX Vice President of Mission Assurance Hans Koenigsmann as “sort of like nail polish”) was to blame for the blockage. This lacquer was left over from the engine building process, when part of the gas generator was anodized.

Further reviews determined this issue could be present on multiple engines on newly built-boosters. Thus, all Merlin-1D engines on affected cores were inspected, including B1061 (the booster that launched the Crew-1 mission on 15 November) and B1063 (the Sentinel-6 Michael Freilich booster).

Upon further testing and inspections, it was decided that SpaceX would replace two engines on the first stage. As a result, the launch of Sentinel-6 Michael Freilich was delayed to Saturday, 21 November.

The spacecraft was fully encapsulated inside the Falcon 9 rocket’s 5-meter diameter payload fairing on 3 November in preparation for integration onto the launch vehicle. During this time, SpaceX began shipping the two replacement Merlin-1Ds to Vandenberg for installation and testing.

NASA, SpaceX, ESA, and other program managers held a Flight Readiness Review for the mission on 16 November and concluded the flight was ready to launch on 21 November at 09:17 Pacific Standard Time (17:17 UTC).

Launch. Land. Repeat. A #SpaceX Falcon 9 rocket lifting @NASA’s Sentinel-6 satellite into orbit from California’s Vandenberg AFB and then coming back to land next to the launch pad. A beautiful end to the West Coast launch drought. @NASASpaceflight #sentinel6 #nasa pic.twitter.com/K3ydTfCQJt

A day later, SpaceX conducted a static fire test of B1063’s nine Merlin first stage engines on pad SLC-4E and verified the engines had performed nominally. Following this test, the rocket was rolled back inside SpaceX’s Vandenberg Horizontal Integration Facility for integration and final checkouts.

The entire stack was then rolled back out to the pad and lifted vertical on the night of 20 November local time in preparation for launch.

The business end of the countdown began at T-38 minutes to liftoff, when the launch director will poll the mission teams to proceed into propellant loading operations. The auto-sequence began with rocket and pad systems commencing the flow of chilled RP-1 fuel into both stages of the Falcon 9 at T-35 minutes, along with liquid oxygen (LOX) loading into the first stage. LOX loading on Falcon 9’s second stage began at T-16 minutes.

At T-7 minutes, the LOX pre-valves on the nine Merlin-1D first stage engines opened, allowing LOX to flow through the engine plumbing and thermally condition the turbopumps for ignition. This process is known as “engine chilling” or “chilldown”, and is used to prevent thermal shock that could damage the motors upon startup.

At the T-1 minute mark, Falcon 9’s onboard flight computers ran through final checks of the vehicle’s systems and finalized tank pressurization before flight. The launch director gave a final “go” for launch at T-45 seconds.

The nine Merlin-1D engines ignited at T-3 seconds, with liftoff taking place at T0 following a quick final check by the onboard computers to verify that all systems are operating as expected. 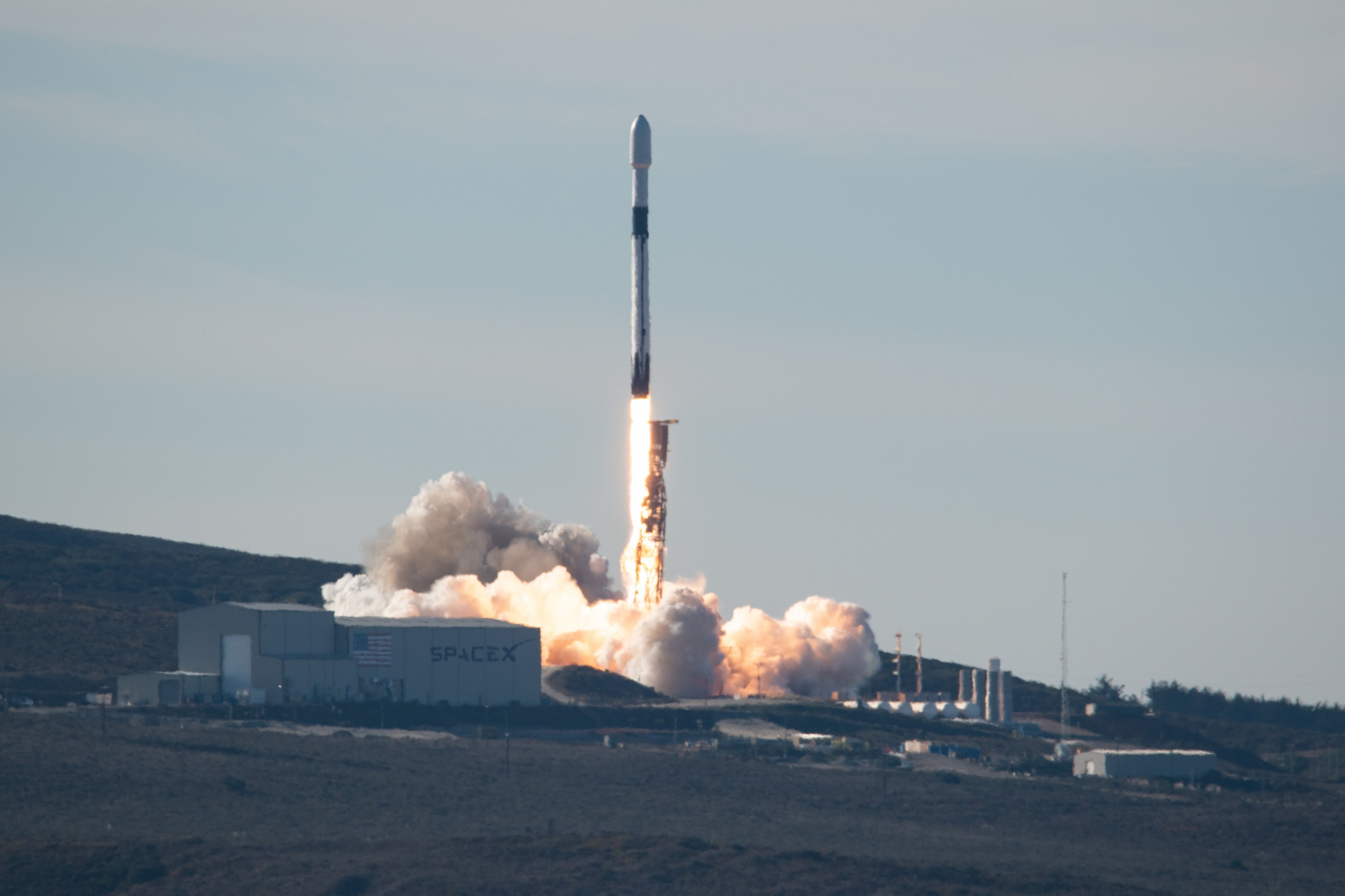 Falcon 9 lifts off on the Sentinel 6A mission. (Credit: Michael Baylor for NSF/L2)

After lifting off from SLC-4E, Falcon 9 began to pitch downrange as it accelerated towards orbital velocity. At T+1 minute 1 second, the vehicle passed through the region of maximum aerodynamic pressure, or “Max-Q”. During this portion of flight, mechanical stresses on the rocket are at their highest.

The first stage burned until T+2 minutes 17 seconds, at which point the engines shut down simultaneously in an event known as MECO, or Main Engine Cutoff. Stage separation occurred shortly afterward, with second stage Merlin Vacuum engine ignition taking place at T+2 minutes 28 second. Upon engine startup, the second stage continued to carry the Sentinel-6 Michael Freilich to a 1,336 kilometer (830.2 mile) non-Sun-synchronous orbit, with an inclination of 66 degrees.

The 5-meter payload fairing housed the spacecraft during the initial phases of launch until it is deployed at T+2 minutes and 50 seconds. Both halves of the fairing will descend back to Earth to be recovered by support ship NRC Quest.

Following stage separation, Falcon 9’s first stage flipped around and fired three of its nine Merlin-1D engines to perform a boostback burn, so as to divert its trajectory back towards Landing Zone 4. The entry burn at T+6 minutes 55 seconds refined the booster’s course and slowed its descent. Stage 1 touched down at T+8 minutes 19 seconds, with the final landing burn being performed by the center Merlin engine. 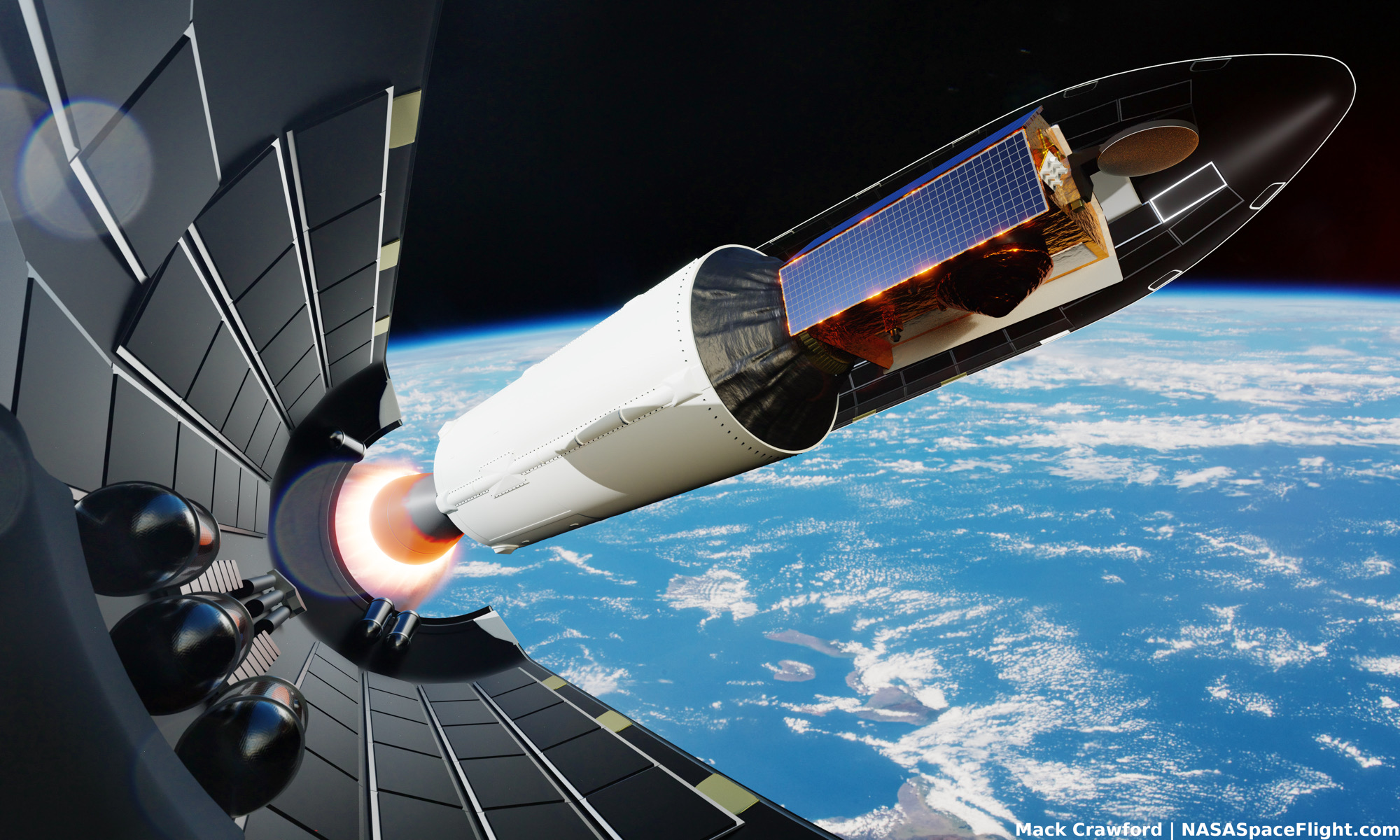 Artistic render of Falcon 9 fairing separation during the launch of Sentinel-6 – credit: Mack Crawford for NSF/L2

The Merlin Vacuum engine on Falcon 9’s second stage meanwhile shut down at T+8 minute 18 seconds, in an event known as Second Engine Cutoff-1 (SECO-1). This marked the completion of the first of two burns for this mission and inserted Sentinel-6 Michael Freilich into a low parking orbit of Earth.

Following a 45-minute-long coast phase, the Merlin Vacuum engine re-ignited for its second and final burn of the mission at T+53 minutes 18 seconds. The burn lasted for 10 seconds before Second Engine Cutoff-2 (SECO-2) occurs.

The Sentinel-6 mission was one of many that SpaceX hopes to launch before the end of 2020, with others like Starlink V1 L15 (16th Starlink flight overall), NROL-108, CRS-21 (the first Cargo Dragon 2 resupply mission to the ISS), SXM-7, and Turksat-5A still waiting in the wings.

Starlink L15 should be next up after Sentinel-6, with launch targeted for no earlier than 22 November at 21:56 Eastern Standard Time (02:56 UTC on 23 November).

Following the launch of Sentinel-6, the next SpaceX launch set to take place from Vandenberg Air Force Base is the SARah-1 phased radar array satellite, currently scheduled for no earlier than February 2021. The spacecraft is expected to fly with smaller rideshare payloads.