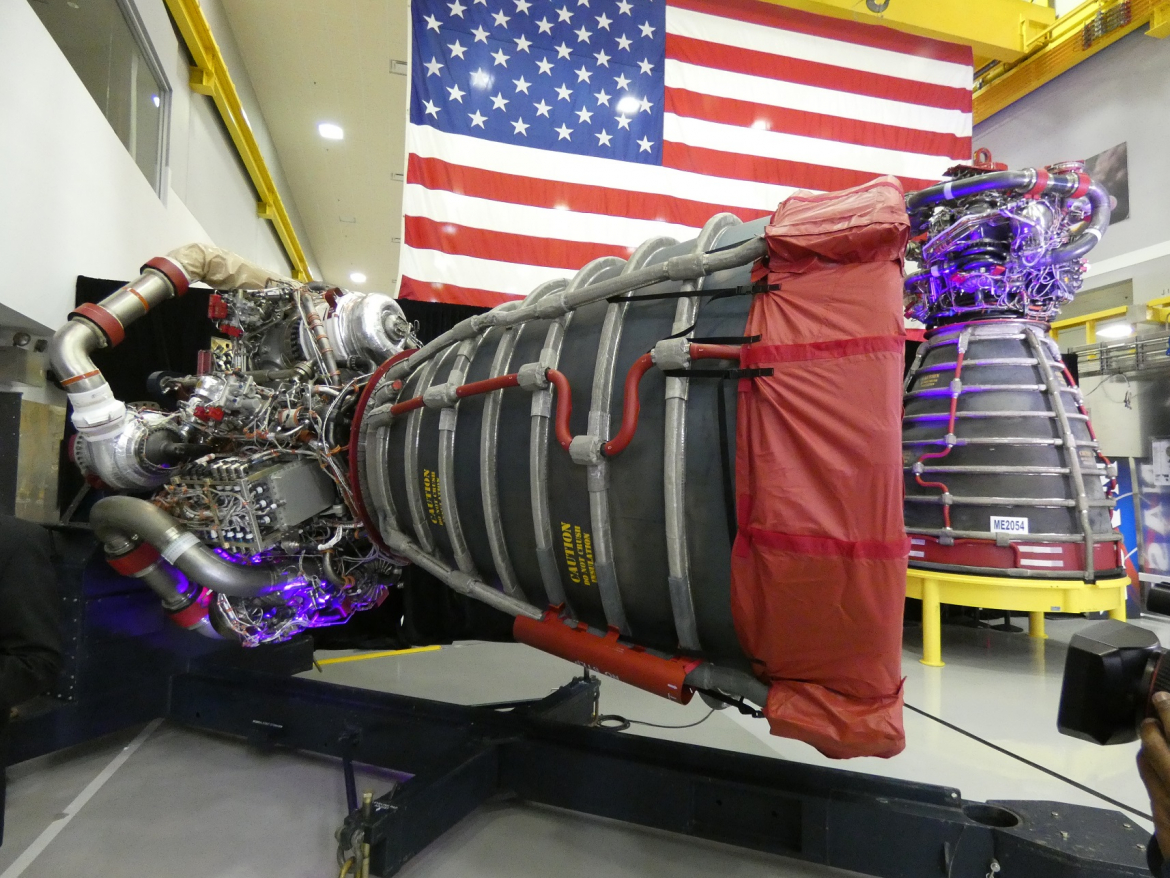 The Liquid Engines Office for NASA’s Space Launch System (SLS) Program is planning a busy schedule of test campaigns next year in parallel with efforts to complete preparations for the vehicle’s first launch. Existing Aerojet Rocketdyne hydrogen-oxygen engine designs and hardware will be used for the SLS core and upper stages, but both the space agency and the prime contractor for the RS-25 and RL10 engines are investing in upgrades and technology development to make the engines more cost-effective.

The Boeing-built Core is a ground-started sustainer stage that is lifted out of the low atmosphere with the high-thrust assistance of two large Solid Rocket Boosters provided by Northrop Grumman. The Core and Boosters in the initial SLS Block 1 vehicle deliver an injected payload mass that includes a fully-loaded United Launch Alliance (ULA) Interim Cryogenic Propulsion Stage (ICPS) into an initial suborbital trajectory.

The high-apogee, low perigee injection orbit allows for the ocean disposal of the remains of the Core Stage, which is ripped apart, melted down, and destroyed during an uncontrolled reentry into the atmosphere at orbital speed. The ICPS then performs a burn at apogee to raise the perigee and stabilize/circularize the orbit.

Adaptation of the existing SSME hardware to SLS operating conditions was completed in a certification program that ran through 2017; in addition to certifying the Shuttle engines to run at higher thrust levels, a new engine controller design was qualified for SLS to begin flying with the program’s first launch. SLS inherited 16 flight SSMEs manufactured around the turn of the century for the Space Shuttle Program to power the first four Core Stages. 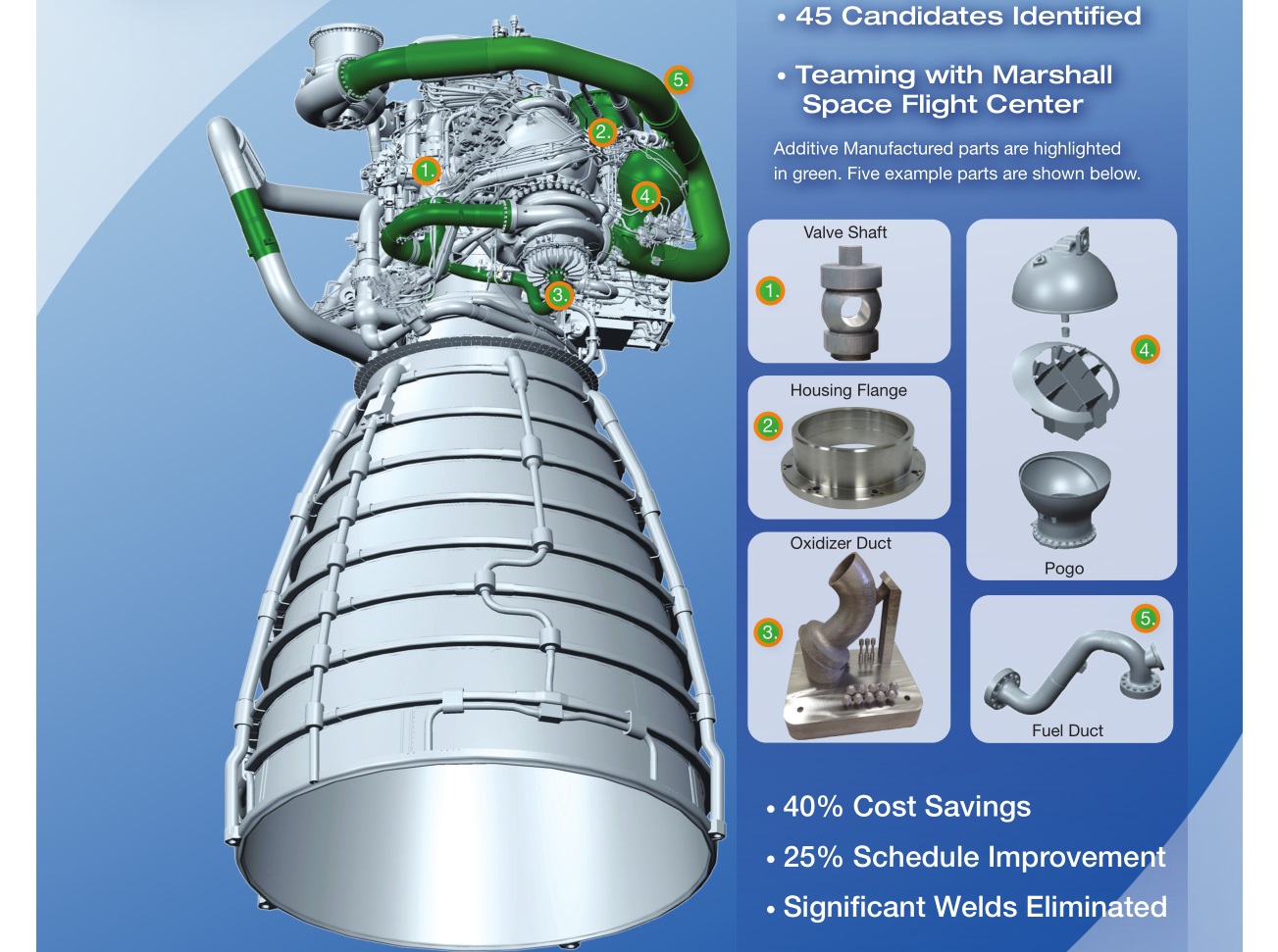 (Photo Caption: An Aerojet Rocketdyne graphic showing some parts on the production restart engines that will use additive manufacturing, also called “3-D printing.” In addition to the parts shown here around the powerhead, modern manufacturing techniques were also employed to produce new main combustion chambers and nozzles.)

Alongside certification of the existing “adaptation” engines stored from Shuttle days, NASA separately contracted Aerojet Rocketdyne in late 2015 to restart production of new engines and certify the new process.

The form, fit, and function of the existing SSME is being carried forward, along with the design’s reliability. Still, SLS is an expendable vehicle and more engines will need to be built to support launches compared to the reusable Shuttle orbiter vehicles.

The new engines will also be certified to fly at a higher performance level of 111% of the original Shuttle rated power level (RPL).

While attention is focused on the Core Stage Green Run design verification campaign in the B-2 Test Stand at the Stennis Space Center in southern Mississippi, the production restart program is delivering new components to Aerojet Rocketdyne’s final assembly facility on the grounds of the federal city.

“All the major components, that’s all four pumps on the engine, the powerhead, the nozzle, the MCC [Main Combustion Chamber], the engine controller, all those parts basically come off of their production lines and then they all get shipped down to Stennis,” Johnny Heflin, manager of the Liquid Engines Office for NASA’s SLS Program, said in an interview with NASASpaceflight.

With the exception of the powerhead at the heart of the engine, components like pumps and nozzles and controllers are interchangeable. They are the focus of the restart production lines at two of Aerojet Rocketdyne’s facilities in Canoga Park, California, and West Palm Beach, Florida. Honeywell produces the RS-25 engine controllers at their Clearwater, Florida, facility.

“There is no engine production line. There are a lot of component-level production lines,” Heflin explained. “So I’ve got Main Combustion Chambers in production and they’re lined up in the queue.”

The components that are farther along are being hot-fired in single-engine test series in the A-1 Test Stand at Stennis. Shuttle-era development engines 0525 (E0525) and 0528 (E0528) are being overhauled with new production restart component hardware in a “retrofit” test series that will culminate in certification of the new production system and uprated engines.

Both E0525 and E0528 were used in the Retrofit 1 test series, which was split into two sets of tests that were run from late-2017 through early-2019. The first part of the test series, called Retrofit 1a, introduced a new, 3-D printed pogo accumulator assembly to replace the old one.

“That’s a huge additive advancement for us, that pogo accumulator used to be, I think thirty-eight different parts,” Heflin noted. “Now it is three pieces and one weld, one circumferential weld around the outside. The outer body of the pogo used to require a lot of welds.”

The second half of the test series (Retrofit 1b) tested a new, hot-isostatic press (HIP) bonded MCC, bringing a manufacturing process over from one of Aerojet Rocketdyne’s other engines, the RS-68. 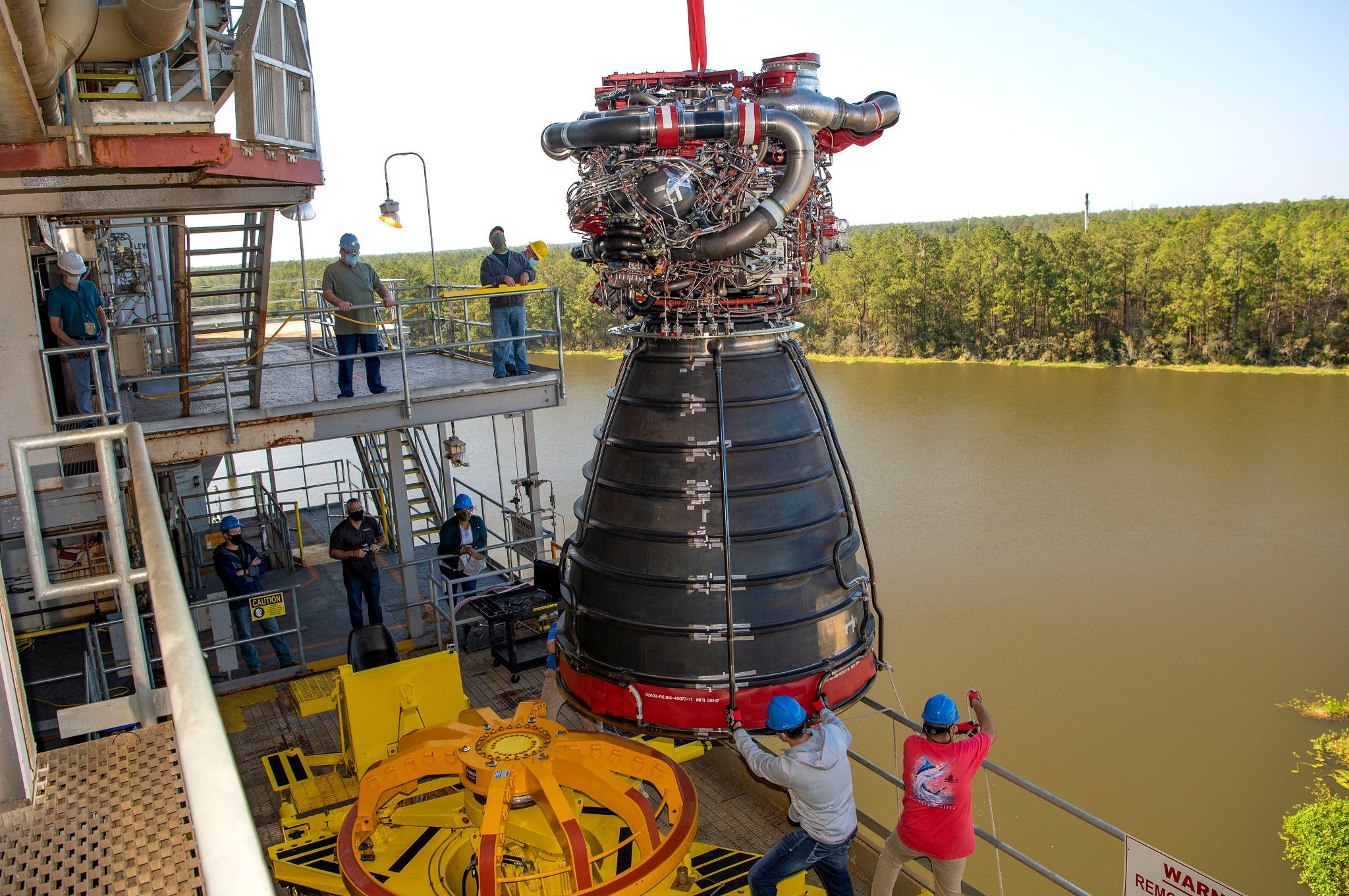 (Photo Caption: RS-25 development engine 0528 during lift operations in the A-1 Test Stand at Stennis Space Center last week. The former Shuttle-era ground-test SSME now sports RS-25 production restart components that will be exercised in an 8-test hot-fire series that will begin as support equipment becomes available after the nearby Core Stage Green Run campaign.)

Now, E0528 is ready to handle the Retrofit 2 test series; installation into the A-1 stand was in work last week. Along with continuing to test the new pogo and MCC components, the engine is retrofitted with new units from restarted production lines like the engine turbopumps.

Another component coming off the production line with new 3-D printed parts and beginning testing in Retrofit 2 is one of the main engine valves, the oxidizer preburner oxidizer valve (OPOV). “We’re also for the first time going to be testing an additively-manufactured ball-shaft on one of our valves on the engine, on the OPOV,” Heflin explained.

“That’s the first time we will have gotten any hot-fire data on those SLM (selective laser melting) ball-shafts, so that’s another big objective for us. The housing is a legacy design, but the ball-shaft is new.”

After the long break in single-engine RS-25 testing, hot-fire tests to support production restart certification are expected to occur frequently in 2021 and 2022. After the eight-test Retrofit 2 series, E0525 is scheduled to follow shortly afterward to begin the Retrofit 3 series.

“All the hardware is on schedule to get delivered to support that and we’re planning on starting assembly in March with testing on the Retrofit 3 engine in the summertime,” Heflin said. Aside from the original powerhead of E0525, almost all of the remaining engine hardware will be retrofitted with new components coming off the restarted production lines.

E0525 will also be fitted with another new engine nozzle for the Retrofit 3b series, which will help certify the new engine production. “The [certification] requirements are based on the components and there’s a whole set of criteria on how you define that, but the certification is also taking advantage of the Retrofit 3 series,” Heflin noted. “Some of the components require hot-fire tests on two different engines.”

The first new flight engine is currently expected to be acceptance tested at Stennis in the first half of 2023, with subsequent flight engines following every three months after that.

Earlier this year, NASA extended the RS-25 production restart contract with Aerojet Rocketdyne to include production and delivery of an additional 18 flight engines, bringing the total to 24 new units that would be enough to outfit six Core Stages. The production rate for the engines will also be increased to support the annual delivery of four engines, which supports one SLS flight per year.

Beyond that, the SLS Program is partnering with industry and other agency organizations like the Space Technology Mission Directorate to look at future technology to reduce production time and ultimately production costs. Reducing the program’s costs is a key objective for the long-term transition from vehicle development to production and operations.

“We are looking at every single aspect of everything that we do to try to bring costs down,” Heflin said. “Whether it’s the operational procedures, the way we conduct meetings, the process that we use to go through engine acceptance, the manufacturing techniques, you name it and it’s all under the magnifying glass for cost reduction and to improve affordability, lowering the cost of the vehicle down.” 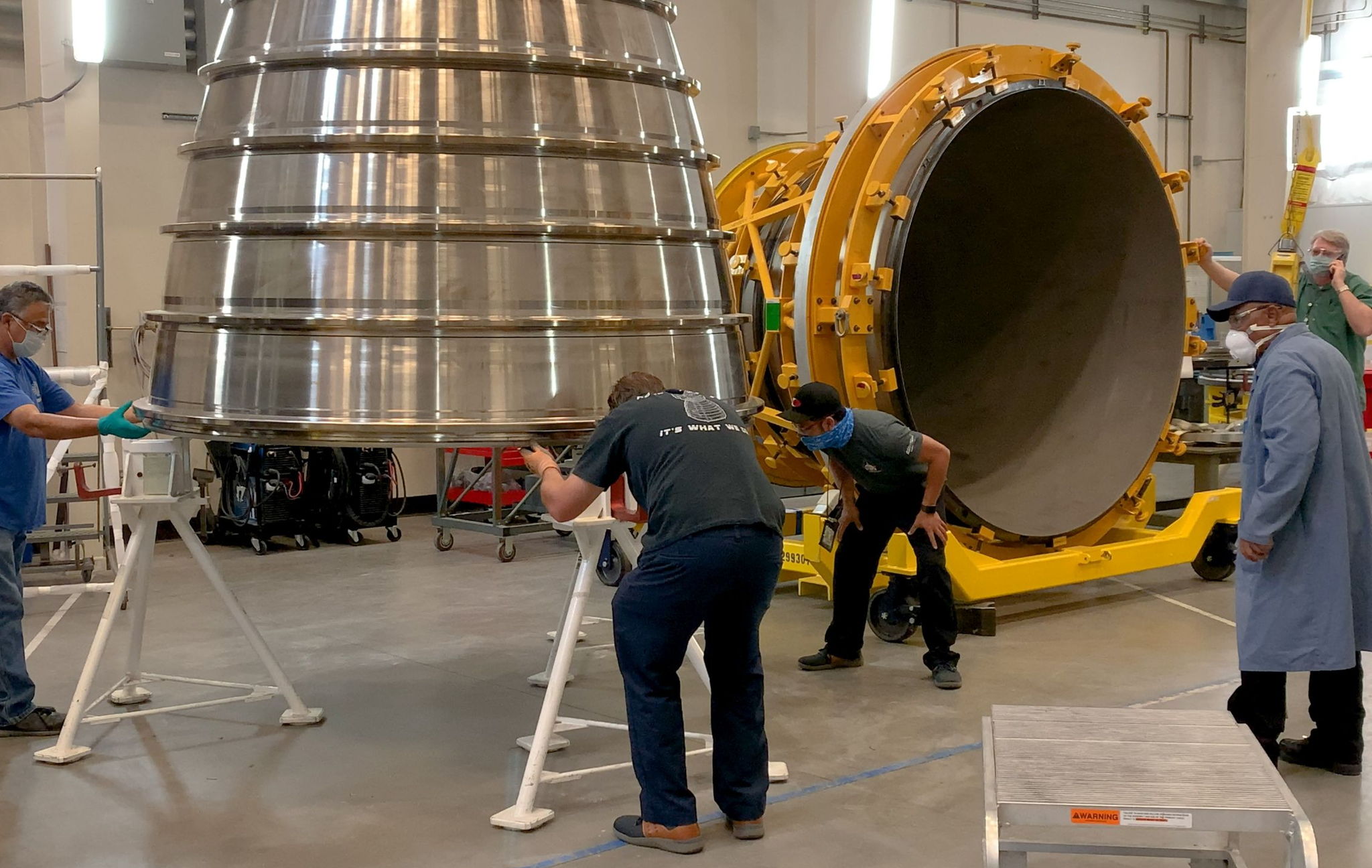 (Photo Caption: Two nozzle jackets for future RS-25 engine assemblies are processed at Aerojet Rocketdyne’s Canoga Park, California, facility. Manufacturing of the nozzle jackets was modernized during production restart, reducing the part count to four pieces from a few dozen. Later in the full production of the nozzle assembly, over one-thousand cooling tubes are precisely arranged on the inside of the jacket and then a brazing process fuses them together.)

The RS-25 engine nozzle is one of the most labor-intensive parts to build; the nozzle is protected from the high temperature of engine combustion by liquid hydrogen that runs through over 1,000 cooling tubes that line the inside of the nozzle jacket. Once those separate parts are manufactured, a complicated braze process is necessary to fuse the individual coolant tubes to the nozzle jacket. One of the ideas being researched is to 3-D print an engine nozzle with the cooling channels built into the nozzle wall.

“We’re doing some technology development work that’s a fantastic partnership between my office, Aerojet Rocketdyne, and Marshall [Space Flight Center] engineering in the additive world to explore things like [a] directed energy deposition channel wall nozzle,” Heflin explained. “We’re also looking at larger-scale 3-D printing and something called laser-wire closeout, so we’re looking at lots of different emerging technologies and trying to evolve that and develop a feasible on-ramp for how we can leverage that technology on the engines.”

“So that’s some of the really exciting things in terms of technology that could really help in the long run with additional what I could call ‘leap-frogs’ in affordability. If we can complete that, and the technology proves to be sound and we have something that’s manufacturable and it’s something that we can on-ramp, then it has huge advantages, not just for us but for NASA and aerospace as a whole, right?”

“[It would mean] we can build parts in three months instead of five years, for example, and that is revolutionary in terms of affordability and cost reductions,” he added. There is still a lot of research and development to go before NASA can determine if it’s possible to apply specifically to an engine like the RS-25.

“What we’re learning as we go through all the additive work is after a while you realize it’s not the panacea for everything,” Heflin said. “It fits well in some applications and not others and you’ve also got to figure out how to build our particular designs.”

“The vast part of what we’re doing now is [researching] ‘can we build our designs?’ We’re doing a lot of small scale, subscale work to show that we can do it as well as trying to grow the size of the parts that we can build.”