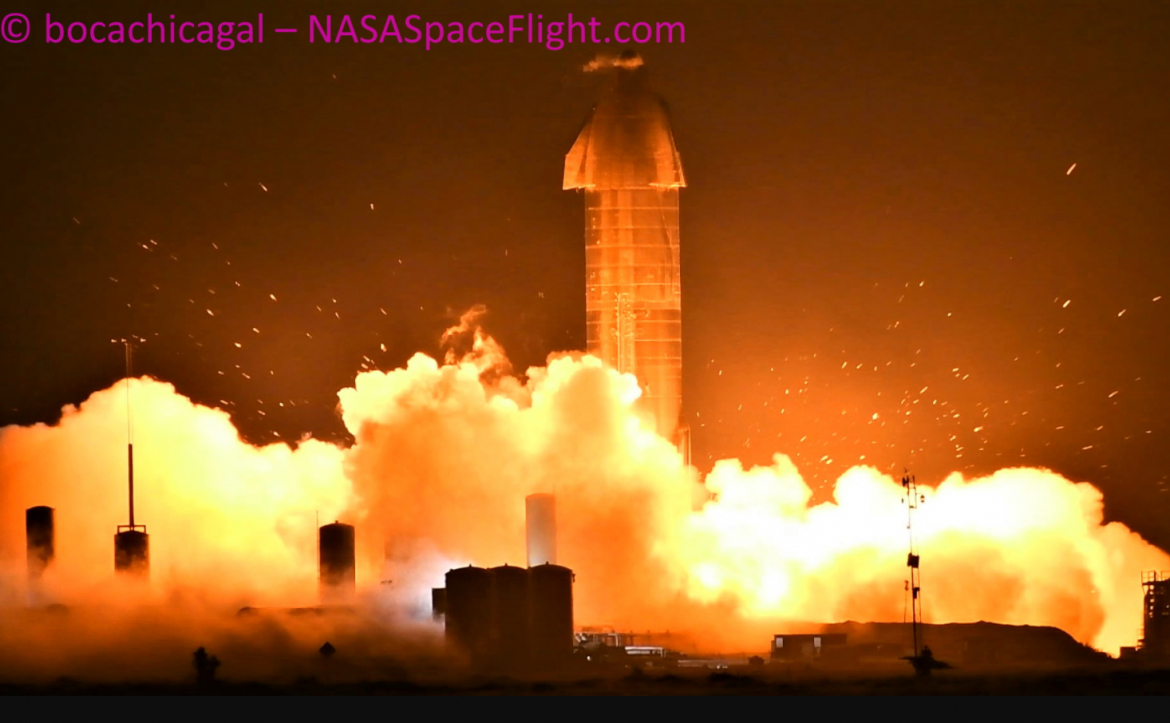 Following Starship SN8’s eventful Static Fire test, it was feared the test flight would likely suffer from a lengthy delay. However, thanks in part to a burst disk that avoided a damaging “pop” scenario, SN8 may yet still fly to 50,000 feet this month, albeit with a realigned trio of Raptor engines.

While repair work on SN8 is conducted at the Launch Site, there’s been no slowdown of the incredible production cadence a short distance down Highway 4, with three Starships assembled or in a stacking processing flow. The first sections of the BN1 prototype Super Heavy are also into stacking operations in the High Bay.


Starship SN8 was in the process of following up her initial three engine Static Fire test with a new trio of ignitions over the space of around a week.

The first test involved the first-ever firing of a Raptor engine via the two Header Tanks, one of which – the LOX Header Tank – being located at the nosecone’s tip. Previous Starship prototypes (bar the pathfinder MK1) have been tested without a nosecone.

That test went to plan, despite social media speculation citing concerns with the sparks that were seen flying into the air during ignition. Those sparks were from the pad surface, not the engine letting go – as later confirmed by SpaceX pressing on to the second test promptly without removing any of the engines.

The second test was a near-repeat to the first. However – this time two Raptors were lit.

The reasoning for the single, then dual, engine firing relates to the latter part of Starship SN8’s test flight, with the Raptors involved with flipping Starship from horizontal to vertical and then conducting the landing burn.

Although a hazard notice was posted to Boca Chica Village residents – such as Mary (@bocachicagal) – pointing toward a Static Fire test on Thursday, it was understood that SpaceX would opt to conduct a Wet Dress Rehearsal (WDR) and shoot for engine ignition in the following window.

However, likely via catching up with testing milestones, the decision was made to fire up the two Raptors as per the test window’s original plan.

Again, sparks could be seen flying during ignition. However, this time it was expected based on the experience of the previous test.

What wasn’t expected was a stream of molten liquid dripping from one of the engine nozzles onto the pad surface several seconds after engine shutdown. That clearly wasn’t a nominal situation.

That immediately moved the focus on the top part of the vehicle, with the hope of seeing a release of pressure, as opposed to a potential “RUD – Rapid Unscheduled Disassembly”.

Thankfully, the burst disk – a specially designed sheet of metal that is weakened to the point an overpressure breaks the sheet before the pressure rises to the point of an explosive event – worked as planned, mitigating the lack of primary valve control via the loss of pneumatics.

A plume of released LOX was observed emanating from the top of the nosecone, effectively saving SN8.

Burst disk worked, so vehicle appears to be ok. We’ll have to swap out at least one of the engines.

With SN8 undergoing safing options, the post-test turnaround plan related to swapping out the Raptor at fault for the post-firing incident.

“Maybe melted an engine preburner or fuel hot gas manifold. Whatever it is caused pneumatics loss. We need to design out this problem,” added Elon during the test.

On Saturday, engineers removed one of the Raptors, spotted by Mary (@bocachicagal) as SN32.

It was not immediately known which Raptor would replace the removed engine.

Options included a repaired SN39 – which was initially part of Starship SN8’s trio before being replaced by SN36 – or the newly arrived SN42 could be advanced into action.

Raptor SN42 has come out to play with Starship SN8. 🤩🔥🚀@NASASpaceflight https://t.co/FyEdiyTMe2 pic.twitter.com/kki0TdEAys

Additional Raptors will also be in various stages of preparation for shipping to Boca Chica, following their initial testing at SpaceX’s McGregor Test Facility. 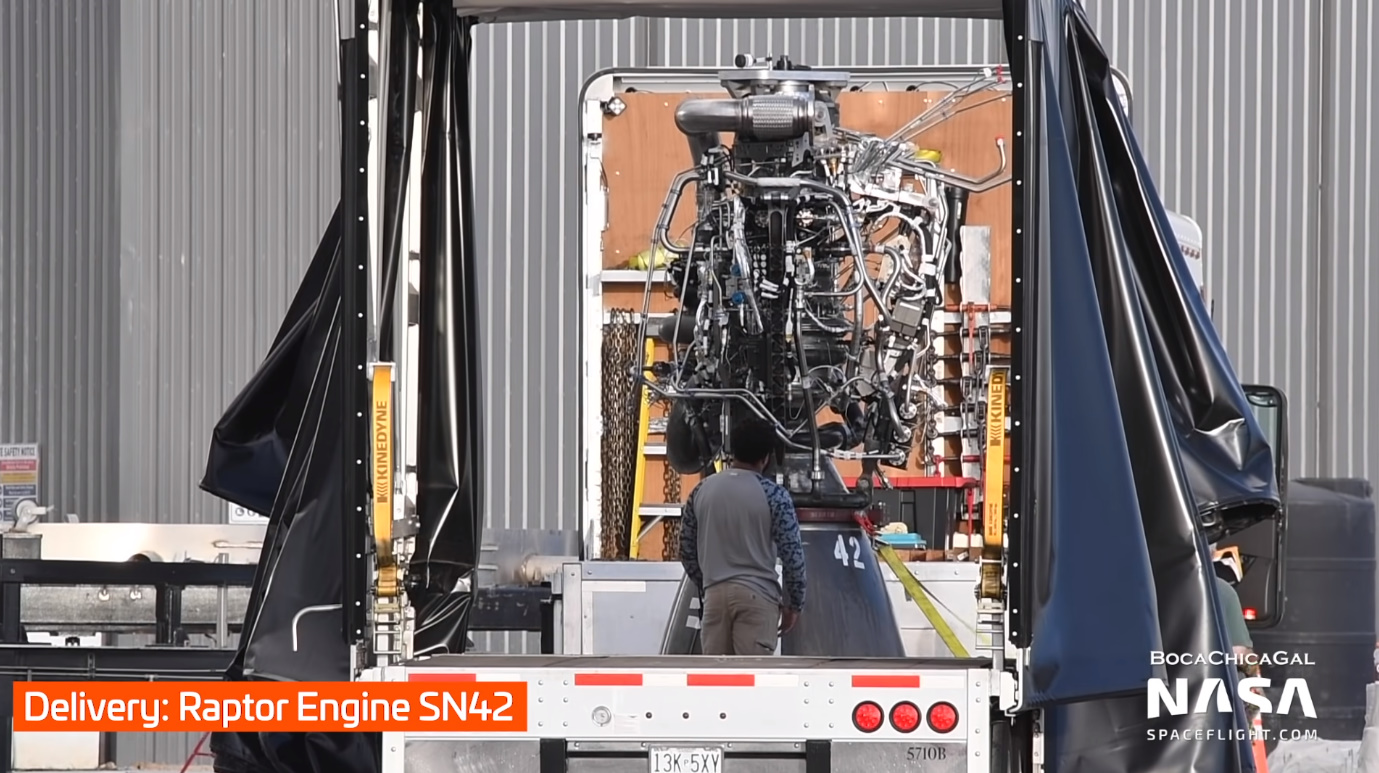 SpaceX likely has at least six flight engines ready to go, based on the potential of losing SN8 during the test flight and the objective of pushing Starship SN9 into action shortly thereafter.

The installation of the replacement engine will automatically call for another Static Fire test, as had been previously planned to follow up the Header Tank-related test firings due to the swap out between SN39 and SN36.

The timing of that three engine Static Fire test could be within a week, ultimately returning Starship to an imminent test flight stance, and potentially still in the month of November. This is, of course, providing the Static Fire test proceeds without incident.

Starship SN9 is all-but ready to be tapped in, hopefully after SN8 safely concludes her test flight – as much as expectations should be set accordingly when expecting SN8 to achieve numerous first-time test objectives successfully.

It is more likely SN9 will benefit from the data gained from SN8’s flight, with the goal of achieving additional milestones during a likely-repeat test flight.

Currently housed in the High Bay, SN9 has gained her aero surfaces and appears to be ready to receive a nosecone. There is room in the lofty High Bay – when compared to the Mid Bay – to conduct such a mating.

Providing rollout can be achieved in a full stack configuration; this refined flow would shave days off the pad flow compared to SN8’s nosecone mate at the launch site.

The Mid Bay is back to two Starship flows, with SN10 heading toward aero surface installation and SN11 sections being hoisted into place in the adjacent bay.

For those keeping counts:

For SN11, the Common Dome section – with its Methane Header Tank visible – was stacked on to the LOX tank sections. Fast progress is being made on SN11, with the LOX Downcomer now installed in its forward dome section, ahead of joining its section comrades in the Mid Bay.

In addition, dome sections for Starship SN12 have already been spotted out in the open. Stacking of the Thrust Section took place this past week.

Inside the big tents, a family of nosecones is being prepared, with hinge attachment points being installed – thus confirming SpaceX Boca Chica has moved away from creating a family of pathfinder test articles and now only producing flight nosecones.

Back in the High Bay, and now keeping SN9 company, are the BN1 (which is now the confirmed name, per labels on sections) Super Heavy Prototype’s opening sections.

This beast of a vehicle will involve the mating of numerous sections before receiving two or four Raptor engines for its own test flight. As of the last reference, Elon Musk noted this Super Heavy would actually follow the same test path as Starship SN5 and SN6, hopping 150 meters in proof of controllability testing.

This will involve the new Orbital Launch Mount under construction next door to the Starship pad before this super-tall rocket plants its feet into the landing pad located in an area between the two launch sites.

It remains unknown as to when BN1 will conduct this test. However, the first sign of stacking – spotted by Mary – has taken place, involving two lower LOX tank sections, with numerous sections waiting their turn for being lifted into the High Bay.

Regardless of how SN8 fares during her test flight, 2021 promises to be a banner year for Starship testing, with an array of Starships and at least one prototype Super Heavy all lining up for their own test flights.

All photos via Mary (@bocachicagal)