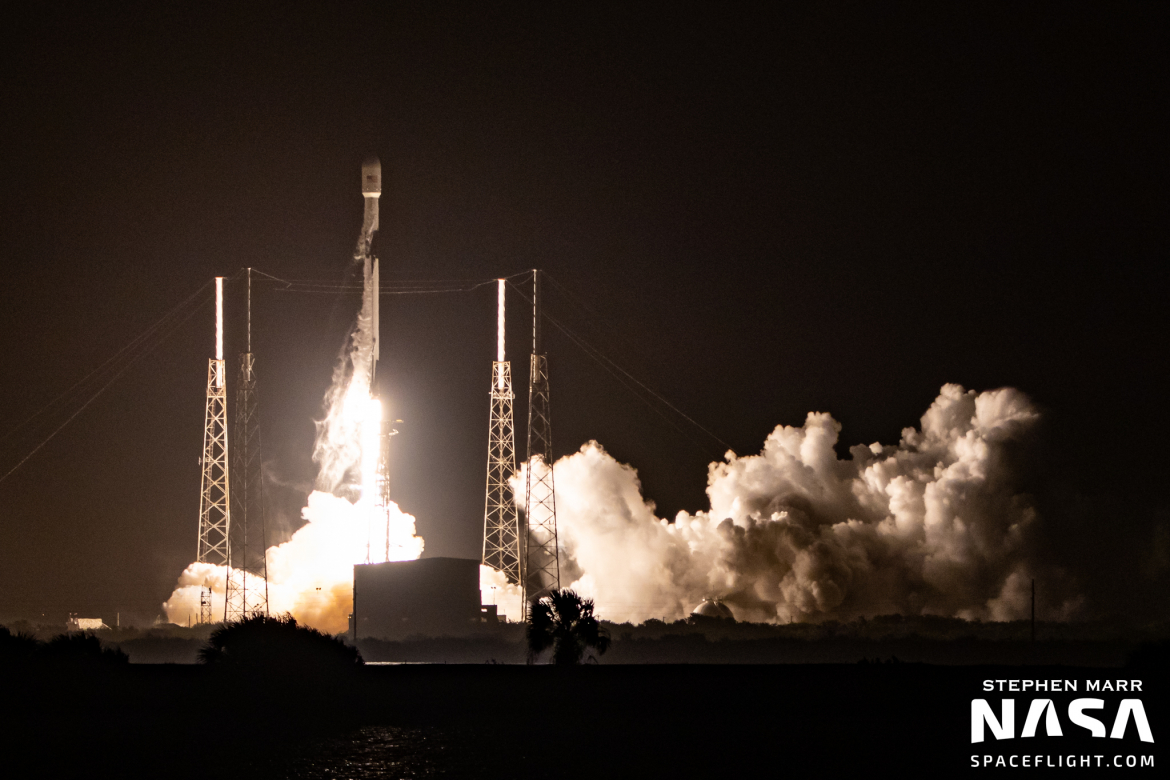 The launch followed a scrub on 2 October, when Falcon 9 aborted two seconds before liftoff. The resulting investigation identified an issue within the gas generators on some first stage engines and prompted several engine swaps across the Falcon 9 fleet and affected multiple upcoming launches.

The mission launched from Space Launch Complex 40 (SLC-40) at the Cape Canaveral Air Force Station in Florida. Following the initial ascent, the Falcon 9 first stage landed on Of Course I Still Love You, one of SpaceX’s Autonomous Spaceport Drone Ships stationed in the Atlantic Ocean.

The drone ship departed Port Canaveral on 31 October 31 and was stationed 635 kilometers downrange, to the northeast of Florida.

The eastern range is coordinating both this launch and an Atlas V with the NROL-101 mission. NROL-101 scrubbed on Wednesday due to an issue with ground system liquid oxygen valves. That launch is now scheduled for Sunday.

The first stage supporting this mission is B1062, a brand new Falcon 9 core. The stage originally completed a successful static fire test at SLC-40 on 25 September ahead of the aborted launch attempt on 2 October. SpaceX CEO Elon Musk described the cause of the T- 2 second abort as an “unexpected rise in the turbomachinery gas generator.”

SpaceX’s investigation revealed an issue affecting multiple first stage engines on several new Falcon 9 boosters. Other boosters affected included B1061, the first stage supporting the upcoming Crew-1 mission, and B1063, which has been assigned to launch the Sentinel-6 satellite from Vandenberg, California. NASA was heavily involved in the investigation as the launch customer for both Crew-1 and Sentinel-6, as well as the upcoming CRS-21 mission.

Hans Koenigsmann, Vice President of Build and Flight Reliability for SpaceX, described the issue in further detail during a Crew-1 mission briefing. During the abort on 2 October, an early start occurred on two of the Merlin 1D engines on the first stage. An automatic abort prevented a hard start, which could have damaged the engines.

Both engines were shipped to SpaceX’s facility in McGregor, Texas for testing. The investigation found that a relief valve was being blocked by leftover masking material from the engine’s production process. Koenigsmann described the substance as “sort of like nail polish.” The issue affects only some of the recently produced Merlin engines.

As a result of the investigation, the two engines on B1062 which encountered the issue during the abort have been replaced for the next launch attempt. An engine was also replaced on B1063, as well as two engines on B1061. A thorough data review after the GPS-III-SV04 launch will feed into the Flight Readiness Review for the upcoming Crew-1 mission, and other missions to follow.

The #GPSIII satellite is making the journey back to LC-40 to be mated with Falcon 9 ahead of this week's launch attempt. #SpaceX pic.twitter.com/VKYq1c0Hzy

Booster B1062 completed another static fire at SLC-40 to validate the fix on 31 October.

Previous missions for the US Department of Defense, including the GPS-III-SV04 mission, have been required to launch on new Falcon 9 boosters. Now, the United States Air Force has approved the use of reused boosters on the GPS-III-SV05 and SV06 launches, the first SpaceX national security launches which will be permitted to use flight proven stages. The Department of Defense was the last major SpaceX customer requiring new boosters prior to this approval, after NASA cleared Crew Dragon missions to launch on reused Falcon 9s. This change by the US military could open the door for similar plans for other SpaceX national security missions.

When SpaceX launched their first GPS III mission, the launch customer requested that Falcon 9 fly in an expendable configuration, without landing legs or grid fins. After the successful launch, without any recovery attempt of the first stage, SpaceX was approved to attempt stage one recoveries on future GPS launches. Falcon 9 B1060 was successfully recovered aboard Just Read the Instructions after launching GPS-III-SV03.

The same drone ship departed Port Canaveral on September 26 in support of the launch of SV04. At launch, Just Read the Instructions will be stationed 635 kilometers downrange, to the northeast of Cape Canaveral. 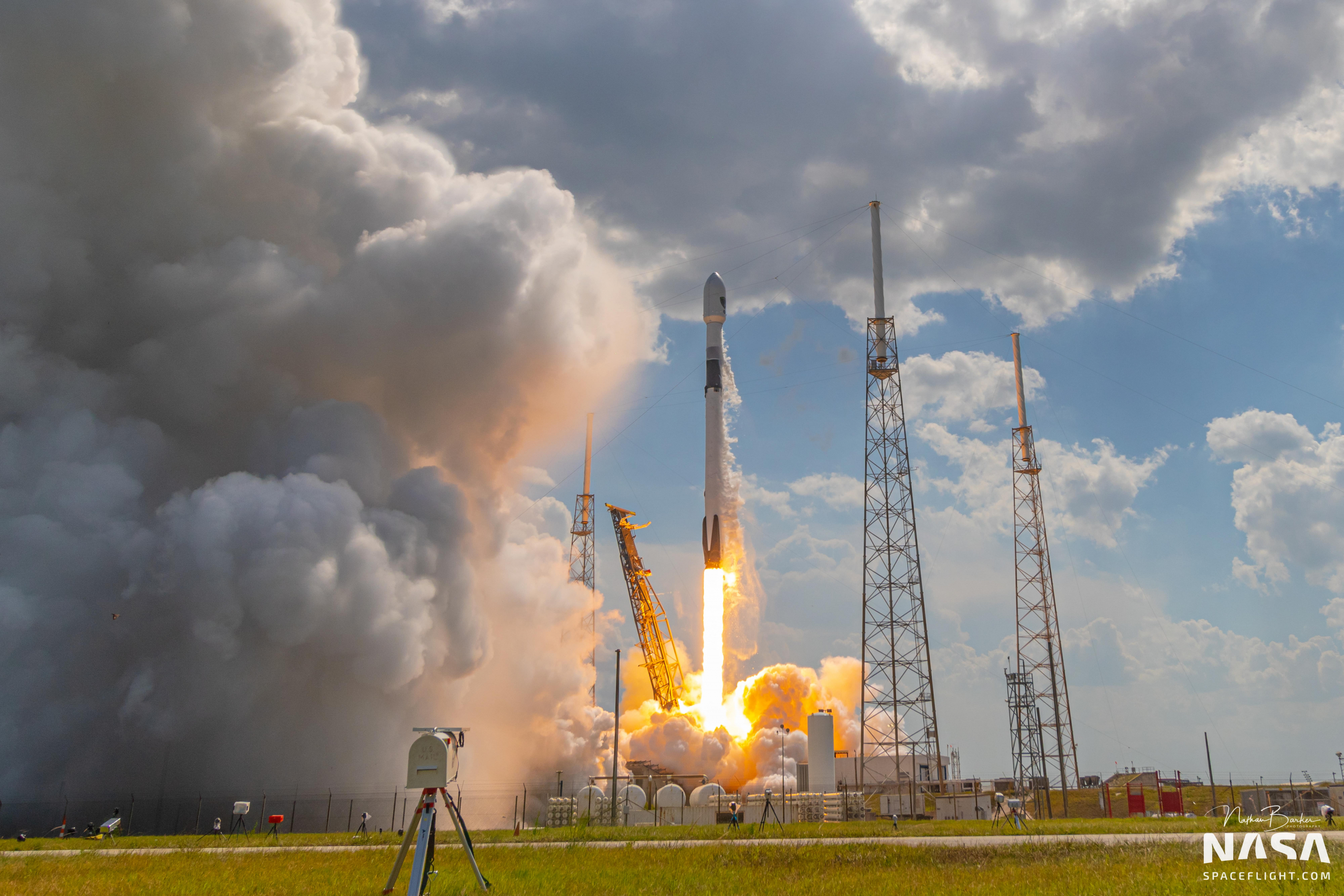 Falcon 9 launches the GPS-III-SV03 satellite in June 2020. The gray paint band on the second stage is visible. – via Nathan Barker for NSF/L2

On the GPS-III-SV03 launch, Falcon 9’s second stage featured a gray band of paint. The dark band, different from the usual completely white stage, improves the thermal conditions within the propellant tanks during long duration missions, such as GPS launches to Medium Earth Orbit. This gray stripe was also seen being tested on the CRS-18 Cargo Dragon mission. The second stage launching GPS-III-SV04, however, does not have the paint band, suggesting that SpaceX was testing its effects on prior missions, rather than implementing it on all GPS launches.

Falcon 9 deployed the spacecraft into an approximately 1,200 by 20,000 kilometer transfer orbit at an inclination of 55 degrees. The satellite will then use its own propulsion to maneuver into a circular orbit at 20,200 kilometers in altitude. This is the operational orbit where the GPS III satellites will carry out their missions.

The GPS-III-SV04 spacecraft arrived or pre-launch processing at Cape Canaveral aboard a US Air Force C-17 cargo aircraft on 14 July. The satellite was built by Lockheed Martin, based on the A2100M satellite bus. Ten of the GPS III satellites have been ordered to date. 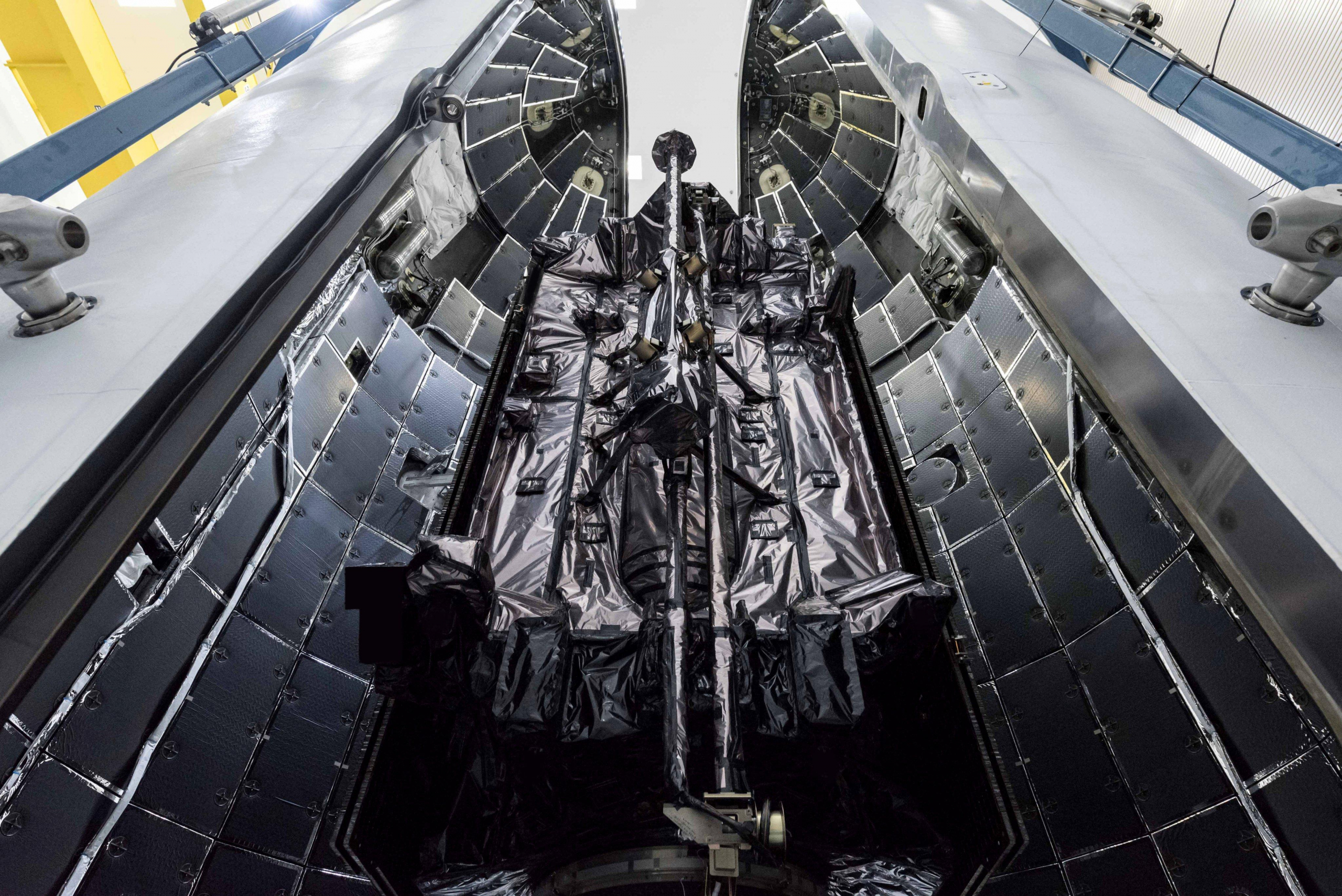 Each GPS III satellite carries a navigation payload provided by L3Harris Technologies. The Block III series of GPS navigation satellites are replacing the Block II series, enabling more accurate signals, increased jamming resistance, and extended spacecraft lifespan. SV04 is the fourth GPS III satellite to launch, and the third to launch on a Falcon 9, excluding one spacecraft which launched on the final flight of the Delta IV Medium rocket.

The Falcon 9 flight profile to Medium Earth Orbit included two upper stage burns. After stage separation, as the first stage returned to Earth for landing, the second stage performed the first burn in order to achieve orbit. During this burn, the payload fairing separated, and the two halves descended towards the SpaceX recovery vessels for a potential recovery attempt about 45 minutes after launch.

After SECO-1, the end of the first upper stage burn, the stage and GPS satellite coasted for approximately 55 minutes. Then, the second upper stage burn began, lasting just 45 seconds. After a 25 minute coast phase, the GPS-III-SV04 satellite was deployed.

As Starships line up, Musk calibrates expectations for SN8 test