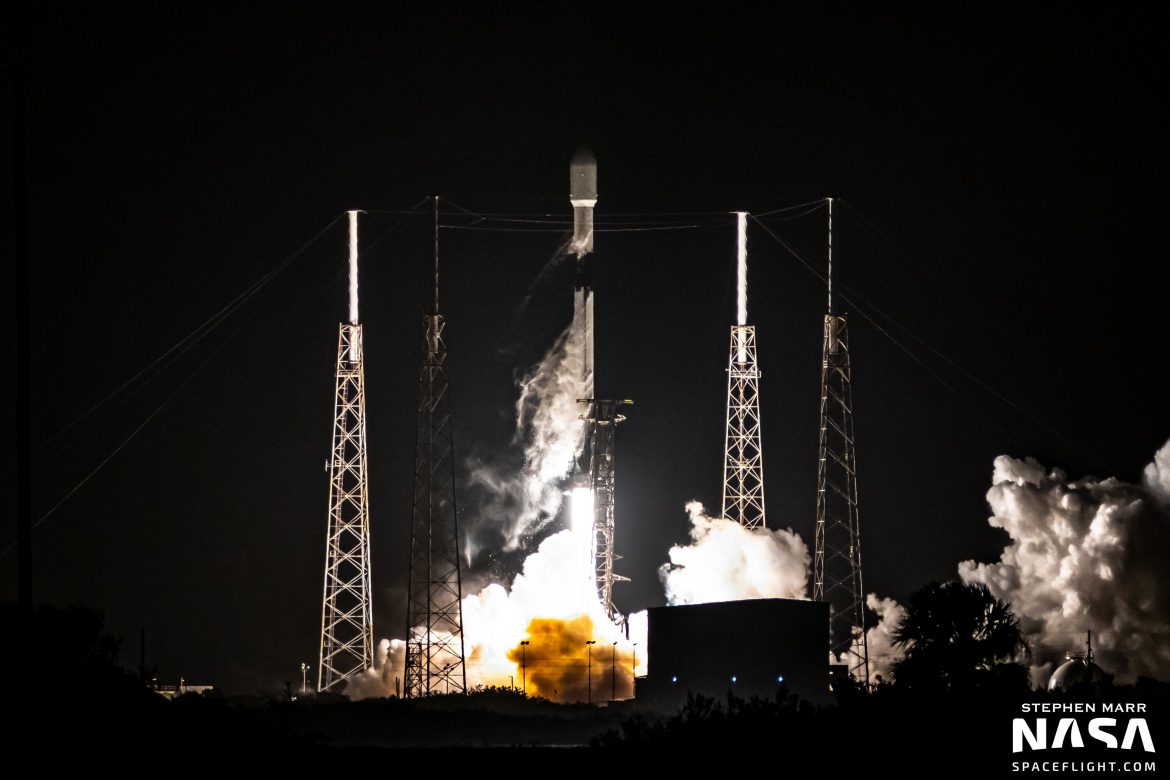 B1049 first launched in September 2018, lifting the Canadian Telstar 18 Vantage telecommunications satellite into a geostationary orbit. Just four months later, the booster was reused to complete the Iridium NEXT satellite constellation, launching the final ten satellites into orbit from Vandenberg Air Force Base in California.

Since then, B1049 has been completely dedicated to building SpaceX’s Starlink constellation, having launched starlink V0.9 in May 2019, SpaceX’s first and only batch of 60 V0.9 Starlink test satellites.

With the launch of Starlink V1.0 L15, B1049 has launched four batches of operational Starlink satellites and will have contributed 238 operational satellites to the constellation.

On B1049’s previous flight, Starlink V1.0 L10, the stage set the record for having flown the most flights of any Falcon 9 booster (or orbital rocket booster) at six individual flights; on flight L15, it broke its own record.

The launch of Starlink V1.0 L15 also marked another milestone for the Falcon 9: its 100th flight — an accomplishment achieved in just 10 and a half years with a surge of 71 launches in the last three years alone and this year’s commencement of human launch operations with Demo-2 in May and Crew-1 in November.

B1049 was rolled out and lifted into a vertical position at Space Launch Complex 40 (SLC-40) on 19 November for a launch on 21 November.

Like most Falcon 9 missions, B1049 performed a static fire test, being held down at the launch pad and igniting its nine Merlin 1D engines for a few seconds to make sure all was in working order.

The test was originally scheduled for approximately 01:30 EST (06:30 UTC) on 20 November, although the firing was aborted due to high winds at the launch pad.  The test proceeded successfully at approximately 16:00 EST (21:00 UTC) on 21 November, clearing the Falcon 9 for flight.

Just prior to the start of propellant loading on Sunday, 22 November, however, a hold was called due to “mission assurance” — pointing to an issue with the rocket.

An initial backup attempt was scheduled for the 23rd but was called off before countdown operations began due to unacceptable weather from a passing frontal system at the downrange recovery zone 635 km northeast of the Cape where the first stage would land on the drone ship Of Course I Still Love You.

After a short vertical climb, Falcon 9 pitched over and head out on an azimuth — heading — to place itself into a 53 degree inclination orbit.

Once B1049 completed its 2 minute 32 second burn, the second stage separated and ignited its Merlin Vac engine, bringing the Starlink payload into orbit.

After stage separation, the first stage booster oriented itself for the three-engine Entry Burn to slow itself down and alter course more towards the drone ship.  That burn completed at T+7 minutes 03 seconds.

A single-engine Landing Burn then slowed the booster and fine-tuned its trajectory towards the waiting Of Course I Still Love You rocket-catching drone ship 634 km northeast of the launch pad (supported by GO Quest).

Falcon 9 B1049.7 launches and LANDS for a record seventh time. pic.twitter.com/DFGHMzhosI

The two payload fairing halves likewise parachuted down for recovery.  The vessels Ms. Chief and GO Searcher assisted in that endeavor for a water recovery.

With a successful landing, the booster will now be brought back to Port Canaveral ahead of its 8th flight — which will all but certainly be another Starlink flight given Elon Musk’s comments on “fleet leader boosters” being used for internal missions (the only ones of which at present are the Starlinks).

The approximately 260 kg spacecraft are powered by a single Krypton ion thruster, which allows them to maneuver in orbit efficiently and quickly de-orbit once they reach the end of their lives. Most Starlink spacecraft in the initial deployment are planned to orbit at approximately 550 km above Earth’s surface and can passively de-orbit over the course of 1-2 years if their propulsion system should become unusable.

Starlink has been rolling out their “Better Than Nothing Beta” test of Starlink service to investors and those who signed up via the company’s website.

Last week, after those initial offerings and regulatory approval in Canada, Starlink “Better Than Nothing Beta” underwent a limited public release in both the northern U.S. and Canada.

With each mission, the coverage ability for Starlink moves farther south in terms of latitude. Previously, Starlink and SpaceX have said approximately 1,500 satellites needed to be launched to support initial, full coverage. With the launch of mission V1.0 L15, SpaceX will have put 893 V1.0 Starlink satellites into orbit, well over half of the initial number needed. 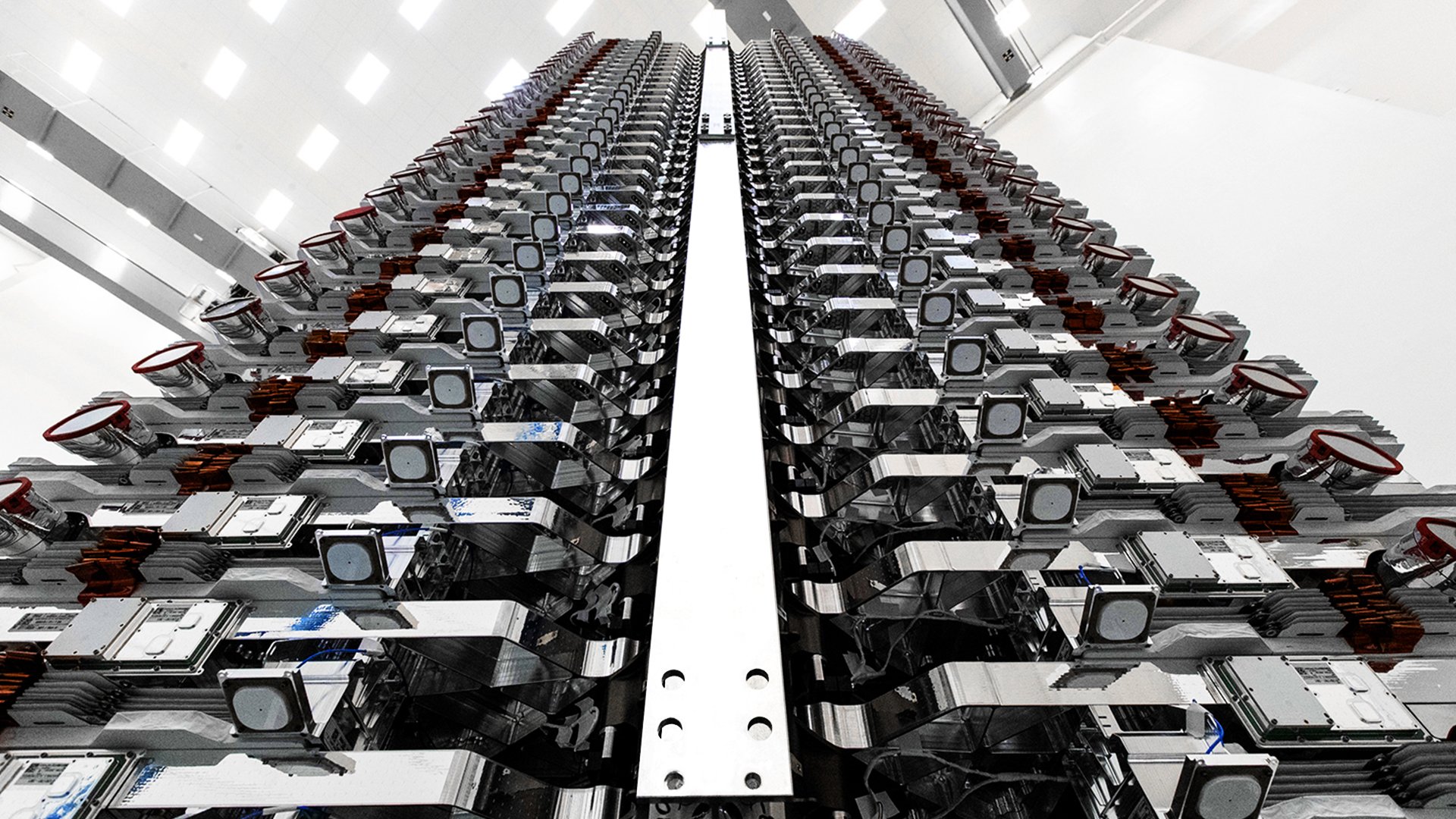 A stack of 60 Starlink satellites prior to being encapsulated in their launch fairing. (Credit: SpaceX)

After the initial batch of Starlinks are in orbit, the company will focus their launches on both maintaining the initial constellation and starting to build out the other orbital shells to increase Starlink’s reach. A fleet of up to 42,000 spacecraft is possible based on current FCC (Federal Communications Commissions) licenses already approved.

Exactly how many satellites will ultimately be used for operation of the network is not known, with a large portion of those plans dependent on actual user demand for the system, which has already demonstrated its ability to bring reliable, needed communications to rural areas battling natural disasters as well as remote First Nations and Native American lands in the U.S. and Canada.

Those types of services not only aid first responders and emergency forces in the protection of lives, but also brings to native lands a connectivity that dramatically increases access to healthcare and information — among many other benefits.