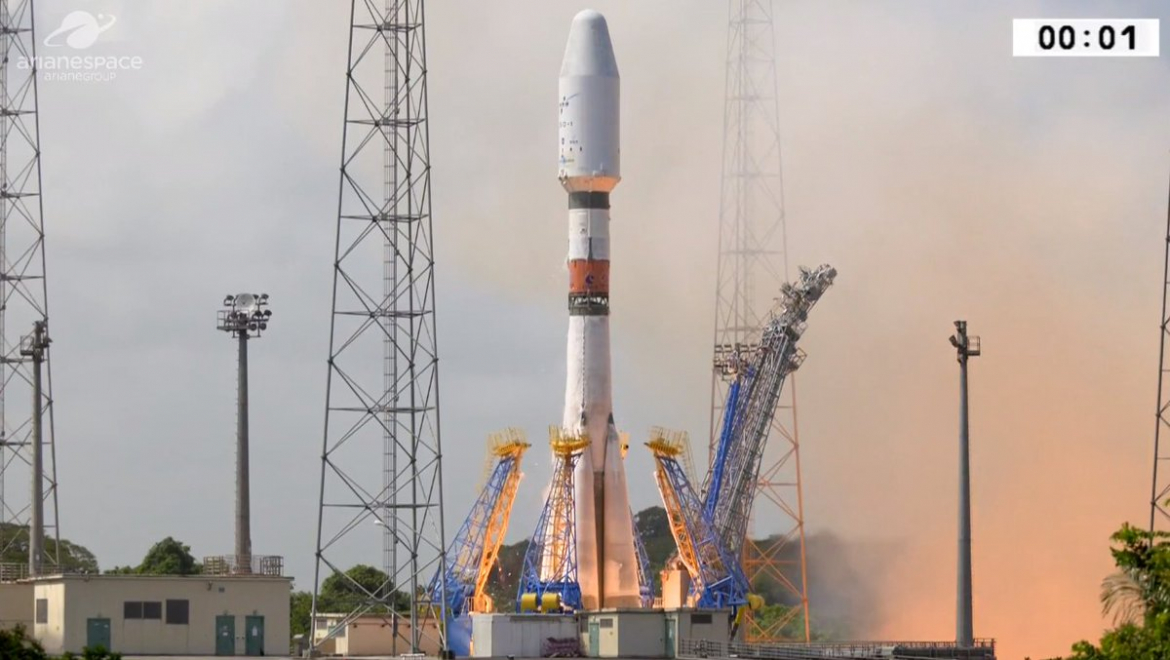 The 114th and final orbital launch of 2020 saw a Soyuz ST-A rocket loft the CSO-2 Earth observation satellite for the French Ministry of Defence.

Liftoff occurred at 16:42:07 UTC (11:42:07 EST) on 29 December from the ELS (Ensemble de Lancement Soyouz) launchpad at the Guiana Space Centre in French Guiana, an overseas department of France.

The only passenger on the 10th and final flight for Arianespace this year — the fifth using the Soyuz — is the Composante Spatiale Optique -2 (CSO-2) satellite for the French Ministry of Defence.

Built by Airbus Defence and Space, with the French arm of Thales Alenia Space providing the optical imaging instrument for the satellite, it will join CSO-1 as the second of three planned CSO satellites that are succeeding the Helios 1 and 2 military observation systems.

CSO-1 was launched on 19 December 2018, likewise on a Soyuz ST-A/Fregat-M rocket.  CSO-3 will differ greatly from its predecessors in launch vehicles as it is scheduled to be taken to orbit on the much larger and upcoming Ariane 6 rocket.

The third part of the trio was to launch in October 2021, but with Ariane 6’s debut pushed into at least the second quarter of 2022, CSO-3’s launch date is nebulous at this time.

In so doing, the trio of satellites will meet their mission objectives to:

With a total launch mass of 3,562 kg and a design life of 10 years, CSO-2 will operate in an orbit inclined 97.3 degrees to the equator and will use a variety of imaging techniques, including visual and infrared, to observe Earth’s surface day or night.

While designed, built, and operated by France, access to the CSO systems and information are accessible to European partners, with Germany, Sweden, and Belgium having already joined and an agreement with Italy forthcoming.

Like many other missions, CSO-2 faced delays this year due to COVID-19 and the vital need to keep people safe and unharmed.

The Soyuz ST-A for the CSO-2 mission after rollout to the ELS launch pad and prior to payload integration. (Credit: Arianespace)

After arriving at the launch site on 27 February 2020, all work on the satellite and mission stopped on 17 March and did not resume until 14 September when integration of the Soyuz rocket began.

Work on the satellite did not begin again until 17 November.  CSO-2 was integrated on top of the Fregat-M upper stage on 18 December, with the duo then encapsulated inside the payload fairing on 21 and 22 December.

Launching the CSO-2 satellite into its proper orbit required pinpoint precision and a single second, instantaneous launch window at 16:42:07 UTC.

To perform the task based on the satellite’s mass, Arianespace, in cooperation with the Russian space agency, Roscosmos, contracted a Soyuz 2.1a rocket with a Fregat-M upper stage.

As part of the interagency agreement, the Soyuz 2.1a was heavily modified with several European upgrades, including a European Safeguard Kit to shut the engines off (a flight termination system) in the event of an anomaly; pyrotechnic engine ignition sources instead of chemical; European payload adapters; increased air conditioning and environmental protective measures to prevent large ice build-ups and moisture intrusion due to the tropical location of the launch site; and vertical payload integration.

With these modifications, the Soyuz 2.1a is recategorized as Soyuz ST-A.

The mission timeline for the CSO-2 launch. (Credit: Arianespace)

The first part of the two-step ignition process verified proper combustion was occurring within the engines from their pyrotechnic sources, with a preliminary thrust level reached at T-14 seconds.

Just 4 seconds prior to liftoff, the full ignition sequence was commanded, with the Soyuz reaching liftoff thrust one second before it was released from the launchpad.

During the launch sequence, after the boosters were jettisoned and the payload fairings were discarded, the Blok-I stage, sitting atop the Blok-A core, ignited its RD-0110 engine two seconds prior to the Blok-A stage shutting down and separating.

This maneuver is known as hot staging and allows the G forces acting upon the Blok-I stage to keep its propellants pushed back and settled in their tanks, thus allowing a stable RD-0110 ignition.

Using a hot staging technique like this eliminates the added complexity for ullage, or push, motors that would otherwise be needed to perform the same operation if the Blok-A stage were allowed to shut down and separate prior to ignition of the Blok-I.

After successfully delivering the CSO-2 satellite into the proper orbit, the Fregat-M upper stage will continue its mission, performing both a third and fourth sequence of burns to deorbit itself and prevent itself from becoming a derelict piece of space trash/debris.

Year in Review: Mars missions, Lunar Samples, Crew launched from the US, and Starlink