Arianespace has used — with Russia’s support — a Soyuz ST-A rocket to launch a joint military and civilian Earth imaging satellite for the United Arab Emirates Armed Forces from the Guiana Space Centre near Kourou, French Guiana.

Liftoff of the Falcon Eye 2 satellite occurred at 20:33:28 EST on Tuesday, 1 December (01:33:28 UTC on Wednesday, 2 December) to ensure the satellite reached the proper sun-synchronous orbit at a mean altitude of 611 km.

The mission was originally scheduled to launch on a Vega rocket, like its predecessor — Falcon Eye 1 — did in July 2019.  That mission ended abruptly 14 seconds after stage two ignition when the Vega rocket suffered the first of its two failures to-date.

Shortly after separation of the launcher’s first and second solid propellant stages, the forward dome on the Z23 motor (second stage) suffered a “thermo-structural failure” leading to a “violent event” that “led to a breakup of the launcher” — an engineering way of saying that the thermal protection system at the top of the Z23 stage failed, causing the destruction of the rocket and payload.

Following the failure, the United Arab Emirates (UAE) Armed Forces asked for Falcon Eye 2’s launch to be changed to a Soyuz rocket with a Fregat-M upper stage so as not to launch on Vega again and allow for a smoother and more timely launch not subject to Vega’s return timeline.

Launch was rescheduled for 20 February 2020 before moving to 5 March.  That day, teams found an issue with “one of the liquid propellant small thrust engines” on the Fregat-M upper stage of the Soyuz during day-of-launch checkouts.  Later reports indicated the issue was a leak of oxidizer.

#Arianespace’s Flight #VS24 w/ #Soyuz will lift off TODAY from the Spaceport in French Guiana. Check your local time and follow along online! pic.twitter.com/rk5NemO8DC

Initially a “one day” delay, the issue quickly pushed the launch back to 10 April within hours of its discovery as the entire Fregat-M upper stage needed to be replaced — with the stage itself going back to Russia.

At first, Russia offered a software solution to the issue, but Arianespace, the UAE Armed Forces, and France (French organizations own slightly more than 64% of Arianespace) opted to replace the stage instead.

With COVID-19 cases growing, the French government initiated public health measures and lockdowns — with all non-essential work stopping throughout the country, including its overseas departments of which French Guiana is one.

With the space centre closed, the mission was delayed to a preliminary target of mid-September should COVID-19 restrictions allow.

On 30 May, an alarm at the storage site of the Fregat-M upper stage alerted personnel of a potential, and highly toxic, nitrogen tetroxide leak.  A team was dispatched from Russia; no word of whether the alarm was false or true was given.

Days later, the flight was pushed back to no earlier than 17 October.

By late-September, an additional issue with the Fregat-M upper stage was discovered and the launch postponed to 3 November, which itself was later moved back to the “end of November”.

A launch attempt for Saturday, 28 November local time was on track, with the Soyuz rolling to the pad on Tuesday, 24 November before a Launch Readiness Review cleared the mission for liftoff. 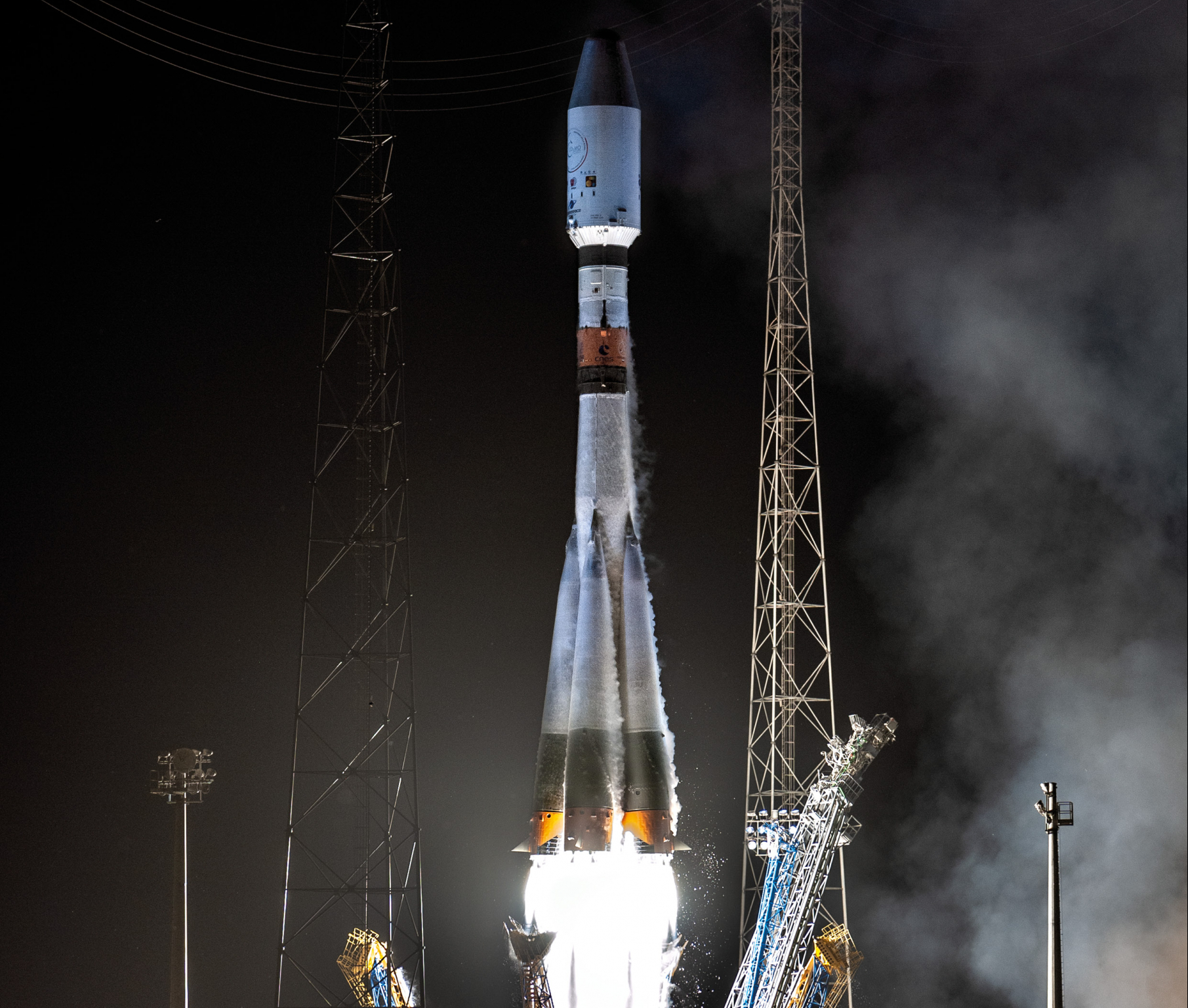 Soyuz lifts off from the Guiana Space Centre. (Credit: Arianespace)

That attempt was stopped hours before liftoff, with indications the delay was caused by weather.  Launch was quickly reset for Sunday, 29 November at exactly 20:33:28 EST.  That attempt was likewise scrubbed for weather — lightning — at T-7 minutes.

An attempt the following day was scrubbed just two minutes before liftoff when telemetry could not be properly received from the rocket at the launch site.

The Soyuz ST-A rocket is a baseline Soyuz 2.1a launcher that incorporates several European modifications — including but not limited to combustion chamber pyrotechnics, a European payload adaptor, and a European flight termination system.

A Blok-I stage (stage 3 to Arianespace) sits atop the central stage.  The Fregat-M upper stage and payload ride enclosed in the payload fairing.

The engine ignition sequence began at T-16 seconds, when European pyrotechnic charges fired inside all 32 combustion chambers — 20 total for the five main engines plus 12 vernier (steering) engines that all have to be lit for liftoff.

After the ignition process began, all 32 combustion chambers reached preliminary thrust levels by T-14 seconds, at which point the critical process of confirming ignition inside every single chamber occurred.

At liftoff, the Soyuz ST-A performed a pitch and roll program to align itself for a flight just west of due north.  This placed the payload into its intended sun-synchronous orbit.

Flight events were as follows:

Falcon Eye 2, was released into a sun-synchronous orbit with a mean altitude of 611 km.  With a mass of 1,190 kg, the joint military-civilian Earth observation and reconnaissance satellite was originally designed to work in concert with Falcon Eye 1 and carries the same High-Resolution Imager system, capable of resolving objects of 70 cm across a 20 km field of view.

A network of ground stations will participate in initial commissioning of the satellite and serve as a downlink relay during its planned five year mission, which will be managed by Emirati operations.

The satellite will serve dual roles: providing support for the UAE Armed forces and obtaining commercial images for sale.

Lead image: A Soyuz on the launch pad at the Guiana Space Centre. Credit: Arianespace