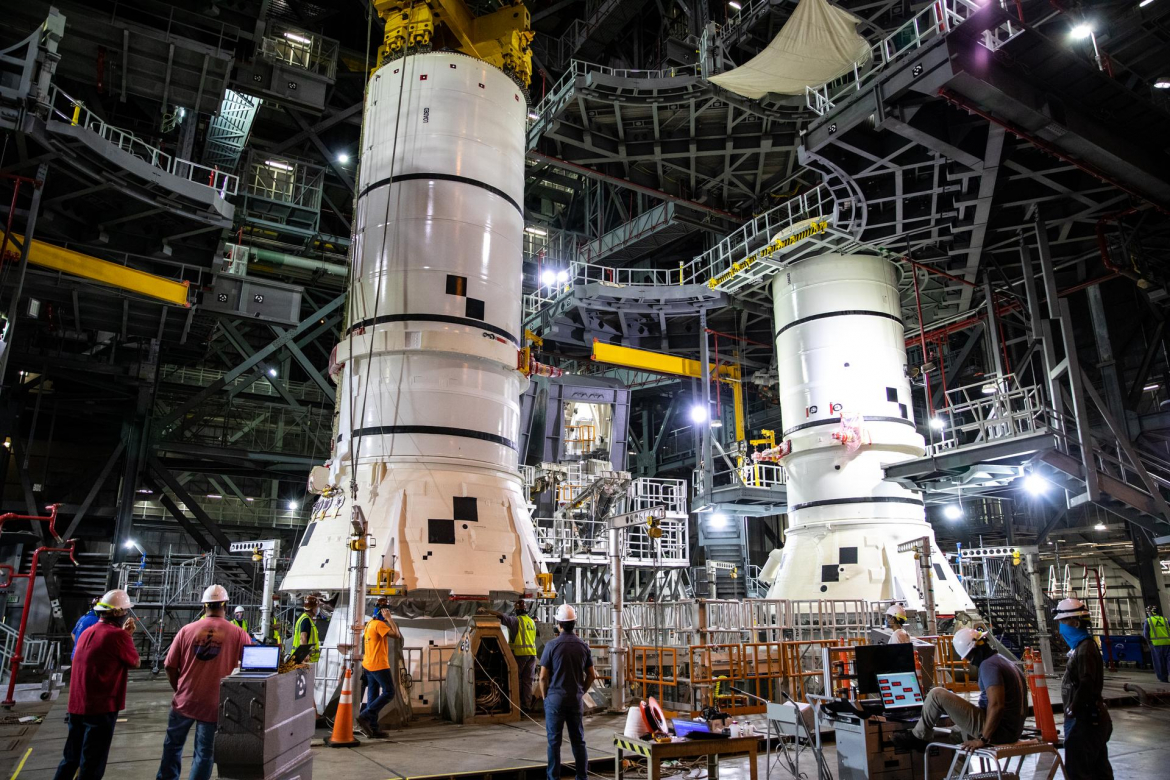 With the field joint mated, the next step is to secure the joint with pins all the way around the circumference of the case. “After that’s done, they break down their enclosure and start installing pins around the whole circularity of the segment,” Tormoen explained.

“They then [install] a pin-band retainer, it’s called; basically it’s a glorified band clamp that you can see on some big shipping materials. It goes around all those pins keeping the pins in during launch and operation.”

“And so that’s clamped, and then grease is applied — by the way, this whole time you know we can’t have bare metal so we’re applying grease and making sure corrosion is not happening anywhere,” he added. “Then we are going into leak checks.”

“We’re filling in holes like the leak port, we’re filling in with grease, and then we’re applying the cork which is a TPS ablative to handle the heat, the paint, and so forth. We could just keep doing the TPS closeouts and then proceed to the next joint, but what we’ll most likely do is proceed to the next joint once the [current] joint is mated and then TPS closeouts can be done while they’re doing the preps for the next segment.”

All three Exploration Systems Development division programs — EGS, Orion, and SLS — are still in phases of development ahead of this first integrated Artemis 1 launch, and the center of the launch vehicle, the SLS Core Stage, remains at the Stennis Space Center in Mississippi to complete its design verification test campaign called the Green Run. 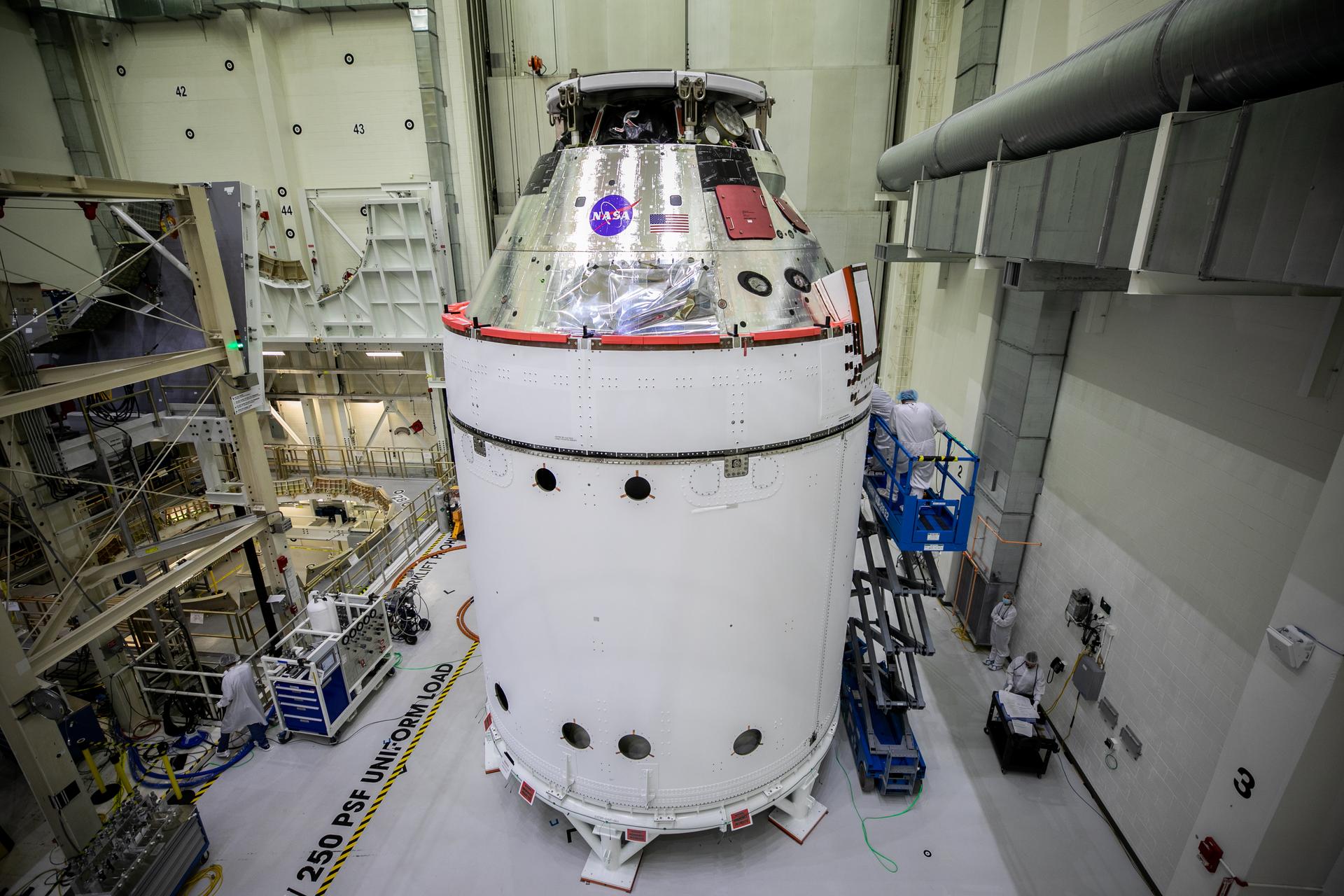 (Photo Caption: The Artemis 1 Orion in the Armstrong Operations and Checkout Building on October 28 after the launch fairing panels were installed that protect the Service Module and Spacecraft Adapter during the early minutes of ascent. An issue was recently discovered with the health of one of the avionics boxes in the Crew Module Adapter, which is delaying the transfer of the spacecraft to begin its launch processing.)

The final two tests in the eight-test campaign are the biggest ones, the Wet Dress Rehearsal followed by a full-duration, eight-minute Hot-Fire of the stage. The tests are scheduled to finally occur this month, with the main tanking and countdown demonstration day of the Wet Dress Rehearsal scheduled for December 7. It will be the first time a Core Stage has ever been loaded with cryogenic liquid propellant, and there is still some uncertainty about the timing and the results of the test.

The schedule of the Core Stage has been the critical path to reaching launch readiness for Artemis 1 for a couple of years, but some new uncertainty has developed with the report of an issue with one of the Artemis 1 Orion spacecraft’s avionics boxes. The Verge reported on November 30 an issue with one of the Power and Data Unit (PDU) avionics boxes in the spacecraft’s Crew Module Adapter; there are eight PDUs in different parts of the spacecraft, with the problem reportedly in one of two PDUs in the CMA, either the S1 or S2 unit.

The Artemis 1 Orion Crew and Service Module (CSM) spacecraft, along with the Spacecraft Adapter and Service Module launch fairing panels, was scheduled to be officially turned over from prime contractor Lockheed Martin to EGS during a December 5 ceremony and then transported on December 7 from the Armstrong Operations and Checkout building where it was assembled to the Multi-Payload Processing Facility to begin launch processing.

According to a NASA blog post later on November 30, that transport date is delayed and under review, and Orion’s overall launch integration schedule for Artemis 1 is now uncertain.  Late word now suggests that NASA and Lockheed Martin may be getting comfortable with flying the PDU “as-is” and possibly pressing ahead with the official turnover to EGS in a few weeks.

Depending on the final decision the Orion PDU issue could play another role in the forward schedule, along with the Core Stage Green Run, for stacking the rest of the booster segments.  In the summer, when the SRB motor segments were delivered to KSC, stacking the SLS Boosters on the ML was expected to begin after the Core Stage Hot-Fire test at Stennis; at that point, Green Run testing had resumed after a two-month standdown due to COVID-19.

A long hurricane season for Louisiana was followed by technical issues, and the Hot-Fire test is now scheduled for Christmas week.  Booster stacking was held up to stay in sync with the Core Stage schedule in part because once the segments are stacked on top of one another, NASA has about a year to launch before they would need to be destacked and serviced. 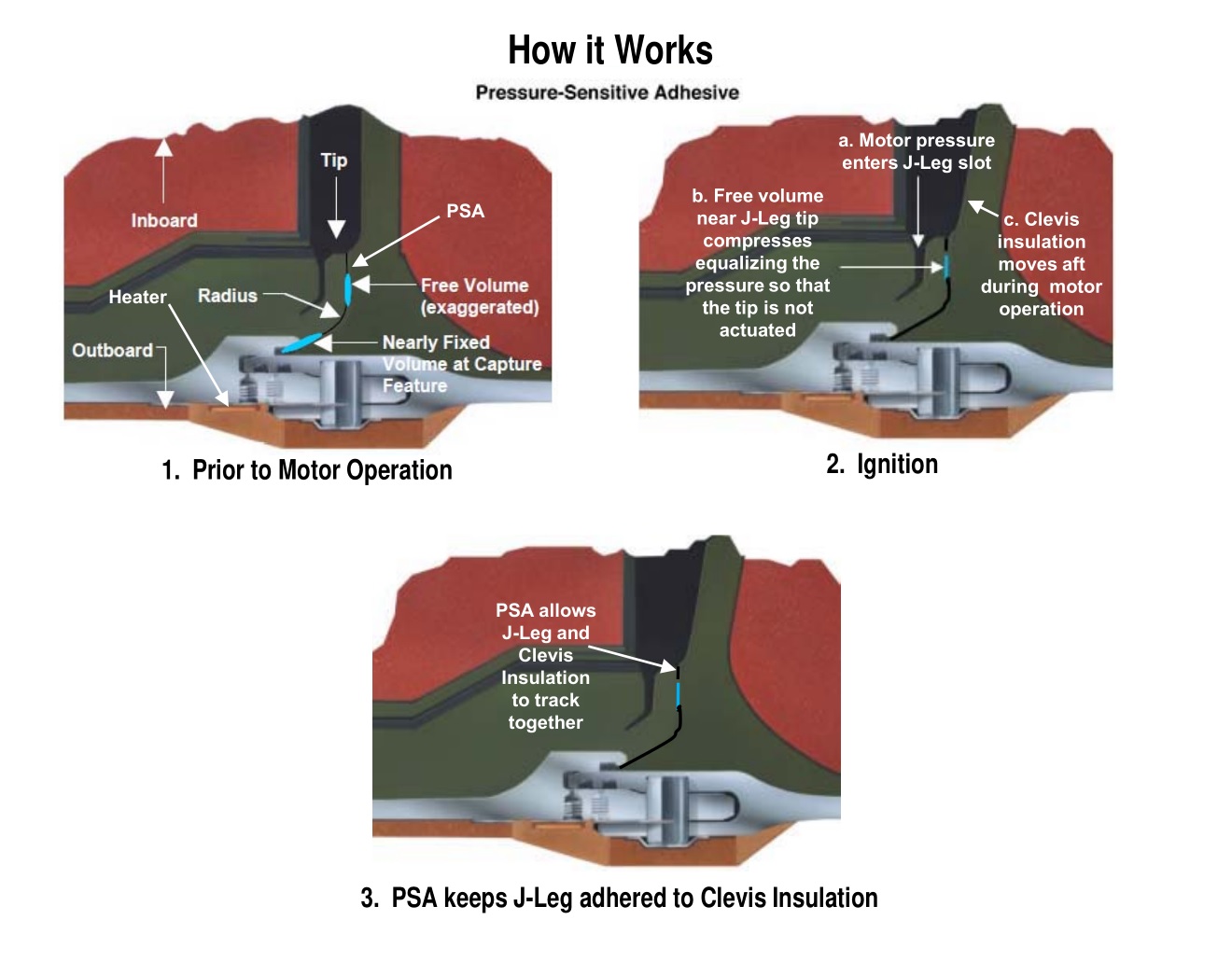 (Photo Caption: A composite graphic, rotated sideways, of the Space Shuttle solid rocket motor case-to-case field joint showing the operation of a J-leg feature in the insulation, which includes pressure sensitive adhesive (PSA). SLS inherits this design in using leftover Shuttle SRM cases. Once the tang and clevis for two segments are mated, the J-leg has a 12-month stack life.)

The clock doesn’t start until the first field joint is mated, which won’t happen until the next segment, the left aft center, is mated to corresponding left aft booster assembly already on the ML and is related to the function of a J-leg in the insulation at the field joint. “The mate pushes that J-leg together and it has a inhibiting function as a first barrier to impingement on the seal,” Tormoen said. “Northrop Grumman has done a lot of work, and they can talk for days on this, but basically making sure that J-leg has that springing action that it’s expected to have is directly related to the stack life.”

“EGS has been tasked to take some early on measurements of that J-leg to make sure we understand the condition of that J-leg before the mate is completed. As we put these segments together, we’ll have a good understanding of how they’re looking.”

EGS budgeted one month to stack the boosters, with an extra month worth of contingency time to deal with any issues that might come up during the work. It was also expected that the forward assemblies that top out the boosters would be transported from the Booster Fabrication Facility (BFF) to the VAB when stacking started; given the uncertainty and fluidity of the schedules for the other Artemis 1 elements, those final two booster pieces to be assembled will stay in the BFF for now, and operations management is ready to adapt the booster stacking schedule to real-time developments.

“EGS Ops Management is going to keep a close eye on the Core Stage Wet Dress and Hot-Fire,” Tormoen said. “They will make sure that they’re staying on track, and we’re making the decisions on stacking that make sense. But as far as waiting for Hot-Fire, we’re not going to wait for Hot-Fire, per se.”

“But if they come across something that is a concern or a challenge during Wet Dress, we’ll definitely make the right call to maximize our 12-month stack [life].” At the time of the interview on December 1, Tormoen said that the process of stacking the next segment, the left-hand aft center segment, would begin on December 7.

For now, the forward assemblies will stay in the BFF.  “[The forward assemblies] are ready to go ,and they will stay there until they’re needed,” Tormoen said. “They’re over in the BFF, they are being [kept] in a basically storage conditioning, both humidity and temperature, and they’re wrapped up to protect FOD and any other contamination, ready to be delivered.”

When stacked on top, the two will complete assembly of the boosters.  “After the forward assembly is on there, we consider that a stacked booster. And then after that we’re looking at first ingress into the forward assembly,” Tormoen noted. “We have to install our access kits, which are platforms that go on the dome to make it a level, working surface.” 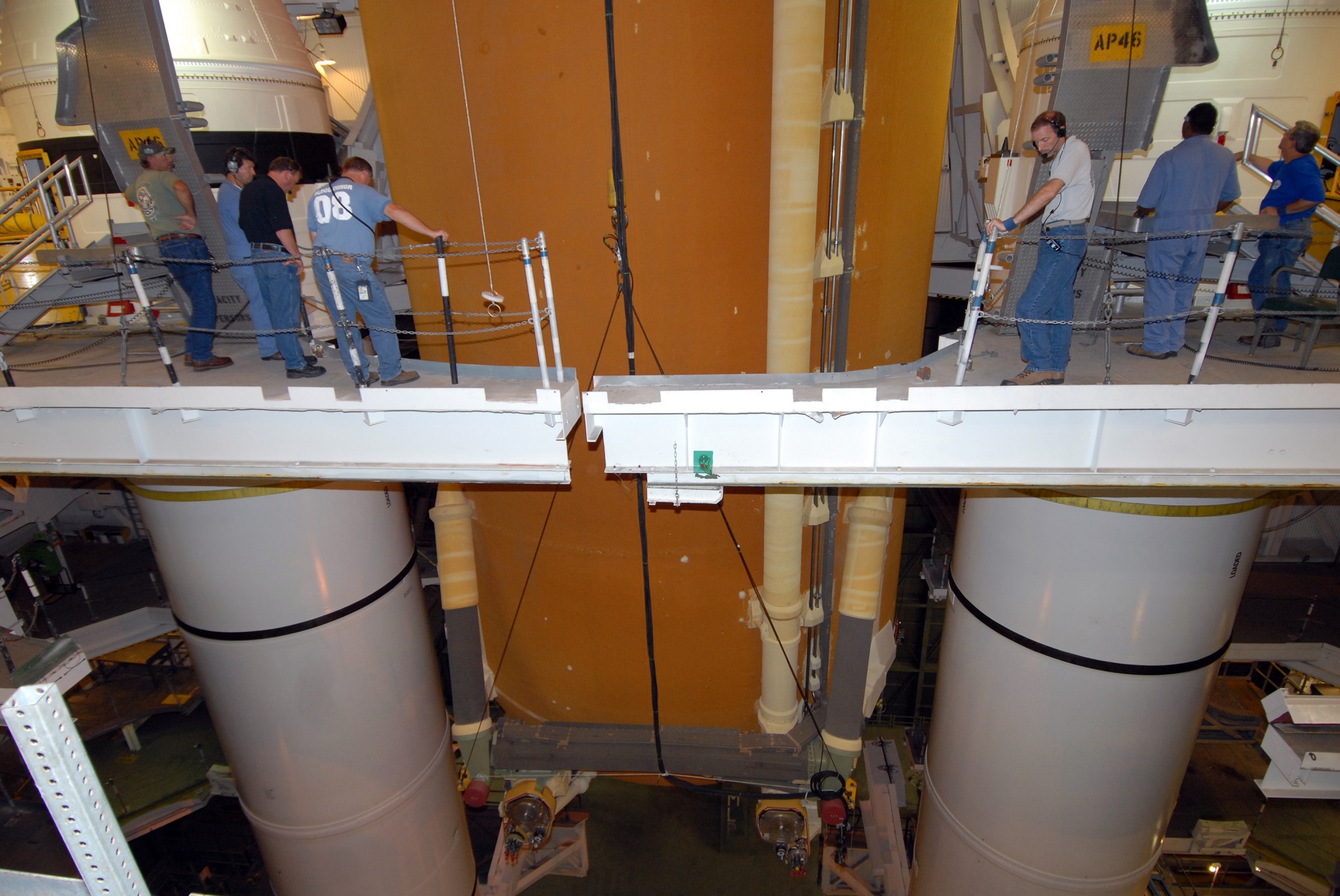 (Photo Caption: Just below the platform, yellow “booster puller” straps can just be seen around the two Shuttle solid rocket boosters as an External Tank is lowered in between them in 2008. Similar straps with extra instrumentation will be used to pull the completed SLS Boosters slightly outward and slightly farther away from the Core Stage as it is lowered in between by crane operators.)

“We’re looking at protecting the igniter area with what we call the doghouse cover, which is just another little protective dome to prevent feet and other personnel from contact with that area.”

The forward assemblies include the nose cone and frustrum at the top and the cylinder underneath that attaches to the forward motor segment.

The cylinder includes the forward structural attachment to either end of the Core Stage thrust beam that runs through its intertank; it also includes several of the booster avionics boxes that communicate with the SLS flight computers housed in the Core Stage.

Once the Core Stage is ready to be stacked with the boosters and is being lowered down between them, another Shuttle-era utility will be used. During Shuttle, when the External Tank was lowered between the boosters, straps were placed around the cases, and the boosters were pulled away from where the tank was being lowered to provide a little bit of extra clearance; the Core Stage and Booster diameters are the same as Shuttle and so a similar set up will be used when the time comes.

“We call it the booster puller,” Tormoen said. “The strap that they used to use during Shuttle has turned into a strap with a load cell and a position indicator so we can understand how hard we’re pulling on those boosters.”

“We want to get a little room for the mate, but we don’t want to pull too hard and cause stress on the vehicle. So we have added a load cell, and we have a position indicator as well to make sure that we are where we want those boosters to be to allow for that mate.”