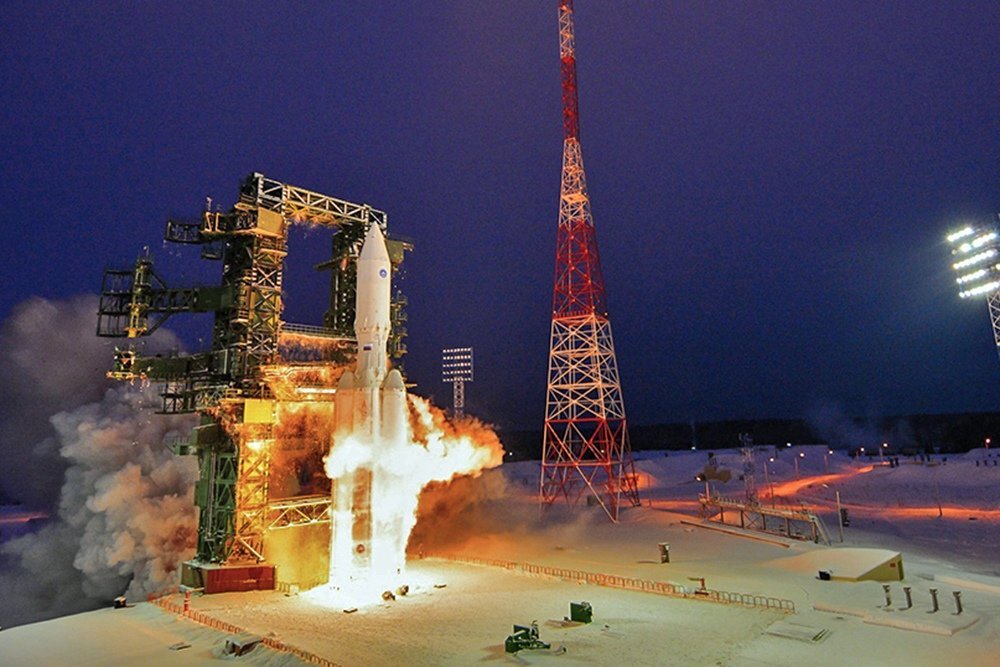 After a six-year pause, Russia has resumed flight tests of its next-generation Angara rocket with a demonstration mission from the Plesetsk Cosmodrome on Monday. The Angara-5 vehicle lifted off at 08:50 Moscow Time (05:50 UTC), carrying an inert payload bound for a near-geosynchronous orbit.

Monday’s launch marked the third flight of the Angara rocket, the second test of the heaviest configuration, Angara-5, and the type’s first flight since December 2014. The mission, which continues work to certify Angara to carry national security payloads, had already been delayed by several years due to manufacturing and quality control issues.

In part because of the uncertainty surrounding its schedule, the launch did not carry a functional payload. Instead, like the previous test launch, it mounted a mass simulator known as IPM: a mockup designed to mimic the weight of a typical satellite. With the launch expected to aim for a near-geostationary orbit, this would likely have replicated the mass of a communications satellite.

The previous delays added extra impetus to ensure a launch in December, as some components of the rocket were approaching their maximum certified launch date. If the launch had not taken place by the end of the year – the date at which the part warranties had been set to expire – a more lengthy delay would have resulted from the need to recertify, recondition or replace expired components.

Angara is a family of rockets developed by the Khrunichev State Research and Production Centre based around the Universalniy Raketniy Modul (URM) – or Universal Rocket Module. The URM-1 is a common booster used across the family of rockets, being employed as the first core stage of all Angara configurations, with additional units serving as side boosters on the larger versions of the rocket. Similarly, the URM-2 has been designed as a common second stage for the family, although it is not used on the smallest version of the rocket, Angara-1. 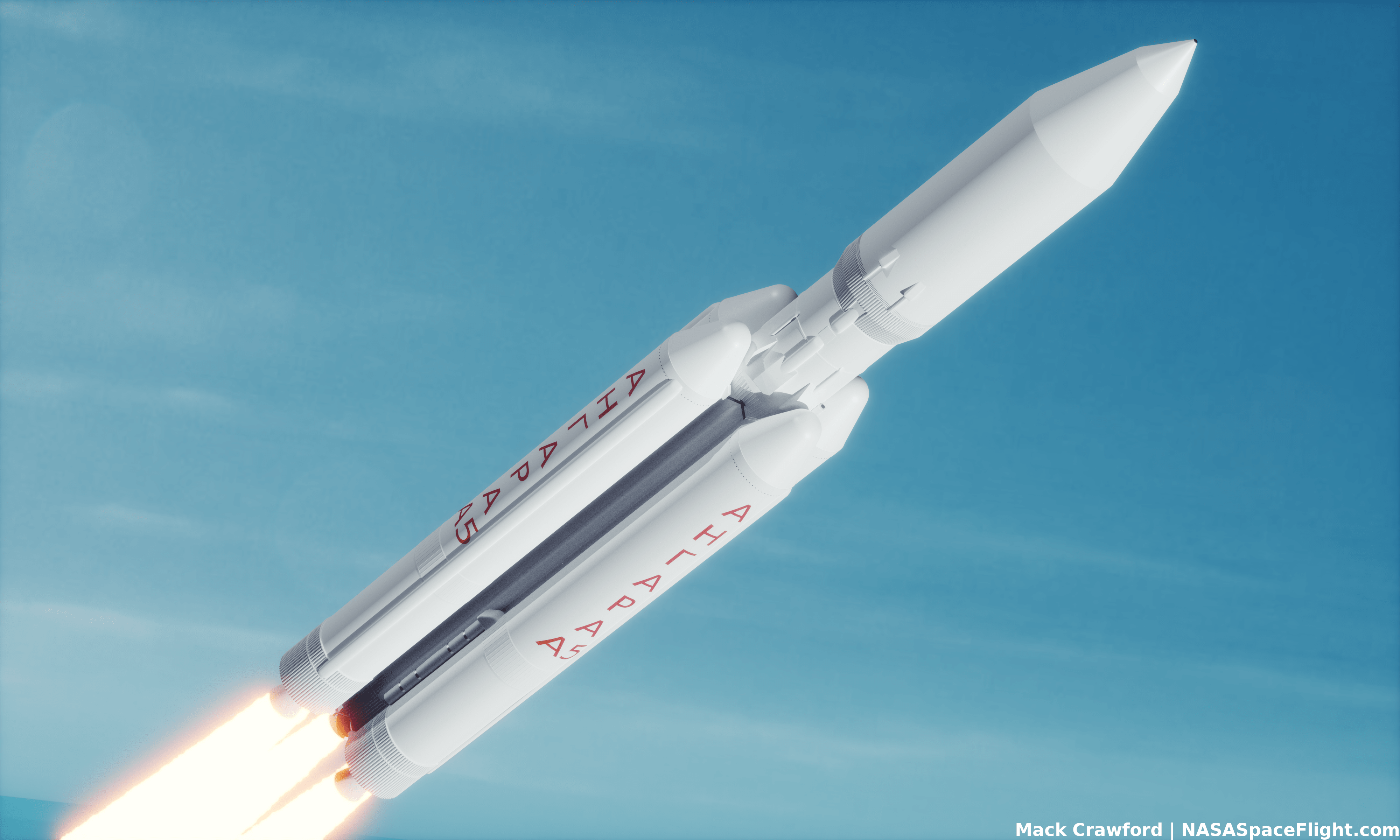 Original plans for the Angara family envisioned an array of different designs, from the smallest Angara-1 with a single URM-1 booster topped by either a Briz-KM or a modified Soyuz Blok I upper stage, through larger Angara-3 and Angara-5 versions with two and four side boosters respectively, the URM-2 second stage and optional additional upper stages. A further upgrade, Angara-7, was also proposed with six side boosters clustered around its core. In practice, only the Angara-1.2 – the version of Angara-1 with the Blok I upper stage – and Angara 5 have been developed.

Russia has developed Angara as a replacement for several rockets currently in service or recently retired. Chief amongst these is the 1960s-designed Proton rockets that are still used to carry Russia’s heaviest satellites into space and provide access to geostationary orbit. Proton’s age, reliability issues in recent years and environmental concerns due to its use of large quantities of toxic hypergolic propellants have led to plans for this veteran workhorse to be retired by the end of the decade. With Angara’s launch pads located at the Plesetsk and Vostochny Cosmodromes, Proton’s retirement will also reduce Russia’s reliance on the historic Baikonur Cosmodrome which it leases from Kazakhstan.

Angara first flew in July 2014, with a one-off Angara-1.2pp configuration used to flight-test both the URM-1 and URM-2 stages on a suborbital mission. Five months later, in December of the same year, the heavier Angara-5 made the type’s first orbital launch with a mass simulator payload. Although these marked Angara’s first test launches, three modified URM-1 boosters had already been flown prior to this as part of the Naro-1 rocket. Naro-1 was a collaboration between Russia and South Korea, with the latter developing a small solid-fueled upper stage and conducting the launches from its Naro Space Centre.

The versions of the booster used on the Naro launches had downrated RD-151 engines instead of the RD-191s that have been developed for Angara, however they gained valuable data before Angara itself would debut. The first and second Naro-1 launches failed. On the maiden flight the rocket’s payload fairing did not separate as planned. The cause of the second failure – which saw the rocket disintegrate just over two minutes into flight – was disputed with Korean engineers claiming the URM-1 had malfunctioned, while Russian engineers blamed the Korean upper stage. Naro-1 completed a successful mission on its third and final flight in 2013, after which the program reached its planned conclusion.

With these modified versions aside, the URM-1 is normally powered by an RD-191M main engine. This is a single-chamber engine derived from the RD-170 series of powerplants that were first developed for the Zenit and Energia family of rockets. This burns RG-1 propellant – rocket grade kerosene – oxidized by liquid oxygen. URM-2 burns the same propellant through its RD-0124A engine. This derives from the well-proven RD-0124 that has powered the third stage of Soyuz-2-1b and second stage of Soyuz-2-1v rockets for the last decade and a half, with only minor modifications to allow for the URM-2’s longer burn times.

While Angara-5 can be flown with just these stages, allowing it to deliver heavy payloads into low Earth orbit, most of is missions will use an additional upper stage in order to reach higher orbits. The Briz-M and Blok DM-03 stages, already flying on the Proton rocket, can both be used. A new cryogenic-fuel upper stage, KVTK, has also been proposed for this version of the rocket.

Monday’s launch made use Khrunichev’s Briz-M upper stage. Briz-M was first flown in 1999 and is currently also used as the fourth stage on the majority of Proton launches. Burning hypergolic propellants – unsymmetrical dimethylhydrazine and dinitrogen tetroxide – the Briz-M was powered by an S5.98M engine with four small vernier motors that provide roll control. Briz-M consisted of a central propulsion module surrounded by a torus-shaped additional propellant tank which can be jettisoned once its fuel has been expended. Briz-M was designed to be restarted multiple times in flight and coast for extended periods of time, allowing complex missions to be undertaken.

The launch took place from the Plesetsk Cosmodrome in north-western Russia. This is Russia’s main military launch site, although it does occasionally host civilian launches, and the site’s high latitude means that the Briz-M’s ability to fly complex missions is being used to its fullest in delivering a payload to a near-geostationary orbit high over the equator.

The Angara launch pad at Plesetsk’s Site 35/1 originally began construction in 1986 to support military launches of the Zenit-2 rocket. This was halted in the early 1990s, when Zenit fell out of favor following the collapse of the Soviet Union, with some of the pad’s equipment later being used by Sea Launch to outfit the floating Odyssey launch platform for commercial Zenit missions. Angara launches on its first flight in the A5 configuration, and its second ever flight, in 2014 – via Russian Ministry of Defense

After remaining derelict for several years, Site 35 was selected as the first Angara launch pad and redevelopment work began. It can support both the Angara-1 and Angara-5 configurations, with the first launch from the complex being Angara’s maiden flight in 2014. Like most Russian launch pads, rockets are integrated horizontally in a nearby building – the MIK – before being moved by rail to the pad where they are erected.

Having originally been rolled out in November for a launch attempt, Angara was rolled back to the assembly building to resolve issues that had prevented a launch attempt being made. The rocket subsequently remained in its hangar to wait out a Soyuz launch from the nearby Site 43, which took place on 3 December. With this completed, Angara was transported to the fueling area for its Briz-M upper stage on 7 December, before rolling back out to the launch pad on the ninth.

After lifting off, Angara flew east from Plesetsk. About 47 seconds into the mission its core URM-1 booster throttled down its RD-191M engine to limit acceleration and conserve fuel so it could burn longer than the four outboard boosters. These side boosters continued to burn at full thrust until around the three-minute, 34-second mark, at which point they shut down and separated. Throttling back up, the core stage burned for another 111 seconds before its own shutdown and separation. Following stage separation, the RD-0124A engine of the URM-2 second stage ignited, firing for just over seven minutes. Angara’s payload fairing would have separated early in the second stage burn.

Once the second stage completed its burn, Briz-M separated to continue the mission and deliver the simulated payload into what is expected to be a near-geostationary orbit. Although a timeline for this mission or parameters for the target orbit have not been disclosed, it will likely be similar to the previous Angara-5 launch which placed its own mass simulator just above the geostationary belt. On that mission, Briz-M made four burns spread out over the course of several hours, separating its auxiliary propellant tank during one of the lengthy coast phases between its burns. Such a mission profile will see the launch conclude – since the mass simulator does not separate from the upper stage – about nine hours after liftoff.

Monday’s launch was Russia’s penultimate mission of 2020, with a Soyuz launch from the Vostochny Cosmodrome on Friday expected to end the year. Angara testing is expected to continue next year, with the next Angara-5 launch tentatively scheduled for June. This is expected to carry another mass simulator, this time using the Blok DM-03 upper stage instead of the Briz-M. The first commercial launch of the smaller Angara-1.2 vehicle is also expected towards the end of 2021, with South Korea’s Arirang 6 satellite aboard.