Year in Review: Mars missions, Lunar Samples, Crew launched from the US, and Starlink 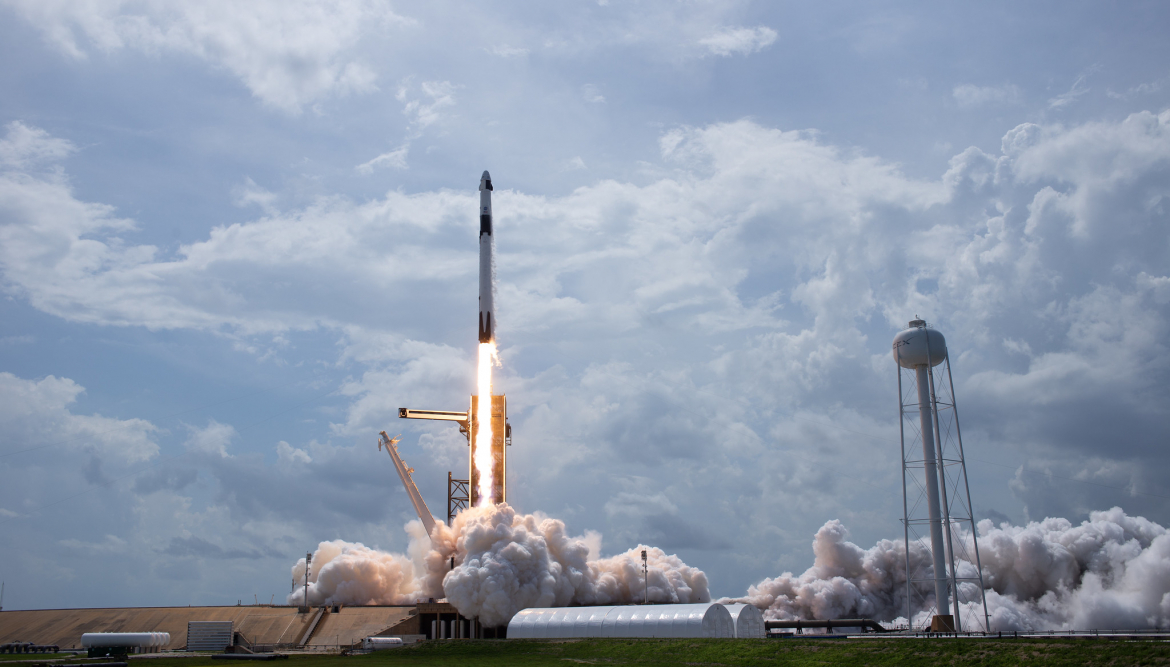 Despite a worldwide pandemic which affected agencies around the world, 2020 featured many significant achievements in spaceflight. In total, 114 orbital launches were attempted, including deep space missions like Solar Orbiter, three missions to Mars, and the Chinese Chang’e 5 lunar sample return mission. Also this year, the United States regained domestic crew launch capability with SpaceX’s Crew Dragon spacecraft, and SpaceX launched hundreds of new satellites for the growing Starlink constellation.

Of the 114 orbital launch attempts made in 2020, eight were the maiden flights of new launch vehicles. Of these debuts, four successfully reached orbit on the first attempt: the Iranian Qased rocket, and the Chinese Long March 5B, Ceres-1, and Long March 8 launchers. The other four, Chinese Long March 7A and Kuaizhou-11, Virgin Orbit’s LauncherOne, and Astra’s Rocket 3, did not.

In total, 10 of the 114 attempts made this year failed to reach orbit. However, only four of these failures were by launchers which had previously reached orbit safely. The Iranian Simorgh rocket failed on its third orbital attempt, and has yet to reach orbit, and a second attempt by Astra with Rocket 3 came close, but fell short. Four established launchers suffered launch failures in 2020: the Chinese Long March 3B and Kuaizhou-1A vehicles, Rocket Lab’s Electron, and Arianespace’s Vega launch vehicle.

In total, SpaceX conducted 25 orbital launches in 2020, the most orbital launches in a year since the company was founded. 14 flights were in support of the Starlink satellite internet constellation, launching a total of 833 new satellites into low Earth orbit. SpaceX also completed the suborbital Crew Dragon In-Flight Abort test, for a total of 26 Falcon 9 flights this year. 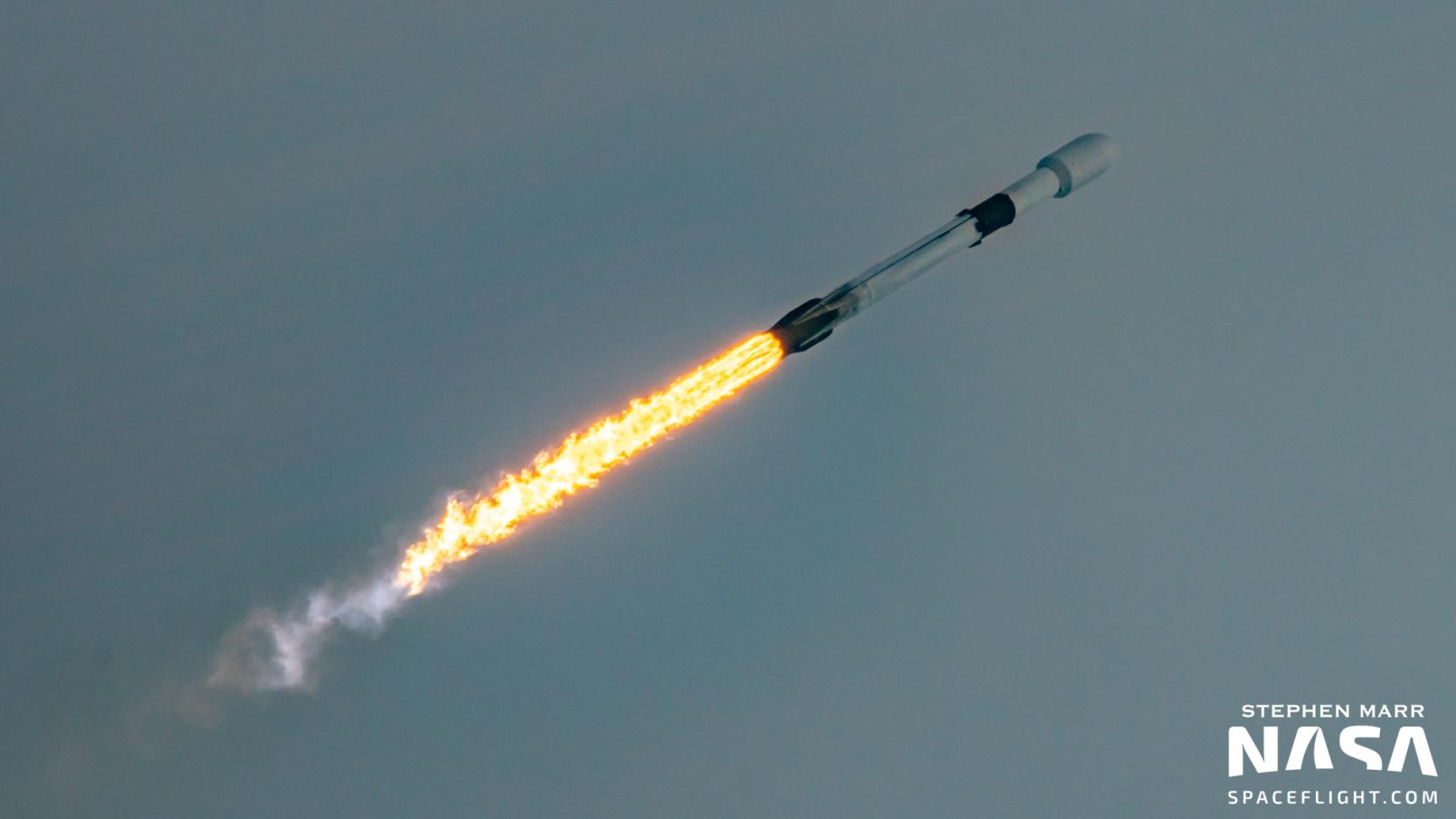 Other flagship missions launched by SpaceX this year included the company’s first two crewed missions, Demo-2 and Crew-1, as part of NASA’s Commercial Crew Program. These were the first crewed missions to orbit launched from the United States since the retirement of the Space Shuttle in 2011. SpaceX also debuted the Cargo Dragon 2 spacecraft on the CRS-21 mission, following the Cargo Dragon 1 retirement flight on CRS-20. Testing of the Starship launch system also progressed with three atmospheric test flights using the SN5, SN6, and SN8 vehicles.

All of SpaceX’s orbital launches utilized the Falcon 9 launch vehicle, with zero flights of Falcon Heavy. The 26 total Falcon 9 flights were completed with just 11 first stage boosters, as new reuse milestones were reached and turnaround records were set. All of the orbital launches conducted by SpaceX attempted first stage landings, with a 92% success rate. The two failures occurred on the fifth and sixth Starlink missions, which both attempted landings on autonomous spaceport drone ships.

On the fifth Starlink mission, also known as Starlink v1.0 L4, the booster experienced different wind conditions during landing than predicted, and automatically aborted to a splashdown away from the drone ship. On the next Starlink flight, a first stage engine failure occurred just before main engine cutoff due to a small amount of isopropyl alcohol trapped in a sensor. This was just the second ever in-flight engine failure for Falcon 9, the other being the CRS-1 mission. Just like CRS-1, the success of the primary mission was unaffected by the engine failure, and SpaceX achieved a 100% mission success rate in 2020. SpaceX has not had a launch failure since the debut of the Block 5 Falcon 9 and Falcon Heavy launchers.

SpaceX had more limited success with fairing recovery in 2020. Over 21 missions which utilized payload fairings, which excludes Dragon missions, 35 of 42 fairing halves were recovered with no visible damage. Only seven of these recoveries were catches on board SpaceX’s fairing recovery vessels, as the others were scooped after splashing down in the ocean. 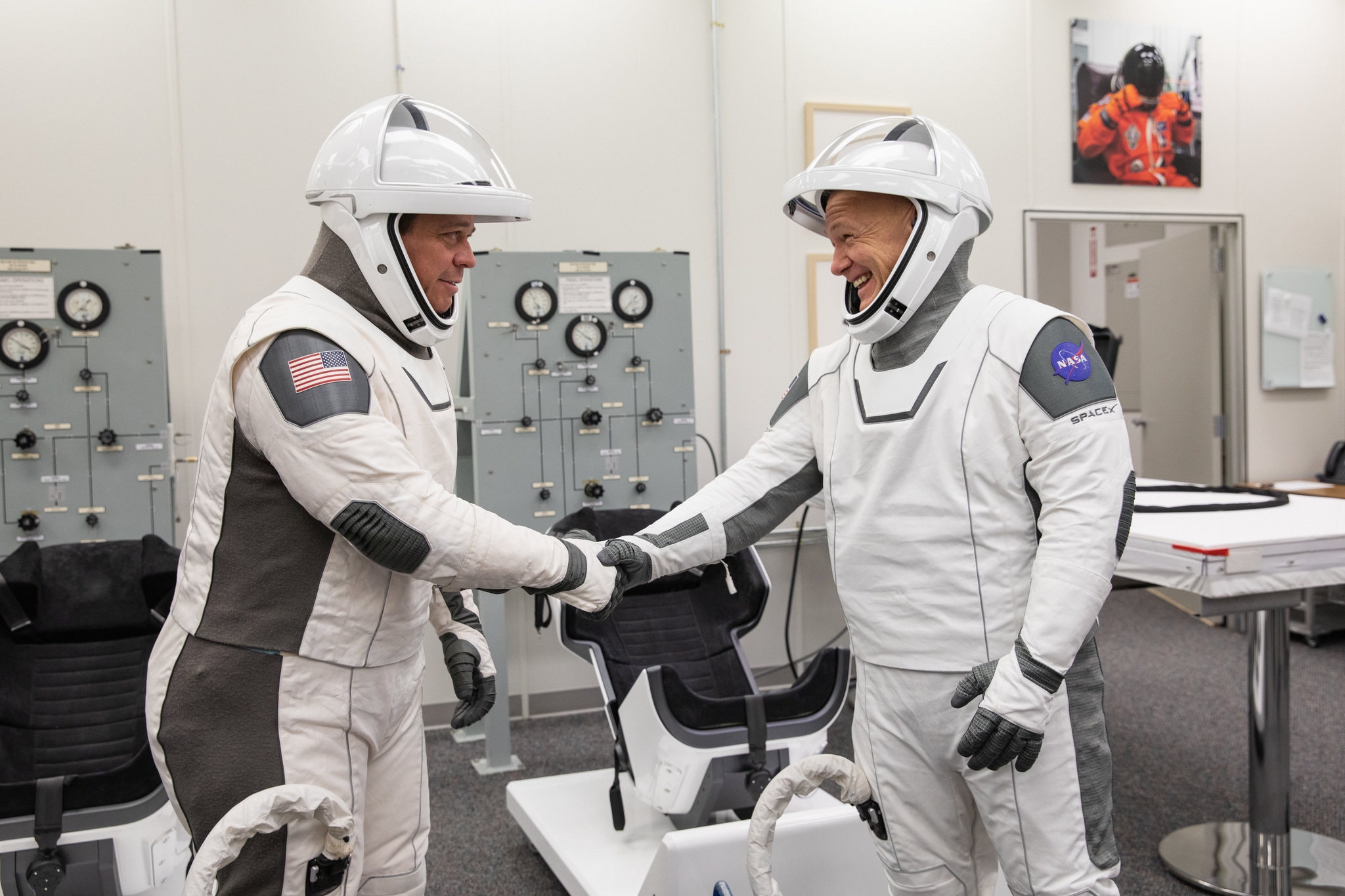 Robert Behnken (left) and Doug Hurley (right), the first two astronauts launched to orbit from the United States since 2011 – via NASA

In 2021, Elon Musk says that SpaceX is aiming for 48 orbital launches, an average of about one launch every week. The upcoming manifest will include many more Starlink missions, two NASA Crew Dragon flights and up to two private Crew Dragon flights for Axiom and Space Adventures, three flights of Cargo Dragon 2, and as many as three Falcon Heavy launches. Two Falcon Heavy rockets will launch the classified USSF-44 and USSF-52 missions for the United States Space Force, and the launch of a ViaSat-3 communications satellite on Falcon Heavy could occur as early as next year.

A slate of robotic missions for NASA are also scheduled to launch on Falcon 9 next year, including the Double Asteroid Redirection Test (DART), the Nova-C moon lander for the Commercial Lunar Payload Services (CLPS) program, and the Imaging X-ray Polarimetry Explorer (IXPE) mission.

Depending on how Starship and Super Heavy booster testing progresses over the next several months, its possible that the orbital debut of Starship could occur near the end of 2021.

Elsewhere in the United States, United Launch Alliance conducted six launches and maintained their perfect mission success record. The workhorse Atlas V rocket flew five times, including the heliocentric Solar Orbiter mission and the Mars 2020 mission with the Perseverance rover and Ingenuity helicopter, which will land on Mars in February 2021. 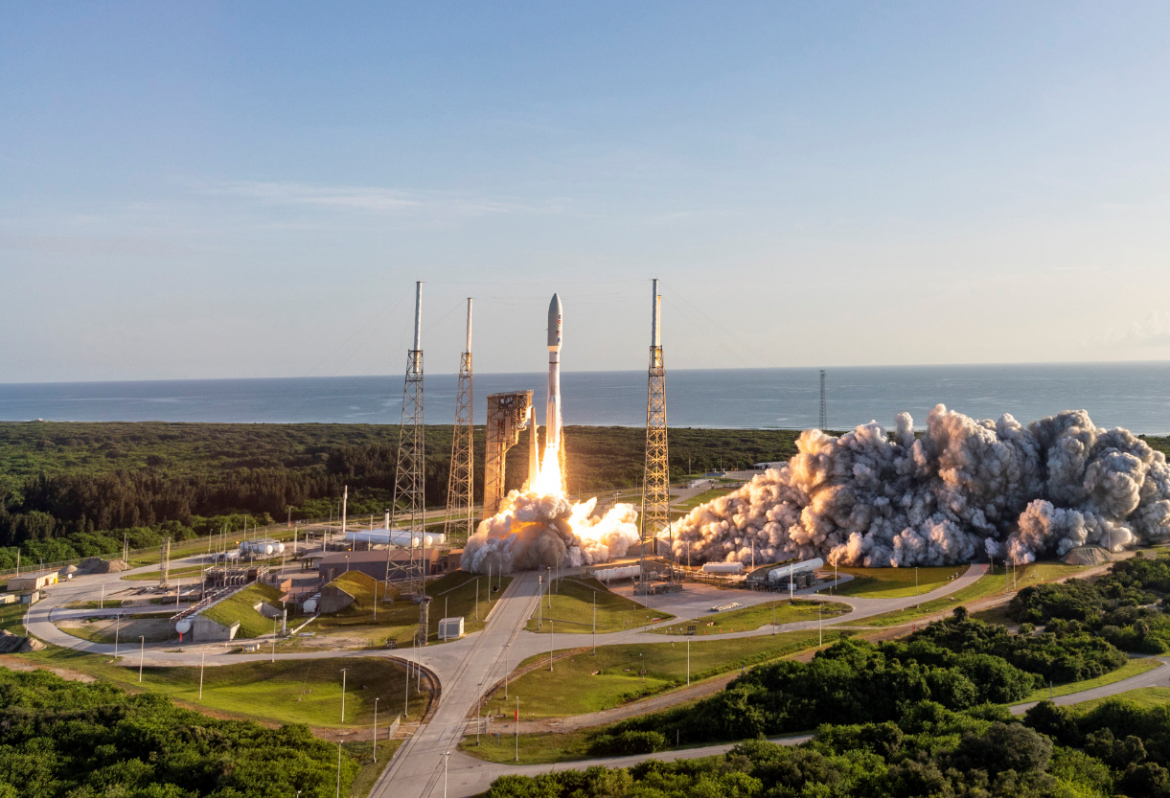 Atlas V also launched the first mission for the Space Force, AEHF-6, and and the sixth flight of the Space Force’s X-37B spaceplane, which remains in orbit conducting its mission today. ULA also debuted the Northrop Grumman GEM-63 solid rocket boosters on the NROL-101 mission, which will evolve into the GEM-63XL boosters for the upcoming Vulcan rocket.

ULA’s sixth flight of 2020 was the NROL-44 mission on Delta IV Heavy. The launch was delayed over three months from its first attempt, including two aborts in the final seconds of the countdown, before successfully lifting off. Four Delta IV Heavy missions now remain before the launcher’s retirement.

The 2021 ULA manifest includes the second orbital flight test OFT-2 of Boeing’s Starliner spacecraft, possibly the first crewed Starliner test flight CFT, and the Lucy asteroid flyby mission for NASA, all launching on Atlas V. One Delta IV Heavy mission is scheduled for next year, NROL-82 from Vandenberg Air Force Base, California. The first launch of the Vulcan rocket, carrying the Peregrine robotic moon lander, could also possibly occur in 2021.

Rocket Lab, the smallsat launch provider based in the United States and launching from New Zealand, made seven orbital launch attempts with their Electron rocket, six of which were successful. The “Pics Or It Didn’t Happen” mission failed during second stage flight due to an electrical issue. Rocket Lab returned to flight less than two months later, and debuted the Photon satellite bus on that mission. Rocket Lab also achieved a soft splashdown of Electron’s first stage on the “Return to Sender” mission, a step towards recovery and reuse.

Here's our most epic video of 2020. Turn the sound up! pic.twitter.com/QW6OmtGXjV

The debut of Rocket Lab’s Launch Complex 2 at Wallops Flight Facility in Virginia and Launch Complex 1B on the Mahia Peninsula of New Zealand are both planned for no earlier than 2021. One mission on next year’s manifest is the CAPSTONE mission to the lunar orbit which will be used for NASA’s Gateway outpost, which will launch from Wallops.

Northrop Grumman launched three orbital missions in 2020, all successful. Two Antares rockets launched two Cygnus cargo spacecraft to the ISS, and a Minotaur IV rocket launched the NROL-129 mission from Wallops. Two more Antares and Cygnus launches are scheduled for 2021, as well as a Minotaur I rocket on the NROL-111 mission, also from Wallops.

Two other American companies made orbital launch attempts in 2020, both making their unsuccessful first attempts. Virgin Orbit’s LauncherOne and Astra’s Rocket 3 vehicles, while not successful in 2020, are both set to make their next attempts in early 2021. Two other small lift launch vehicles, Firefly Aerospace’s Alpha and Relativity Space’s Terran 1, could also debut next year. 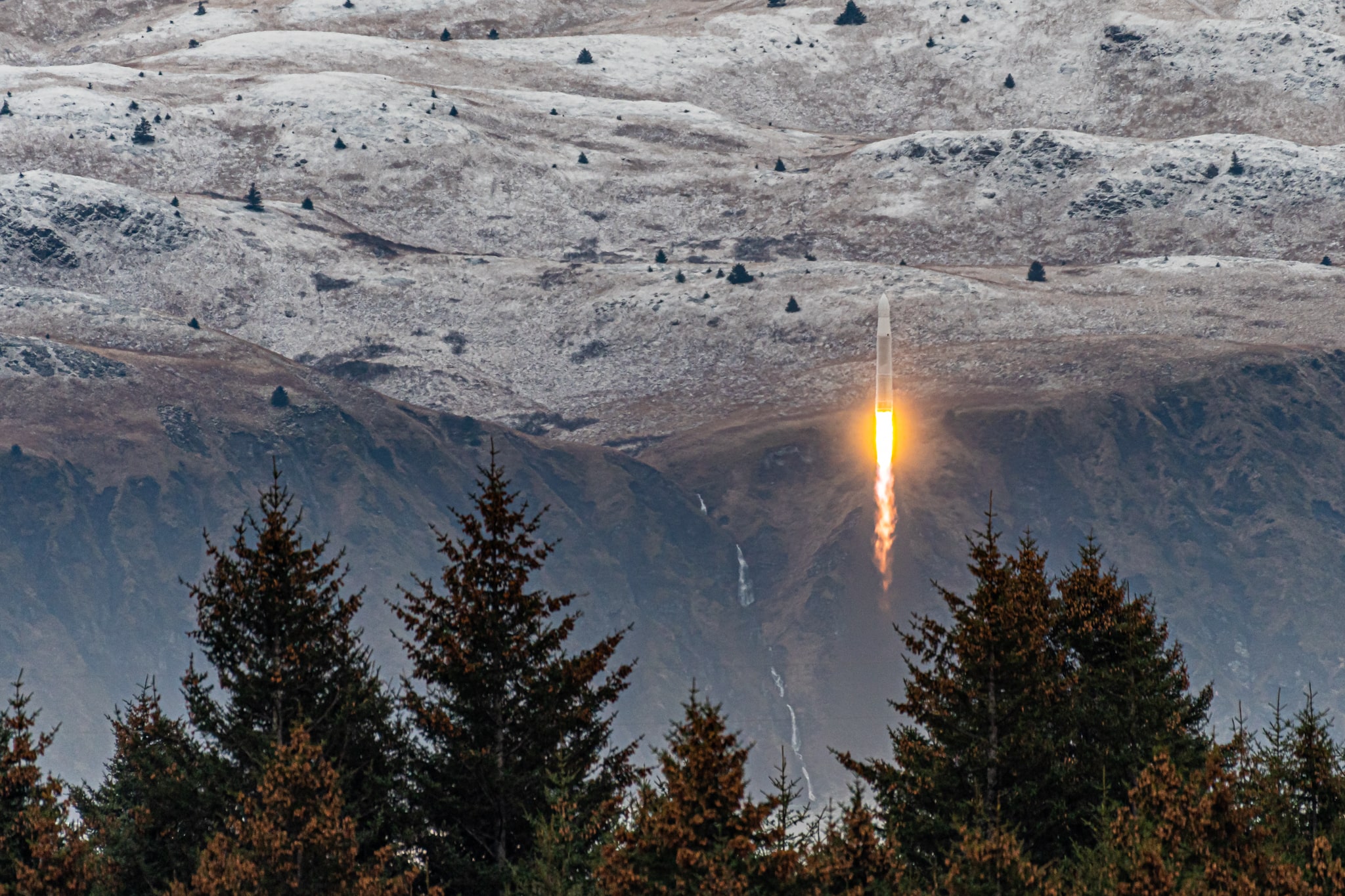 In total, there were 44 US orbital launch attempts this year, including Rocket Lab’s launches from New Zealand but operated from the US. 40 were successful. This is both the most successes and the most attempts of any nation in 2020.

Blue Origin completed one flight of their suborbital New Shepard rocket, and has more planned for 2021. There is also the possibility of the orbital New Glenn launch vehicle making its debut next year. Another suborbital launcher, Virgin Galactic’s SpaceShipTwo, made one spaceflight attempt from Spaceport America in New Mexico, which was safely aborted shortly after release from the WhiteKnightTwo carrier aircraft.

The nation with the second most orbital launches this year is China, amassing 35 successes and four failures. 34 launches were completed by the China Aerospace Science and Technology Corporation (CASC), China’s state-owned launch provider. The others were completed by private Chinese launch companies, four by ExPace, and one by Galactic Energy.

China’s 2020 launches included the final BeiDou-3 satellite, completing China’s satellite navigation constellation, a test flight of a next generation crew capsule, the Tianwen-1 Mars mission, an experimental spaceplane mission, and the Chang’e 5 lunar sample return. In 2021, China is expected to launch the first module of a new Chinese space station. 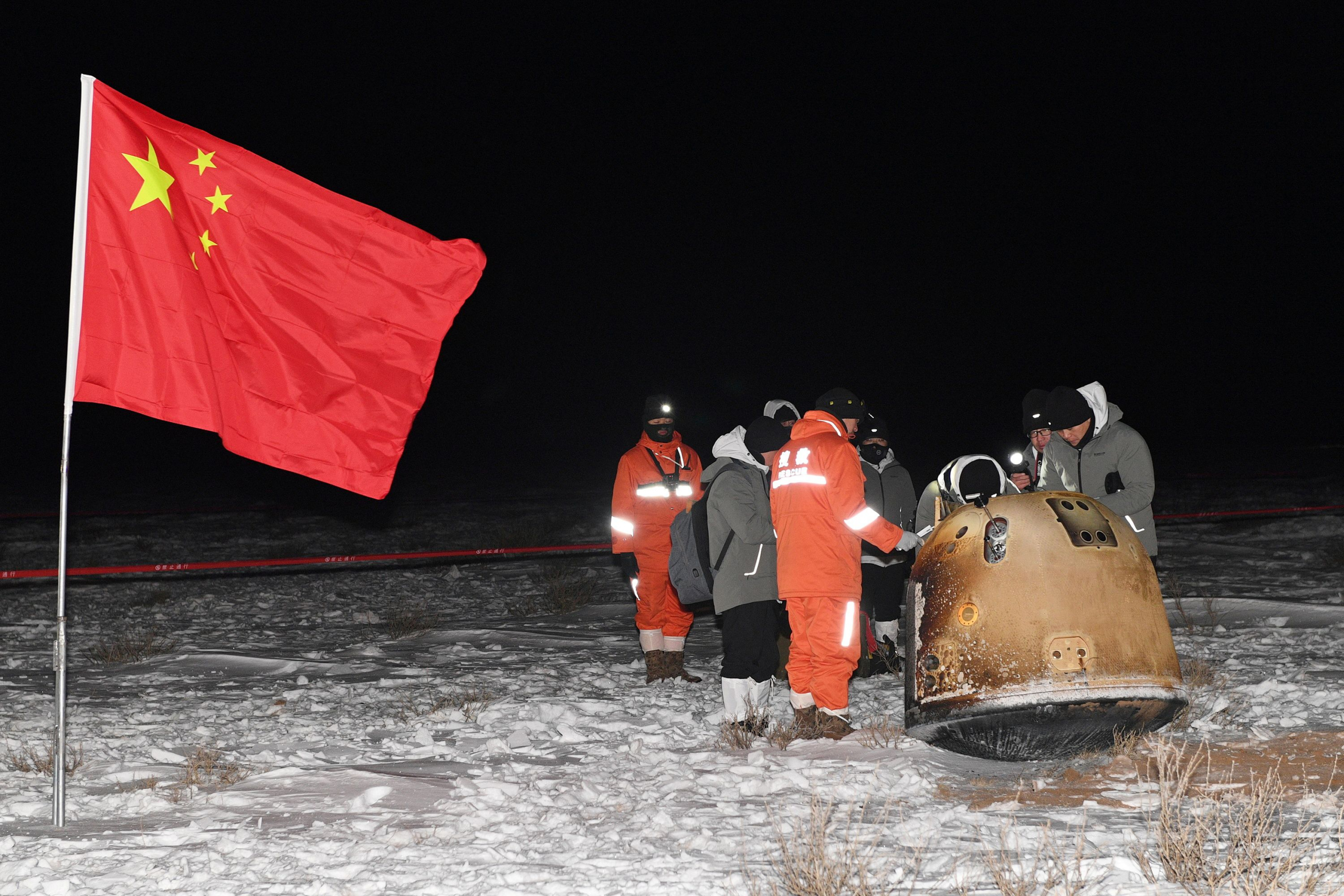 The Russian space program completed 12 orbital launches this year, all successful. Two crewed Soyuz missions and two Progress cargo missions flew to the ISS, and the second test flight of the Angara A5 rocket was launched. Angara and Proton each flew just one mission in 2020, complementing 10 Soyuz launches operated by the Russian space program. There are up to three crewed Soyuz missions planned for 2021.

The Soyuz rocket was the second most active launcher this year, behind Falcon 9, thanks to five additional launches operated by European launch provider Arianespace. Three of these launches were in support of the OneWeb satellite constellation. In addition to the five Soyuz launches, Arianespace launched three Ariane 5 rockets and 2 Vega rockets, one of which was a launch failure. Next year, Arianespace will launch the James Webb Space Telescope (JWST) for NASA on Ariane 5, and possibly debut the new Vega-C launcher.

Japan made four successful orbital launches, three with the H-IIA rocket and the H-IIB retirement flight. The H-IIA launch slate included the Al Amal mars mission for the United Arab Emirates. NASA’s Mars 2020, China’s Tianwen-1, and the UAE’s Al Amal missions will all arrive at Mars in February 2021.

The Indian Space Research Organization (ISRO) was heavily affected by the COVID-19 pandemic, and thus only completed two orbital launches near the end of 2020. Both flights of the PSLV rocket were successful.

Iran made two orbital launch attempts with one success this year, and Israel completed one successful retrograde orbit launch with the Shavit-2 rocket. In total, seven nations launched missions to orbit in 2020, plus Arianespace’s ten missions which are a cooperation between several European countries.

34 different launch vehicles flew in 2020, and payloads from 29 different countries were on board. In 2021, the world’s space agencies are aiming for several ambitious missions, including several maiden flights of new rockets.