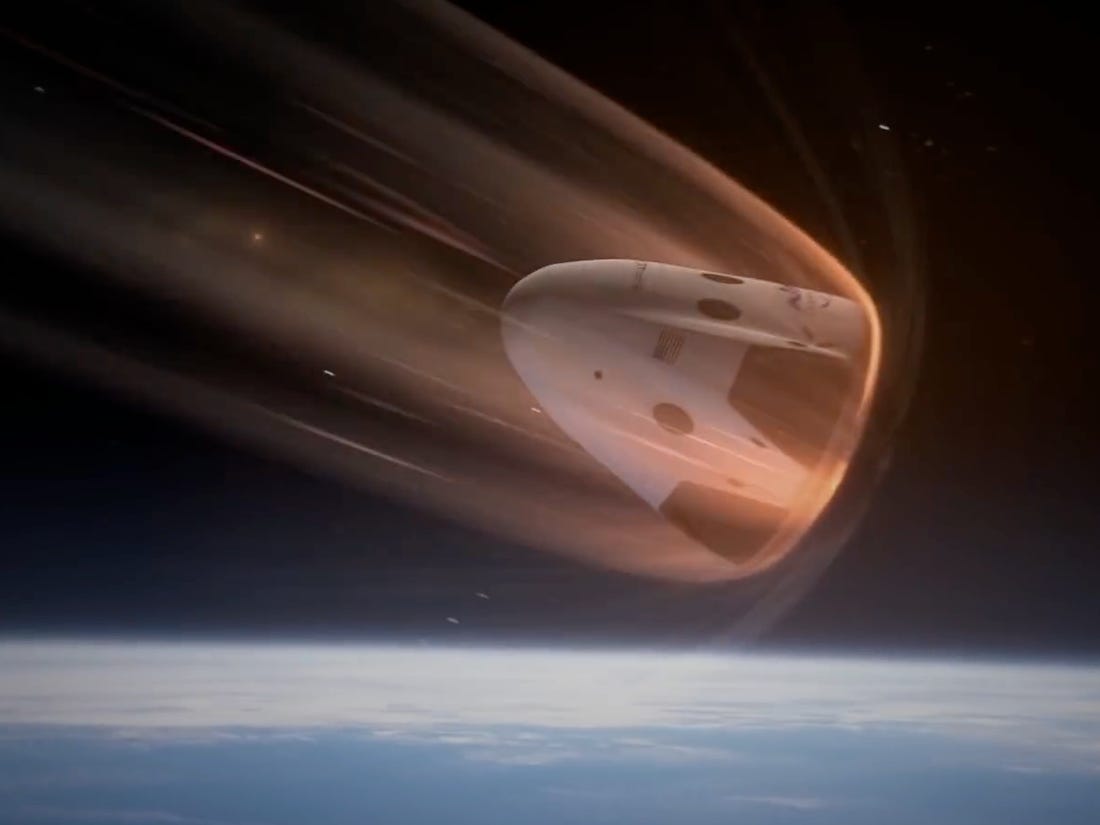 The CRS-21 automated cargo Dragon v2, the first-of-its-kind for the v2 class designed and developed by SpaceX, has completed its mission after undocked from the International Space Station and conducting a 35 hour homecoming that culminated with a splashdown off the coast of Tampa, Florida on Wednesday, 13 January at 20:27 EST (14 January at 01:27 UTC).

Undocking and splashdown had originally been planned for Monday, 11 January.  However, a confusing series of messages about the weather that first gave approval and clearance to undock resulted just minutes later, and less than two minutes before the undocking process was to begin, in NASA calling up to the Station announcing a stop to undocking operations.

The CRS-21 mission is not only the first flight of a Dragon v2 variant in its cargo only configuration, but also marks the first time a U.S. cargo vehicle docked to/undocked from the International Space Station, as previous Dragons as well as prior and ongoing Cygnus resupply missions all arrived/will arrive at the Station to be grappled by Canadarm2 and then berthed to one of the outpost’s common berthing ports.

As part of an upgrade by SpaceX for the Commercial Resupply Services 2 round of cargo delivery contracts, SpaceX bid a cargo-only version of the Dragon v2 craft, designed in-depth with NASA to ferry astronauts to and from the Station for the agency’s Commercial Crew Program.

Those crew flights of the v2 Dragon began in 2020, with a crew demonstration flight from May to August and the first operational crew rotation flight launching in mid-November. 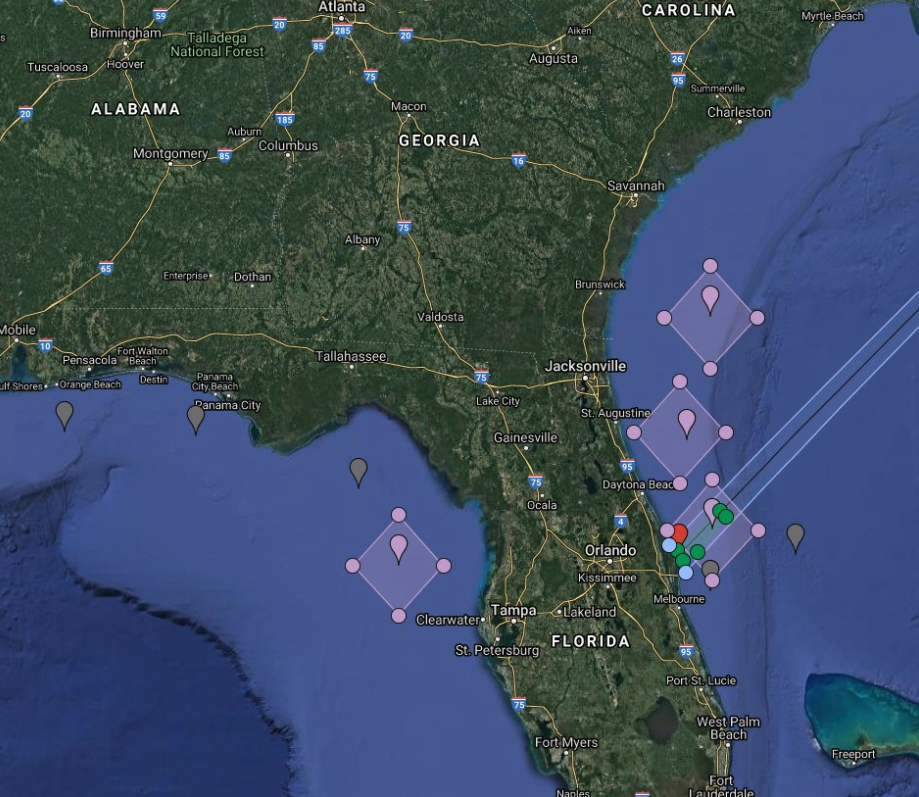 Primary changes between the Dragon v2 variants that carry crew and those that only carry cargo are the removal of life support systems not needed when humans are not aboard, removal of crew systems (such as seats), elimination of the SuperDraco launch abort system, the use of shorter-mission certified solar arrays, and the removal of two stabilization fins on Dragon’s trunk that are only needed for atmospheric stability during an intact launch abort.

Moreover,  improvements from the original v1 cargo Dragon include additional space to bring more supplies to and from the International Space Station.

Dragon v2’s size creates a larger internal cargo volume that allows for double the amount of powered lockers to be returned from the International Space Station, supporting up to 12 and enabling the transport of more cold and powered cargo as well as additional payload returns from the orbital outpost.

“The old capsule was like a cream filled doughnut.  You packed everything around the walls, and then in the middle we put a big giant stack of bags,” said Mary Walsh, KSC Research Integration Office utilization flight lead.

“This upgraded cargo Dragon is more like a three-story house.  You put stuff in the basement, then you pack that second story, then you go upstairs and pack the third story.  So it’s really different from a design perspective.” 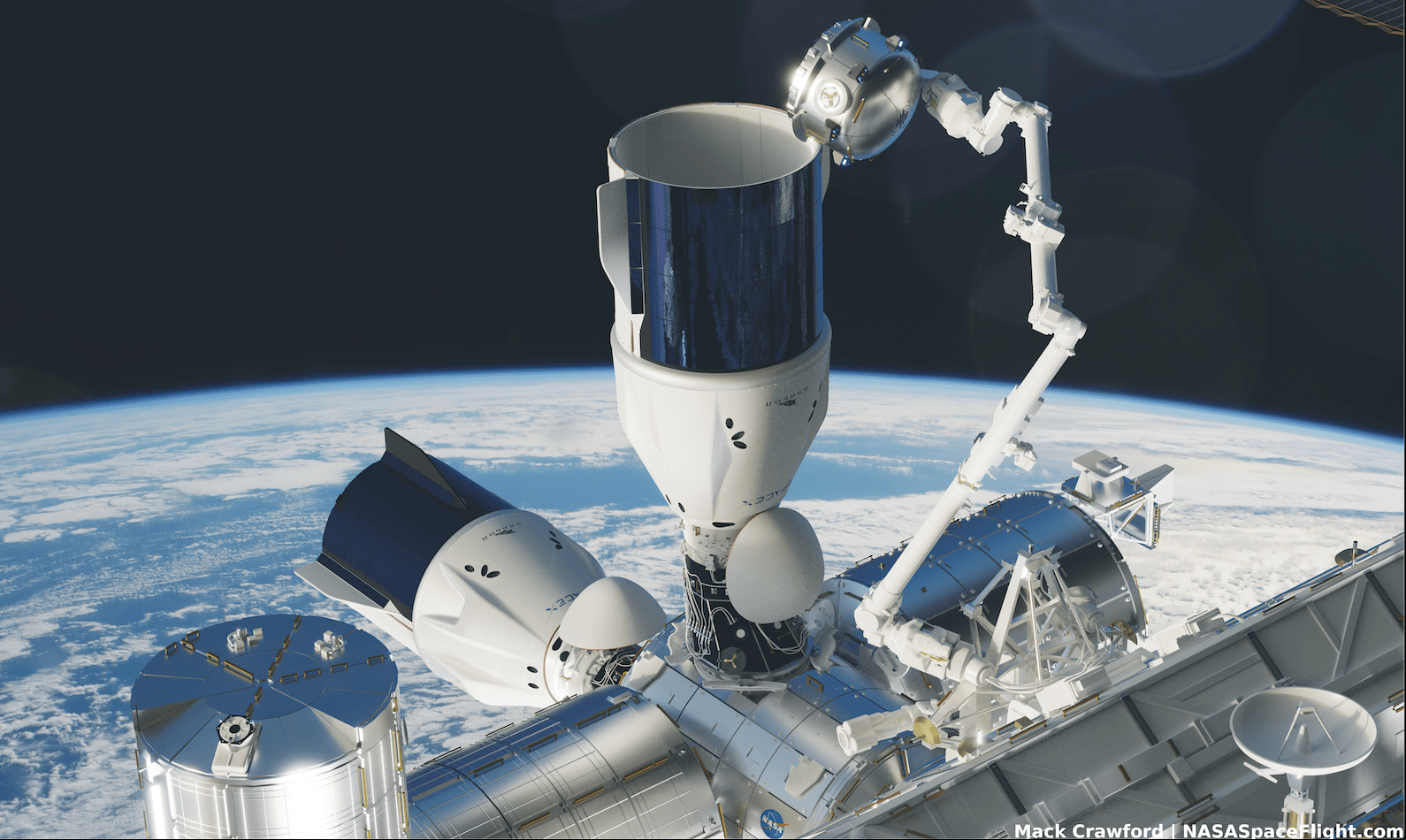 After docking, Canadarm2 reached in the CRS-21 cargo Dragon v2’s trunk to remove the Bishop Airlock from Nanoracks. (Credit: Mack Crawford for NSF/L2)

Dragon v2 is currently the only vessel, in both its crew and cargo configurations, designed to return experiments from the Station — a roll inherited from Dragon v1.

In 2022 at the earliest, based on program readiness and launch vehicle (Vulcan) introduction delays, Sierra Nevada Corporation’s Dream Chaser mini-lifting body cargo vehicle will also be able to return science experiments from the Station once it enters service.

Until then, the role falls to the Dragon fleet (though if the experiments are small enough a few items can be crammed into the crew return capsule of Soyuz if needed).

Some of the experiments that will return aboard CRS-21 include:

Rodent Research 23 will return live mice that are part of an experiment to study arteries, veins, and lymphatic structures in the eye as well as changes to the retina both before and after spaceflight.

The living containers for the mice that are part of Rodent Research-23. (Credit: NASA)

The primary aim of the experiment is to understand how those changes impair vision given that more than 40% of people who have flown long-duration missions on various space stations have experienced vision impairment — known as Spaceflight-Associated Neuro-ocular Syndrome.

Likewise, the Cardinal Heart experiment studied how changes in gravity affected cardiovascular cells at the cellular and tissue level.  The genius part of this experiment is that it used 3D engineered heart tissues to perform the study.

The primary aim of Cardinal Heart is to provide new understanding for a range of heart conditions and to help identify new treatments and support developing new screening measures to protect against cardiovascular risks both for people’s everyday lives on Earth and for future astronauts prior to spaceflight — something that will become more important as the commercial space market opens a new frontier to more and more “everyday” people.

In the biological realm, the JAXA experiment, Space Organogenesis, demonstrated ways of 3D growing organ buds from human stem cells in microgravity in an attempt to better understand changes to gene expression that exist during development off-planet.

Potential impacts from the study include demonstrating ways that microgravity can be used advantageously in regenerative medicine.  This could contribute to new technologies needed to create artificial organs not just for future human enterprises throughout the solar system and on long-duration spaceflight, but also right here on Earth.

Meanwhile, the Bacterial Adhesion and Corrosion experiment sought to identify bacterial genes used in biofilm growth and whether they could corrode stainless steel and were effective as a silver-based disinfectant.

Scientists behind the experiment hope it will provide a path forward to identify ways to control and remove resistant biofilms from the inside a spacecraft during future long-duration missions as well as serve as additional disinfectant options on Earth.

Of the highlighted experiments returning on CRS-21, the only one that does not in some way revolve around biological experimentation is the return of fiber optics produced onboard Station.

The production is part of an ongoing series of experiments in fiber optic creation using microgravity to make a product known as ZBLAN (zirconium, barium, lanthanum, sodium, and aluminum).

The idea surrounding the experiment, which has flown multiple times over the last several years, is to verify experimental studies showing that fibers created in space exhibit far superior qualities to those produced on Earth.

ZBLAN might sound like something from sci-fi, but we're using it to make optical fibers in space!
This past week, I've been conducting the Fiber Optic Production experiment, which could help verify if fibers made in microgravity exhibit superior qualities to those made on Earth. pic.twitter.com/XsxrgwAbsr

The experiment is also one of the first demonstrating commercial space-based manufacturing practices for everyday equipment used across the planet and also seeks to demonstrate ways to prove the cost-effectiveness of such production in the future.

After physically separating from the International Space Station, Dragon used its Draco maneuvering thrusters to pulse itself away from and safely leave behind the orbital outpost.  Those burns also aligned the craft into the proper orbit so the deorbit burn aligns the vessel’s ground track with the landing location just off the coast of Florida.

Monday’s aborted landing would have seen the craft return off the coast of Daytona Beach, one of three landing locations in the Atlantic off the east coast of Florida, with the other two being Cape Canaveral and Jacksonville.

Cape Canaveral is the preferred landing site whenever possible; however, other options in the Atlantic Ocean, which would be the first backups before going into the Gulf of Mexico, are available in the event of weather or sea state concerns in and around the spaceport.

This was the case Monday, with NASA selecting Daytona Beach as the primary splashdown site for the day in what would have been the first space mission to return to the vicinity of the city, which is located 80 km north of the Kennedy Space Center/Cape Canaveral Space Force Station and roughly 75 km southwest of the previously targeted splashdown location.

With splashdown moved to Wednesday, weather conditions in the Atlantic remain unfavorable to return Dragon to any of those three locations.  Instead, the craft came back to the Gulf of Mexico, landing off the coast of Tampa, Florida.

NASA is targeting CRS-21 splashdown at 8:27pm ET on Wednesday – offshore near Tampa, Gulf of Mexico.

Recovery ship GO Navigator will be on station. pic.twitter.com/Oj4njBCDfR

The Tampa landing precluded most — if not all — land-based observers from witnessing Dragon’s reentry, as an Atlantic landing would have taken the craft over the peninsula; however, a Tampa landing in the Gulf saw reentry performed over the open waters.

The physical splashdown as well as descent under parachutes waws not visible from land given the distance to the landing site and nighttime conditions.

After splashdown, safety teams swarmed the spacecraft, confirming it is safe to approach and that the vehicle is not leaking any toxic materials — a standard procedure before clearing personnel to approach the craft and begin recovery operations.

With additional security and Coast Guard assistance promised after the inadequate safety operations with the crewed Demo-2 landing off Pensacola, Florida in August 2020, it is unlikely recreational boaters will be allowed near the craft.

Shortly after splashdown, Dragon will be connected to GO Navigator’s recovery systems and hauled aboard into the ship’s nest where SpaceX personnel will quickly open the capsule’s side hatch and remove the experiments.

Those experiments will quickly be taken to a waiting helicopter, which will immediately fly them to the Shuttle Landing Facility at the Kennedy Space Center, where they will then be taken to the Space Station Processing Facility where science teams will be waiting to receive them and perform immediate post-mission evaluation on the condition of the returned samples.

“The benefit of being able to observe the science earlier is the ability to negate any gravitational effects on the research after it has been in space,” says Jennifer Wahlberg, Kennedy Space Center utilization project manager.  “The scientists will take a quick look to get initial results and then ship [the experiments] back to their home bases.”

The return of Dragons so close to their home port not only enables this rapid access to scientific experiments, but also permits the rapid return of the vehicle to its refurbishment facilities at the Cape Canaveral Space Force Station.

After being hauled aboard GO Navigator, the Dragon capsule and ship will head south, rounding the tip of Florida before trekking north to Port Canaveral, where Dragon will be offloaded and taken for post-flight deservicing and refurbishment to prepare for its next flight to the International Space Station.