More than four and a half years after arriving in orbit of Jupiter, NASA’s Juno mission continues to excel at its primary goal of answering outstanding questions about the Jovian system, something highlighted in a recent science release detailing a much drier region of the planet’s upper atmosphere than previously predicted.

Meanwhile, with the spacecraft in good condition, NASA has officially granted a second — and final — mission extension to the probe until September 2025.  However, the agency does not expect Juno to survive to this new end-of-mission target due to the extreme radiation environment it operates within.

It was 7 December 1995.  A 34 kilogram probe hurtled through the upper reaches of Jupiter’s atmosphere.

For 57 minutes and 36 seconds, the probe transmitted its data in one scientific grasp that saw it purposefully fall deeper and deeper into the giant planet’s atmosphere, eventually being crushed by the immense pressures.

The region it was descending through was not as expected.  It was drier and windier, surprising scientists who concluded based on the available evidence that the probe had coincidentally entered the Jovian atmosphere in a relatively rare hot spot. 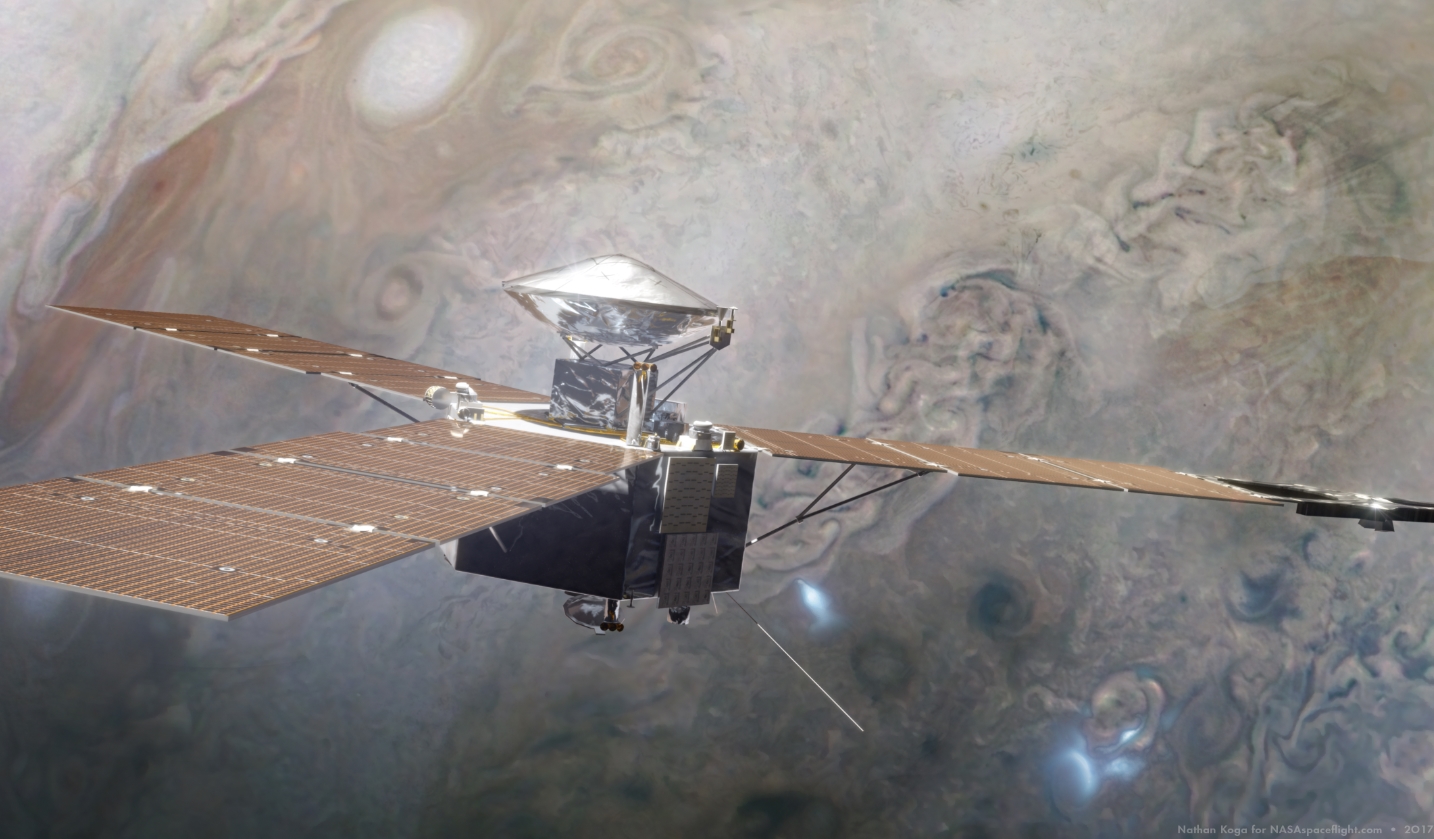 Modeling of Jupiter’s atmosphere suggested that the hot spot encountered by Galileo’s atmospheric probe was one of a few relatively rare such pockets that exist within an otherwise moist band of convection circling the planet just north of its equatorial region.

New data from the Juno spacecraft, however, shows the exact opposite – that these hot spot regions are actually the predominant environment and the moisture pockets are more rare.

But what could be pulling all of that moisture from the atmosphere in that convective band?

To fully understand the context of the new understanding provided by Juno’s data, we must return to a previous Jovian mystery that Juno was instrumental in providing more data for in 2020: that of the case of missing ammonia in the upper parts of Jupiter’s atmosphere.

NASASpaceflight reported on that discovery, an article which can be found here.  The crux of the missing ammonia conundrum was eventually indicated to be a result of ammonia mixing with water in the upper atmosphere and freezing.

Once frozen, the water-ammonia solution (⅔ water and ⅓ ammonia), called “mushballs” by the science team that identified them, are then dragged down into the atmospheric depths as they add more and more mass by pulling (freezing) more and more water and ammonia out of the atmosphere.

While that previous study focused solely on the missing ammonia’s link with shallow lightning events that had been seen on Jupiter but otherwise could not be explained, it crucially revealed an ammonia transportation property previously unknown in Jupiter’s atmosphere.

And that is the key to explaining a potential mechanism behind why this convective band just north of the planet’s equatorial region is so dry when previous modeling shows it should have more moisture than it does.

New high-resolution data of the convective band obtained from Juno’s microwave radiometer revealed that the hot spots are associated with breaks in the planet’s cloud deck and flanked by clouds and active storms fueling shallow lightning.

“High up in the atmosphere, where shallow lightning is seen, water and ammonia are combined and become invisible to Juno’s microwave instrument.  This is where a special kind of hailstone that we call ‘mushballs’ are forming,” related Tristan Guillot, Juno co-investigator at the Université Côte d’Azur in Nice, France.

“These mushballs get heavy and fall deep into the atmosphere, creating a large region that is depleted of both ammonia and water.”

The mission’s second extension comes after a NASA independent review panel approved the mission team’s proposal and concluded it met both scientific and monetary merit to proceed.

The balance between wanting to extend every mission when possible and the funding realities — and defunding of other areas to execute such an extension as the case sometimes is — can be delicate.

Juno has been measuring the abundance of water in Jupiter's atmosphere: https://t.co/LmmNKIcUA0

For Juno, that included a detailed evaluation of the current state of the vehicle’s electronics and systems and how they have been affected so far by the intense radiation environment at Jupiter.

In this case, the independent review board concluded that “The spacecraft remains healthy, with no major hardware or operational issues.”

Should Juno begin to succumb to the effects of Jupiter’s radiation, the mission team will execute the planned end-of-mission operations before control of the spacecraft is lost.

In order to abide by planetary protection protocols for Jupiter’s numerous moons, including Europa which likely harbors a subterranean ocean, the craft will be purposely sent into Jupiter’s atmosphere — thereby preventing accidental contamination of one of its potentially life-harboring moons.

These types of destructive planetary protection end-of-mission events have been seen previously with Galileo at Jupiter and Cassini at Saturn.

Part of the Juno mission extension will allow for flybys of three of four Galilean moons: Io, Ganymede, and Europa, searching for changes since the Voyager missions in the late-1970s and Galileo’s multi-year mission at the planet from 1996 to 2003.

Juno will also make more observations of Jupiter itself, including an exploration of its ring structure and characteristics.

Managed by NASA’s Jet Propulsion Laboratory (JPL), the mission is part of the New Frontiers program and was launched on 5 August 2011 from Space launch Complex-41 (SLC-41) at the then-named Cape Canaveral Air Force Station on a United Launch Alliance Atlas V 551 rocket.

At the end of the launch, the Centaur upper stage placed the spacecraft into an Earth escape trajectory that sent it into a heliocentric orbit around the Sun.

Based on mission design, Juno did not take a direct route to Jupiter, instead utilizing an orbit that brought it back to Earth on 9 October 2013 for a gravity assist that imparted additional velocity to the craft — thereby altering its orbit to go further into the solar system and intercept Jupiter.

With Juno’s insertion into orbit, it became the second spacecraft to orbit the largest planet in our solar system.

The first was Galileo, launched on Space Shuttle Atlantis in October 1989.  Galileo entered orbit of Jupiter on 8 December 1995 and functioned until its end-of-mission death-plunge into the planet on 21 September 2003.

After reaching this initial 53.4-day orbit, Juno conducted its first close-approach flyby of Jupiter in August 2016.  Originally, the plan was for the spacecraft to alter its orbit again during the second close approach in October 2016.

The burn would have placed Juno into its planned 14-day primary science orbit; however, that did not go according to plan. 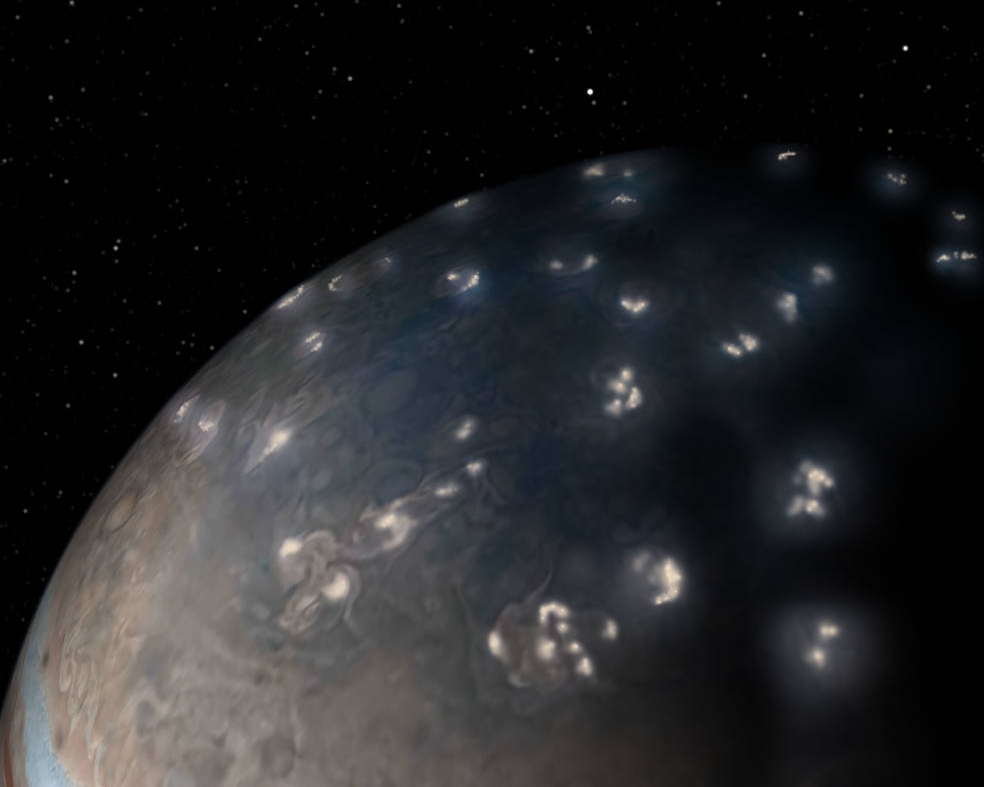 On 14 October, just prior to the orbital maneuver, an error arose regarding the helium check valves on Juno’s primary engine.

The mission team concluded it was too risky to ignite the engine and decided instead to leave Juno in the 53.4-day orbit and perform the mission from there and accept any potential loss to science goals in favor of still having a spacecraft for the mission — something igniting the engine might have precluded.

At that time, the mission’s planned end was in July 2018.

In June 2018, the mission was formally extended to July 2021. The second extension lasts until September 2025.