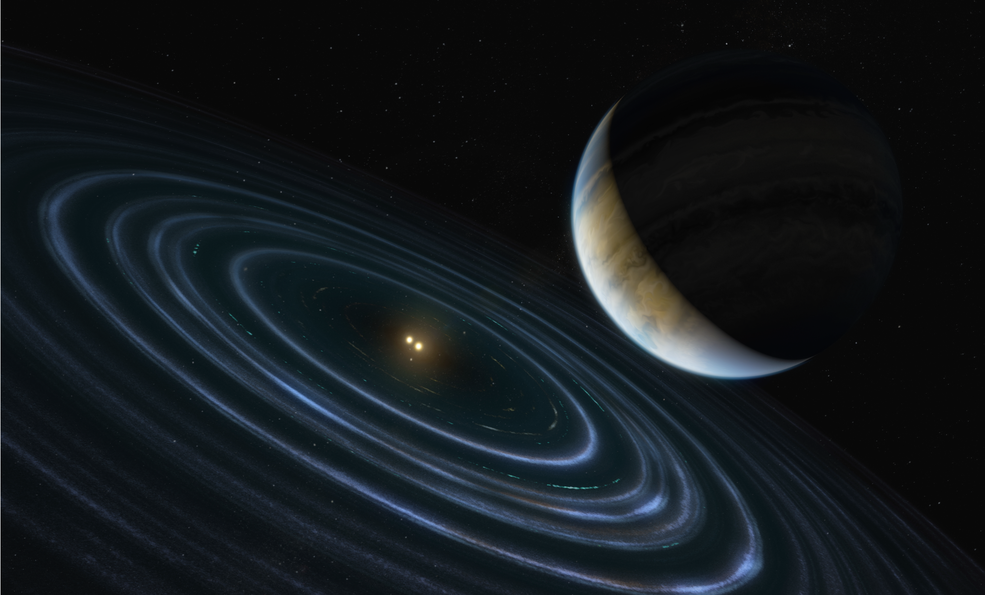 The Hubble Space Telescope has successfully measured the highly eccentric and distant orbit of an exoplanet circling a double star system 336 light years from Earth. The new exoplanet information is potentially important much closer to home as scientists search for the proposed Planet Nine in our solar system.

Meanwhile, NASA has selected four small astrophysics mission concepts for further study as part of the experimental Pioneers program, which seeks SmallSat or balloon missions with $20 million cost caps that will give early-to-mid-career scientists an opportunity to lead their own mission.

First discovered in 2013, the Jupiter-like HD 106906 b exoplanet is 11 times Jupiter’s mass and exists in a relatively young star system that is only 15 million years old.

The exoplanet orbits two stars and is presently 109.4 billion kilometers (or 730 Astronomical Units (AU), with 1 AU equaling the average distance between the Earth and the Sun) from its hosts in a highly elongated and inclined orbit relative to the system’s plane.

In order to determine the exoplanet’s orbit, scientists needed extraordinarily precise measurements of the exoplanet’s motion — which would be incredibly difficult to detect given its slow speed.  More so, at least 14 years of motion data would be required to make a proper estimation.

The only telescope capable of performing such observations was Hubble, the impressive archive of which provided the 14 years of data needed.  The exoplanet requires approximately 15,000 years to complete one, highly eccentric and inclined orbit (tilted 21° from the system’s debris disk). 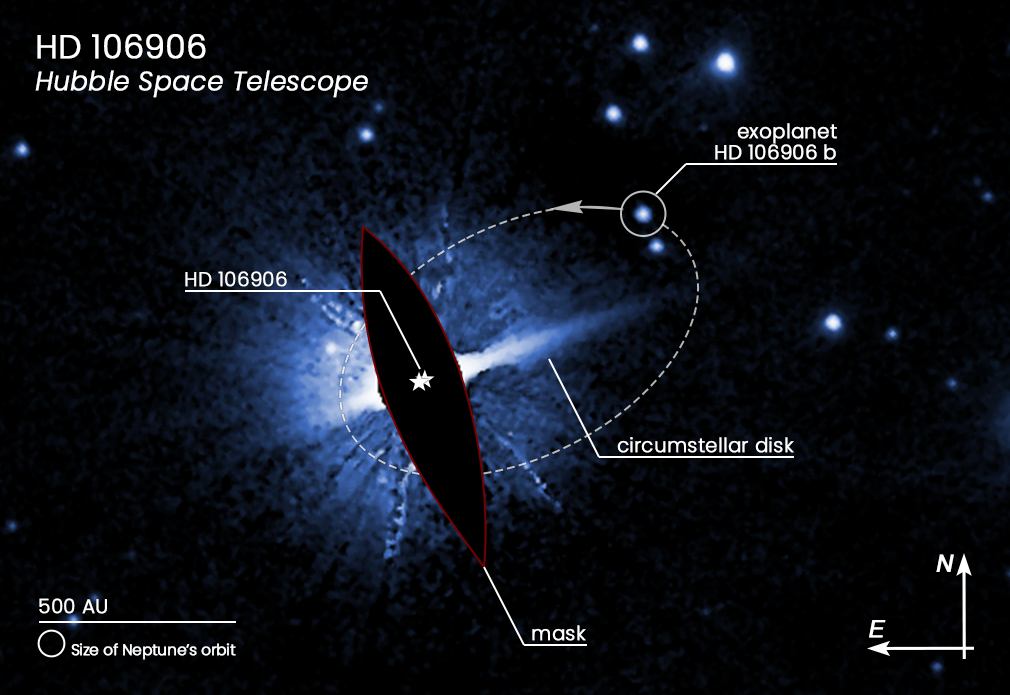 The new orbit data obtained from Hubble observations lends support to the theory that the disk’s asymmetrical shape is likely a result of gravitational pulls and tugs from HD 106906 b.

The question then arose: where did this exoplanet come from? Large gas giants do not form that far from their host stars, as the planetary disks they accrete from are not dense enough to allow their formation.

Based on evidence collected in the intervening years since its discovery, the most likely hypothesis for the exoplanet’s evolution involves it forming much closer to its host stars, inside of the currently observed debris disk.

Drag from the protoplanetary disk gradually caused the planet’s orbit to decay (just like atmospheric drag decays the orbits of objects around Earth) toward its host, eventually passing close enough to them that it was accelerated to just barely the escape velocity of the dual star system.

Two to three million years ago, when the exoplanet was near its current orbital apastron point, two passing stars (HIP 59716 and HIP 59721) came within 3.3 light years of the exoplanet, nudging it just enough to slow its velocity below that needed to escape and send it into the eccentric and inclined orbit seen today.

HD 106906 b in its inclined orbit relative to the plane of its twin-star host system. Credit: NASA, ESA, and M. Kornmesser (ESA/Hubble)

It is the combination of the exoplanet’s perturbation of its system’s debris disk and its likely formation within the system itself that makes HD 106906 b of prime interest for scientists looking much closer to home in the outer reaches of our solar system.

There, a grouping of rocks known as extreme Trans-Neptunian Objects (eTNOs) are in very similar, highly eccentric and inclined orbits; a potential explanation for this is a proposed ninth planet that is 5 to 10 times the mass of Earth and 2 to 4 times its radius.

Several proposals for where Planet Nine — if its existence is confirmed — came from have been discussed, including its formation with the other planets and ejection to its current location by encounters with the gas and ice giants, its capture from another solar system, and the unlikely but possible natural formation in its current location.

Regardless, the planet’s existence would explain several oddities in the outer solar system; however, attempts to find it have thus far proved inconclusive.

What makes HD 106906 b so intriguing is that it appears to prove, with the information gathered thus far, that large planets not only form very quickly within young solar systems but can be ejected and stabilized to the distances observed in a relatively short time period as well.

The calculated orbit of the proposed Planet Nine in relation to the solar system’s inner/outer planets and associated eTNOs in eccentric orbits. (Credit: CalTech)

If nothing else, the existence of HD 106906 b lends evidence that the ejection hypothesis for the potential Planet Nine is at least possible — as is at least one method by which Planet Nine could have encountered the gravitational influences of passing stars that stabilized it and allowed it to settle into its orbit with an eccentricity between 0.2 and 0.5.

Furthermore, HD 106906 b’s perturbational influence on its neighboring debris disk results/is resulting in far-flung objects in increasingly eccentric orbits… like those eccentricities seen in our own solar system with the eTNOs — for which Planet Nine is a potential explanation.

Potential new missions to understand other secrets of the universe

Just as the Hubble telescope looked outward from Earth during the campaigns that gathered the data to determine the exoplanet HD 106906 b’s orbit, so too might a potential future NASA mission study exoplanets in near-by star systems.

That SmallSat flight is one of four proposed mission concepts now under consideration by NASA that could have rather large impacts on the field of astrophysics.

Speaking to the selection of the four concepts that are part of the agency’s Pioneer program, Dr. Thomas Zurbuchen, associate administrator of NASA’s Science Mission Directorate, said: “The principal investigators of these concept studies bring innovative, out-of-the-box thinking to the problem of how to do high-impact astrophysics experiments on a small budget.”

“Each of the proposed experiments would do something no other NASA telescope or mission can do, filling important gaps in our understanding of the universe as a whole.”

The four proposed missions are Aspera, Pandora, and Starburst (all SmallSat missions), and PEUO a balloon mission into Earth’s upper atmosphere.

Aspera would study galactic evolution via ultraviolet observations to examine not the galaxies themselves, but the hot gases in the space between them (the intergalactic medium) and how those gases flow inward and outward from various galaxies.

Pandora, the exoplanet mission, would study a total of 20 stars and their accompanying 39 exoplanets in both the visible and infrared spectrums and would seek to better understand how starlight affects the measurement of exoplanet atmospheres, an outstanding issue in determining the potential habitability of worlds beyond our Sun’s influence.

Starburst, on the other hand, would seek to study high-energy gamma rays created by the mergers of neutron stars, which has only ever been observed once before and from which heavier elements, like platinum and gold, are formed.

The one non-satellite mission is PUEO, a balloon flight that would lift off from Antarctica to detect signals from ultra high-energy neutrinos — particles that contain valuable information about the processes governing the creation of black holes and neutron star mergers.

As part of the Pioneers program, such missions are not allowed to exceed $20 million in cost.

“We don’t know if there is great astrophysics that can be done in a $20 million satellite, but we challenged the community and they sent in a lot of innovative proposals,” said Paul Hertz, director of NASA’s astrophysics division.  “Now, we’re excited to see if they can deliver.”