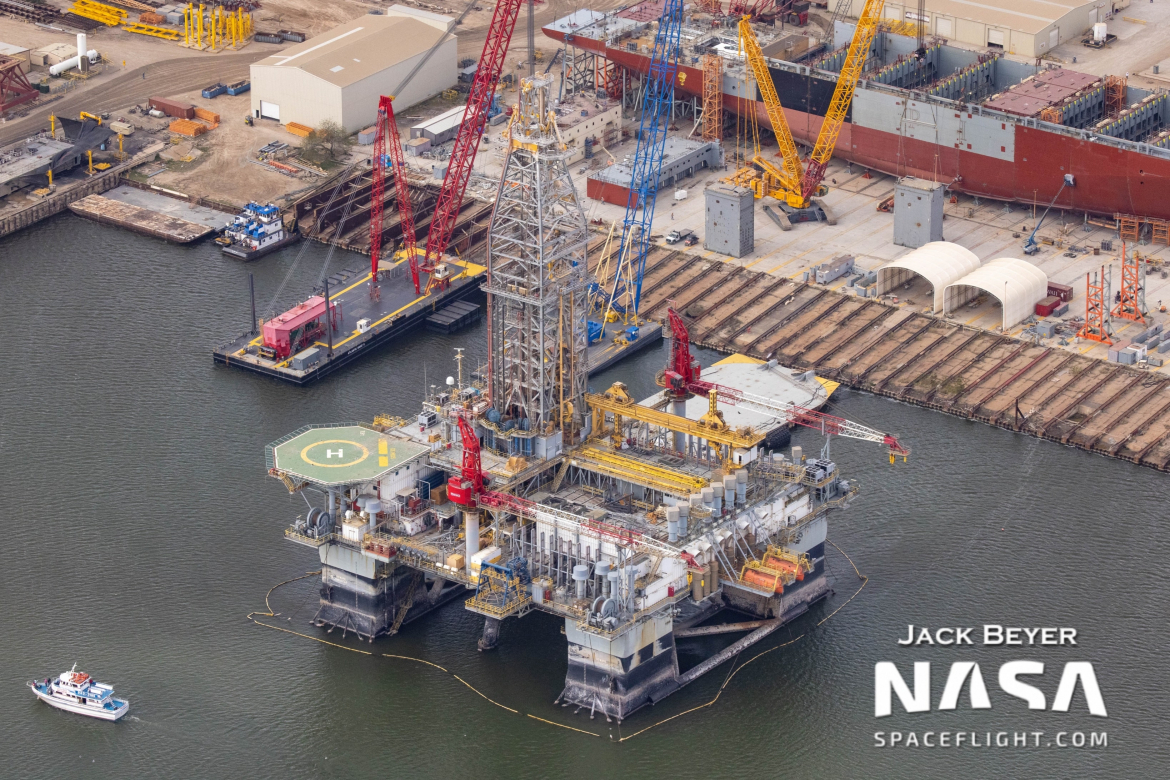 SpaceX has acquired two former oil drilling rigs to serve as these floating spaceports. Named Phobos and Deimos, after the two moons of Mars, they are currently undergoing modifications to support Starship launch operations.

SpaceX has long been hinting at future floating launch and landing sites for their Starship launch system. The super heavy lift launch vehicle will have a large blast danger area and pose noise concerns if launched frequently near populated areas. Therefore, sea launch platforms will play a key role in the launch cadence SpaceX plans to reach with Starship, including on-orbit refueling flights for deep space missions and transportation from one place to another on Earth.

Job postings by SpaceX have indicated that work on offshore launch platforms has begun in Brownsville, Texas, near their Starship manufacturing and launch facilities in Boca Chica.

Positions included crane operators, electricians, and offshore operations engineers, and several of the job listings specified that the position was part of the company’s Starship program. Job descriptions for these positions included responsibilities like “designing and building an operational offshore rocket launch facility” and required the “ability to work on an offshore platform in Brownsville, Texas.”

I've been exploring around the Port of Brownsville while waiting for Starship testing and found an oil rig that appears to be named Deimos, after one of the moons of Mars! Based on job postings and @elonmusk's tweets, I'm willing to bet that SpaceX is involved. @NASASpaceflight pic.twitter.com/zhTOGNnZKd

The Port of Brownsville is home to a handful of oil drilling rigs, as drilling operations are regularly conducted in the Gulf of Mexico. One rig in port was photographed by NASASpaceflight before and after a sign with the name Deimos was added in recent months.

Photographs of the same rig showed that it was previously named ENSCO 8500, owned and operated by offshore drilling company Ensco Rowan PLC.

And there she is, the other SpaceX Oil Rig, Phobos, that will be used as a floating spaceport for Starship!

The road to Mars runs through Pascagoula, Mississippi. pic.twitter.com/Jv5H8kK7kJ

Lone Star was incorporated in June 2020, just before the two rigs were purchased, and a principal of the company is Bret Johnsen, who is also the CFO and President of the Strategic Acquisitions Group at SpaceX.

SpaceX CEO Elon Musk had tweeted that “SpaceX is building floating, superheavy-class spaceports for Mars, moon, & hypersonic travel around Earth” the same month that Lone Star was incorporated. It appears that Lone Star Mineral Development LLC is a subsidiary of SpaceX.

Following up on @thejackbeyer's find, I can confirm that Deimos and Phobos are the names of two oil rigs purchased by SpaceX – likely for conversion to support Starship operations.

ENSCO 8500 and ENSCO 8501 were the previous names of the rigs. They are nearly identical twins.

SpaceX’s job posting for crane operating positions in Brownsville mentioned Seatrax S90 cranes by name as one of the types an operator would be using. This same type of crane is the primary model used on the ENSCO 8500 and 8501 series rigs.

The Phobos rig was seen via satellite imagery in the Port of Galveston on January 13, 2020. Galveston is near Houston, Texas, to the northeast of Brownsville and Boca Chica.

The idea for offshore launch and landing facilities was first presented officially by SpaceX in 2017, when Elon Musk revealed Starship’s “Earth to Earth” transportation plan.

Launching cargo and passengers on suborbital flights around Earth requires operating loud launch vehicles from locations accessible from major cities. Thus, the spaceports would be placed far enough offshore to mitigate noise from Starship’s Raptor engines as well as the sonic booms created by landing stages, both the Starship spacecraft and the Super Heavy booster. 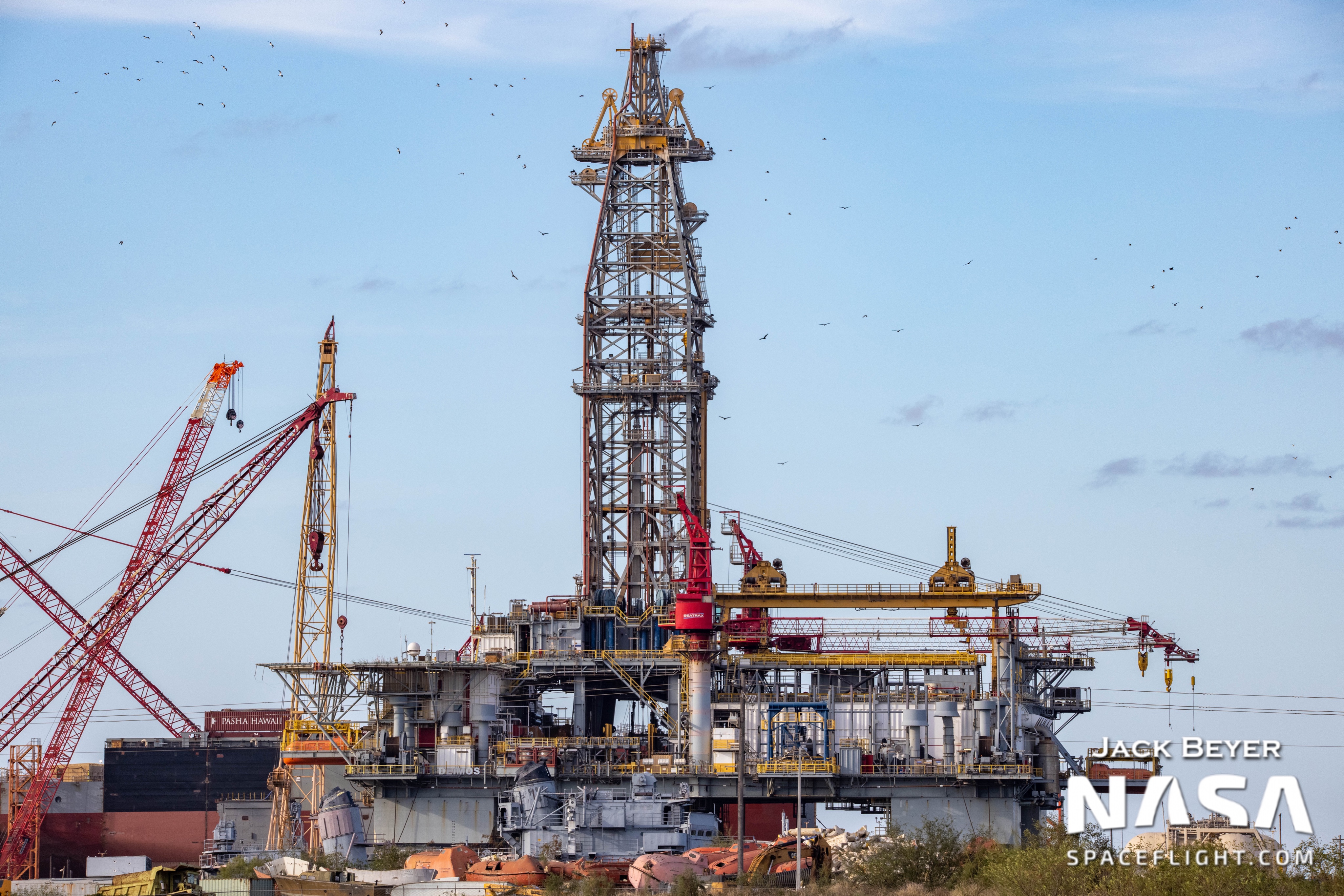 Deimos in the Port of Brownsville – via Jack Beyer for NSF

SpaceX also plans to eventually send multiple Starships to Mars during a single interplanetary transfer window. These flights will be in addition to perhaps hundreds of Starship missions to Earth orbit before carrying any people.

Deimos, one of the oil rigs SpaceX is planning on converting into a floating Spaceport, as seen from the air today, 01-19-21. Its name has been painted on the helipad and lifeboats, so cool. @elonmusk @NASASpaceflight pic.twitter.com/y9VtwJqnFy

All of these factors result in a rapid Starship launch cadence which would be difficult to serve using only the two land based launch and landing sites. Phobos and Deimos will provide two more facilities for this purpose.

Based on the extensive work still needed to prepare the rigs, Phobos and Deimos will likely enter service after the initial orbital flights of the Starship launch system. 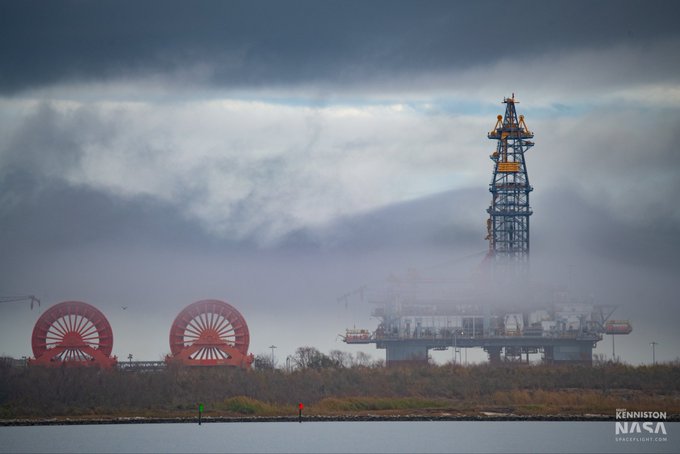 The first orbital Starship launch from Boca Chica could occur in late 2021, pending successful Starship and Super Heavy testing throughout the year.

China opens 2021 with Tiantong-1 launch via Long March 3B

Another One Leaves The Crust begins busy year for Rocket Lab