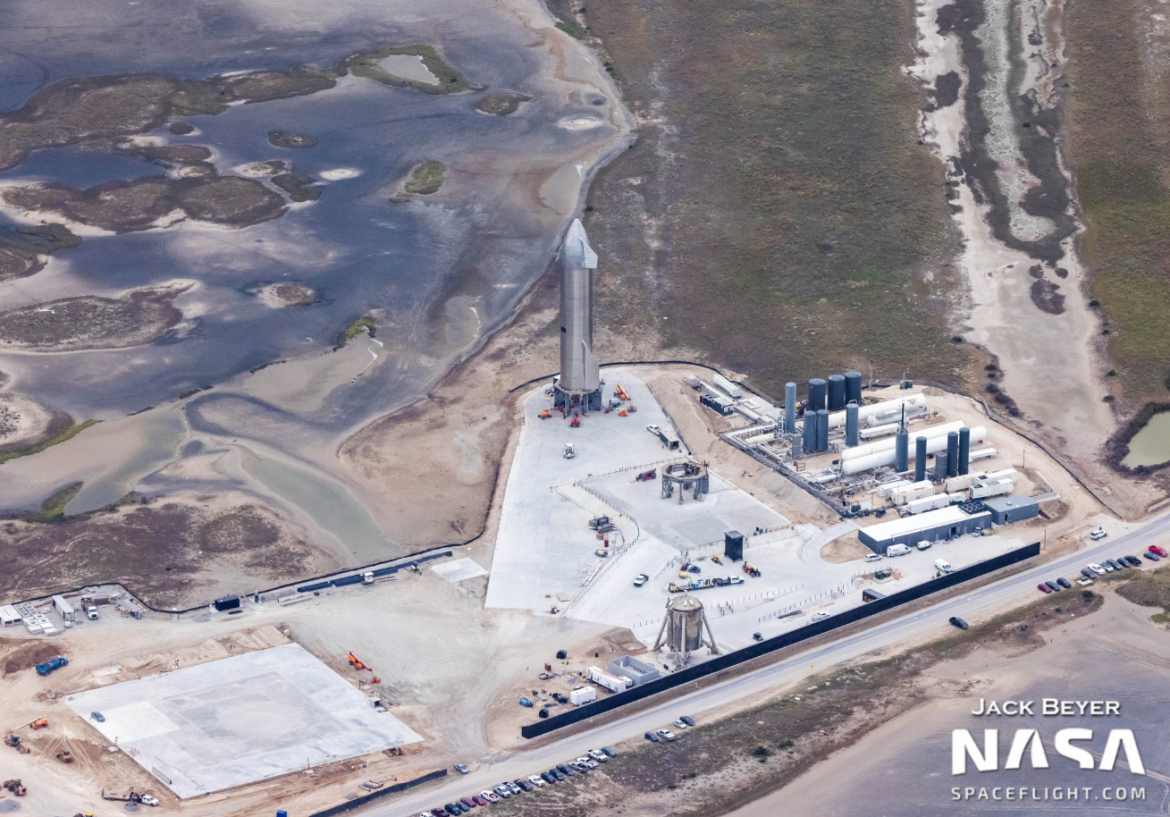 Starship SN9 will have to wait until at least Monday to conduct a 10 kilometer flight, following a continued denial from the FAA approval. The launch attempt comes after a series of Static Fire tests and preparations for its flight from Boca Chica – with the FAA the cause of the latest delay.

Starship SN9 was aiming to provide a streamlined pad flow when compared to the testing undertaken by SN8. With proof testing under ambient and cryogenic conditions completed ahead of a triple Raptor Static Fire test, that goal remained on the cards.

However, during the first Static Fire attempt, SN9’s three Raptors did not fire for the required duration, ultimately demanding the test be a repeat.

With the Tank Farm replenished and the relevant road closures filed, SN9 once again began fueling operations with the expectation this would clear the path for a launch date to be set.

Notably, after the first ignition was observed, the characteristic double vent was absent. As such, SN9 was not pushed into the usual detanking operations following the test.

Instead, SN9 was recycled for another Static Fire test, with Elon Musk noting on Twitter: “Today at SpaceX is about practicing Starship engine starts. Two starts completed, about to try a third.”

This process relates to the opportunity to test “rapid refueling and reuse” as part of Starship’s overall operational design. Elon Musk stated last year that Starship was being built to fly at least three times a day.

With the testing completed, observations were being made concerning two of the firings, which appeared to show only two of the three engines were firing during the second and third tests.

These observations were cross-referenced with the vents that begin spewing vapors from the vehicle’s aft at around T-12 minutes. One of the “tri-vents” appeared to be turned off, pointing to one engine being placed out of use for tests 2 and 3.

Although Elon commented that “All three static fires completed & no RUDs. Detanking & inspections now. Good progress towards our “Hop in & go to Mars!” goal,” it soon became apparent why one of the engines was not firing on the latter two tests.

One of the Raptors, believed to be SN44, suffered unspecified issues during the first hot fire. Subsequent inspections showed that “two of the engines need slight repairs, so will be switched out,” per Elon Musk.

Fears that such a process would push SN9’s launch date back by weeks were soon dismissed by the sight of new Raptors riding to the Launch Pad for swap-out processing.

As suspected, SN44 was the first engine to be removed, with two engines in total swapped out.

Interestingly, the turnaround pace – allowing for the Static Fire test window to be confirmed for Monday (pending a good flow and subject to slips) – was impressive, dismissing concerns of a lengthy delay to the launch date based on previous engine swaps during pre-launch testing.

Looks and sounded very good. Let's hope the data was good to approve launch next week.

A quick look review took place before confirming the test provided the acceptable parameters to press toward launch.

Following the review of the vehicle and engine performance from the test, the path to launch started to become clear.

However, an attempt on Monday scrubbed – likely due to high winds, as much as FAA approval was clearly outstanding based on Elon’s notes on Twitter it was still pending.

With Thursday then the official launch date target, the weather was a consideration, along with the yet-to-be-confirmed FAA approval. However, the latter was expected to be granted based on SpaceX’s confidence to make this attempt official.

Ironically, the weather proved to be no problem, but the FAA caused the scrub by denying permission to launch.

Unlike its aircraft division, which is fine, the FAA space division has a fundamentally broken regulatory structure.

Their rules are meant for a handful of expendable launches per year from a few government facilities. Under those rules, humanity will never get to Mars.

A full countdown was still observed as SpaceX took the opportunity to conduct a dress rehearsal – even if it was likely SpaceX was hoping for a late reprieve from the FAA during the final milestones.

That reprieve failed to arrive in time for a Friday attempt.

Thanks to the numerous tests that have now occurred with Starships, a Static Fire and Launch Countdown timeline has been produced by NSF’s Adrian “Spreadsheet Guy” Beil, allowing for visual countdown clues. 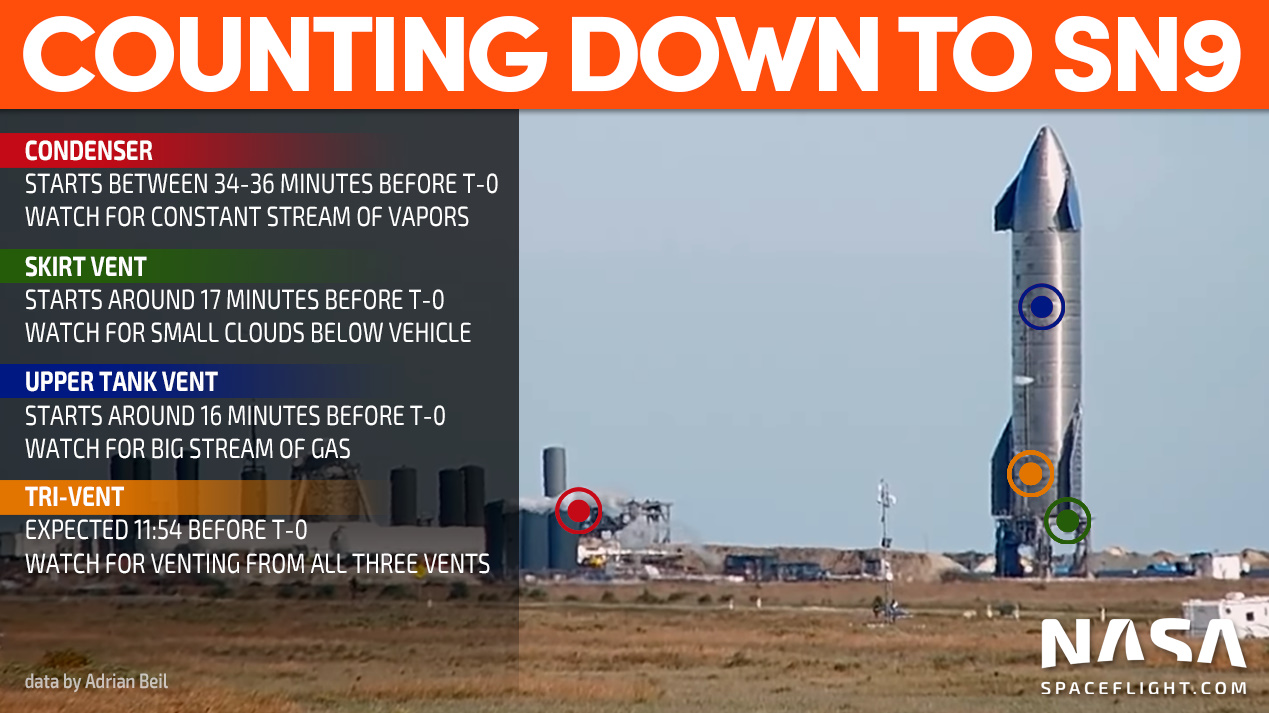 As per the notice to local residents for Static Fire testing, the customary police siren remains the biggest pre-ignition clue, although the siren failed to sound during one of the three Static Fire tests last week.

Also, while it’s aimed to provide a T-10 minute notice, the timing can be off by several minutes, as the local Deputy covers a wide local area.

For launch attempts, the local area is cleared of residents, thus removing the need for a T-10 minute siren.

Starship SN9 will be targeting a near repeat of the SN8 test, albeit this time to land in one piece. However, this flight’s actual altitude target is slightly less than SN8, with a target of 10 kilometers.

SN8 flew to an altitude of 12.5 kilometers – which in itself was a reduction from the original targets. Local weather conditions, specifically upper wind strength, likely played into considerations to reduce the altitude and provide more windows of opportunity for SN9.

This won’t impact the test flight goals, given SN8 successfully conducted numerous first-time milestones, with only the landing burn the item that SN9 will hope to improve upon.

Mitigation of that landing burn issue, which was blamed on the CH4 Header Tank losing pressure, has been implemented into SN9.

Thanks to SN8’s flight, the staggered engine shutdown sequence during ascent will now be expected, as opposed to causing concern. All eyes will be on SN9 ability to conduct a smooth touchdown and land upright on the landing pad.

Although the delay to SN9’s expected launch date can be measured in days, the high production cadence down Highway 4 at the Production Site once again sees several Starships impatiently waiting to take their turn to head to the launch pad. 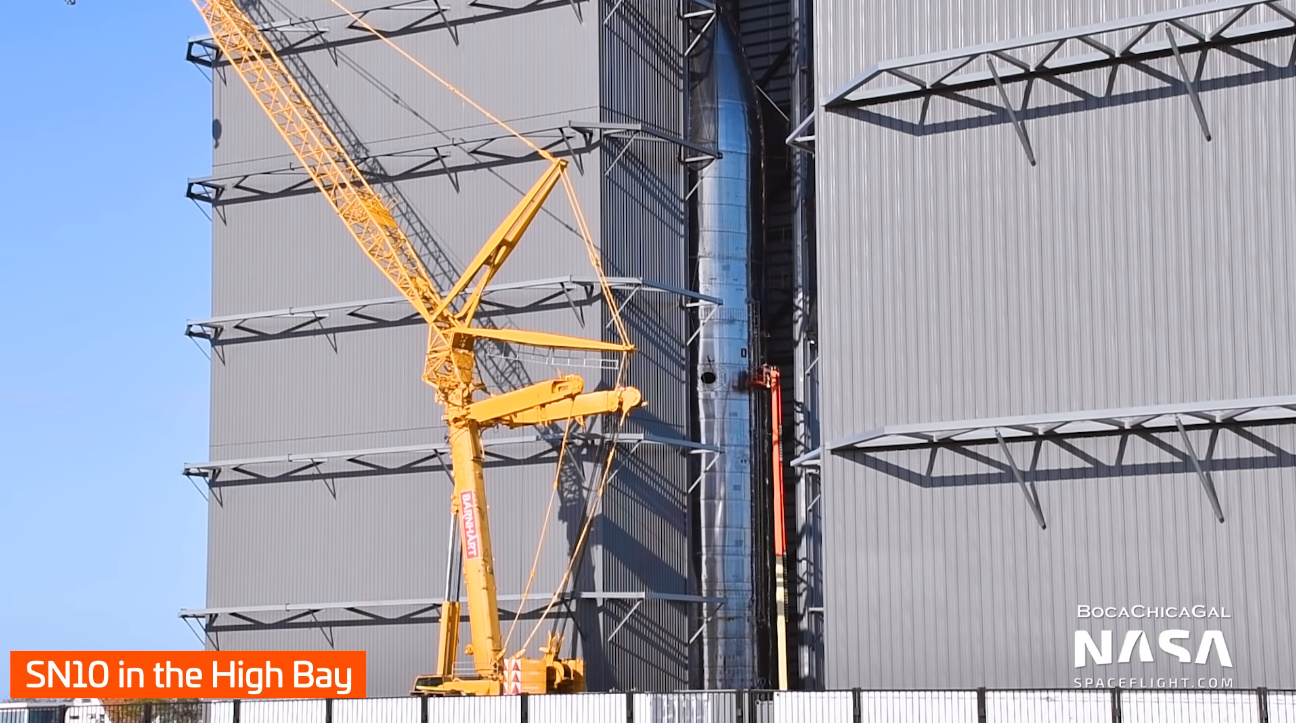 Starship SN10 in the High Bay – via Mary (@bocachicagal) for NSF.

Starship SN10 has long since received her nosecone and aero surfaces during processing inside the High Bay and took a stance to roll to the launch site – which appears to be taking place on Friday.

With two launch mounts and Elon’s noted envisioning of two Starships out at the launch site simultaneously, SN10 could technically take the trip at any time. However, it’s likely SpaceX wants to see SN9 prove its landing ability before risking RUD-related damage to SN10.

Over the Mid Bay, SN11 has completed stacking and is waiting for SN10 to depart to allow for her own nosecone installation.

However, next door to SN11 in the Mid Bay has become an item of interest, with the opening sections of SN12 believed to be staged for stacking. That was before a section marked SN15 was observed by Mary’s (@bocachicagal) camera lens.

With very few labeled sections for SN13 and SN14, there is some potential that SpaceX Boca Chica is looking to advance what will be the next evolution of Starship production techniques, which kick starts with SN15.

No official information on this forward plan has been noted by Elon, although he did “like” the tweet pointing out the promotion of SN15 in the Mid Bay processing flow.

This is a very interesting forward plan for Starship via Mary (@BocaChicaGal).

It is also notable that Mary has spotted more sections for SN16 and SN17 than SN13 and SN14 at the Production Site. 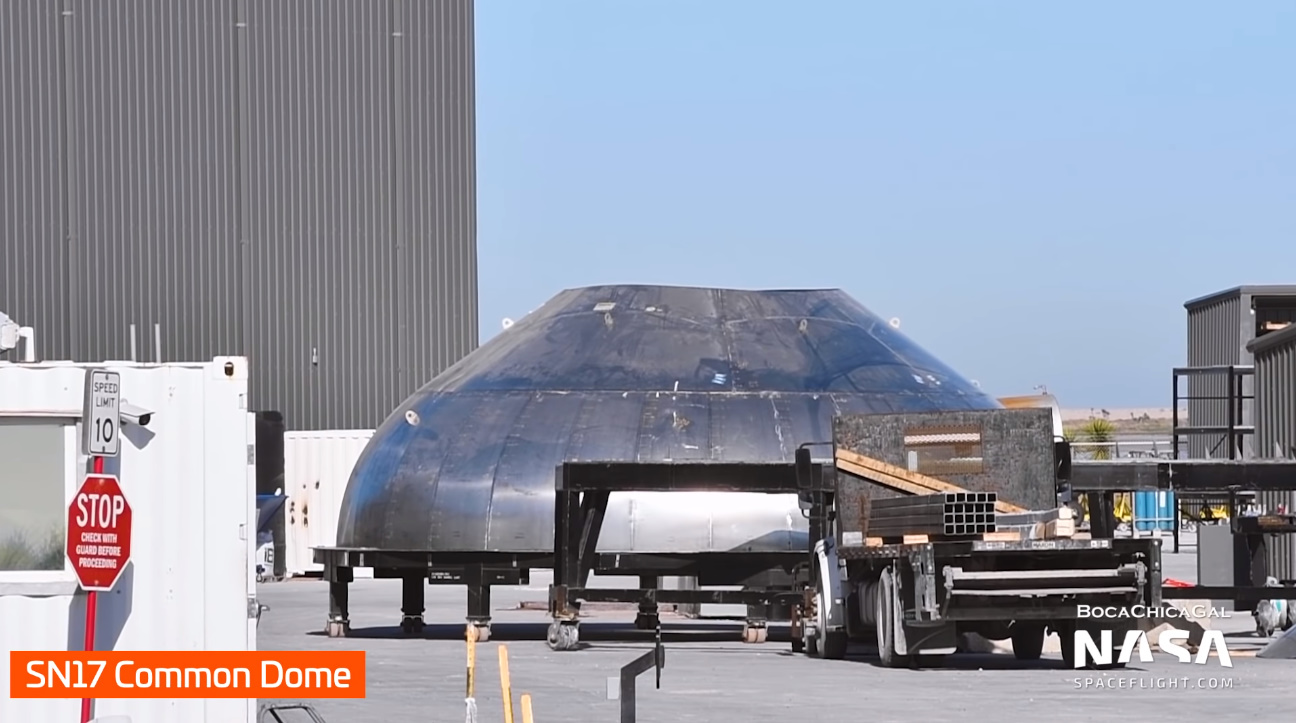 Also relevant to the next evolution with SN15 is a new Test Tank.

Unofficially called SN7.2, this tank will likely be based on some of the 3mm thick 304L stainless steel that is a reduction from the standard 4mm thick steel utilized on the current Starships.

It was rolled out to the launch site last Wednesday and “popped” to the point of overpressure this week.

In total, the amount of construction and activity at SpaceX Boca Chica remains incredibly high, with the Super Heavy prototype BN1 vehicle still waiting to complete stacking operations inside the High Bay, with sections for BN2 already spotted. Simultaneously, its launch site next door to the Starship facility continues to be a hive of activity.

Also, being able to feed this conveyor belt of silvery beasts will be aided by the construction of a propellant production plant at the Old Gas Well Lot site.

Large amounts of hardware have already arrived for assembly, including gas separators and a distiller, which will be used to produce LOX that is currently shipped in by a fleet of road tankers.

Although this facility is being built down the road from the launch site, a pipeline will likely be created between the two facilities, allowing for replenishing the Tank Farm ahead of testing and launches.