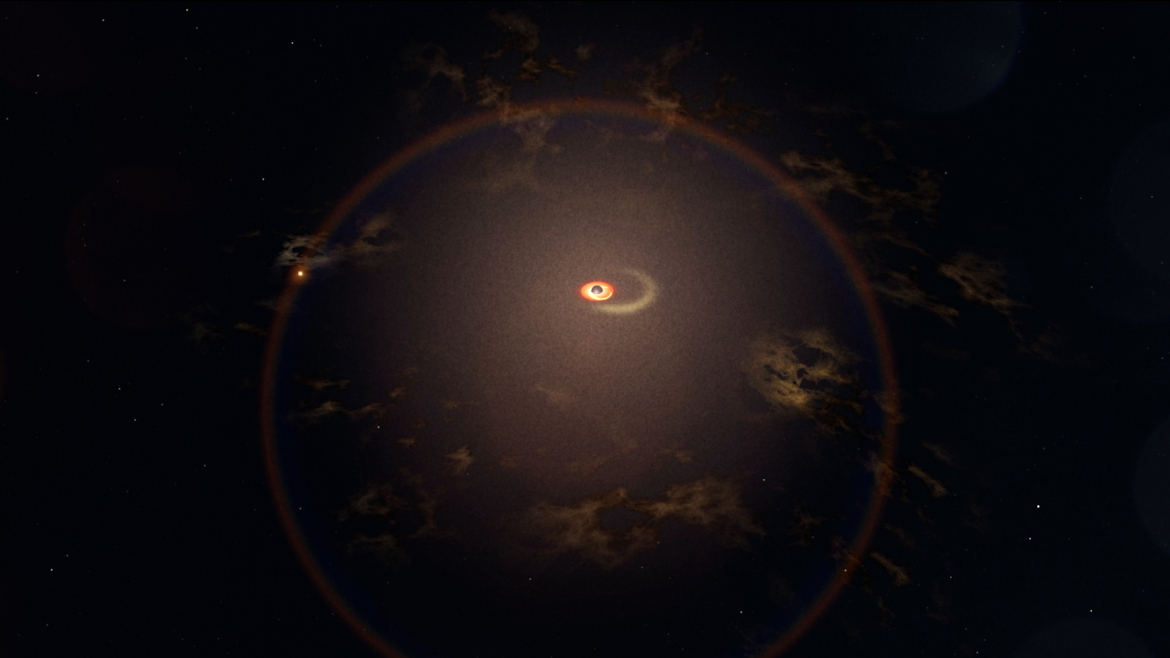 On 14 November 2014, a bright flash flagged the All Sky Automated Survey for Supernovae, or ASAS-SN — a global network of 20 telescopes managed at Ohio State University in the U.S.  The flash originated in galaxy ESO 253-3, located 570 million light-years away.

The sudden burst of energy was examined by astronomers and categorized as a likely supernova and assigned the event designation ASASSN-14ko.  Six years later, Anna Payne, a NASA Graduate Fellow at the University of Hawai’i at Mānoa, discovered it was something much different.

While sifting through ASAS-SN data on active galactic nuclei, she discovered a previously unnoticed periodic series of bright flares emanating from galaxy ESO 253-3 — repeating in such a way that led directly back to ASASSN-14ko as the point of first detection.

This was not a supernova as first thought, as a stellar explosion would not repeat at all let alone with such regularity as that observed with ASASSN-14ko.

Anna and her team began to study the phenomenon in more detail, as the possibility emerged that they had found a periodic variable active galactic nuclei — a long sought for entity that could, in part, help astronomers better understand some of the processes taking place around supermassive black holes.

An original event repetition calculation of 111.82 ± 1.9 days was derived from the ASAS-SN light curve data.  As more data was analyzed from other sources and missions, including the NASA and MIT Transiting Exoplanet Survey Satellite (TESS), the period was refined to 114.2 ± 0.4 days. 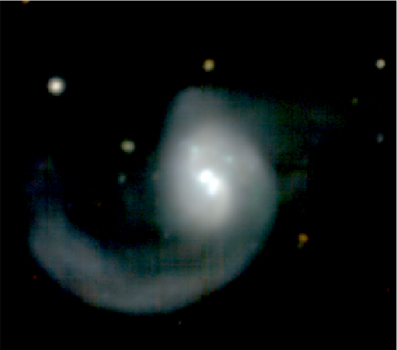 The use of TESS data is not surprising.  The platform is an exoplanet hunting satellite designed to observe large portions of the sky at a single time for month-long periods as part of its initiative to perform an near all sky survey for transiting exoplanets (those that visibly pass across the surface of their host star when observed) close to Earth.

Due to its wide field of view, TESS is ideal for passive monitoring of large sections of the background sky that just happen to lie within its observation field.

This proved useful for Anna and her team as the telescope observed one of the ASASSN-14ko flare events during its observations of Sectors 4, 5, and 6 of the southern hemisphere from 18 October 2018 to 7 January 2019.

From that period, the team was able to extract crucial data from the TESS archive to study the November 2018 flare event from beginning to end.

Because TESS was designed with precision optics to be able to identify the smallest of changes in light curves from thousands of stars simultaneously across a wide field of view, the telescope’s data allowed the team to observe the ASASSN-14ko outburst with unprecedented detail that revealed a very smooth rise in brightness over a 5.6 day period prior to peak.

Likewise, the decline from peak luminosity was extremely smooth.

Crucially, using the calculated repetition period, the team was able to correctly predict flare events on 17 May, 7 September, and 20 December 2020 — all of which were observed.

“We think a supermassive black hole at the galaxy’s center creates the bursts as it partially consumes an orbiting giant star,” said Anna.  “These are the most predictable and frequent recurring multiwavelength flares we’ve seen from a galaxy’s core, and they give us a unique opportunity to study this extragalactic [event] in detail.”

The findings of the study were presented on 12 January 2021 at the 237th meeting of the American Astronomical Society, held virtually due to the ongoing pandemic.

While their paper (which can be found here) is undergoing scientific review, a standard process prior to publication, the team put forth their research that points to three possibilities for what is occurring at the center of galaxy ESO 253-3 with the regularly repeating ASASSN-14ko event.

The first scenario, while possible, carries issues which make it improbable, including that the orbital period identified does not match what the predicted masses of each black hole would have to be.

Solving that issue would either require the binaries to have significantly different masses (something unlikely based on observations so far) or orbital velocities much greater than predicted with those inherent velocity shifts hidden from all observations to date.

The second possibility is for a massive star to be perturbing the accretion disk.  This scenario is more probable than the first, though still has issues based on observations. 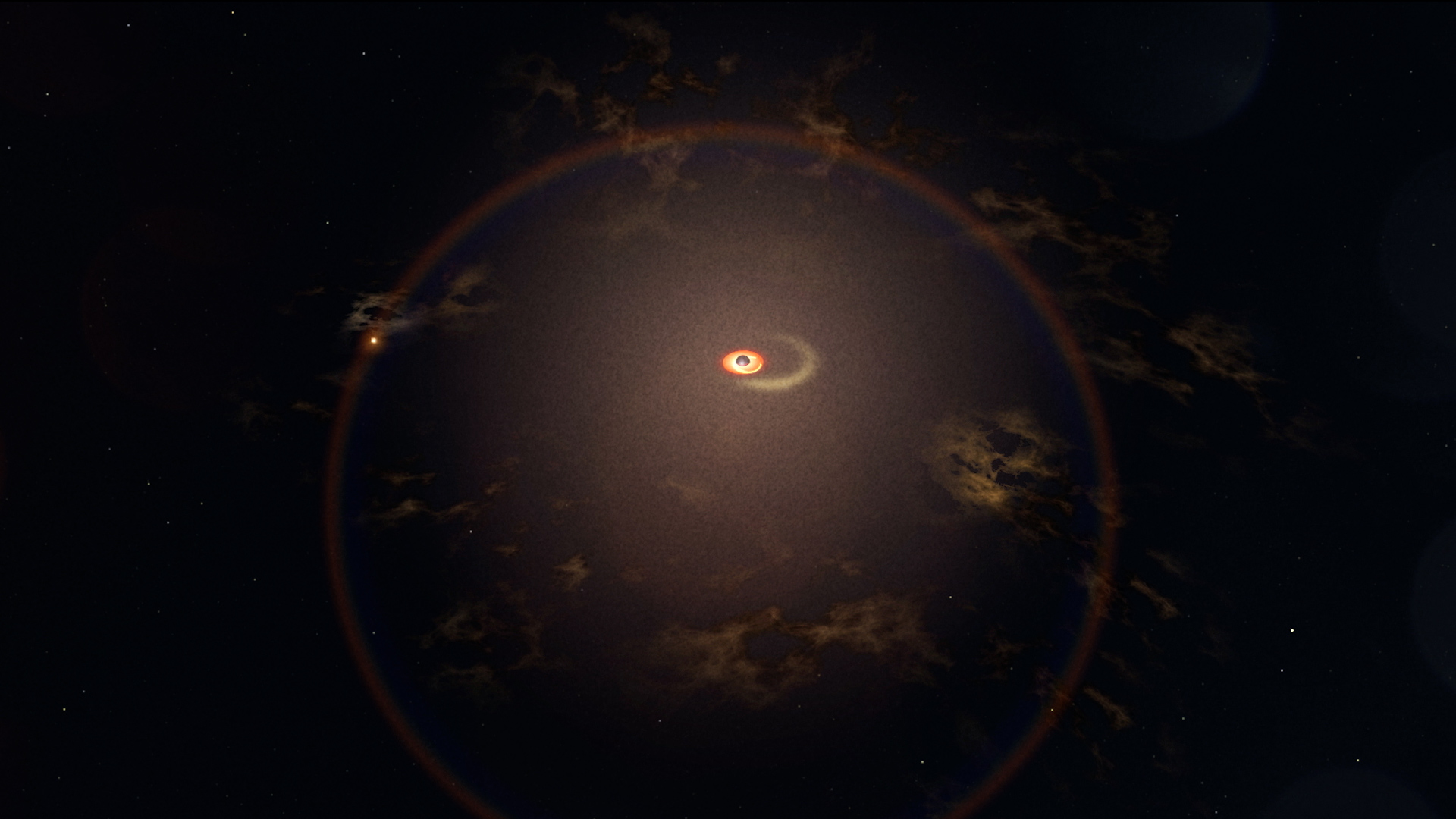 This would mean the orbital period of the star is not 114 days, but rather 228 days, with the flares occurring every 114 days corresponding to the two times per orbit the star passes through the accretion disk.

However, this would mean the orbit would have to be circular in order to account for the every-114-day repetition cycle.

What’s more, the star passing through the accretion disk at two different locations in its orbit would almost certainly produce variations detectable in the data, yet each flare appears relatively uniform going back to 2014.

To partially account for this, not only would the star have to be in a near circular orbit, but it would also have to have a viewing angle that is edge-on; but even then, the team admits it is difficult to reconcile this scenario with the data so far.

Therefore, the teams’ proposed third explanation for ASASSN-14ko is that it is a repeating partial tidal disruption event.

In this scenario, a star 78 million times more massive than the Sun and in a slightly eccentric orbit passes close enough to the supermassive black hole at pericenter (point of closest approach in the orbit) that the gravitational forces of the black hole cause the star to bulge outward, allowing the black hole to steal some of the star’s matter.

This stolen matter (equivalent in mass to three Jupiters) falls inward to the supermassive black hole, creating the bright flares observed every 114 days.

This is known as a partial tidal disruption event.

In this scenario, the star associated with ASASSN-14ko will have more and more of its material lost to the supermassive black hole at each pericenter encounter before it is eventually consumed over successive partial tidal disruption events.

This would explain the similarity in the data of the flares observations over the past six years; but even that still holds questions and mysteries.

Regardless of what the ultimate explanation for ASASSN-14ko is, the event is the type of repeating variable scientists have been seeking for years, and the ultimate goal of being able to make repeated and consistent observations of such an event is proving useful in helping expand understanding of what happens around supermassive black holes at the center of galaxies.

Moreover, the research reported by Anna Payne and her team underscores the interconnected nature of astronomical observations and the potential uses of telescopes — like TESS — beyond their primary mission objectives.