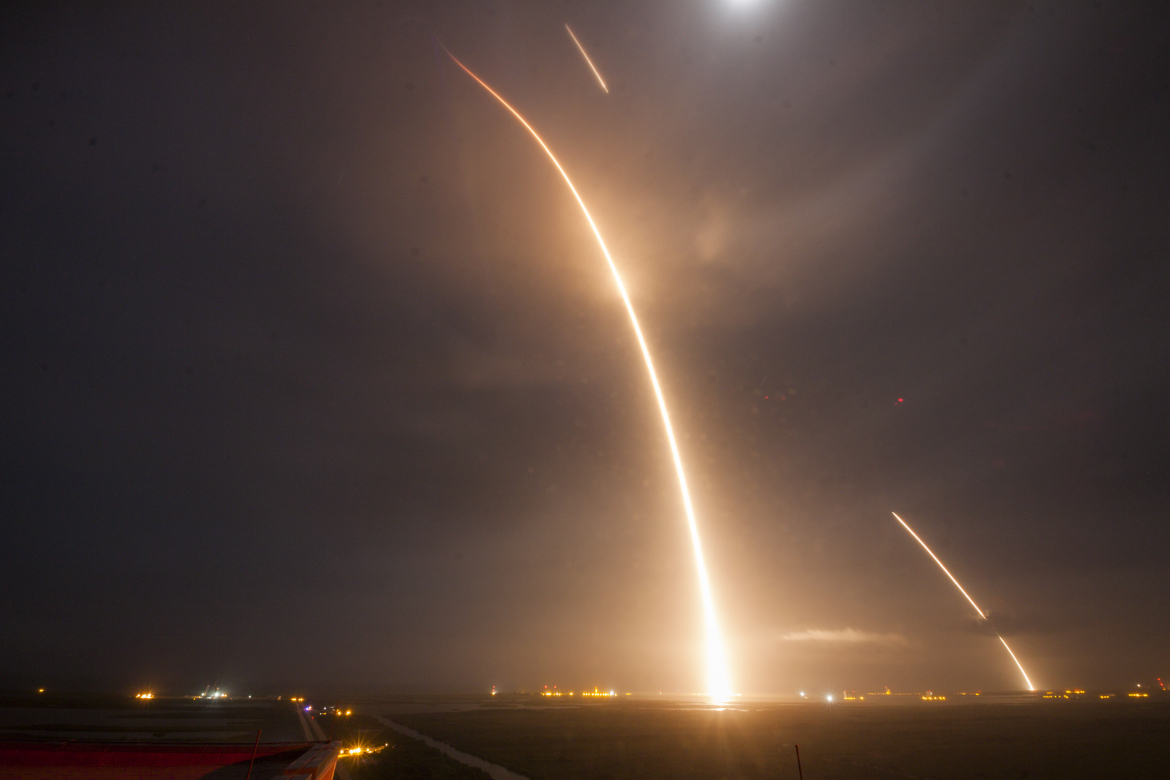 At the 47th Spaceport Summit, formerly known as Space Congress, the Cape Canaveral Space Force Station, Kennedy Space Center/45th Space Wing of the Space Force, and the FAA provided an overview and update on the Florida spaceport’s status and how it is preparing for an even busier schedule than it’s already looking at in 2021.

Part of this discussion surrounded expansion possibilities and restrictions at the Florida launch site and how the spaceport would adopt a more airport-like approach to launch operations.

This year’s Spaceport Summit, conducted virtually due to the ongoing COVID-19 pandemic, has and will feature leaders from numerous space agencies, private companies, and industry providers.

In particular, Kennedy Space Center Director Bob Cabana was joined by Brig. Gen. Stephen Purdy, Director of the Eastern Range and Commander of the 45th Space Wing, as well as Wayne Monteith, FAA Associate Administrator for Commercial Space Transportation and retired Brig. Gen. of the Air Force, where they discussed the Florida spaceport’s current status and future.

Overall, 2020 was an impressive year, even with the pandemic alternating numerous plans and delaying many projects in the need to keep workers safe.

According to Brig. Gen. Purdy, last year saw 297 requests to use the Eastern Range, resulting in 225 approvals that led to the commencement of 55 countdowns that resulted in 32 launches.

Two launches were human flights, representing the first crewed test flight (SpaceX Demo-2) off the Eastern Range of a new spacecraft since STS-1/Columbia in April 1981 and the first operational flight carrying humans (SpaceX Crew-1) since the retirement of the Space Shuttle in 2011. 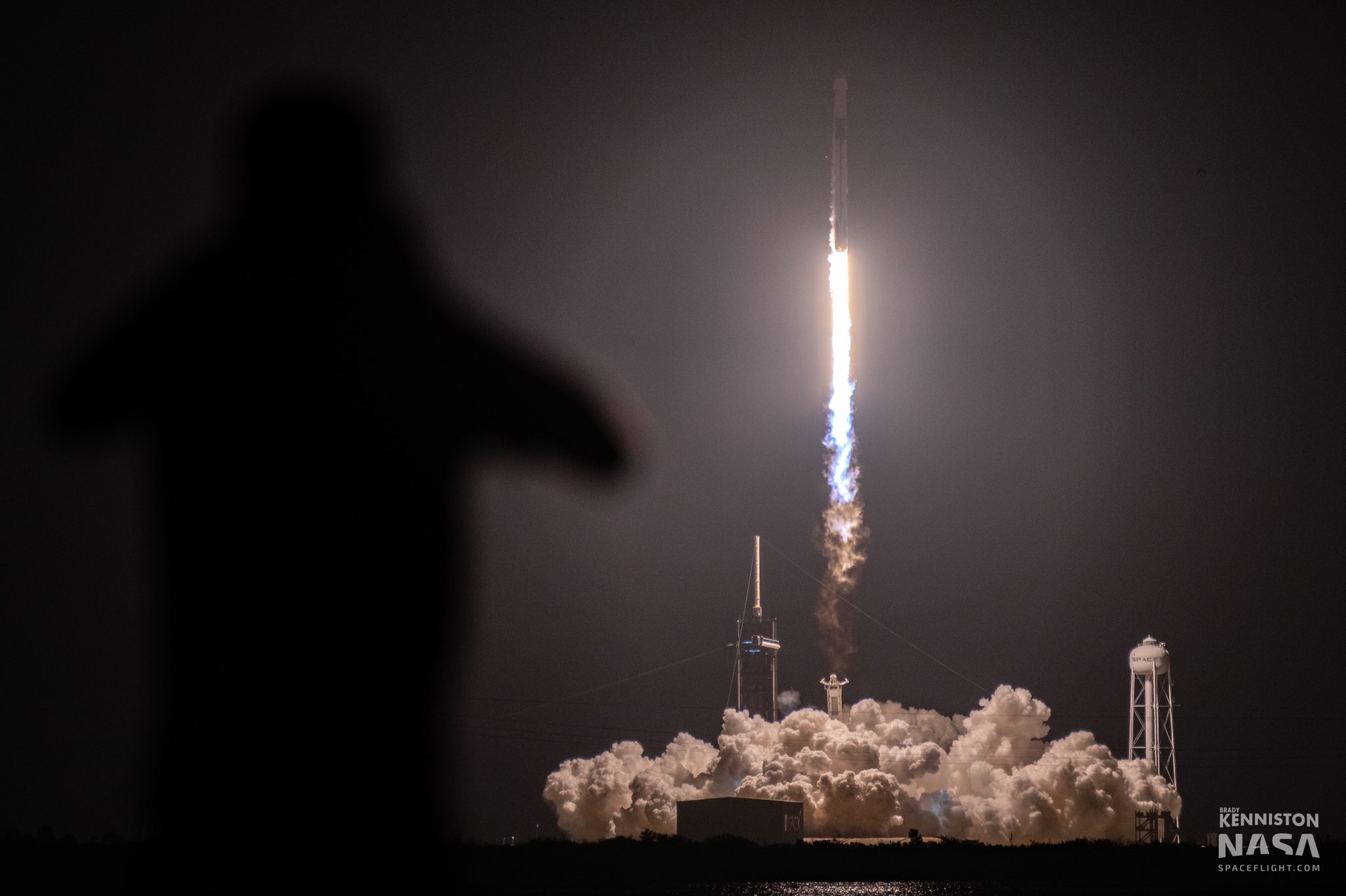 Brady Kenniston, self-portrait, documents the launch of SpaceX’s Crew-2 mission with four astronauts onboard from LC-39A at the Kennedy Space Center in November 2020. (Credit: Brady Kenniston for NSF)

Of the satellites orbited from Florida, the vast majority (833) were Starlinks, with a notable non-Starlink being SAOCOM-1B — which became the first satellite in nearly 51 years to be placed into a polar orbit from Florida after the U.S. Air Force, now Space Force, reopened the southern polar launch route.

Over at the Kennedy Space Center, while a large amount of the visible work last year involved numerous launches of SpaceX Falcon 9s off LC-39A as well as arrival and buildup of flight hardware for the first SLS mission which will launch from neighboring LC-39B, the multi-user spaceport saw work with more than 200 partners across more than 150 multi-user agreements.

Those figures underscore in large part the often non-visible work that opening the Kennedy Space Center to multiple users has enabled, as it is not just launch and stacking facilities that companies find useful.

Moreover, last year’s 32 launches off the Eastern Range advanced the 45th Space Wing’s goal of supporting 48 missions per year — which they had planned to reach this year and might come close to achieving based on the currently understood launch manifest.

But along with the spaceport’s growth and increased launch cadence comes new challenges.

The entire Eastern Range is looking at a projected cadence of 60 launches per year in the near future, with that number increasing to upwards of 96 launches a year by 2030, if not more.

To this end, Mr. Cabana, Brig. Gen. Purdy, and Mr. Monteith discussed the “range of the future,” including a pivotal swing toward a more airport-like model of launch support that would routinely be capable of supporting one to two launches per day.

The 45th Space Wing has approved the launch of two SpaceX Falcon 9 missions carrying hundreds of Starlink satellites. Working extremely close with our FAA, USN, and international partners, Starlink L-17 and Starlink L-18 are approved to launch at 0536L and 0119L, respectively.

That type of rapid launch support was recently seen when the Range was able to reduce turn-around time between launch from 36-48 hours down to just 4.5 hours — as was approved in February 2021 for two Falcon 9 launches of Starlink internet satellites.

However, the Range is not equipped from an asset or personnel perspective to routinely support such a cadence at this time.  Instead, those kinds of short turn-arounds are special considerations and cases, with the Range’s more realistic current ability being one launch a week.

To the FAA’s role in this expansion, Mr. Monteith acknowledged the streamlining of commercial space-FAA processes for launch licenses, both for operational and test missions.

Mr. Monteith also reinforced his portion of the FAA’s directive to properly regulate the U.S. commercial spaceflight industry while still fostering its growth and development without unduly slowing it down — something the new streamlined processes Mr. Monteith himself has championed and is overseeing the implementation of are designed to address.

However, expanding to an airport-like model doesn’t just have its aerial challenges.  The animals that call the Kennedy Space Center, which sits on the Merritt Island Wildlife Refuge, home will also have to be considered during upcoming expansion opportunities. 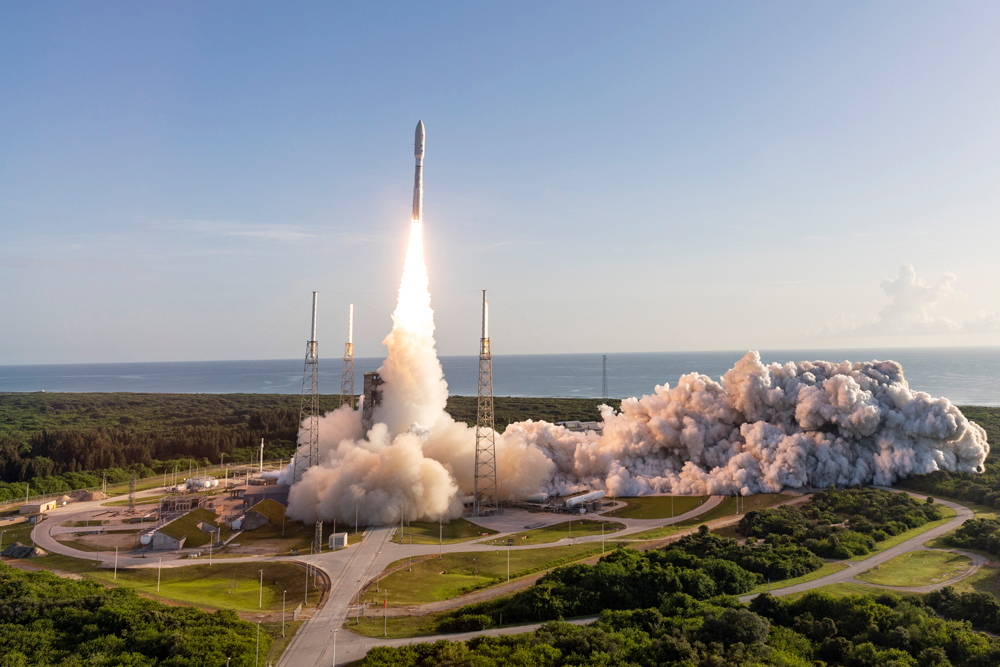 An Atlas V rocket launches the Perseverance rover to Mars from Florida in July 2020. (Credit: NASA)

Kennedy Space Center director Bob Cabana noted that areas of the Refuge’s wetlands are off limits for development in order to protect the 14 endangered species that safely in the protected area.

Additionally, numerous areas on the Center grounds are not suitable for development due to rising sea levels as Earth’s climate continues to warm.

Development, too, will have to meet quantity-distance arcs to ensure that any explosive detonations at newly developed sites will not harm personnel and infrastructure in other areas.

All told, the areas remaining for future development as the spaceport eyes its next phase of evolution span 30.3 square kilometers (or 7,500 acres) of Kennedy Space Center grounds.