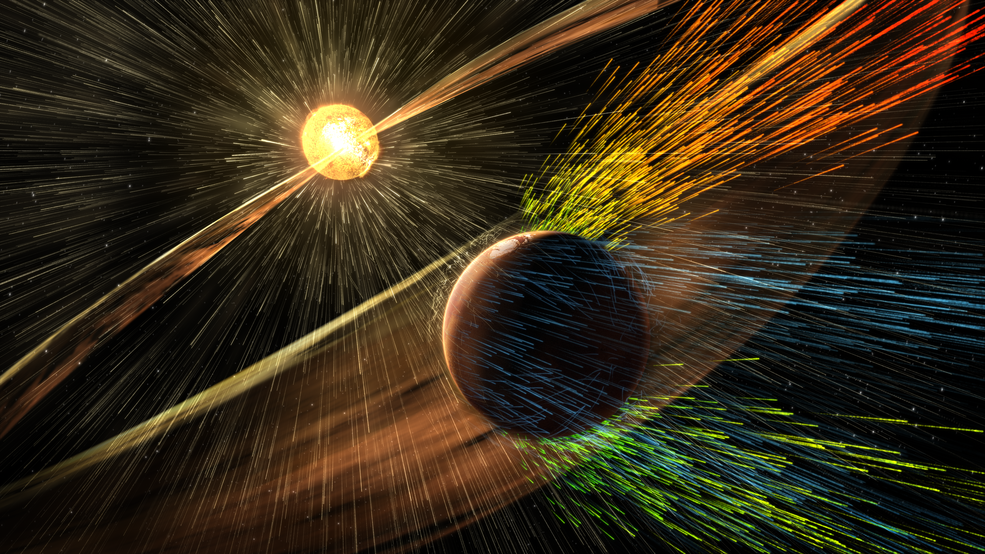 Data from NASA’s Mars Atmosphere and Volatile EvolutioN (MAVEN) spacecraft has revealed the unsurprising — yet previously not searched for — presence of Martian atmospheric ions preserved in the top layer of regolith on the planet’s innermost moon, Phobos.

The announcement comes as an international fleet of Emirati, Chinese, and American spacecraft are set to begin arriving at Mars on Tuesday, 9 February for a variety of orbital and surface missions, with the Emirati and Chinese spacecraft entering Martian orbit while NASA’s Perseverance mission performs a direct entry and landing to Jezero Crater.

Mars is losing its atmosphere to space because of the solar wind.

That is not a surprise; in fact, it’s the principal driving element of the MAVEN mission.

With fairness to Mars, the loss of its atmosphere is not unique.  Such loss is seen throughout the solar system, even here on Earth where a combination of the solar wind and Earth’s magnetosphere carry small amounts of isotopic oxygen away from the planet, with some of it deposited on the Moon.

As previously reported by NASASpaceflight, these deposits of oxygen ions from Earth are trapped by the lunar regolith and thereby preserved — due to the Moon’s lack of atmosphere — for eventual study on how a small portion of Earth’s atmosphere has been lost over time.

In much the same way, the moons of other planets have been used to investigate elements of their host’s atmospheres.

But oddly enough, with all of the missions that have gone to Mars, none have sought to do this at the Red Planet.

Now, that previously uninvestigated process could provide vital information about how Mars’ atmosphere, once thick enough to support a burgeoning planet with liquid water on its surface, has been reduced to just 1% of what it was billions of years ago and how its atmosphere and loss changed over time.

MAVEN, however, was not designed to study Phobos; it was designed to collect data on the Martian atmosphere and its loss to space… a continuous investigation that would provide data on the ions present each of the five times every Earth-day MAVEN passed Phobos’ orbit.

In this case, a dedicated study of Phobos was not required to perform the analysis because the ions present at its orbit would tell scientists which ions were reaching the moon and which ones would be embedded in its surface.

This allowed a team, led by Quentin Nénon of the Space Sciences Laboratory at the University of California, Berkeley, to characterize elements of the Martian atmosphere present in Phobos’ regolith.

Data from MAVEN’s SuperThermal And Thermal Ion Composition, or STATIC, instrument was used to measure the Martian ions’ incoming velocities and mass, and thus their kinetic energy.

This was in turn used to calculate how many are likely to have reached the surface of Phobos and how deeply they would have penetrated the regolith, calculated to be no more than roughly 250 times less wide than a human hair. 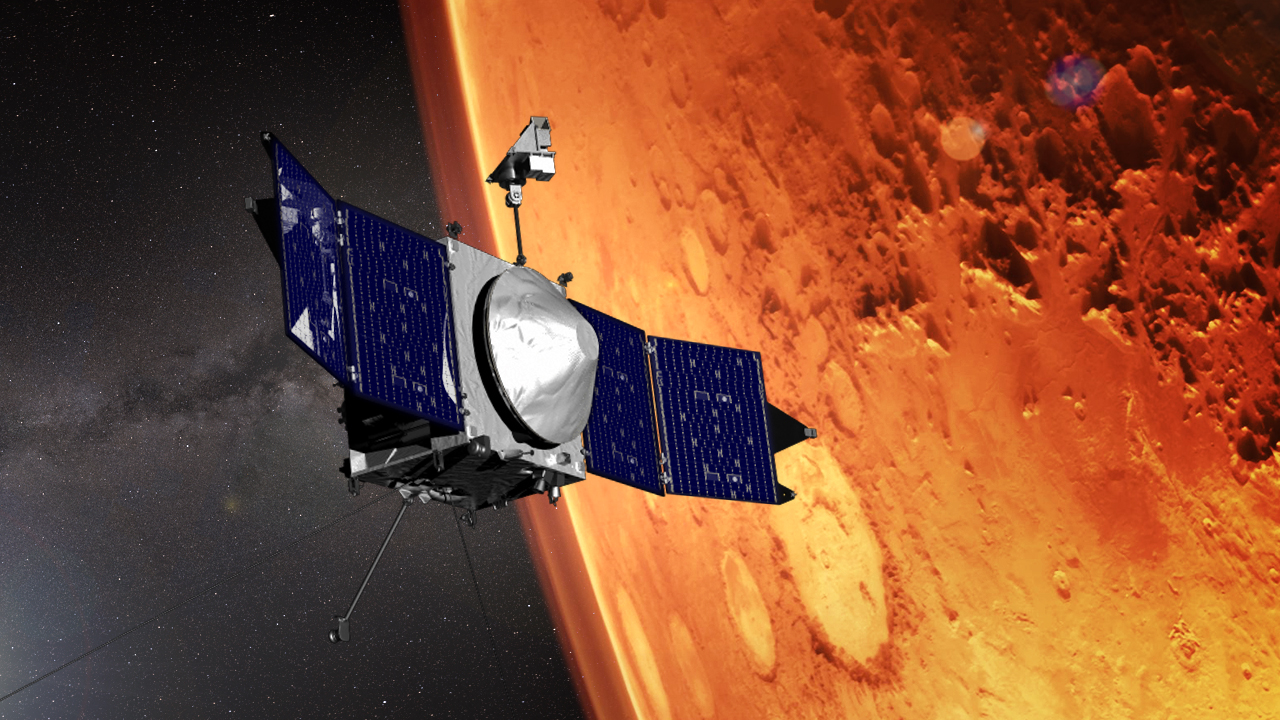 Artist’s impression of MAVEN in orbit of Mars. (Credit: NASA)

The results proved what was largely suspected, that Martian ions were in fact embedded in Phobos’ surface and could be easily characterized if a sample of the regolith could be collected.

And therein lies the true importance of this previously un-searched for piece of Mars’ past: its connection and influence on an upcoming Japan Aerospace Exploration Agency (JAXA) mission in 2024 to send a probe to the surface of Phobos, collect a sample, and return that sample to Earth for analysis.

The mission, called Martian Moons Exploration, or MMX, is designed to examine the geologic composition of the Martian moons to answer the question of where they came from, a hotly debated topic between an in situ formation or a capture of Phobos and Deimos from the asteroid belt.

Regardless, the mission is perfectly suited to prove more scientifically valuable than already designed in that collecting a sample from Phobos’ surface would not just contain information on the moon’s origin, but also contain a billions of years old archive of Martian atmospheric history.

“With a sample from the near side,” Nénon said, “we could see an archive of the past atmosphere of Mars in the shallow layers of grain, while deeper in the grain we could see the primitive composition of Phobos.”

The near side in this case is important, as Phobos is tidally locked with Mars, meaning one side of its surface constantly faces the planet.  In terms of Martian ions reaching its surface, the near side receives 20-100 times more than the far side of the moon.

The study is published in the journal Nature Geoscience.

While the MAVEN spacecraft is designed for its primary scientific mission, it also serves a secondary and vital role as part of a communications relay network in Martian orbit for spacecraft trying to call home to Earth — an element it will put into practice this week for the United Arab Emirates’s Al-Amal probe’s arrival.

Al-Amal is scheduled to begin its Mars Orbit Insertion burn at 15:14 UTC on Tuesday 9 February.  Al-Amal, or “Hope”, was the first of the Mars fleet trio to launch from Earth back in July 2019 and will likewise be the first to arrive.

Like MAVEN, Al-Amal is an orbiter, and the 27-minute Mars Orbit Insertion burn will place the spacecraft into a planned 22,000 x 44,000 kilometer orbit which will see it complete one revolution of the planet every 55 hours.

According to tracking estimates in the absence of official information from China, the Tianwen-1 orbiter/lander duo will follow Al-Amal just hours later with its own Mars Orbit Insertion at 12:01 UTC on Wednesday, 10 February.

If successfully placed into orbit, Tianwen-1 (“Heavenly Questions”) will adjust its orbit over the following two months and prepare for the separation of the lander element of the mission, which would then attempt a descent to the Martian surface in April per the latest reports from Chinese officials.

@MAVEN2Mars is gearing up for all the arrivals at Mars.

First up is @HopeMarsMission which will go into Mars orbit tomorrow (Feb. 9th) @ 8:41am MST. @LASPatCU @CUBoulder @ASU @UCBerkeleyNews are proud USA partners.

One week after Tianwen-1’s expected arrival in orbit, NASA’s Perseverance mission will bypass orbit and slam into the Martian atmosphere for its Seven Minutes of Terror descent, which will see it bleed off all of its launch and interplanetary injection energy through a sequence of aerobraking maneuvers, hypersonic parachute descent, and retropropulsion before finally being lowered to the surface by a skycrane while the landing system performs a hover operation.

This will be the first time both the United Arab Emirates and the People’s Republic of China attempt to place a spacecraft into Martian orbit — a task that is historically difficult to achieve on the first attempt though not impossible as the Indian Space Research Organisation demonstrated in 2014 with the Mars Orbiter Mission.

For NASA, Perseverance will be the 18th Mars mission launched with the express intent of entering orbit or landing on the Red Planet and the fifth rover from the agency following Sojourner, the dual Spirit and Opportunity missions which vastly outperformed their intended 90 day missions at 6 years and 15 years, respectively, and the ongoing Curiosity mission which has been active on the surface since August 2012.