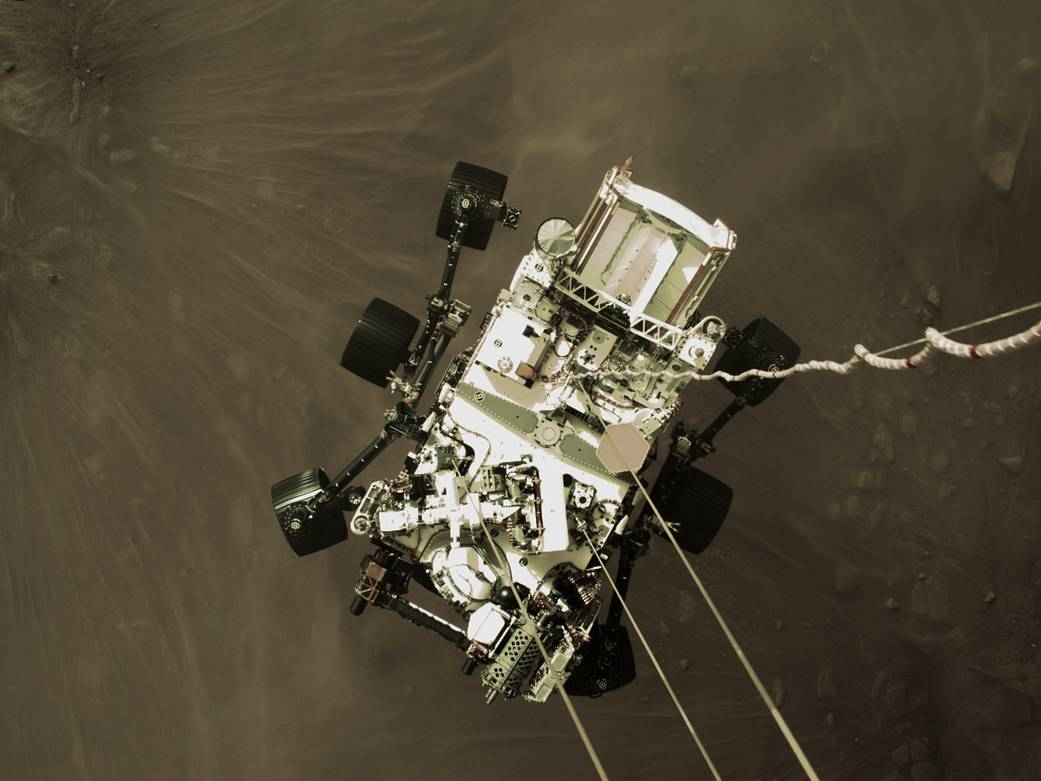 After successfully touching down on the Martian surface on February 18, 2021, NASA teams have started the many checkouts required to begin operating the Perseverance rover. The mission touched down within five meters of their landing target (the landing target that was chosen by the terrain relative navigation system, not the pre-planned estimation), and several minutes later sent its first image of the Martian surface back to Earth.

Perseverance’s first task on the surface of Mars was to deploy its Remote Sensing Mast (RSM). The mast is home to many of the scientific instruments, such as the SuperCam, Mastcam-z, and the environmental sensors (MEDA). The mast is also home to 4 cameras, which began photographing the rover’s surroundings shortly after successful deployment.

Once Perseverance’s mast was deployed, the rover activated its high gain antenna to increase communication bandwidth.

During this process, the rover also began to calibrate all of its cameras. Perseverance has two color calibration target sets, which each contain eight preset known colors. Knowing exactly what these colors should look like allows the NASA teams to ensure the color accuracy of all photos coming from the rover. 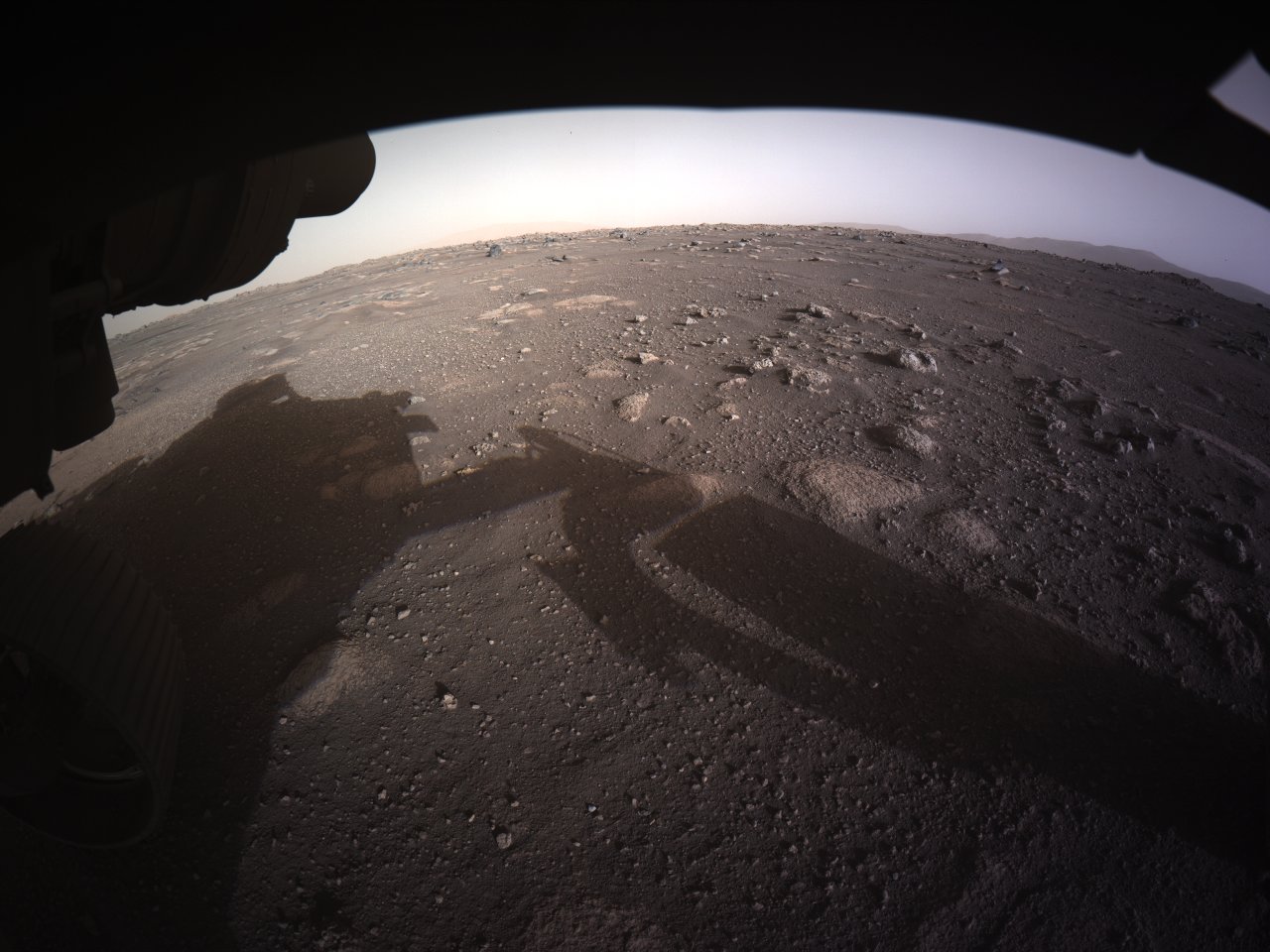 Since landing, Perseverance has also successfully begun communications with NASA’s MAVEN (Mars Atmospheric and Volatile EvolutioN), the Mars Reconnaissance Orbiter (MRO), and Mars Odyssey spacecraft, as well as the European Space Agency‘s Trace Gas Orbiter (TGO). Now that successful communications have been established, the orbiters can be used to relay data to Earth.

NASA has also started the first of many checkouts of the sensors and instrumentation on board Perseverance. So far, all seven instruments have performed their initial checkouts and are performing nominally and as expected. Furthermore, NASA has conducted motion tests of the RSM, which have all been nominal as well.

Since landing, Perseverance has activated its backup computer and has begun the transition from Entry, Descent, and Landing (EDL) software to surface operations software. Both computers, the Linux Operating System, and the photo compression algorithm are all open source.

Changing both computer’s software to the surface operations software will allow for further checkouts of all of the sensors, the robotic arms to be deployed, testing of the “turret” on the end of the arm which contains a drill, camera, and instruments.

Since landing, the Ingenuity helicopter has also gone through initial checkouts, which have passed, and has started charging for its first flight. The time and location of its flight has not been chosen, as teams are waiting to receive more data of the surrounding area.

In the coming weeks, Perseverance will straighten its wheels and perform a short test drive to validate all systems. Following the drive test, the rover will perform more checkouts before getting to work on its scientific research mission.

NASA was able to record video footage from parachute deploy to touchdown, and released the footage on February 22.

NASA was hoping to capture audio of EDL, but a communication error between the device responsible for digitizing the analog signals from the microphone and the computer meant the audio was not recorded.

However, the microphones have been fixed, and NASA has released audio of the rover’s systems operating and the Martian wind. This is the first time that audio has been recorded on the surface of Mars (NASA’s InSight mission measured sound wave vibrations which were converted into audio, but did not directly record any sound).

While it is currently not known how long the microphone will survive, as it was a commercial off the shelf microphone not designed to handle the hostile environment of Mars, teams are hoping to use it to diagnose any problems with the instrumentation.

The first mission objective is a continuation of NASA’s efforts to locate evidence of current or past life on Mars. Perseverance will attempt to identify environments that could have supported life during the red planet’s past.

If Perseverance identifies possible habitable environments, NASA will then search the for signs of current or previous life. The rover will search through regolith, the surrounding environment, and specific types of rock that are known to preserve evidence of life.

Another mission objective of Perseverance is to collect several geological samples and leave them in ultra-clean “caching” tubes on the surface of the planet. Perseverance has 43 sample containers, and NASA hopes to fill at least 20 of them. 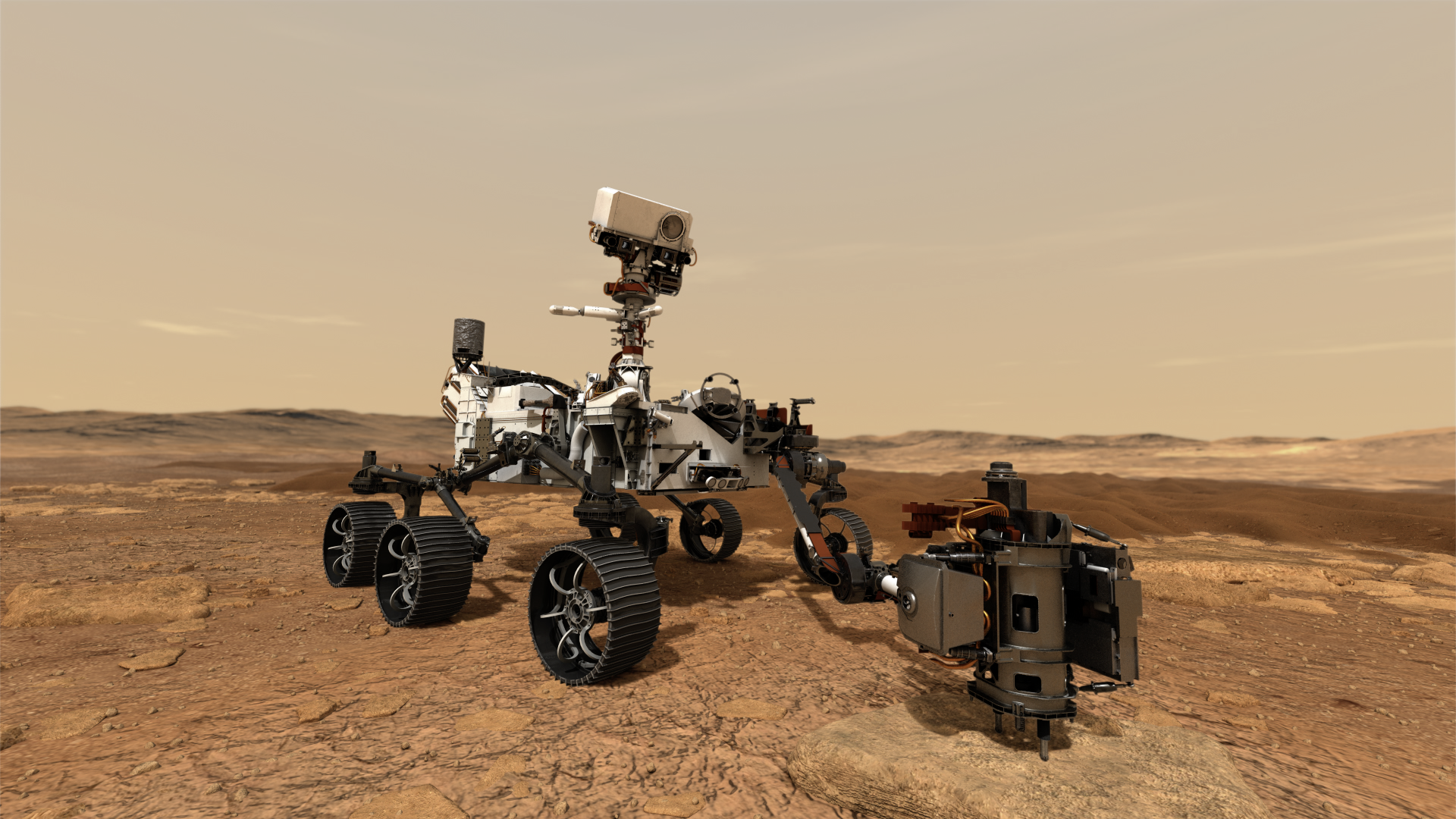 The rover has a drill carousel that contains multiple drill bits to ensure NASA can cache several different kinds of regolith and rocks. Once a bit is selected, Perseverance will use its large arm to drill and collect the sample, and move it into the collection tube. The samples will then be stored on-board the rover to protect them and ensure they are properly sealed.

Once the samples are properly sealed, they will be inspected and stored in the belly of the rover. The samples will remain here until teams at NASA determine where the “sample cache depot” will be located. Perseverance will then deposit the samples at that location (or possibly multiple locations) and ensure that both absolute coordinates and proximity to other landmarks are recorded.

In the future, NASA plans to return these samples to Earth. A follow up mission would need to launch, land on Mars, collect the samples, and launch them into low-Mars orbit. At this point, another mission would collect the Martian samples from orbit, and transport them back to Earth.

The final objective of Perseverance will be to utilize In-Situ Resource Utilization (ISRU) to create a small amount of pure oxygen gas from the Martian atmosphere. The experiment, named The Mars Oxygen In-Situ Resource Utilization Experiment (MOXIE), is a 1/200 scale article of a design that may be used in the future to create oxygen for breathable air or rocket propellant. 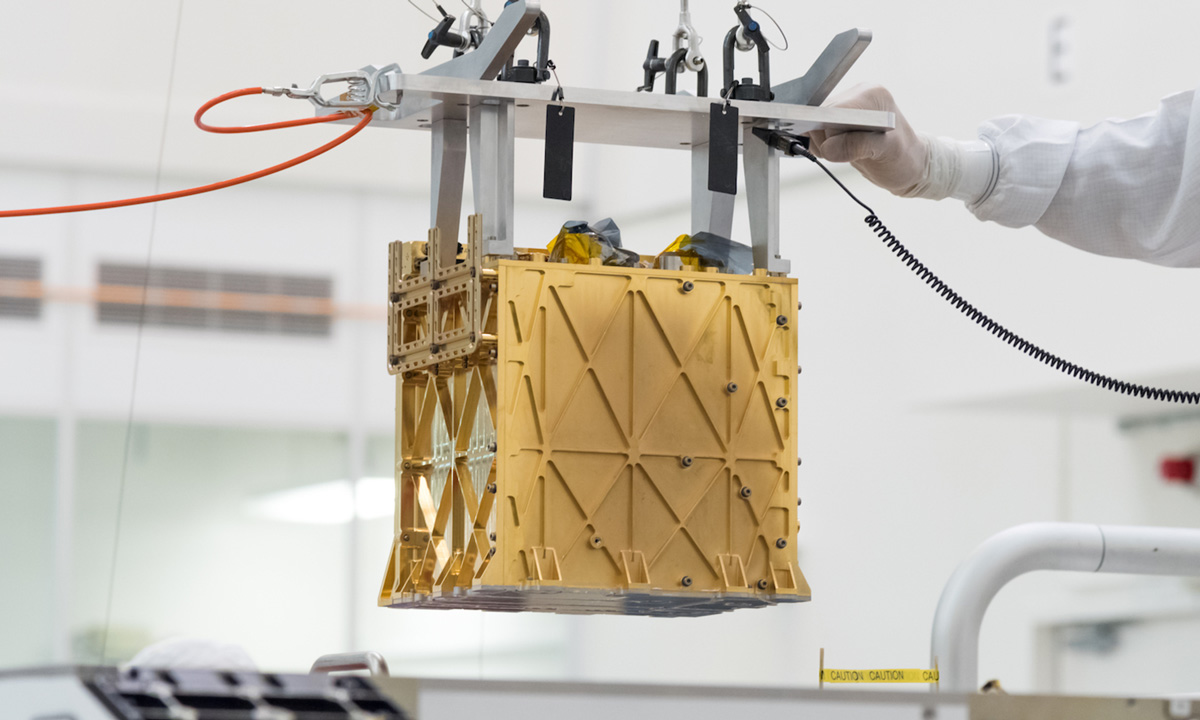 MOXIE will take in carbon dioxide from the Martian atmosphere and produce carbon monoxide and oxygen gas. NASA hopes to produce 22 grams of oxygen gas per hour, with a purity of greater than 99.6%, for 50 sols.

Perseverance is carrying seven instruments, 19 cameras, and two microphones. This is the most instrumentation that has ever been sent to Mars’ surface on a single vehicle.

The first instrument is the aforementioned MOXIE, to be used to produce oxygen gas from the Martian atmosphere.

The second instrument mounted on Perseverance is the Planetary Instrument for X-Ray Lithochemistry (PIXL), which is a fluorescence spectrometer. PIXL will be used to provide a detailed geochemical assessment of the environment, which will be used to help determine if an area was habitable. If PIXL determines the area around Perseverance is or was habitable, PIXL will attempt to detect any signs of previous life and will characterize the geochemistry of the area.

PIXL will also help NASA teams determine where to collect samples for future return to Earth.

The third sensor on the rover is the Scanning Habitable Environments with Raman and Luminescence for Organics and Chemicals (SHERLOC). SHERLOC is an ultraviolet Raman spectrometer that will assess if a sample of regolith would have been habitable and determine the aqueous history of the regolith. The instrument is also going to assess the availability of atoms required for life, and help determine if certain Martian rocks and outcrops show signs of life or show biosignatures. 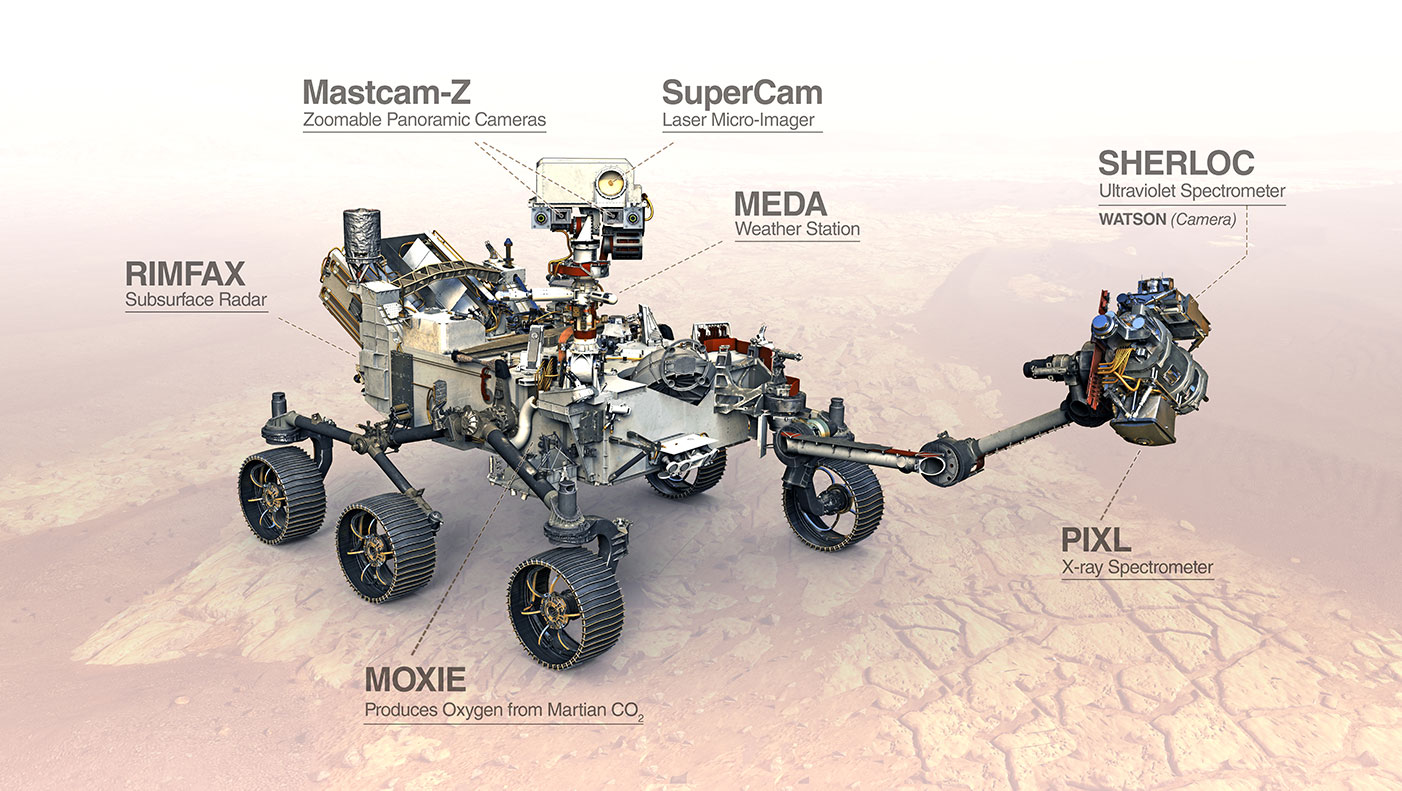 A diagram with the instrument locations on Perseverance – via NASA/JPL

The Radar Imager for Mars’ subsurface experiment (RIMFAX) is the fourth instrument on Perseverance. RIMFAX will use radar to measure the density of the regolith, image buried rocks and meteorites, and detect ice and brine up to 10 meters below the surface.

The fifth sensor on Perseverance is the Mars Environmental Dynamics Analyzer (MEDA). MEDA will measure the surface conditions of Mars, including the wind velocity, pressure, humidity, and radiation levels. MEDA will also measure the shape and size of dust, providing valuable data about Martian dust storms.

Mastcam-Z is a stereoscopic imaging instrument on Perseverance, consisting of two cameras. MastCam-Z will be used to characterize the overall landscape around Perseverance, assess atmospheric conditions, and provide support in rover navigation.

The final instrument on Perseverance is SuperCam, which consists of a camera, two lasers, and four spectrometers. Located on the mast, SuperCam will assist the other suite of sensors in attempting to find organic compounds

SuperCam has a laser-induced breakdown spectroscopy (LIBS) which will shoot a laser (with a wavelength of 1,064 nm) at an area of a couple of square millimeters. The laser will vaporize the rocks in the area, creating a plasma that can be analyzed with the spectrometers to determine the elemental composition of the regolith.