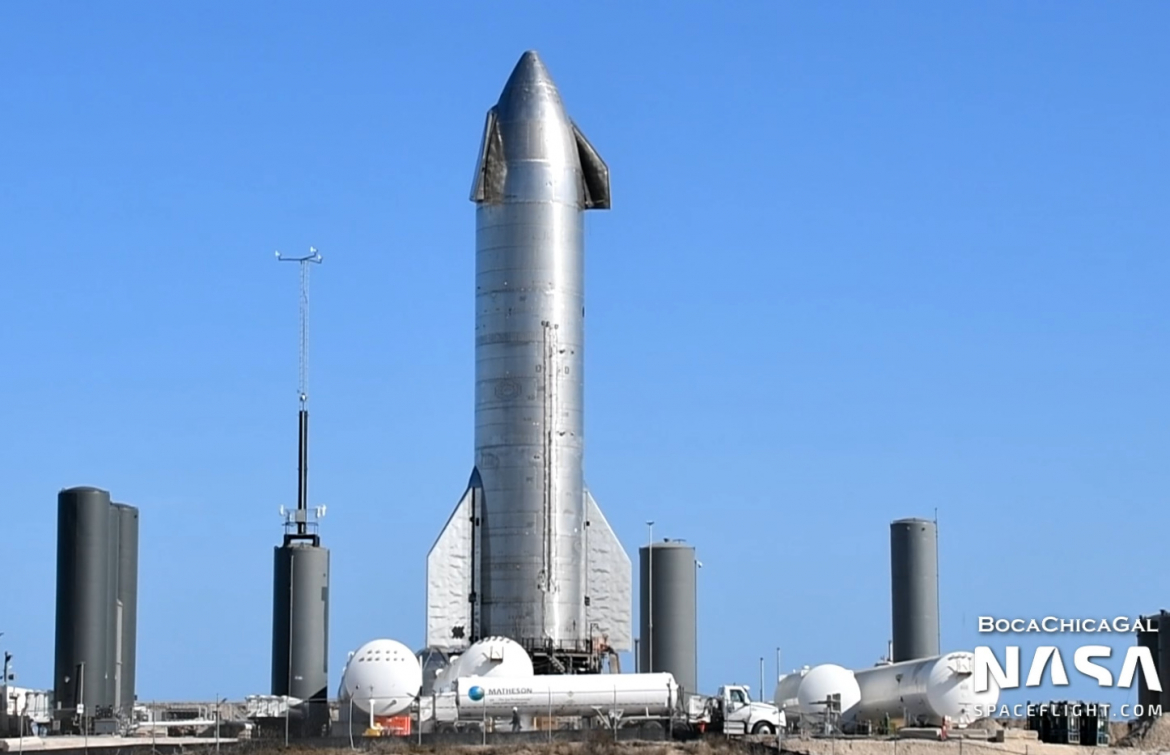 The three Raptor engines tasked with Starship’s third high altitude test flight have been installed into the aft of SN10. Pending acceptable results from an upcoming Static Fire test, SN10 will be tasked with repeating the flight of her deceased sisters, SN8 and SN9, before a landing attempt that will utilize a slightly different approach to the flip ahead of landing – allowing for redundancy in the event one Raptor suffers an issue, as was the case with the loss of the previous two Starships.

Starship SN11 was moved to the High Bay for nosecone and aero surface installation, with production continuing unabated. At the same time, future vehicles up to at least SN18 are being prepared, along with the first two Super Heavy prototypes.

Preparations for Starship SN10’s flight were already taking place as SN9 took to the skies last week. SN9’s flight achieved the same milestones as SN8 before suffering an issue during the flip maneuver and crashing into the landing pad.

Thankfully, SN9 didn’t cause any damage to her sister sat on Pad A, in turn providing positive reinforcement for hosting two Starships out at the launch site at the same time during a launch campaign.

The specific cause of SN9’s issue during landing has not been revealed. The two official pipelines of information – SpaceX, and its Chief Designer/CEO Elon Musk, offered a variation on the theme.

“During the landing flip maneuver, one of the Raptor engines did not relight and caused SN9 to land at high speed and experience a RUD (Rapid Unscheduled Disassembly),” noted a post-flight update from SpaceX. Whereas Elon tweeted, “We were too dumb. It was foolish of us not to start 3 engines & immediately shut down 1, as 2 are needed to land.”

Interestingly, the SpaceX update made a key reference to “did not relight,” pointing to a likely issue with one Raptor’s ignitor.

While this issue has been seen from time to time during Static Fire tests, some solace may come from a relight issue coming during the relight phase ahead of the flip.

This was always going to be challenging during early Starship tests, with some positivity coming from an apparent three out of four relight successes for the flip.

With SN8 successfully relighting both Raptors, a problem with the CH4 (Liquid Methane) Header Tank resulted in a loss of thrust during the landing burn. During SN9, the relight issue with one Raptor meant the other Raptor could not correct the flip.

Elon Musk’s “dumb” comment was likely out of frustration in not implementing redundancy. However, that can – and is being – rectified ahead of SN10’s flight, with Elon confirming in a Twitter response that all three engines will be lit during the next flip maneuver before deselecting the engine with the least lever arm “if all three are good.”

Elon also noted the potential sting in the tail is how Starship reacts if all three engines do relight, given “engines have a min throttle point where there is flameout risk, so landing on three engines means high thrust/weight (further away from hover point), which is also risky.”

Regardless, the implementation of this redundancy option can be installed into SN10’s profile when it launches on what is likely to be a repeat of SN9’s flight – albeit with the target altitude yet to be revealed.

Preparations for Starship SN10’s flight were ongoing while SN9’s debris was still being removed from the landing pad.

Three Raptors have now been installed on SN10, with two engines spotted by Mary (@bocachicagal), confirming one is a brand new engine fresh from McGregor, SN50, while another is the repaired SN39. The latter was set to fly with Starship SN8 before unspecified issues called for it to be removed and replaced with SN36.

Providing the pad flow proceeds without issue, a Static Fire test of the Raptor trio may come as early as this coming week. Numerous roadblocks have been arranged, although the customary notice to locals, such as Mary, will only be known the evening before such a test is expected to occur.

Ironically, that came shortly after this article was published, with a potential Static Fire as early as Monday. However, these notices can be “copy and paste” by nature, with a cryo proofing still outstanding and likely to be a standalone test as the first port of call in SN10’s test series.

That proved to be the case, with Monday’s testing including – and appearing to successfully conclude – the cryo test element of SN10’s pad flow.

A Static Fire attempt will not be for a few more days, with no road closures planned for Tuesday – and Wednesday neither, following its cancelation – this week.

The launch of SN10 was scheduled for this month, as noted during SN9’s livestream, although this will be at the mercy of a successful pre-launch test campaign, of which the results of the Static Fire data will be key – per the Flight Readiness Review (FRR) that will confirm the target date.

Restrictions were published on Monday, noting an attempt could take place as early as Thursday. However, the launch is likely to be next week and the subject of FAA approval.

Hot on the heels of SN10 is Starship SN11, which took its next step in the processing flow with a short trip from the Mid Bay to the High Bay.

This is now a customary part of Starship’s preparations, taking advantage of the High Bay’s Super Heavy-related height to allow for the mating of the nosecone and aero surfaces.

SN11’s Nosecone had already completed preparations in and around the Windbreak facility during the week, before its weekend move toward the High Bay.

On Sunday, the nosecone was raised for mating operations with SN11.

While SN11 is another twin to SN8, 9, and 10 – continued progress on test objectives is visible with yet another increase in the amount of Thermal Protection System (TPS) tiles sported on various sections of the vehicle. 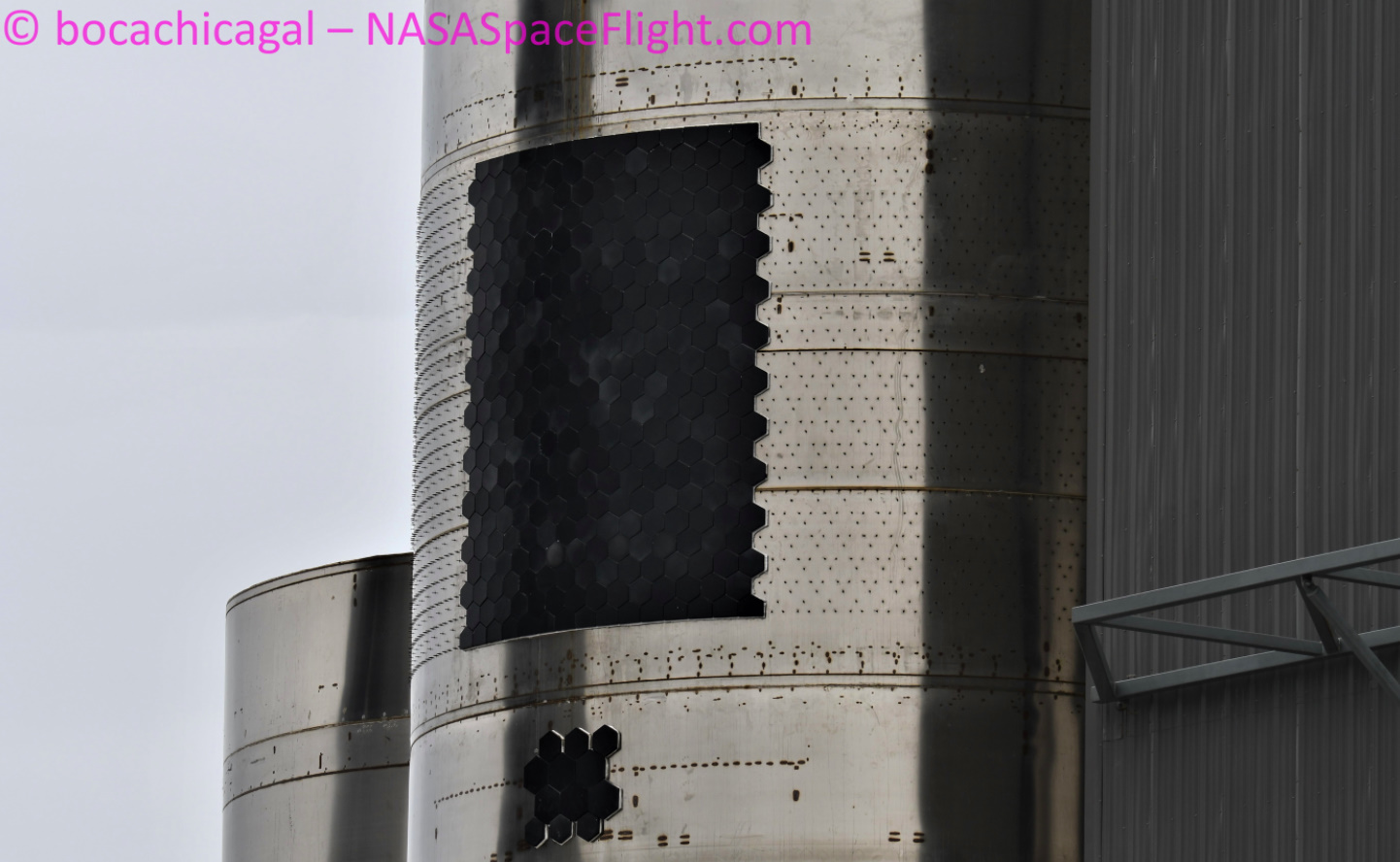 Meanwhile, the Mid Bay can now concentrate on yet another forward path on Starship development, with SN15 stacking continuing. It is unknown what improvements have been implemented on SN15 other than Elon’s reference of major upgrades targeted for this vehicle.

As previously noted, hardware for Starships SN12, 13, and 14 are no longer being prepared for launch – as observed with the dismantling of SN12 sections.

As such, vehicles to follow in SN15 footsteps will obviously align with the path of SN15’s upgrades, with parts spotted by Mary up to SN18, namely the rollout of the Common Dome for the latter. 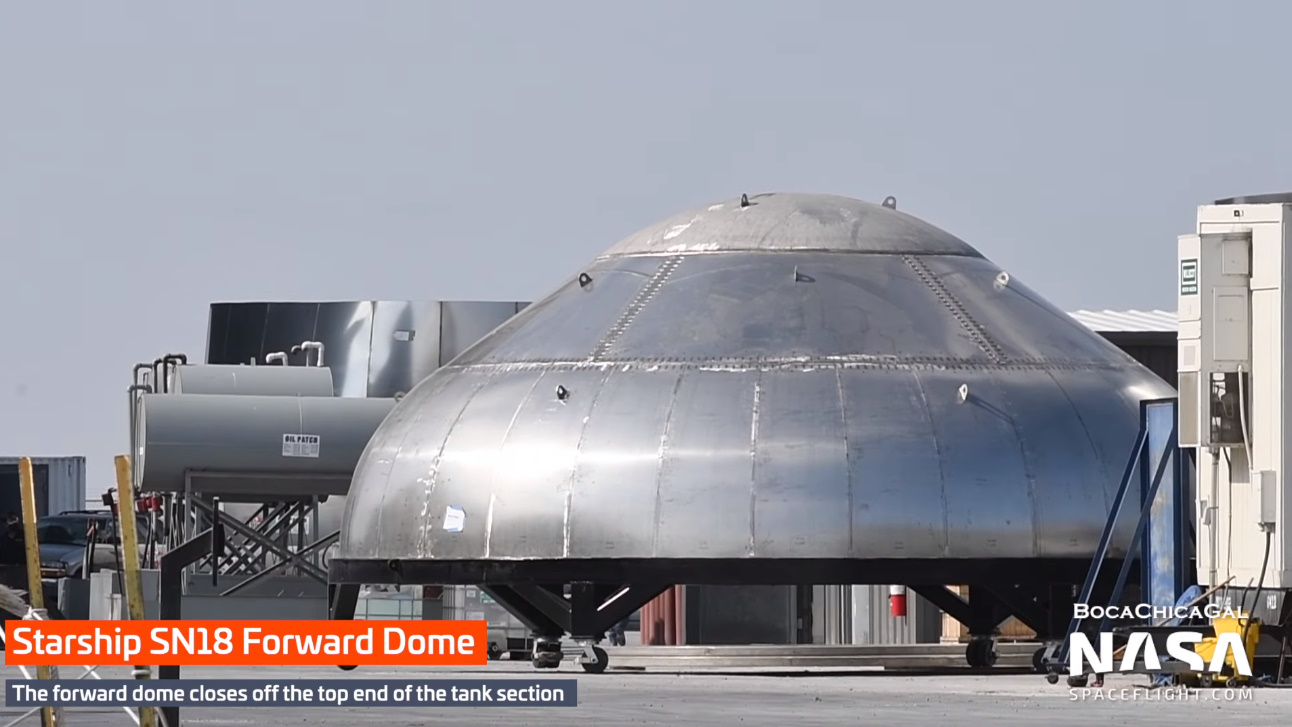 At last count, all the sections are ready for SN16 to begin stacking next to SN15 in the Mid Bay, while numerous sections for SN17 have already been observed out in the wild.

Testing for the future upgrades for Starship included utilizing the SN7.2 Test Tank out at the launch site.

Made from 3mm thick Stainless Steel – as opposed to the 4mm thick 304L utilized on the current Starships – the Test Tank provides data via proof testing and then cryo testing.

Usually, they are pressurized to failure, with some visually impressive pops and sploshes over previous iterations. However, this time, SN7.2 appears to have provided positive indications, with its “failure” resulting in a relatively controlled leak from one of its weld points.

Scaffolding has since been erected around the tank to take a closer look at the failure point or repair it and push the tank to even higher pressures before it fails.

Also coming soon will be the first Super Heavy prototype, with BN1 (also known as B1) already rising in the High Bay.

The current path for Super Heavy is somewhat unknown, or at the very least in need of an update, with BN2 (B2) already arriving on the scene in the form of a Forward Dome. This will be located at the very top of the tankage.

While it is understood BN1’s test objectives can be completed at Starship’s launch site, its eventual home at the Orbital Launch Site continues to undergo a large amount of preparation.

With the hardware for the launch mount being prepared, work on the installation of Ground Support Equipment (GSE) picked up over recent days. 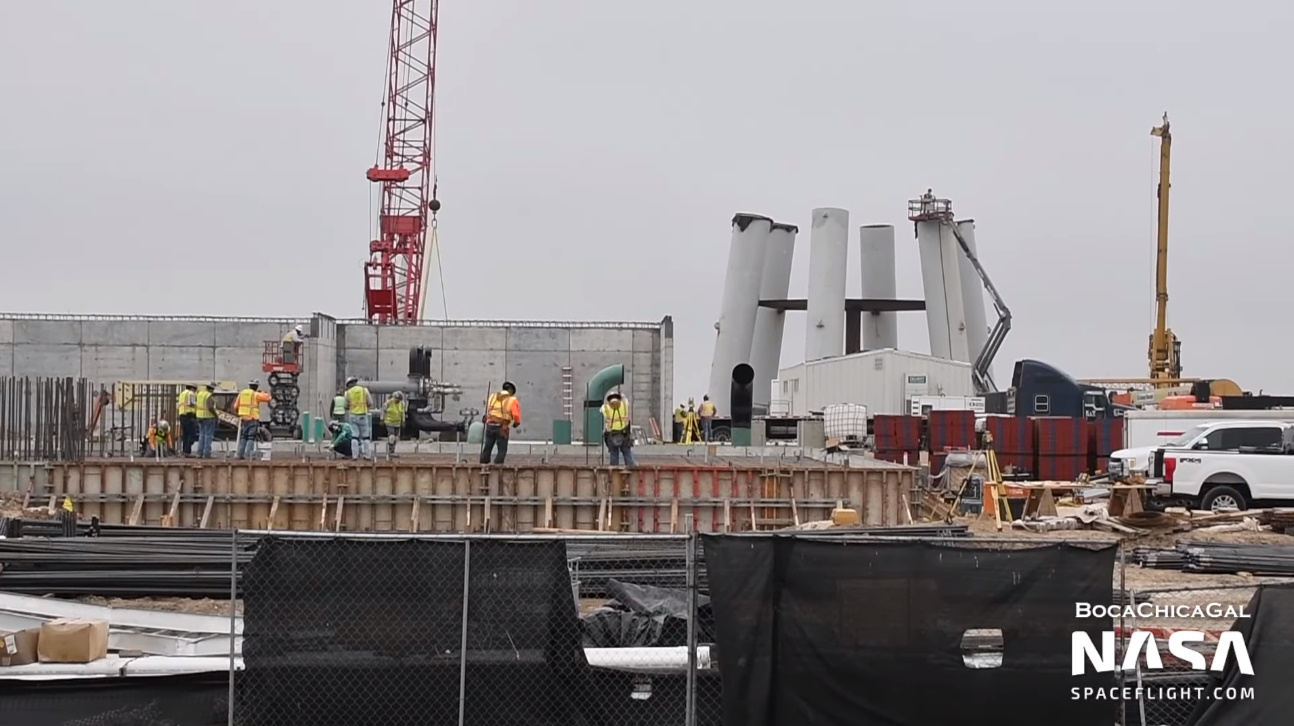 This work is taking place amid ongoing construction that may include foundation work on a huge fixed support structure for Super Heavy rockets.

This launch site should be in action later this year, involving the next leap for Starship, as it prepares to ride on the Super Heavy for the prize of reaching orbit.

Such achievements will partly be in thanks to the “Hop Gang” successes, starting with Starhopper, before the 150-meter hops from Starship SN5 and SN6.

Although the immortal Hopper lives on as a multi-purpose launch site guardian and observation platform – barking out orders to her human workforce – the fate of SN5 and SN6 has now been confirmed.

With the vast number of future Starships vying for space at the Production Site, SN6 was cut down into sections. It was hoped SN5 could have earned a reprieve, potentially acting as a mock-up for the Human Landing System (HLS) nosecone.

However, workers began cutting into the SN5 sections over recent days, confirming this vehicle won’t even become a lawn ornament at SpaceX Boca Chica. 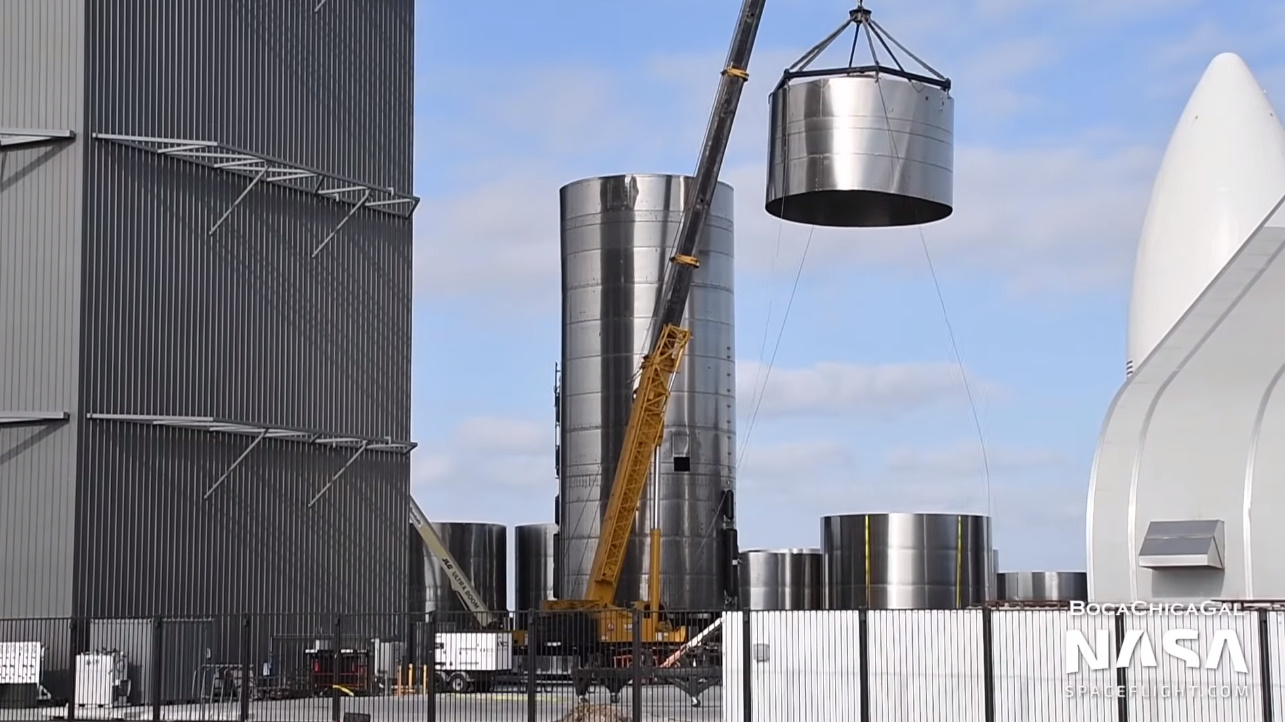 While the successes of SN5 and SN6 will forever bookmark Starship’s green light for high altitude testing, there appears to be little sentiment to the past, as SpaceX Boca Chica pushes on toward its future.