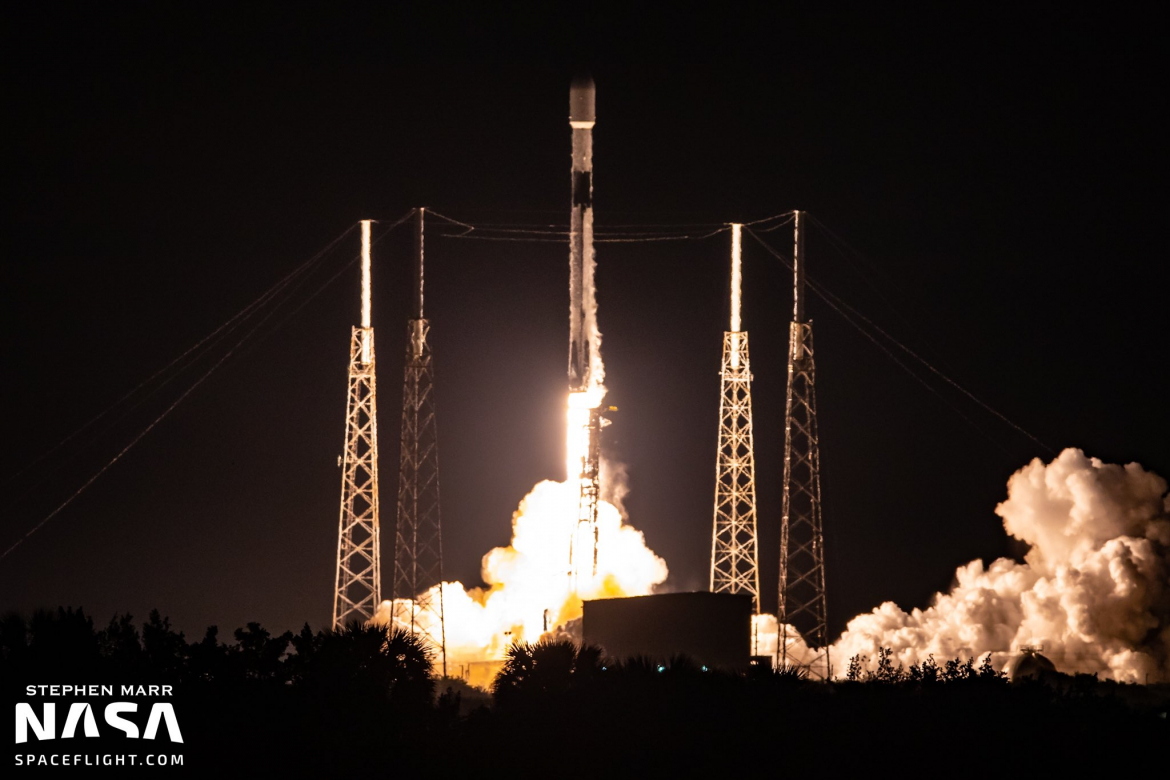 The Starlink constellation received another 60 satellites, as Falcon 9 B1060-6 launched on Falcon 9’s ninth flight of 2021 and fourth flight. Liftoff was on schedule at 4:28 am EDT (08:28 UTC), Wednesday, March 24, the 15th anniversary of SpaceX’s first-ever orbital launch attempt.

This launch was conducted from Space Launch Complex 40 (SLC-40) at the Cape Canaveral Space Force Station in Florida. The first stage, B1060-6, previously supported the GPS-III-SV03 and Turksat-5A missions, in addition to three previous Starlink launches.

Each fairing half had also flown previously, one half on the Sentinel-6A mission and the other on a prior Starlink flight.

The pre-dawn launch was visible from much of the east coast of the United States during the early phases of flight, depending on local weather and cloud cover, following a northeast trajectory inclined 53 degrees to the equator, as is typical for most Starlink launches.

After stage separation, B1060-6 landed on the autonomous spaceport drone ship Of Course I Still Love You stationed 633 kilometers downrange in the Atlantic Ocean.

For you new people, the "6" is the number of missions this booster has now completed, as opposed to ending up at the bottom of the ocean (in small pieces) after "1". pic.twitter.com/9OJAqm2WCA

A new addition to the SpaceX recovery fleet, Shelia Bordelon, was positioned further downrange to attempt recovery of both fairing halves after splashdown. 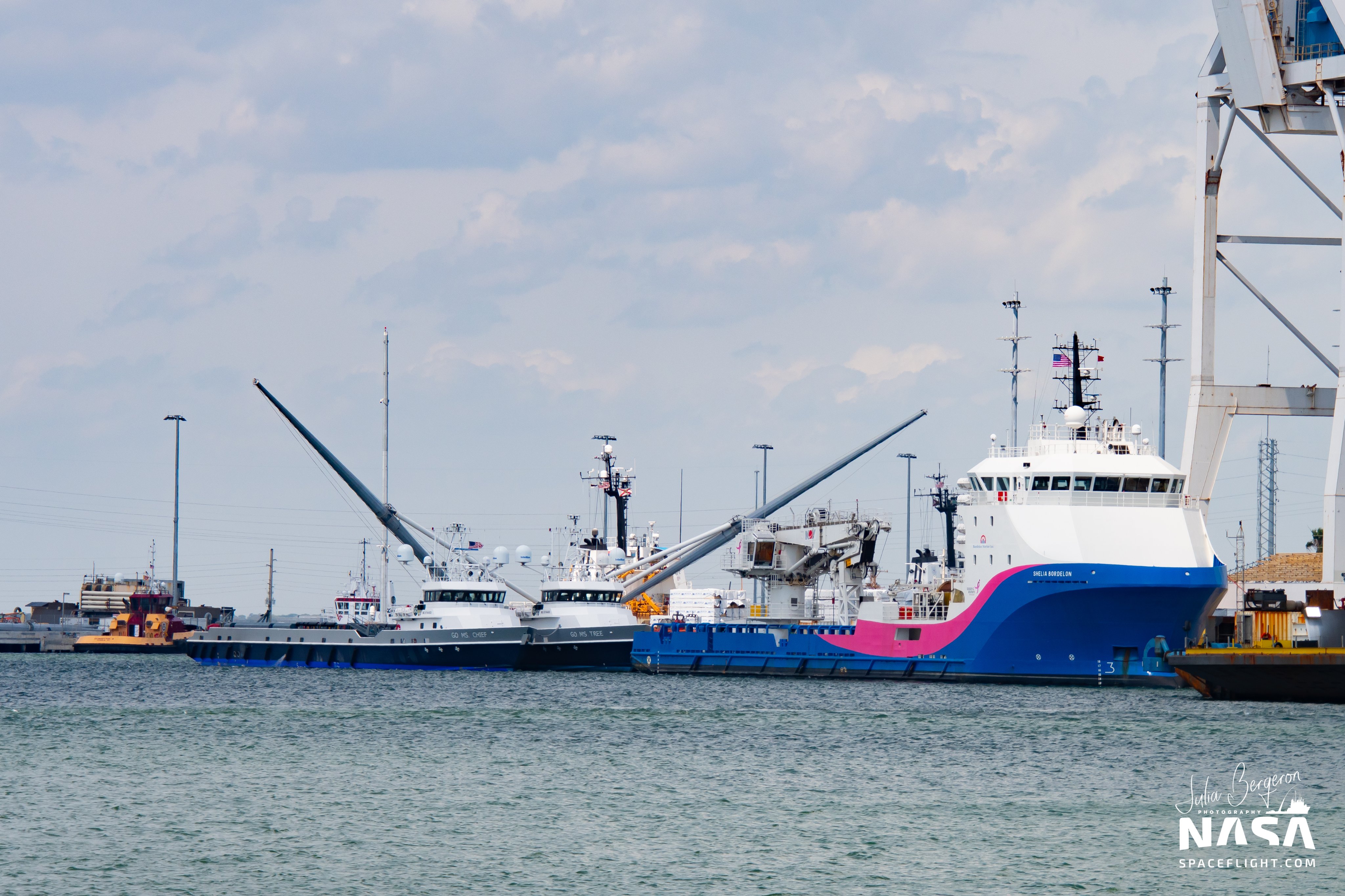 SpaceX has recently appeared to adjust its fairing recovery strategy. The ships previously dedicated to fairing catch attempts, GO Ms. Chief and GO Ms. Tree, have been stripped of their nets and arms, a possible sign that dry fairing recoveries will no longer be attempted. Post-splashdown recovery has proven to be fairly successful, as recent missions frequently use fairing halves that have flown once if not multiple times before.

The Falcon 9 second stage completed two burns prior to payload deployment. The satellites, massing a total of 15,600 kilograms, will be deployed using their usual “deck of cards” method approximately one hour after liftoff. The satellites will, in due course, maneuver to their operational orbit at 550 kilometers altitude.

After the Starlink satellites have separated from the upper stage, a deorbit burn will place the stage on a trajectory to reenter the atmosphere south of Australia. This is done to minimize any chance that the stage could break apart in orbit and cause debris problems that could endanger existing or future spacecraft.

The space debris situation in Earth orbit has recently received extra attention due to the influx of Starlink launches and the emergence of other large constellations of spacecraft.

As part of the focus on reducing the threat of space debris, NASA and SpaceX recently signed a joint spaceflight safety agreement. Per this agreement, SpaceX will notify NASA of launch dates and target orbit of Starlink spacecraft no later than one week before the planned launch and will provide NASA with analysis of the satellite trajectories after deployment five days before the planned launch. 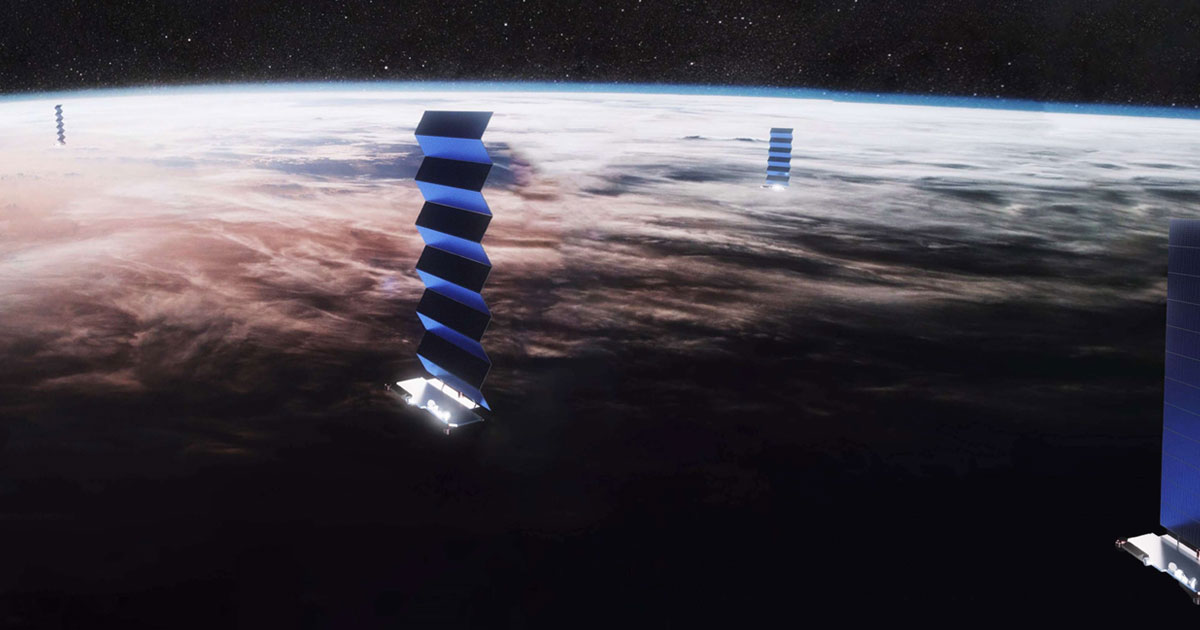 Render of Starlink satellites in orbit – via SpaceX

In return, NASA will perform a collision avoidance analysis from the SpaceX data. This analysis will inform decisions on the planned launch time and orbit perigee and apogee of the satellites two days before the launch.

The usual process for collision avoidance involves satellite and launch operators sending trajectory information to the US Air Force’s 18th Space Control Squadron at Vandenberg Air Force Base. The 18th SPCS would screen this data against their own space object catalog and spacecraft tracking data. The results are sent to satellites’ owners and operators (including NASA and SpaceX), which would determine if they needed to do any avoidance maneuvers.

Falcon 9 illuminates the Space Coast on its 6th flight.

B1060 got its start flying a GPS-III satellite, with Turksat 5A and a few Starlinks sprinkled in there.

After a successful landing on OCISLY, we’ll see her back in port in a few days!https://t.co/yUxruzLl0j pic.twitter.com/jtFRuJlTwe

However, the large number of Starlink satellites and their onboard autonomous maneuvering capability prompted NASA to decide to work on an information sharing agreement directly with SpaceX to mitigate debris risks to their satellites.

The same information-sharing agreement also asks NASA to share information regarding reduction of satellite brightness, to mitigate effects on the night sky. The first Starlink launches revealed that the spacecraft were fairly bright to the naked eye and that many bright satellites could seriously impact ground-based astronomical imaging and observations.

After a failed experiment with a dark coating, a sunshade has been developed, which is now used on all new Starlink launches. It is hoped that this information-sharing agreement will further assist efforts to mitigate impacts to the night sky from Starlink and other mega-constellations.

The United Kingdom now also has Starlink beta testers, and internet speeds of up to 400 mbps have been reported. However, 150 mbps download speeds are currently specified by the “Better than Nothing” beta program. Pre-orders have been opened to the general public for a one-time fee of $499 for the equipment and $99/month for satellite internet service.

When SpaceX made its first orbital launch attempt 15 years ago, satellite constellations for worldwide communications (like Iridium and Globalstar) had been launched, but they offered low speeds and were very expensive. Nothing like Starlink was on the horizon when the Falcon 1 launched from Omelek Island in the Pacific on March 24, 2006 with the FalconSat-2 satellite built by cadets at the US Air Force Academy.

That launch ended in failure, but after perseverance, hard work, and a few setbacks, the Falcon 9, using an updated version of the Merlin engine used on that first Falcon 1 launch, is now ready for its 113th launch, building up a satellite constellation that is a key to funding Elon Musk and SpaceX’s ambitions to make humanity a multi-planetary species.