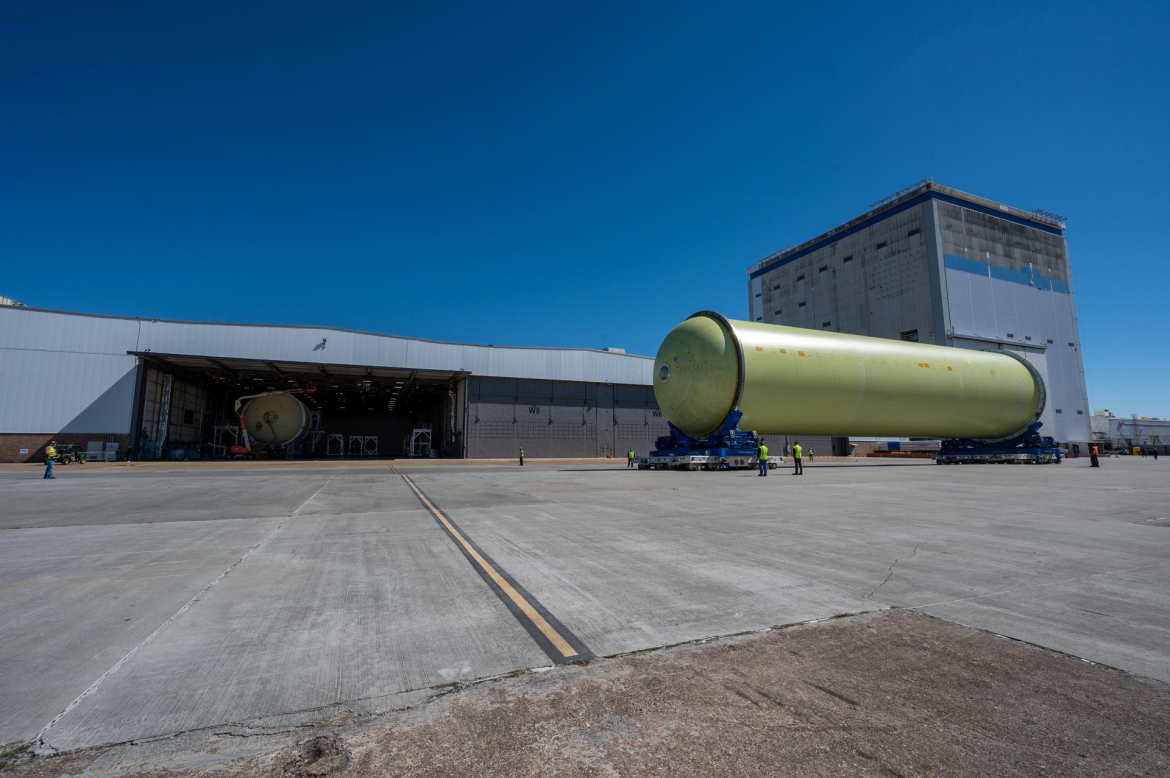 Boeing is moving into the final phases of standalone integration and outfitting of Core Stage-2 elements and is about to start putting the elements together as production of Core Stage-3 continues with structural assembly of the engine section while preparations are in work for Exploration Upper Stage (EUS) manufacturing to start later in the year.

In parallel with Boeing production of SLS stages and a factory optimization effort going on inside the production areas at the Michoud Assembly Facility, NASA is continuing to oversee repairs to the outside of the buildings from recent weather damage and upgrades to protect against future extreme weather while access to the facility at-large remains restricted by the ongoing COVID-19 pandemic.

Despite impacts from severe weather and the COVID-19 pandemic, it will be another busy year at NASA’s Michoud Assembly Facility (MAF) in New Orleans. Repairs to facility buildings from tornado and hurricane damage go on while inside the factory work to produce new Space Launch System rocket stages resumed when MAF re-opened in May 2020 after a COVID-19 shutdown.

Hurricane Zeta passed directly over the facility last October, undoing a few long-term repairs to damage caused by a February 2017 EF-3 tornado; however, some post-tornado upgrades to roofs and siding held up, and it is hoped those can be completed before the next big storm arrives.

“[2020] was an interesting year,” Robert Champion, NASA’s director of the Michoud Assembly Facility, said in February. “We had six hurricanes that we prepared for. Five of them we shut down for, one of them hit us; that being Hurricane Zeta.”

“We’ve spent a significant amount of money just [for] temporary repairing,” Champion noted.  “We’ve got a supplemental [funding request] that we’ve submitted to Congress to see if there’s money to help us really fix the damage, but as we’ve done before, we do triage and we move on and we keep the flight hardware producing.” 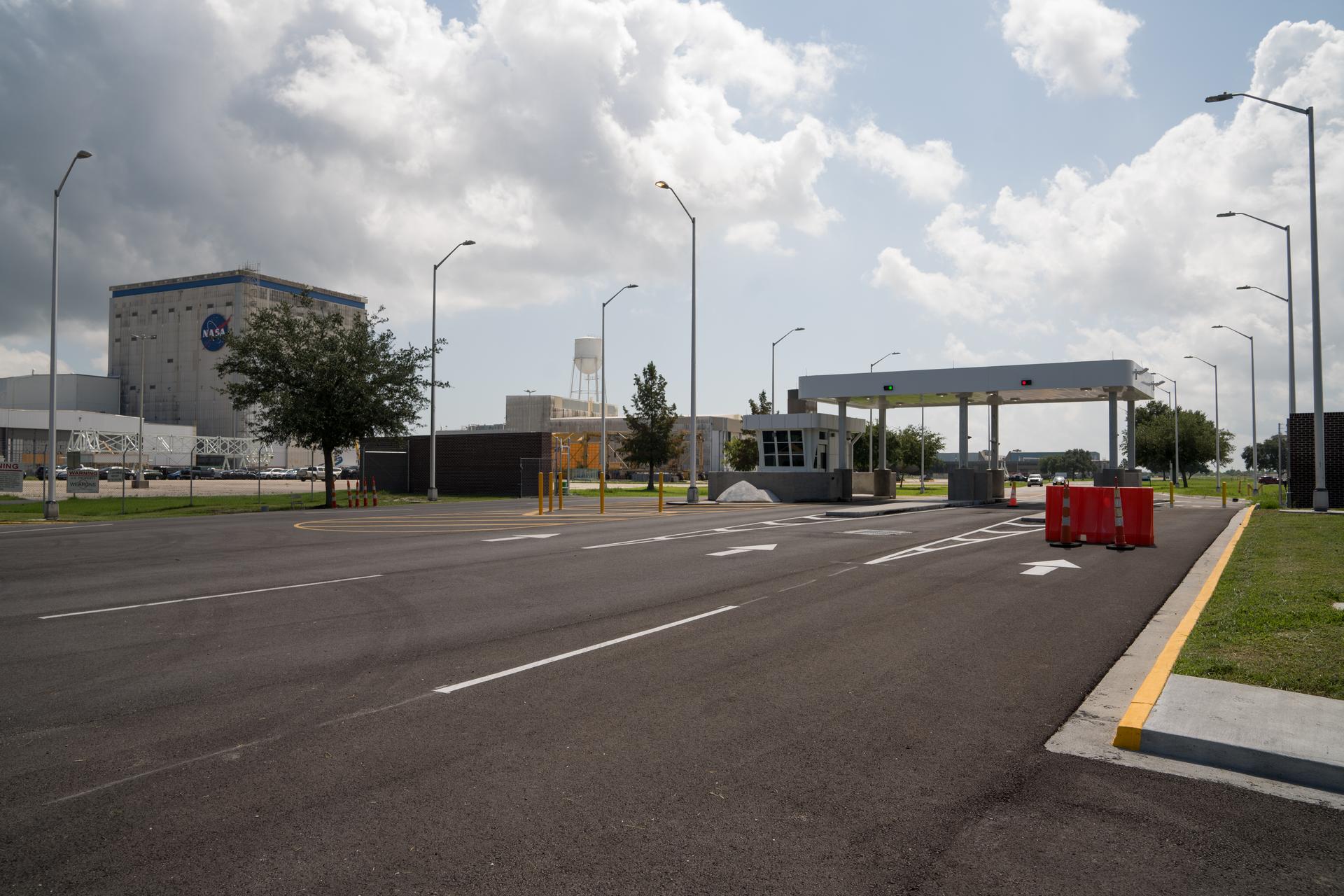 (Photo Caption: Permanent repairs to the Gate 7 entrance at MAF as seen following completion of work in September 2020. The February 2017 EF-3 tornado damaged the gate area just before it went through the SLS manufacturing and assembly areas at MAF (seen in the background on the left). The multi-vortex tornado destroyed Building 350 (not pictured.)

“We shut the plant down for one day to actually recover and reopen after Zeta, and I think that’s a tremendous tribute to our personnel here that they were able to clean up and get things patched up enough.”

“We had one fan house from the top of Building 114 that came off and hit [Building] 103 about 60 or 70 feet down with significant force, poked a hole in the roof close to flight hardware,” Champion noted. “We got lucky there that we didn’t damage it. It let in a lot of water, and we had some clean up. But they were able to get that all back and running in one day.”

The repairs allowed work to continue, but they are temporary. “As I’ve told my leadership, we’re good for about 18 months or the first storm, and unfortunately we’ve had one storm already,” Champion said.

By the time Zeta hit the facility in late-October, Champion noted that the on-going COVID pandemic had left its mark at Michoud just like everywhere else. “When [COVID] hit back last March, between Mardi Gras and St. Patrick’s Day, we shut down for about four to six weeks,” he said.

“That was really when folks were just starting to understand what the issues were, and then we started developing policies about how to wear masks, how to socially distance, washing hands, cleaning surfaces, getting hand sanitizer put out, and then we were able to open back up. We opened back up to about a 25% capacity.”

“To date I’m very proud of the team and how they’ve observed all the protocols and that we’ve only had one confirmed [transmission] of COVID on-site. We’ve had a lot of people who have gotten sick, but they got sick outside.” 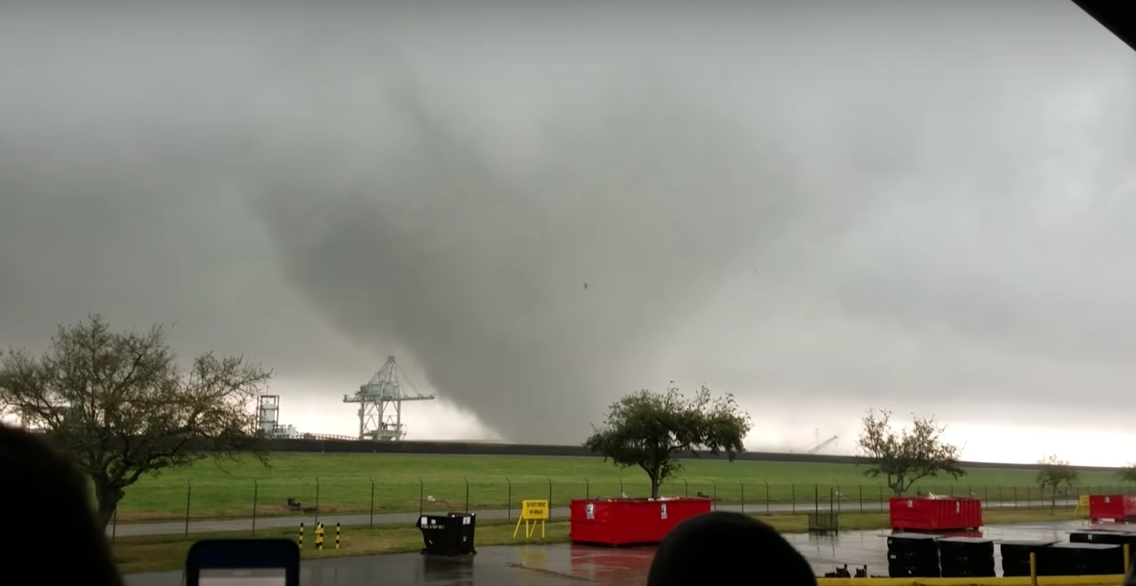 (Photo caption: An EF-3 tornado traverses the grounds of the Michoud Assembly Facility on February 7, 2017.)

For the people who have to be on-site for essential work, a tracking device provides contact tracing. If someone reports an illness, the devices provide input to a system that can notify anyone who got inside the social distancing limit to that person at the facility.

“If we’re six feet apart, it’ll register that I was within six feet, so then if I wind up getting sick or having COVID, [the system] will say [who] needs to be quarantined as well,” Champion said. “We’ve got about a thousand of these [devices] allocated between Boeing, Lockheed, S3 [Syncom Space Services], and the NASA folks.”

MAF is in Stage 3 of the COVID response framework with some modifications, including operating at 25% on-site capacity. Similar to the shared experience by many others, teleworking is the temporary norm and will likely remain a part of how some work.

“Most of my staff teleworks,” Champion said. “We have about 20 people, and we’re usually five to seven that are in the office. So a lot of my staff, the business office, procurement office, some of those can do their job just fine from home and even coming back out of this I think we will have an option to allow people to telework now.”

Prior to Hurricane Zeta, the 2017 tornado in East New Orleans also directly hit MAF, causing significant damage to the SLS production areas after collapsing the front of Building 350. Three years after the tornado, the remains of the building were finally removed.

“350 was pretty much destroyed. It was an old building, had asbestos in it, and it would cost more to clean it up and repair it than it would be to just tear it down. That’s what we did. We got funds to tear it down, and as of right now, as of end of February, it is basically back to green space.” 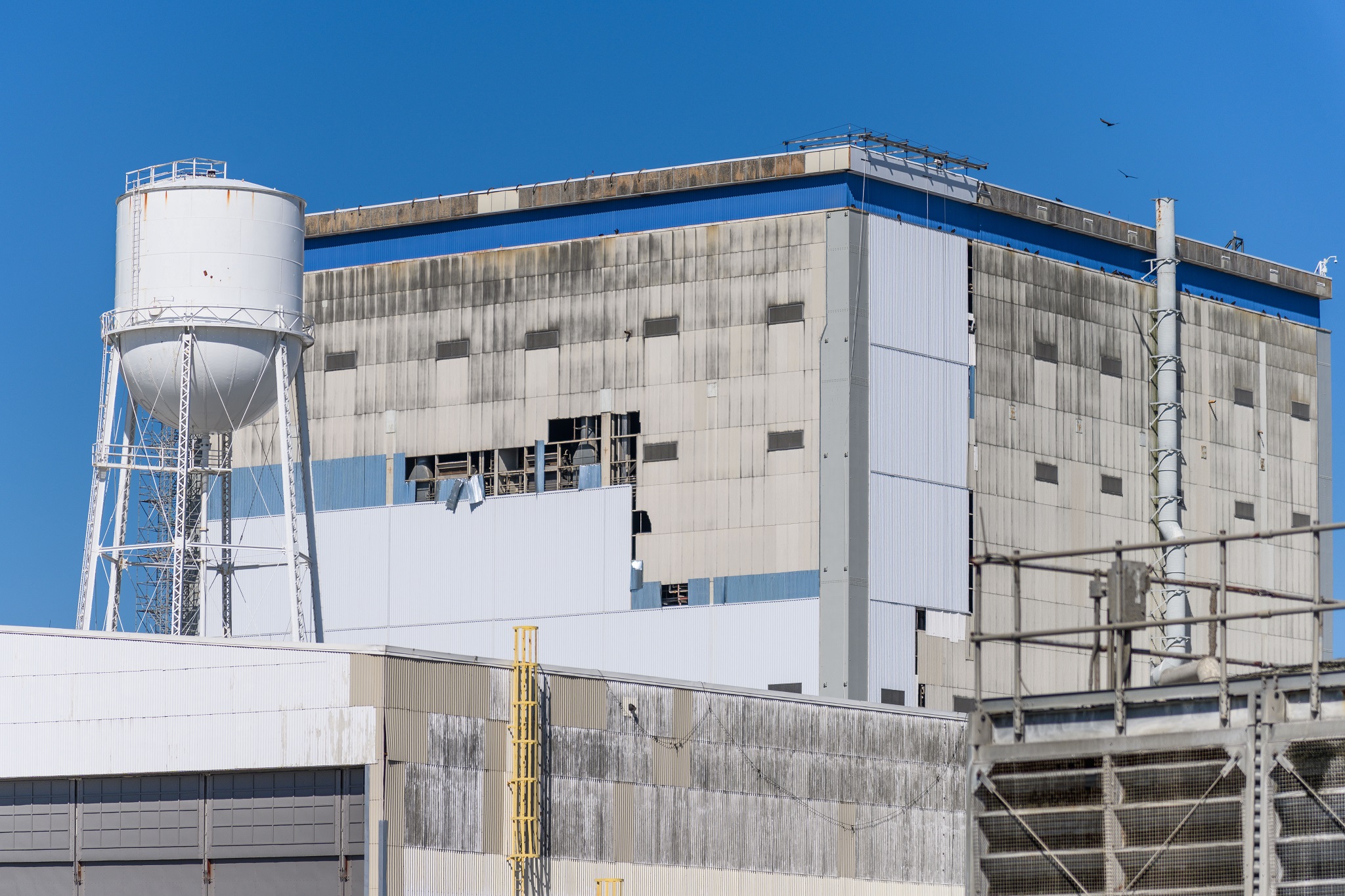 (Photo Caption: The old siding on Building 110 is missing in places on the day after the passage of Hurricane Zeta in October 2020. The lighter colored paneling installed nearby is a new, permanent replacement siding that is being installed after the 2017 tornado. The newer siding survived the hurricane intact and is hoped to be fully in-place before the next big storm hits.)

“On the west side of 110, the bottom half up to about three-quarters high has a brighter-colored siding on it,” Champion said. “That is the new siding. That was there during Zeta on about two and a half, three sides. We’re still putting it up.”

Champion noted they expect the rest of the siding to be installed during 2021. “The new siding is double-layered and it’s got insulation so it gives us insulation for the building as well as hurricane protection. And it fared very well,” he said. “The old siding, some of it pulled off during the hurricane, so that proved the old stuff needs to go and the new stuff worked well.”

Roof repairs to Building 110 and Building 103 from the 2017 tornado held up, but Hurricane Zeta caused roof damage elsewhere. “The roof on [Building] 114 that was about 60% repaired, but all of the debris came off and just peppered it with shrapnel and ripped into the roof and so we’re going to have to repair 40 to 50% of the new roof on 114,” Champion said.