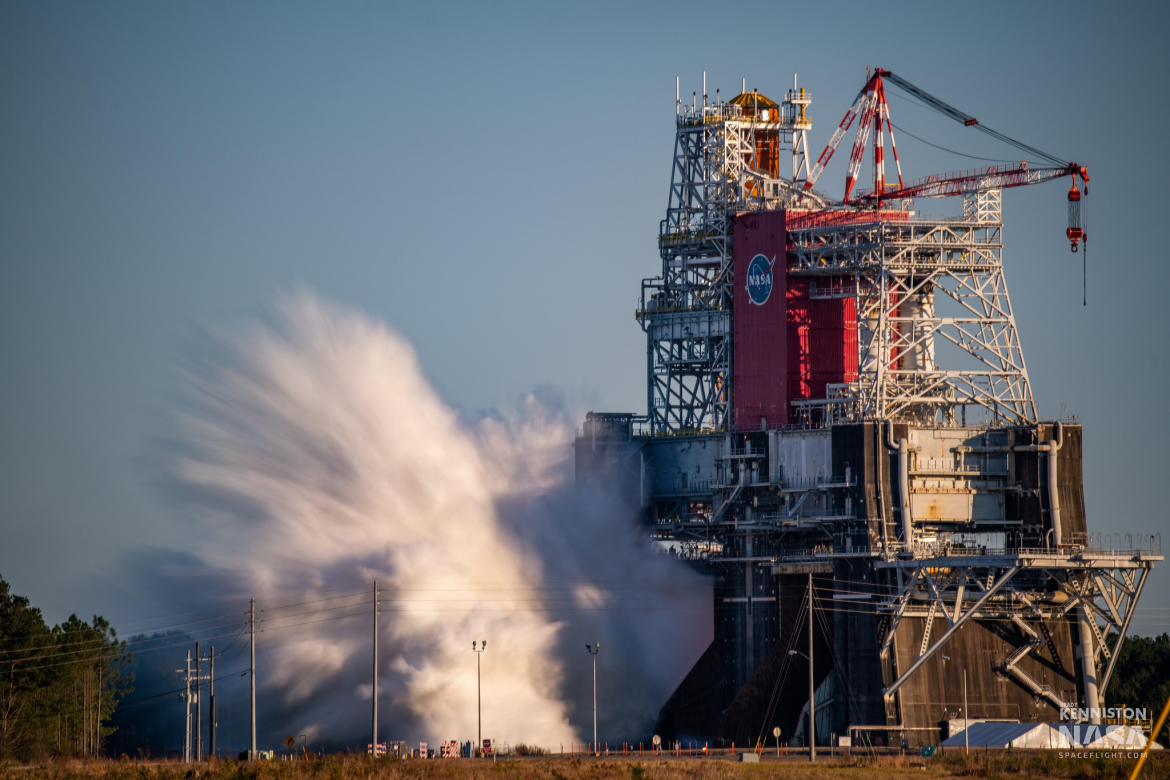 NASA’s Space Launch System (SLS) program and Core Stage prime contractor Boeing conducted the second static firing of the new rocket stage and its four Aerojet Rocketdyne RS-25 engines. The primary goal in the repeat of the Green Run Hot-Fire test was to complete all ten of the design verification objectives (DVO); the abbreviated first test on January 16 demonstrated three of the DVOs and part of another.

The static test firing in the B-2 Test Stand at the Stennis Space Center completed an eight-minute long, flight-duration test, although NASA and Boeing say they can collect enough data to complete the primary objectives somewhere around the four-minute mark. Following ignition, the engines were put through a set of circular and sinusoidal gimbaling experiments that will help demonstrate operating margins predicted by analytical models.

The Core Stage Green Run design verification campaign is planned as a one time only chance for the SLS Program to test the vehicle under flight-like conditions on the ground, and they have invested a lot of time and resources to perform the testing. “This is a generational opportunity to learn as much as we can about the rocket while we’ve got it in this test configuration before we get to fly,” NASA SLS Program Manager John Honeycutt said in a February 19 pre-test briefing.

Staggered start commands will be issued to the engines individually at 120 millisecond intervals; the engines will start at a 100% rated power level and then throttle up to 109% at T0.

The first Hot-Fire test on January 16 ended 67 seconds after ignition, shortly after the first of three engine gimbaling tests started. The first hydraulic thrust vector control (TVC) system gimbal test moved all four engines in a circular motion at the maximum rate of speed; kind of like flushing all the toilets in a house at the same time, the demand put on the vehicle’s hydraulic systems by the simultaneous, high-speed gimbaling caused its pressure and reservoir levels to drop below test criteria limits.

“We do understand why the first test ended earlier than planned, and we’ve used the test data from the first Hot-Fire to refine parameters and make some changes to make sure we’re in the best position for this second Hot-Fire,” Honeycutt said.

“We’re aiming for a test that lasts at least four minutes and up to eight minutes. The longer test obviously will give us data on how the stage and the engines work during normal operations as well as really testing the stage not only in what would be nominal operations but really stressing what we like to call the ‘corners of the box.'”

The abbreviated January test was the first demonstration of a complete Core Stage countdown, full engine start sequence, and a safe shutdown, which completed a partial set of design verification objectives.

“For Hot-Fire specifically, we have ten DVOs, and really what we’re looking for is data so that we can confirm that the design itself is ready for all future missions for the Artemis Program,” Julie Bassler, NASA manager of the SLS Stages Element, said in the February 19 media briefing.

“From the first Hot-Fire, we got all the data we needed for three of those. Six of those we collected partial data, so we want to gather additional data so we can fully close [them]. And there was actually one DVO that we didn’t get any data on yet.”

Test technicians and engineers in the @NASAStennis test control centers have given a “go” for today’s Green Run hot fire test of the #Artemis I core stage.

“The data we’re going after in the second Hot-Fire is really for the design certification process that we’re going through,” Bassler added. “We need to collect this to close all those verification items.”

Green Run is a test of the new Core Stage; the veteran RS-25 engines have flown on several Space Shuttle missions and are playing the role of test support equipment for the Core Stage. If the stage can run the engines for at least four minutes, enough data would be collected to cover the primary DVOs.

“If we go to four minutes, we will collect all the data for those ten Hot-Fire DVOs,” Bassler said. “We did have secondary objectives also set up [for] the TVC system; we did have three of those, and we will get partial data on those at the four-minute mark. But since they’re secondary objectives, we don’t consider those at the level of a requirement as we do for the first ten.”

“So the four-minute mark is where we collect all of our verification data. So we’re considering that our minimum success criteria.”

There are no plans to manually stop the test firing past the four-minute mark; if the stage and the engines are operating within the test limit criteria, the test will continue until the engines drain the propellant tanks and the low-level cutoff system triggers engine shutdown after a full flight duration of a little more than eight minutes.

NASA SLS, Boeing, and Aerojet Rocketdyne engineers refurbished the Core Stage and RS-25 engines following the January 16 test and, after reviewing adjustments for a second test, were nearly ready to conduct the second Hot-Fire on February 25 when a second prevalve failed a functional checkout. The liquid oxygen prevalve for engine 1 failed to fully open, and after troubleshooting it was decided to repair the clutch mechanism. 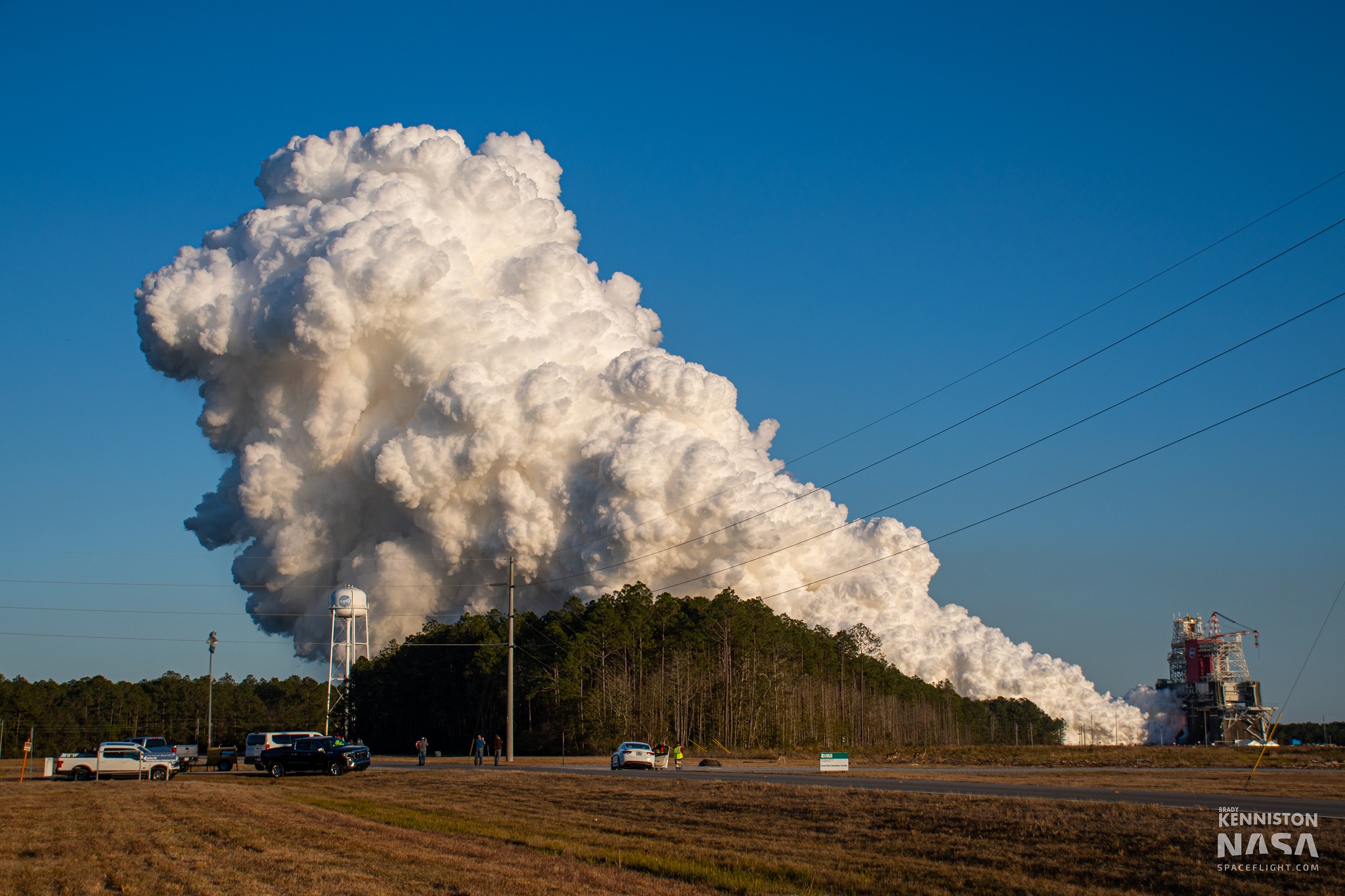 (Photo Caption: The flight article for Artemis 1, Core Stage-1, fires in the B-2 position of the B Test Stand at Stennis Space Center on January 16. The Hot-Fire was cut short after 67 seconds of engine runtime when the stage’s hydraulic performance fell below conservative limits just as the engines were being aggressively gimbaled for the first time in the test.)

Issues with the clutch mechanism for a liquid hydrogen (LH2) prevalve, the one for engine 4, delayed Green Run testing for about a month in November 2020 while troubleshooting and repairs were made on it. There are eight prevalves in the Core Stage engine section that control the flow of propellant from the tanks to each of the RS-25 engine inlets, four for LOX and four for LH2.

Following the November repair of the engine 4 LH2 prevalve, all eight prevalves worked correctly throughout the Wet Dress Rehearsal propellant loadings in December 2020 and critically during the January 16 Hot-Fire test before the second failure occurred in February.  The tools and procedures developed to make the first repair were modified, and their availability coupled with a more favorable location in the vehicle allowed the LOX prevalve repair to proceed more quickly.

The root cause for both failures is still under investigation by the SLS Program and Boeing. NASA said inspection of the clutch assemblies indicates similar failures and that the same components show similar wear.  The investigation will be completed before Artemis 1, and any findings will be evaluated for modification of the prevalves in Core Stage-1 and subsequent units that would be installed in Core Stage-2 and beyond.

The Green Run moniker generally indicates an acceptance test of rocket hardware, from components like turbopumps and valves to engines and stages; however, given the one chance to fire a working Core Stage before it is expended in flight, the Hot-Fire goes beyond acceptance testing in the middle of specified operating ranges to stress testing out to their edges and corners while the engines are firing.

The three gimbaling tests will investigate the response of the stage to high-speed movement of the engines. “This is not by any means a vanilla firing of the Core Stage,” John Shannon, Boeing’s Vice President and Program Manager for SLS, said in the February 19 briefing.

“Since it’s a highly-instrumented vehicle, we’re taking that opportunity to do some very aggressive maneuvers of the thrust vector control system, so you’ll see a lot of movement of the rocket nozzles pretty much throughout the entire firing, even some very rapid movements that you normally would not see in flight.”