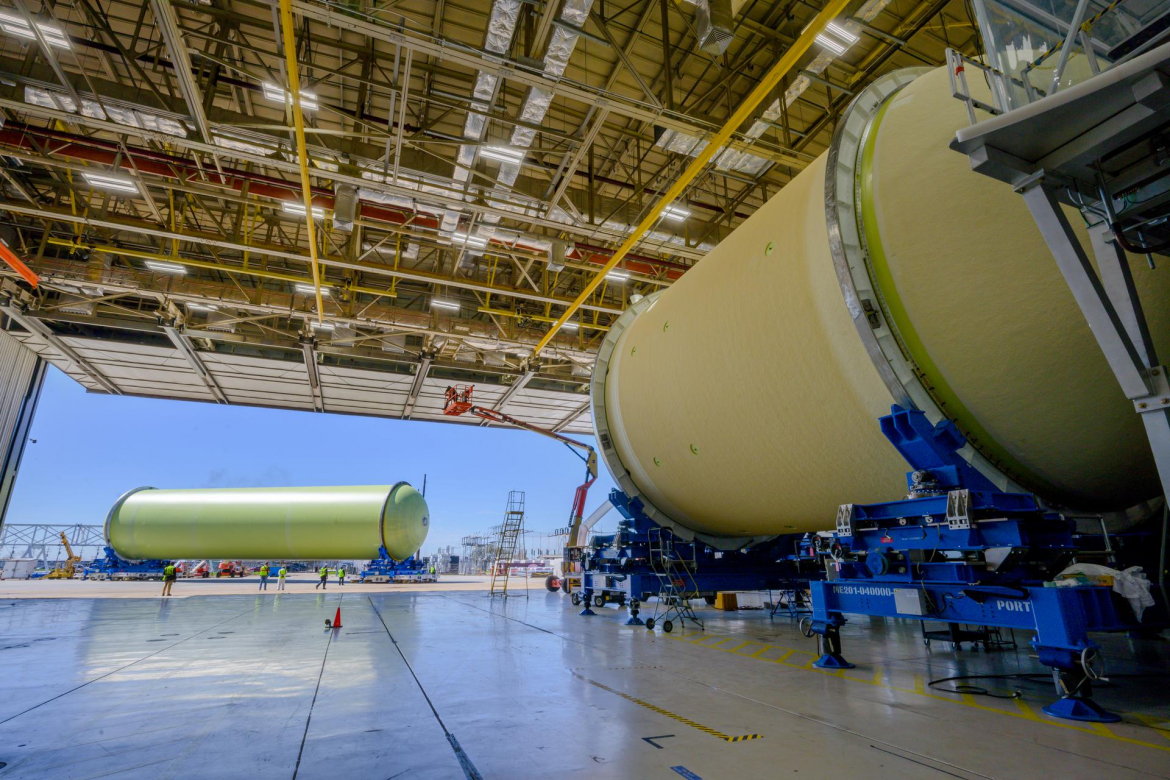 Operations for the first major join of the main elements of the second Space Launch System (SLS) Core Stage are expected to begin later in March as NASA and prime contractor Boeing work to deliver the stage in 2022 for the Artemis 2 launch.

The three elements that compose the top half of the rocket, the forward skirt, the liquid oxygen tank, and the intertank, are finishing up standalone integration and testing at the Michoud Assembly Facility (MAF) in New Orleans in preparation for being stacked in the factory’s Vertical Assembly Building.

While the top half of the rocket stage is being put together in the Spring, production and assembly also continues on the bottom two elements. Major hydraulic and pneumatic parts of the Main Propulsion System are being installed inside the engine section ,and Boeing completed spraying primer on the outside of the liquid hydrogen tank after issues during initial attempts.

Getting ready for forward join stacking

Core Stage prime contractor Boeing is in the middle of production of the second vehicle for NASA at the East New Orleans historic Michoud facility. At a high level, assembly starts with welding aluminum structural panels into barrels and domes; the full structure of the big pieces of the rocket are then welded and bolted together, followed by an integration phase were they are outfitted with their working systems.

Outfitting of the five primary elements — the forward skirt, liquid oxygen (LOX) tank, intertank, liquid hydrogen (LH2) tank, and engine section — is done separately.  In contrast to the interior of the two large propellant tanks, which are mostly empty so they can be filled with the cryogenic liquid rocket fuel, the insides of the other three “dry” elements are lined and/or filled with computers, gyroscopes, batteries, wiring, instrumentation, propellant plumbing, and other fluid systems.

Once the elements finish their standalone integration, Boeing starts putting them together, beginning with the top three elements in what is called the “forward join” or “major join 1.” The forward skirt, LOX tank, and intertank are stacked vertically first; then, after being rotated into a horizontal orientation, the LH2 tank and the engine section are attached one at a time. 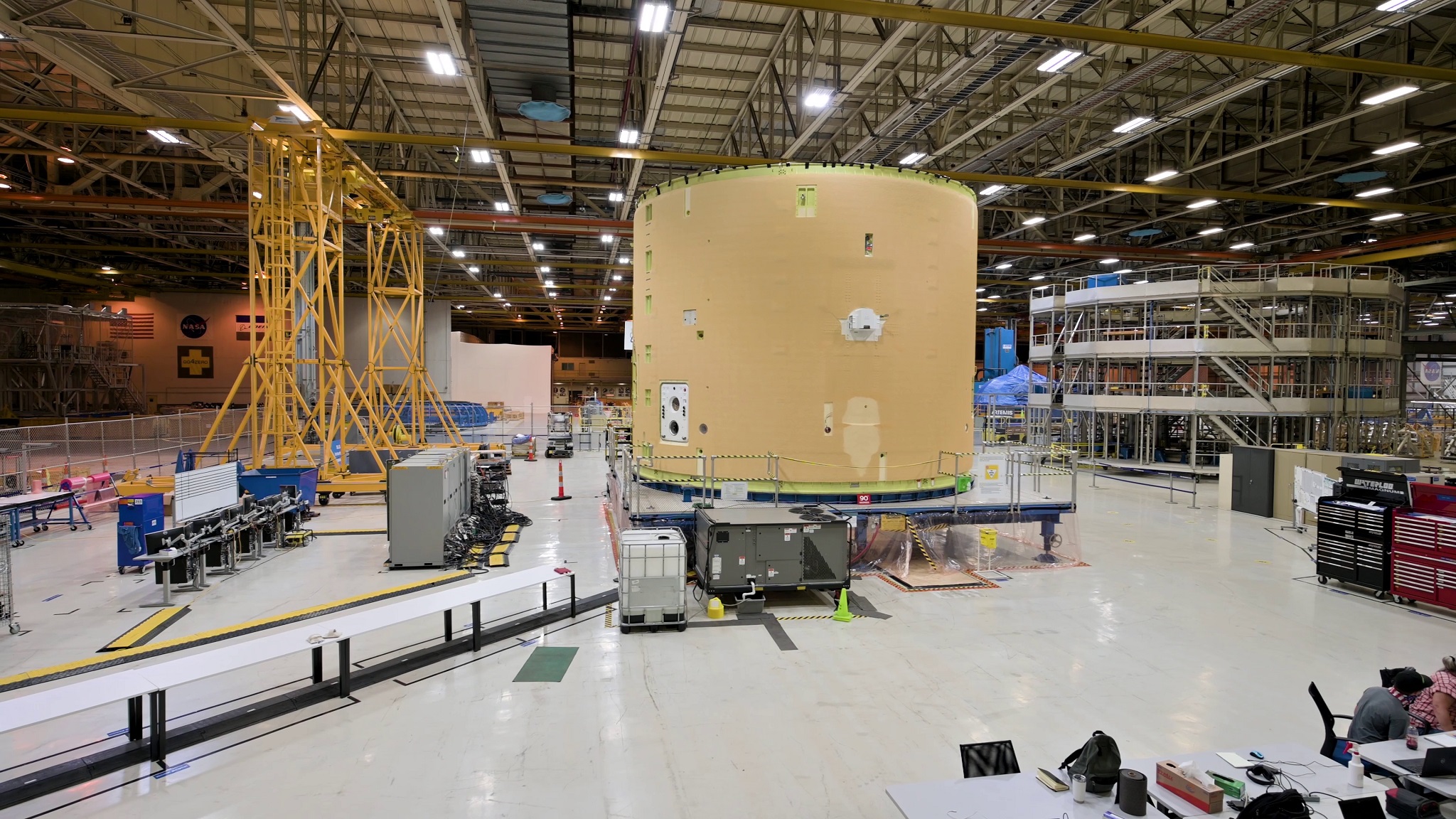 (Photo Caption: The Core Stage-2 intertank in its new integration area at MAF in September 2020. Integration, or outfitting, of the intertank and forward skirt are being moved to adjacent areas on the east side of the Building 103 floor to accommodate future expanded Core Stage production.)

Forward join operations for the second Core Stage flight article, Core Stage-2, are expected to start later this month with the top three pieces of the rocket nearing readiness to be bolted together. The two dry elements, the forward skirt and the intertank, are fully outfitted; the intertank recently concluded its standalone functional testing suite.

“They did their [intertank] break of configuration [review], so we are complete with functional test,” Ben Birkenstock, NASA’s Manufacturing and Production Lead for the SLS Stages Office, said in February 25 interview. “Test case six was the last one that we got done last week.”

A break of configuration review is held to confirm that all the required data was collected during functional testing before disconnecting test equipment and reconfiguring the flight hardware. “The next step [is] some closeout production work, so they’re doing system tunnel brackets, they’re doing some TPS [Thermal Protection System] pours that you couldn’t get done while the testing was going on,” Birkenstock noted.

“This is looking to go into major join in the middle of March.”

Additional outfitting of passive systems like purge duct installations was also in work on the intertank after functional testing was completed.

After the forward skirt and intertank panels were assembled a few years ago, the metallic structures were fully coated with corrosion-protecting primer before spray-on foam insulation (SOFI) was applied to their exterior surfaces. The next phase of production was the standalone integration they are wrapping up now; the elements were set up in dedicated work areas where miles of wiring harnesses were installed, routed, and secured to bracketry and shelves inside.

The wiring was tested to ensure it was working from end to end as operational and development flight instrumentation was installed along with the computers and avionics equipment. The three flight computers that fly the SLS vehicle during launch are located in the forward skirt while the vehicle batteries and one of the rate gyro assemblies (RGA) are located in the intertank; after all the electronic equipment was installed, standalone functional testing was performed on the elements.

The forward skirt completed its functional testing in late 2020 and is waiting to be mated on top of the LOX tank when it gets the call.

Once in Cell D, the intertank will be ready for mating with the LOX tank, which is currently going through the latest round of horizontal outfitting in Area 47/48 of Building 103, the final assembly area.

The LOX tank has received its exterior applications of primer and TPS foam in the production cells of nearby Building 131. The sump was recently installed at the bottom of the tank, which is where the two large feedlines will eventually connect to deliver the oxidizer from the tank down to the four RS-25 engines that will eventually be installed in the bottom of the stage.

“We were able to get the LOX sump on in the vertical, and then we broke it over and brought it in here [final assembly] for final closeouts,” Birkenstock noted.

“That [work] scope includes the sensor mast internal install as well as the [tank] covers, and then we’ve got some sensor islands and some instrumentation around the outside that we’ve got to install before we go put it on top of the intertank.” 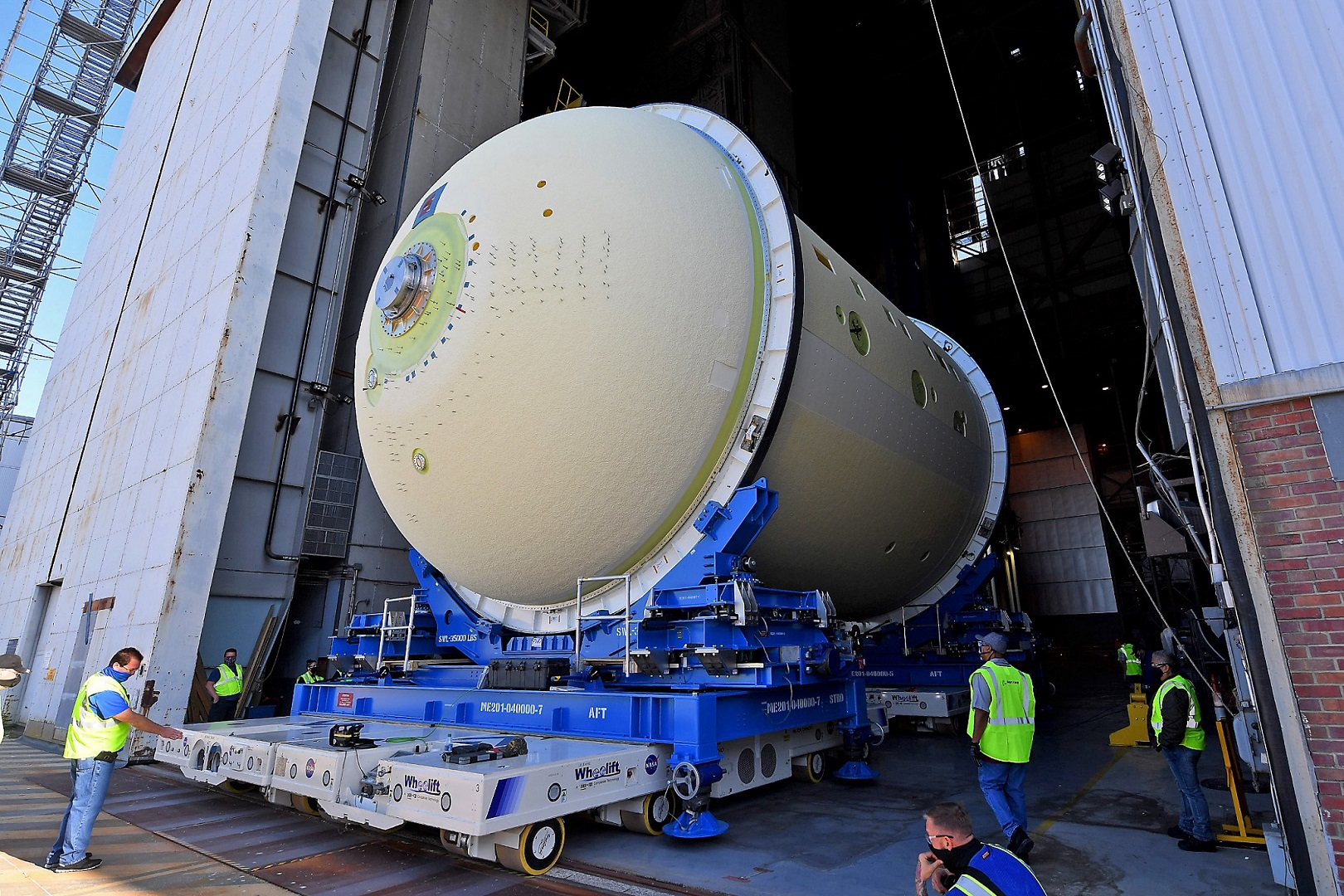 (Photo Caption: The LOX tank for Core Stage-2 is rolled into Building 110 in November 2020. At this point, the tank had just finished receiving its SOFI in Cell N of the adjacent Building 131 and was moving into Cell A in Building 110 for additional outfitting in a vertical orientation.)

The internal sensor mast assembly has the liquid level sensors used by vehicle and ground system computers to determine how much cryogenic propellant is in the tank.  Both propellant tanks on the first two Core Stages are dotted on the outside with development flight instrumentation (DFI) sensors to collect data on in-flight environments. The sensor packages slightly protrude beyond the outer mold-line (OML) of the vehicle and are surrounded by streamlined, circular islands of TPS foam.

These local areas on the exterior of the tanks were sealed off during the full-scale foam sprays to remain accessible, but now the sensors will be installed and then the TPS foam islands will be added. Additional TPS closeouts will also be done on the recently-installed sump on the aft end of the LOX tank before it is ready for mating to the intertank.

Once the interior is configured, the cover on the forward end of the tank will be installed and the vehicle’s redundant inertial navigation unit (RINU) will also be mounted in its flight position on the forward cover.

Core Stage-2 is forecast to be completed in mid-2022 and is assigned to help launch the Artemis 2 Orion lunar mission, which will be the first crewed flight of both SLS and Orion.

The most complicated piece of the complicated rocket is the engine section; when finished, it will include avionics, wiring, sensors, propellant feedlines and valves, hydraulic systems, and other equipment that constitutes the majority of the Core Stage’s Main Propulsion System (MPS). Like the first engine section, the Core Stage-2 element will include over 150 wire harnesses, which have to be routed and clamped across the long wiring runs.

Over 5,000 clamps hold the wiring runs inside the engine section in place, and once those are laid out and secured, they will go through continuity and potential tests to make sure all the copper and the insulation of the wiring are still healthy. In addition, hundreds of sensors and test instrumentation will be spliced into the wiring.