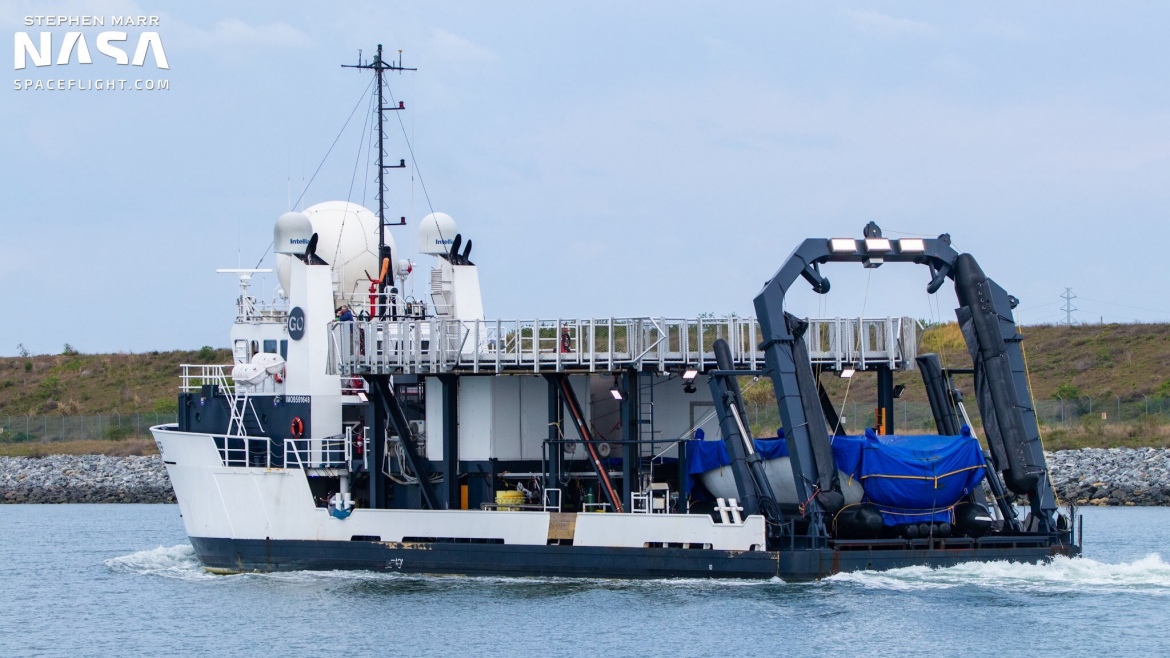 SpaceX set a company record with 25 orbital launches in 2020. All but five of these missions utilized flight proven boosters, and 14 payload fairing halves were re-flown. As the company aims to almost double that cadence in 2021, they’ll continue to rely on their recovery fleet to bring boosters and fairings back to dry land for reuse.

As of late, SpaceX has been pushing their oceangoing fleet to the limit. The company’s pair of drone ships will each return with a booster, only to turn around and leave as soon as possible to sail downrange for the next mission. Their fairing recovery fleet has also been busy, most recently with major hardware changes on the GO Ms. Tree and GO Ms. Chief vessels.

On several missions, the “Octagrabber” system on board both drone ships has made the difference between a successful recovery and losing a booster at sea. On the morning of November 19, 2020, SpaceX’s Falcon 9 core B1061 returned to Port Canaveral aboard the deck of drone ship Just Read the Instructions. Just days before, B1061 and its second stage blasted the company’s first operational crewed mission, Crew-1, to orbit.

As B1061 appeared over the horizon, it was immediately noticeable that something was wrong. As the drone ship neared port, it became apparent that the booster was secure on the deck but leaning almost 10 degrees.

Around one month later, core B1051, which had just supported the SXM-7 mission, arrived in port with a similarly dire lean. This time, the lean was so bad that one of the booster’s four landing legs was not even resting on the drone ship’s deck.

A tale of two missions, Fleet style.
As GO Ms. Tree departs for Starlink, JRTI is being led in by Finn Falgout with B1061.1 on-board. This windy day is creating a rough sea state that just may be the reason for the lean we are seeing. pic.twitter.com/B8o1aLUbjq

Often battered by high seas, howling winds, and raging storms, the drone ships and their recovery crews face a difficult task during the several day journey to and from recovery zones at sea. Landed boosters are kept secure thanks to a massive white robot dubbed “Octagrabber.”

Originally, SpaceX recovery technicians would have to board the drone ship after a Falcon 9 landing in order to secure the first stage to the ship’s deck using jacks and chains. Octagrabber, on the other hand, is operated remotely.

Recovery technicians still board the drone ship after landing to verify Octagrabber’s fit and clearances, check for hazards, and then secure the tow line so the ship can be towed back to port. A similar boarding occurs pre-launch to disconnect the tow line, allowing the tug and support vessels to retreat to a safe distance for the landing.

At night time or in hazardous seas, recovery crews must wait until daybreak to board the drone ship and prepare it for the return to port. This is why it can take longer for the booster to return after night launches or landings in suboptimal weather.

Those weather conditions demand a balancing act between expanding the flight envelope and ensuring a successful recovery as SpaceX relies on flight proven boosters to deploy the large Starlink satellite internet constellation.

When not needed to secure a booster, Octagrabber rests safely in its garage, hidden behind the drone ship’s blast wall.

The robot hero of Falcon 9 B1061.1's recovery – Octagrabber – is heading back into its garage after a job well done holding on to the booster on the Drone Ship JRTI.

After a landing, Octagrabber rolls on its two massive treads from its garage and stops directly underneath the booster. Four arms then connect to Falcon 9’s base, called the octaweb. These arms connect to the same hold-down points used to secure the rocket to its launch pad before liftoff.

While Octagrabber is quite small compared to a Falcon 9 booster, it still provides a strong enough grip that prevents the booster from sliding or falling off the deck because a Falcon 9 is quite light after landing; now empty of fuel, most of the booster’s mass is at the bottom where the nine Merlin engines are located.

Octagrabber itself is very large and flat, providing a stable base for the rocket to be secured to versus resting solely on its landing legs.

Octagrabber first entered service in 2017 aboard drone ship Of Course I Still Love You during the BulgariaSat-1 mission; the robot successfully kept booster B1029 secure during its trip home to Port Canaveral.

Several months later, Octagrabber was deployed on the SES-11 mission in order to secure booster B1031 after landing. However, a brief fire after landing damaged the robot and the aft of the drone ship itself. The booster’s RP-1 fuel leaked onto the deck of Of Course I Still Love You and was ignited during a routine purge of the booster’s Triethylaluminum-Triethylborane (TEA-TEB) ignition source. 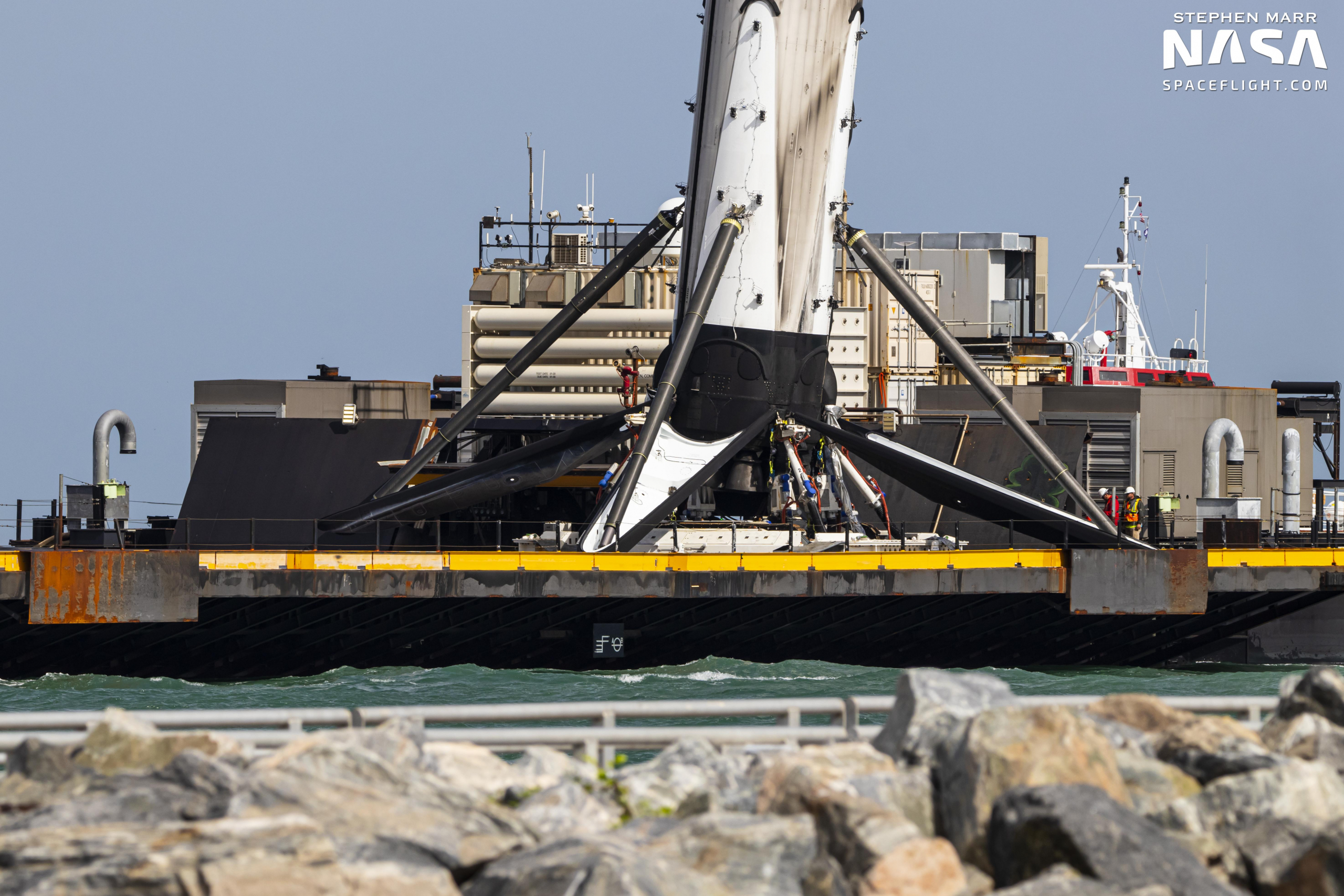 After half a year of repairs, Octagrabber finally returned to normal service during the Transiting Exoplanet Survey Satellite (TESS) mission for NASA.

Originally, Octagrabber was not compatible with Falcon Heavy center cores, as they feature a slightly different hold-down system. After the Arabsat-6A center core was lost at sea however, the robot received a design change to accommodate both types of boosters.

After SpaceX moved Just Read the Instructions from the west coast of the U.S. to the east, both drone ships were given an updated Octagrabber design.

A new feature of this “Octagrabber 2.0” involve recovery operations at Port Canaveral. After ocean recoveries, Falcon 9 rockets were previously offloaded from the drone ship to a stand on the dock, where the booster’s legs are then folded. Following the Demo-2 mission in May 2020, however, booster B1058’s legs were folded while the booster still stood on the deck of Of Course I Still Love You,  supported only by Octagrabber.

This process is not always used in port but proves the company is still attempting to accelerate recovery and reuse operations. Faster booster turnarounds and more reliable recoveries at sea are essential to SpaceX’s growing launch manifest in 2021 and beyond.

A third drone ship, A Shortfall of Gravitas, is planned to join the booster recovery fleet at some point in the future. While there has been no official word on construction progress, the vessel will enable additional recovery plans for SpaceX’s Falcon 9 and Falcon Heavy missions.

A Shortfall of Gravitas could be used at Cape Canaveral alongside the original pair of ships for Falcon Heavy triple drone ship recoveries or a more rapid launch cadence. Alternatively, it could enable one of the three drone ships to relocate to California in support of landings downrange from Vandenberg Air Force Base.

As of late, it appears as though the company is pausing catch attempts for fairing halves, focusing entirely on scooping flown fairings out of the water. A fairing half has not been caught since the Starlink v1.0 L13 mission in October 2020, and water recoveries have been conducted on 11 of the 12 fairing flights since (excluding Dragon missions).

In late-February, both of SpaceX’s dedicated fairing recovery vessels — GO Ms. Tree and GO Ms. Chief — were taken out of service for extensive modifications. Both ships are undergoing removal of all four of their main “catching” arms, which normally support a net used to catch fairing halves. It is currently unknown whether or not the ships are permanently losing their arms or just require maintenance after their constant use throughout 2020.

Ms. Chief has had her final arm removed and it looks very strange!

In the meantime, Dragon recovery ships GO Navigator and GO Searcher have been assigned to fairing recovery duties for the foreseeable future. The duo has recovered floating fairing halves in the past, such as during the Arabsat 6A mission in April 2019.

SpaceX has also taken another step to optimize its payload fairings for water recovery. Starting with the Starlink v1.0 L15 mission last November, SpaceX has slightly modified the vents on its fairing halves flown on internal missions, meaning all following Starlink flights and the Transporter-1 rideshare mission.

These small holes — standard on every Falcon 9 fairing — allow the pressure inside to decrease as the rocket ascends, maintaining equal pressure with the outside atmosphere. They are protected by covers that tear off as the rocket flies through the air.

Note the tiny vents on the fairings–usually placed evenly around the halves, these ones are likely positioned to be out of the water when the two halves splash down. (previously tested on Starlink v1.0 L15 in November) https://t.co/aMGugiXjSc

The company has moved the vents closer to the “seam” between the two fairing halves so that water is less likely to enter the fairing through the holes when the halves are floating in the ocean.

SpaceX recently accomplished its first 4th flight of a fairing during the Starlink v1.0 L17 mission. While perhaps less exciting than the net catches of Ms. Tree and Ms. Chief, scooping fairings from the ocean appears to be a viable recovery strategy, as even a paying commercial mission, Turksat-5A in January 2020, flew with a fairing half that had previously landed in the water.

Whether water recovery becomes normal or catch attempts make a return, SpaceX has experienced success in their fairing recovery program. This, along with booster recoveries enabled in part by the Octagrabber robot, are crucial to the company’s launch cadence aspirations in 2021 and beyond.

(Lead photo: Fairing half on board GO Searcher after the Starlink v1.0 L17 mission – via Stephen Marr for NSF)