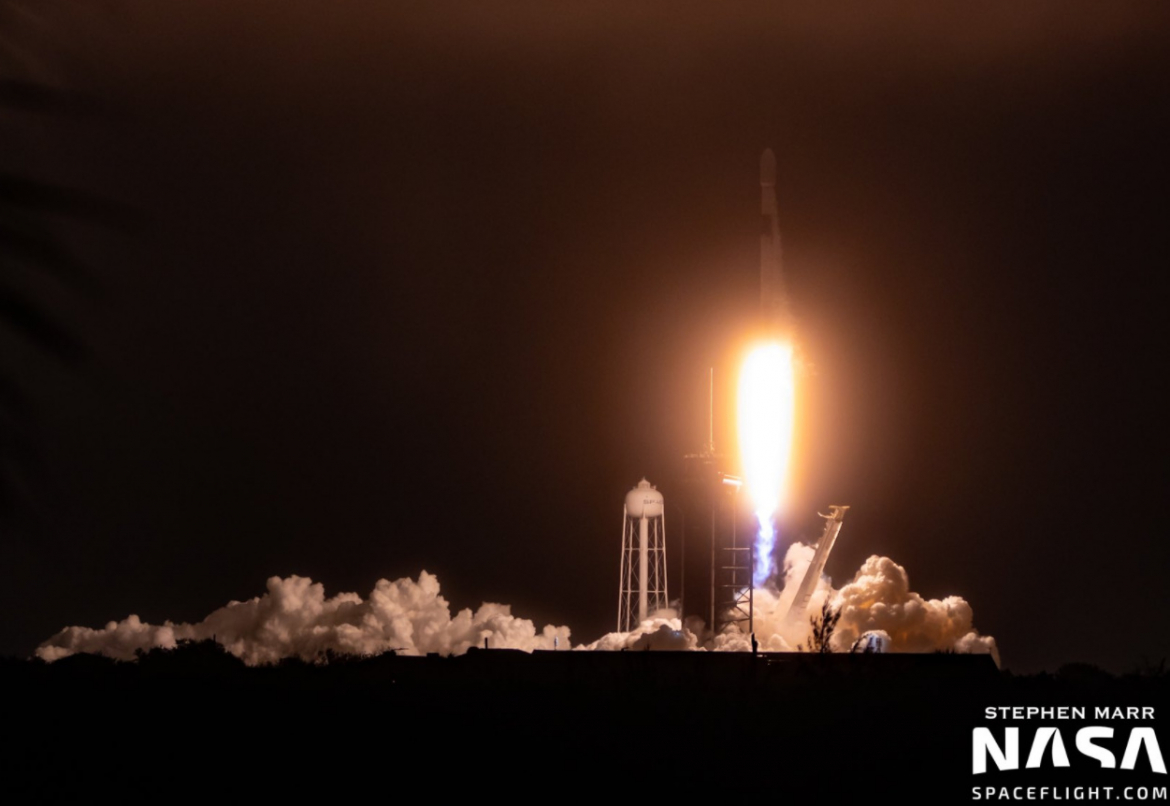 SpaceX launched the Starlink v1.0 L17 mission with a new batch of Starlink satellites from historic LC-39A at the Kennedy Space Center aboard a flight proven Falcon 9 booster Thursday morning.  The previous launch attempt on Sunday, February 28 ended in a scrub at T-1 minute 24 seconds.

Falcon 9 launched at 03:24 EST (08:24 UTC) with the booster successfully landing on the drone ship Of Course I Still Love You.

Due to technical, weather, and droneship-related delays, Starlink v1.0 L17 found itself launching after the L18 and L19 missions. This was the first time that a Starlink mission was launched “out-of-order,” but it was far from a first for spaceflight in general; the Space Shuttle program was frequently filled with seemingly confusing mission numbers.

After many delays, this mission was finally poised for launch on February 17, but was again postponed after booster B1059 failed to land after the Starlink v1.0 L19 mission.

During the 47th Spaceport Summit on February 23, SpaceX’s outgoing Vice President of Mission Assurance, Hans Koenigsmann, cited “heat damage” as the root cause of the unsuccessful recovery, but declined to disclose any further details. It was later revealed that a hole in the boot of one of the engines had a hole that caused an engine to shut down during first stage flight and caused the heat damage, in turn impacting on the entry burn.

Following Starlink v1.0 L19’s landing failure, and after the almost month-long launch delay after the previous static fire, SpaceX opted to complete another static fire test on February 24 at 03:00 local time. Several hours later, the company confirmed it was a success.

With its payload already integrated—as is standard on Starlink missions—there was no need for Falcon 9 to roll back to its hangar and receive its payload prior to launch.

Just 38 minutes before launch, SpaceX’s Launch Director confirmed that the Falcon 9 team was “go” for propellant loading, which started three minutes later and continued until the final minutes of the countdown.

The nine Merlin 1D engines on Falcon 9’s first stage were thermally conditioned for ignition at T-7 minutes, a milestone known as engine chill. Falcon 9 entered startup at T-1 minute, when the onboard computers pressurized the propellant tanks to flight levels and conducted final pre-flight checks.

After lifting off from LC-39A, Falcon 9 began its pitch and roll maneuvers to target a 53 degree inclined orbit, flying northeast from Cape Canaveral.

Following stage separation at T+2:35, the first stage reoriented itself for landing, with a decelerating entry burn at T+6:41.

At 8 minutes and 28 seconds after launch, the booster completed a final landing burn and touched down on the deck of Of Course I Still Love You. This was the first Falcon 9 landing attempt after a failed recovery on the v1.0 L19 mission broke a streak of 24 straight successful landings. 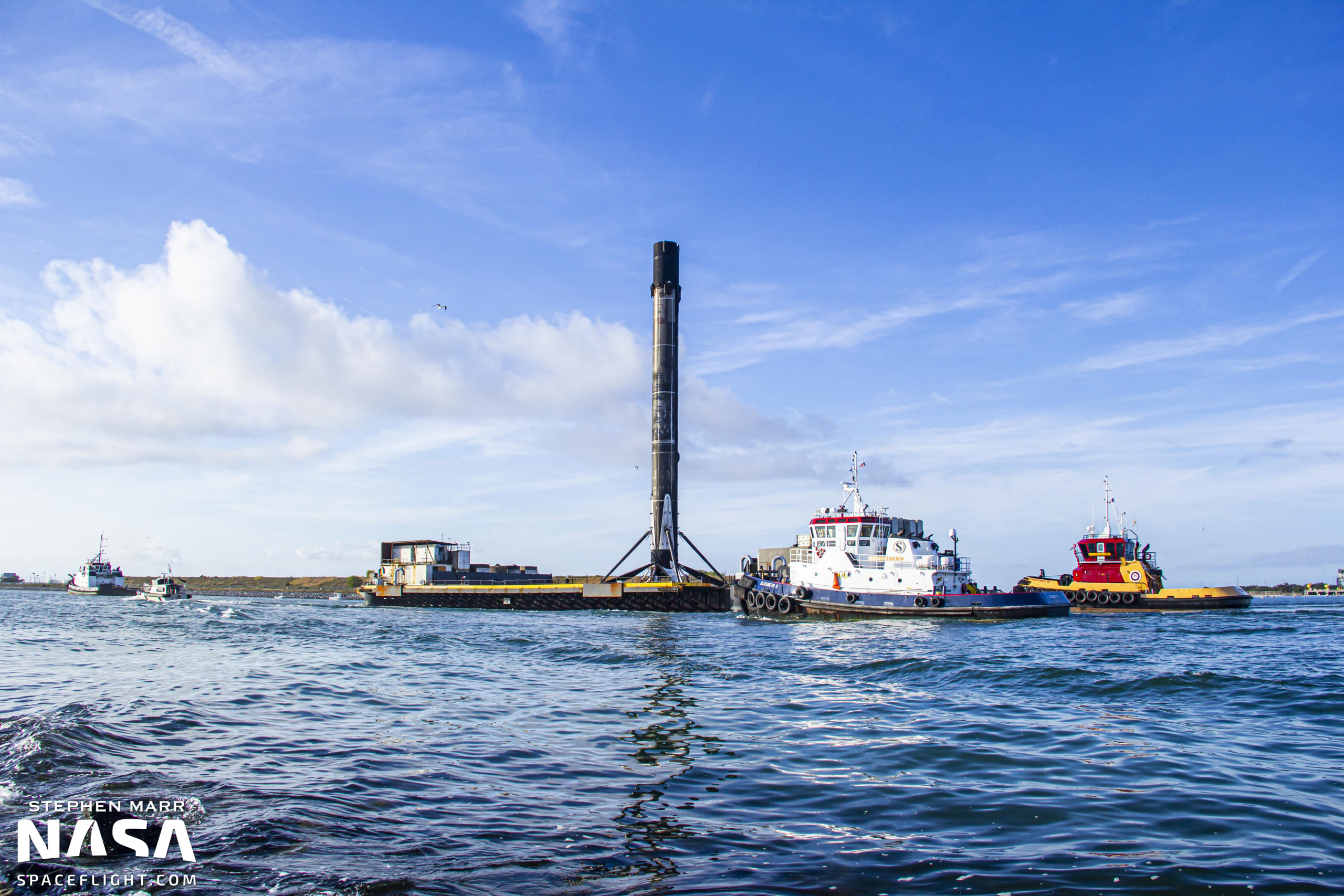 Falcon 9 B1051 returns to Port Canaveral aboard Just Read The Instructions following the Starlink v1.0 L16 mission – via Stephen Marr for NSF/L2

The second stage utilized two burns of its Merlin vacuum engine to reach the targeted insertion orbit. After its first burn, the stage coasted for about 40 minutes. It then performed a short, one second long burn to reach a roughly 250 by 290 kilometer orbit.

Deployment of all 60 Starlink satellites took place at around 1 hour and 4 minutes after launch.

After deployment, the satellites will then take several weeks to reach their final 550 km circular orbits using their Krypton-powered ion thrusters.

SpaceX selected veteran core B1049 for this launch: the oldest booster in the fleet. With a 100 day turnaround from its last mission, this booster tied the fleet record for the most flights at eight—a record previously held by B1051, which will likely make its ninth flight sometime later this month.

This launch will also featured reused fairings—both halves from previous Starlink missions. The active half—the side that faces away from Falcon 9’s transporter erector tower—was making the first fourth flight of a fairing half, and likely supported the Starlink v0.9, v1.0 L5, and v1.0 L12 missions, while the passive half likely flew on the Starlink v1.0 L3 and L10 missions.

Around 45 minutes after launch, recovery ships GO Searcher and GO Navigator scooped both halves from the water following their splashdown around 707 kilometers downrange from the launch site.

The dedicated fairing recovery vessels, GO Ms. Chief and GO Ms. Tree, have been undergoing maintenance work including removal of two each of their arms. SpaceX has experienced success with recovering fairings after splashdown, but a fairing half has not been caught since the Starlink v1.0 L13 mission in October 2020.

SpaceX plans to launch the Starlink v1.0 L20 mission as soon as March 7 from SLC-40 at the Cape Canaveral Space Force Station. Further Starlink missions will likely continue throughout March and April until the next scheduled launch for an external customer, the NASA Crew-2 mission on April 20 from LC-39A.

As SpaceX continues to deploy more satellites, the expanding beta program has allowed more users to begin using Starlink for internet access. Elon Musk tweeted that improvements to speed and latency are expected later this year.

Musk also mentioned that testing of those upgrades is underway, saying users “might see much higher download speeds on Starlink at times.”

The Starlink constellation is on track to provide connectivity to most of Earth by the end of 2021 and complete global coverage in 2022, followed by densifying coverage to complete the initial constellation.

Starship SN10 successfully lands before RUD’ing on the pad