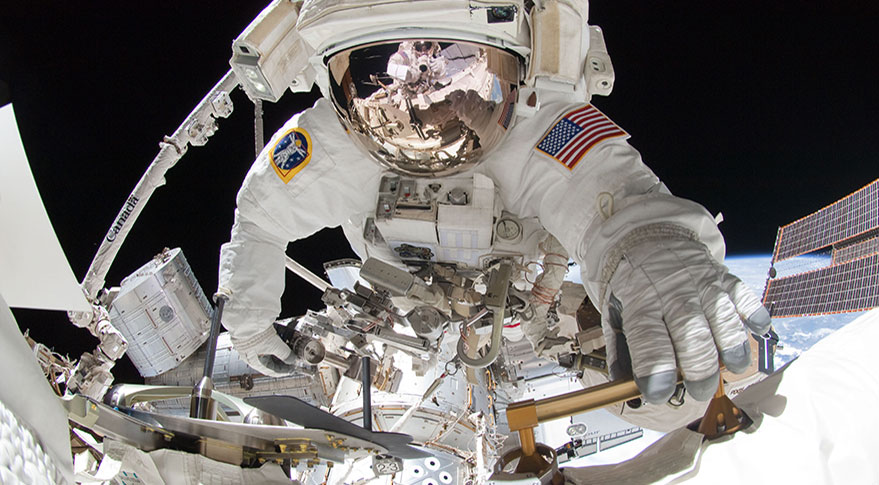 The spacewalk ended with the major tasks completed but the lesser tasks deferred to a future spacewalk when work at the solar array site took longer than planned and spacesuit battery limits mandated a conclusion to the EVA after 6 hours 56 minutes.

Developed by Deployable Space Systems of California, the IROSAs roll out in a mat-like manner from inside a cylindrical canister.

Its solar cells are mounted on a very thin, flexible blanket rather than traditional rigid panels, and it features a composite boom which adds rigidity and allows for deployment without the use of motors or complex mechanisms.

This allows the large arrays to be stowed very compactly — which is important given the current launch options available to the Station program.

The IROSAs will be installed over six of the Station’s existing solar arrays.  Although the IROSAs will partly shadow the existing arrays, the original arrays will still continue to generate power alongside the IROSAs.

Each IROSA will produce 20kW of additional power, for a total of 120kW across all six arrays.  The unshadowed portions of the original arrays will continue to produce 95kW, making for a combined total of 215kW of power which will be available to the Station, close to its original level.

This is an increase of nearly a third compared with the outpost’s current 160kW of available power.  When combined with the recently completed effort to replace the Station’s batteries with new Lithium-Ion units, this will ensure the ISS has adequate power to support its increasing demands throughout the remainder of its life.

A sub-scale version of the IROSA was successfully tested on Station in 2017, and the technology is already planned for use on the Power and Propulsion Element (PPE) of the Lunar Gateway, as well as on Dynetics’ Human Lander System (HLS), for the Artemis Moon program.

The six IROSAs will be launched two at a time on a pallet inside a SpaceX Cargo Dragon 2 trunk starting with the CRS-22 flight in June 2020.  The new arrays will be installed via spacewalks

The IROSAs will be structurally mounted to the base of the Station’s existing Mast Canister Assemblies, which housed the current arrays during launch and now serve as their “base”.

However, as it was never envisioned that the IROSAs would be added to the ISS, no structure existed on which to mount them.

Constructing this was the goal of U.S. EVA-71.

A so-called “mod kit” was installed onto the 2B Mast Canister Assembly, consisting of several struts which were connected together to form a structural framework for the IROSAs to be mounted on in future.

The “mod kit” that will be constructed and installed onto the Mast Canister Assemblies. These kits will serve as the attachment platforms for the new arrays. (Credit: NASA)

The first task for the spacewalkers after translating out to the P6 worksite, carrying some very large work bags with them, was to construct an A-frame structure called the upper bracket, which was in turn mounted to the center of the 2B Mast Canister Assembly.

This completed the 2B mod kit installation.

Another upper bracket was then constructed and attached to the 4B Mast Canister Assembly, as was the right lower strut.

This is where the spacewalk concluded.

Completion of the 4B Mast Canister Assembly mod kit was performed on U.S. EVA-72.

For U.S. EVA-72, Kate Rubins and Soichi Noguchi translated out to the P6 truss worksite.

Once there, they began their first task, which was to complete the build of the 4B mod kit which was begun on the previous EVA. Some tricky bolts presented a challenge on that spacewalk, so the duo attempted to tighten those bolts along with completing the assembly of the support bracket structure for the future IROSA.

Similar completion work was accomplished on the 2B side.

The next task was to have been the venting of the Early Ammonia Servicer jumpers so they can be safely stowed without the risk of rupturing due to thermal expansion. However, the IROSA work took longer than planned, and battery limits on one spacesuit caused Mission Control to ask the pair to return to the Quest Airlock to evaluate further tasks.

Once at the airlock, Mission Control concluded that a planned task of replacing a failed Wireless External Transceiver Assembly — which is an external wireless video data relay — at Camera Port 12 on Node 1/Unity could not proceed due to battery limits; however, Soichi did have time to retrieve an APFR (Articulating Portable Foot Restraint).

Of the tasks left uncompleted were venting of the ammonia servicer, the above-mentioned wireless transceiver work, and routing of two ethernet cables along the aft side of the P1 truss to Camera Port 9 in preparation for future wireless access point and High Definition external video camera installations. 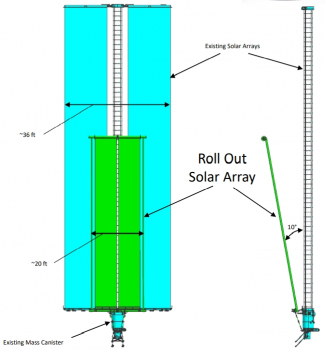 Troubleshooting the P1 and P2 truss PAPOS (Payload Parking Position Interface) power connectors on the new Bartolomeo external platform on the European Columbus module was not completed as well.

These connectors were unable to be properly mated on a previous EVA, and the crew will attempt further steps to mate them, which involves inserting a pen-like tool to spread apart the pins in the connectors, which are believed to be too tight.

It was initially planned that an external 360-degree Virtual Reality camera called ISS Experience would be used to capture external imagery of the EVA; however, the device was unable to be powered up.

Despite being brought back inside the ISS and troubleshooted by the crew, the issue was unable to be resolved, meaning the camera will not be available for the EVA.

A small, pinpoint hole was discovered in one of Kate’s gloves during the spacewalk; however, no leak was detected from her suit and the small hole was not the reason for concluding the spacewalk with taks left to accomplish.